United, One Goes Further - France as One

Written by Nicolas Messner on 10. Oct 2021
Photographs by Gabriela Sabau, Marina Mayorova
Share
'Alone we go faster, but united we go further,' could be the motto of a mixed team competition like the one that took place in Olbia on the last day of the World Junior Championships. 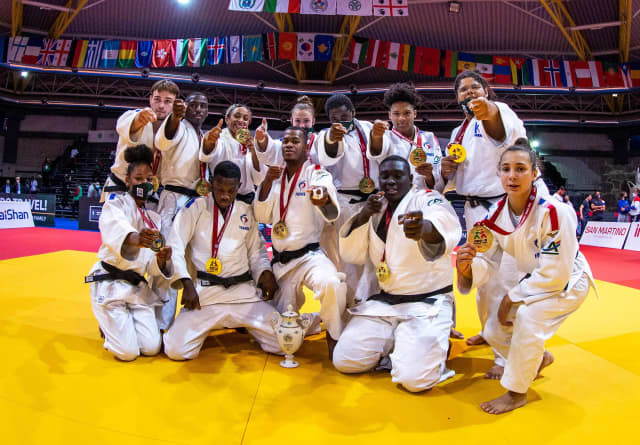 Sunday 10th October, everyone had to change the hardware. When the mixed team tournament arrives, it is not the same. The concept does not change, of a tatami, two opponents and a winner, but here there are second chances, even third ones. In individual competitions judoka depend on themselves, for better or for worse. The team competition has a safety cushion; a defeat does not mean elimination. That’s what the teammates are here for: to correct a stumble. The difference is that, when competing alone, losers lick their wounds alone. In teams, there is no fear of losing but of disappointing teammates and that is the beauty of it, because everyone comes out with more ambition and fury than usual. It is the magic of the teams, a modality that has come to stay because it motivates and everyone likes it.

At 10am today, one could immediately notice that the sound level in the arena had risen dramatically. There was only one reason for this: during every single match, entire teams, including competing and non-competing athletes, coaches and physiotherapists, were cheering and supporting from the stands. it must be said that within a performing team, there are the individuals, the team itself and the atmosphere that is generated by the whole group. This third element definitely plays an important role when it comes to adding the extra energy that is necessary to move mountains.

Even if France and Russia were the top seeds and therefore the favourites and even if they actually reached the final, nothing was written in advance and everything was possible. This is when uncertainty produces beauty. In each round the two finallists faced difficult moments. They couldn't just say 'oh we're going to win with ease.’ This never really happens in the team events. Because they are teams and not just groups, France and Russia overcame all the challenges.

Final: France vs Russia - France as One

Joan-Benjamin Gaba already fought zillions of matches today, with long golden scores and a lot of energy left on the tatami. In the first bout of the final he was opposed to Saikhan Shabikhanov in what quickly looked like an intense match and it was. Attacks were coming from both sides, the two athletes always, at the very last moment, managing to escape from unbelievable situations. 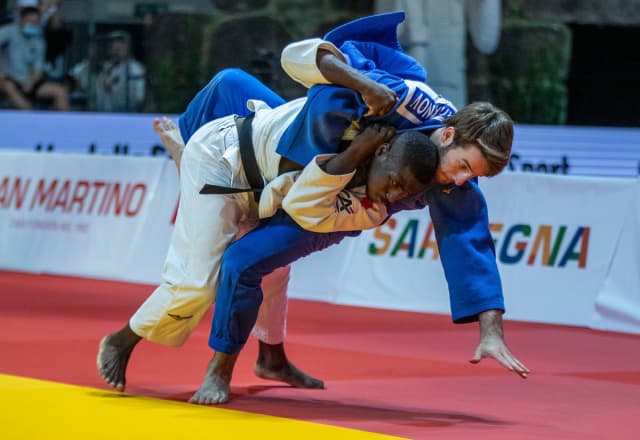 Step by step the French judoka seemed to take advantage over his opponent, who was penalised. After a long golden score, Saikhan Shabikhanov received a third shido that gave the point to Gaba and France, but what a match! 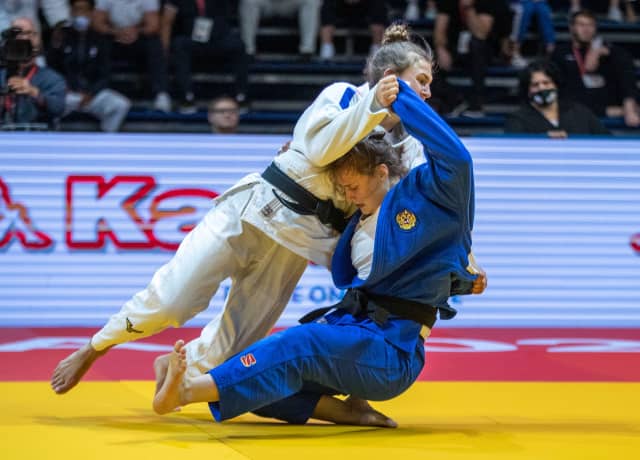 Mélodie Turpin and Francis Damier quickly gave two more points to team France, both winning by ippon, before Coralie Hayme, the new heavy weight world champion, stepped on the tatami aigainst Alana Alborova. With one gold medal already medal in her pocket after the individual tournament, Hayme still had some pressure on her shoulders, to confirm her results from the day before and to give the victory to her delegation. 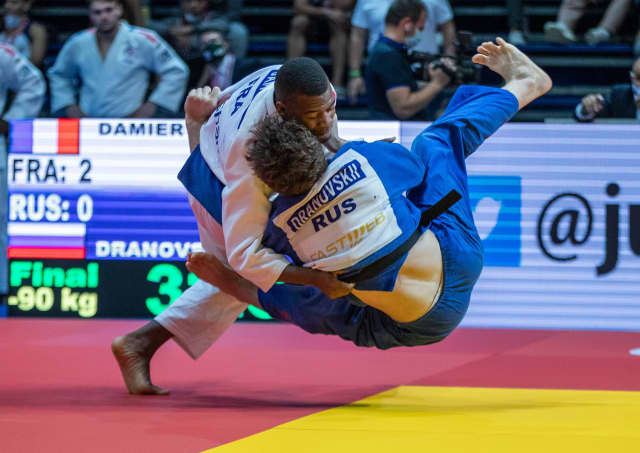 She succeeded with both. After a confused sequence, Hayme landed on her opponent. She didn't let the chance pass by and she pinned Alborova to give the fourth point to France. The juniors being world champions now, after their elders became Olympic Champions a few months ago, France confirm they are more than just a group of athletes, but definitely a real team with an incredible team spirit. It is definitely because they are united on and off the tatami that they can go way further than any other delegation for the time being. 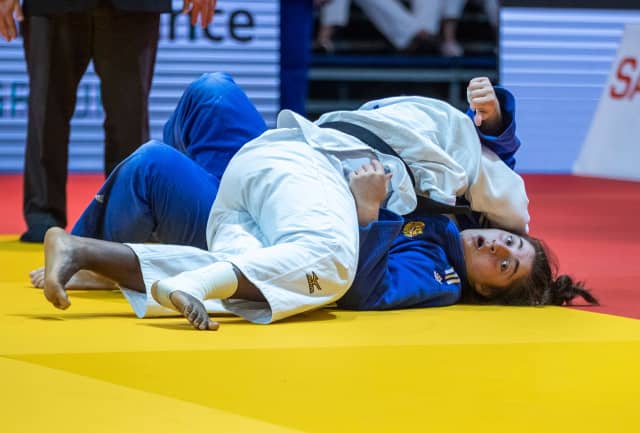 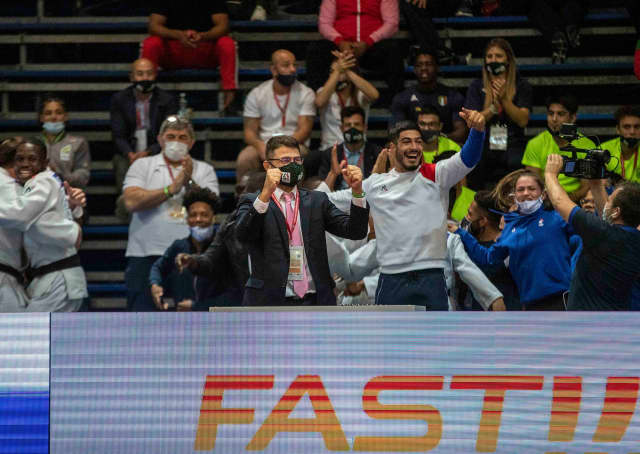 Ukraine vs Germany: With Will and a Bit of Luck, Germany Wins Bronze

After more than 7 minutes of golden score, Rostyslav Berezhnyi brought the first point to Ukraine, Jano Ruebo (GER) having been penalised three times. Nataliia Chystiakova won the second point for Ukraine after defeating Friederike Stolze at -70kg, with a waza-ari score via a counterattack and the a few seconds later she pinned the German judoka for ippon. A third point for team Ukraine was not long to follow, with Tymur Valieiev winning against Fabian Kansy. Still everything was still possible as Germany had already one point, from Ukraine missing an athlete in the -57kg weight category.

It was the turn of Ruslana Bulavina and Anna Monta Olek to step on the mat. The mission of the new German world champion was simple: win! She did it in style, with a first waza-ari and an osae-komi-waza for ippon. When Losseni Kone won the third point for Germany, the teams were tied 3-3. It was time to draw a category to know who the winner would be. Unfortunately for Ukraine, -57kg was drawn and Germany won the bronze medal.

Hungary vs turkey: Turkey Steps Onto the Podium in Olbia

The first point went to Turkey, with Umalt Demirel executing a beautiful uchi-mata for ippon against Botond Toth. Szofi won all her matches today until the bronze medal match and then she did it again against Habibe Afyonlu, after the latter was disqualified for applying a forbidden technique. 1-1.

Peter Safrany of Hungary is the new world champion in his category, but twice today he lost matches that he should have won, based on his level. This time Omer Aydin threw him for waza-ari and controlled the rest of the bout to bring one more point to Turkey. The third point for Turkey came straight after, with Hilal Ozturk pinning Szilvia Farkas for ippon.

Richard Sipocz did not show great judo through the morning, but for a bronze medal everything is possible and he threw Munir Ertug with a massive one-handed sode-tsuri-komi-goshi. Anna Kriza could then not do anything to stop Ozlen Yildiz from scoring the last point for Turkey, to win the mixed team second bronze medal.