Written by Mark Pickering, Gabriela Sabau on 02. Oct 2018
Share
We picked out 5 key takeaways from eight days of competition at the 2018 World Judo Championships in Baku, Azerbaijan.

1. Japan is simply untouchable in the team event

Japan has always excelled in team judo with this particular discipline being a key component of the domestic scene in all groups and with their sheer skill level and strength in depth.

Since the format was amended last year to mixed teams with three men and three women, Japan have arguably tightened their grip of the world team judo.

Japan lost two contests last year on their way to the final where they demolished Brazil 6:0 in the final. This year they brushed aside the unified Korean team 4-0 after dismantling Mongolia 4-0 and beating hosts Azerbaijan 4-2. In the final Japan strolled past France 4:1. 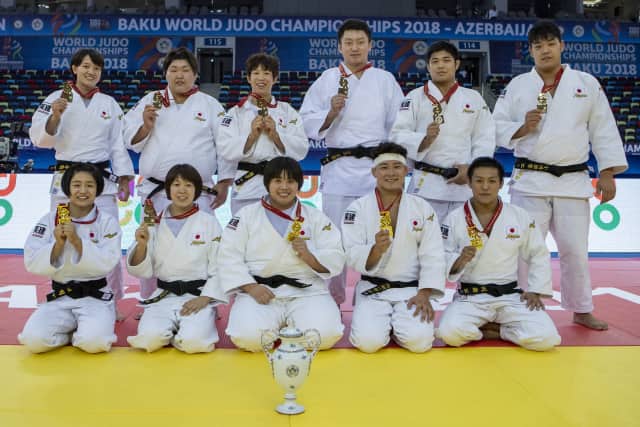 In addition to now winning the first and second edition of the World Team Championships – with, ominously, one edition left next year in Tokyo before the Olympics – they did so while their two active Olympic champions were sat at home.

Ono Shohei (-73kg) and Baker Mashu (-90kg) watched the action on television having been instead picked for the Asian Games in August where they won gold and bronze respectively.

The Japanese mixed team will be even stronger at the next edition of the World Championships in Tokyo, Japan. At the Tokyo 2020 Olympics it could even be considered a surprise if they lose a single contest in the team event with the host judo team being without question the strongest favourites for gold of Japan’s entire Olympic team.

2. Georgia’s Guram Tushishvili is now the man to beat

World number one and World Judo Masters gold medallist Guram Tushishvili (GEO) delivered on the biggest stage of his career to ensure that the men’s heavyweight crown switched hands for the first time since 2007.

Tushishvili, 23, who will become the first male heavyweight to wear a red backpatch, led the way for Georgia with their one and only gold medal in Baku. 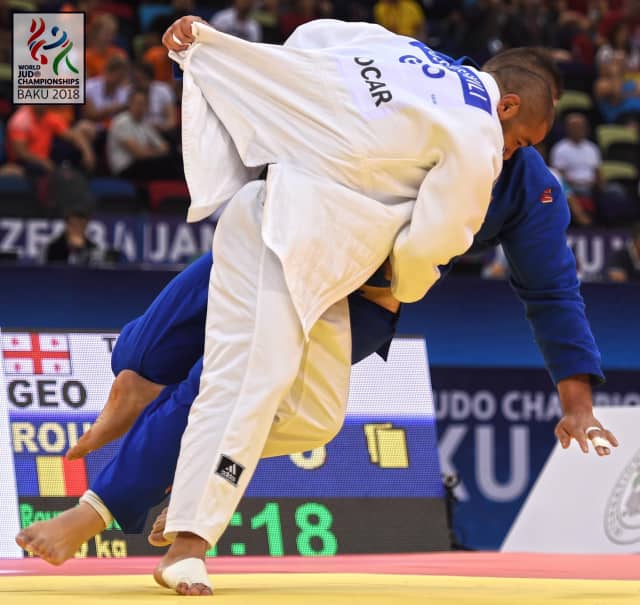 The man who gave 10-time world champion and double Olympic champion Teddy Riner (FRA) his greatest fight in over a decade last year at the 2017 Worlds showed a new level of maturity in Baku.

Tushishvili, who is pound-for-pound one of the most exciting judoka in the sport, proved himself as the best active heavyweight judoka on the planet. While heavyweight and Olympic medallists fell around him, and the weight of expectancy on his bulky shoulders from his team increased with each contest, Tushishvili stayed cool and took his day one fight at a time.

The Georgian superstar won all five of his contests by ippon and now stands alone as the undisputed best judoka in the gentle way in the heavyweight division.

The world is now eagerly awaiting a third instalment of the thrilling Tushishvili against Riner rivalry which this time would pit the reigning world champion against the current Olympic champion.

Brother and sister Abe Hifumi and Abe Uta (JPN) won world titles simultaneously on the second day of the World Championships. The poster boy and poster girl of the Tokyo 2020 Olympics would have finished third in the medal table if they entered as the Abe family. 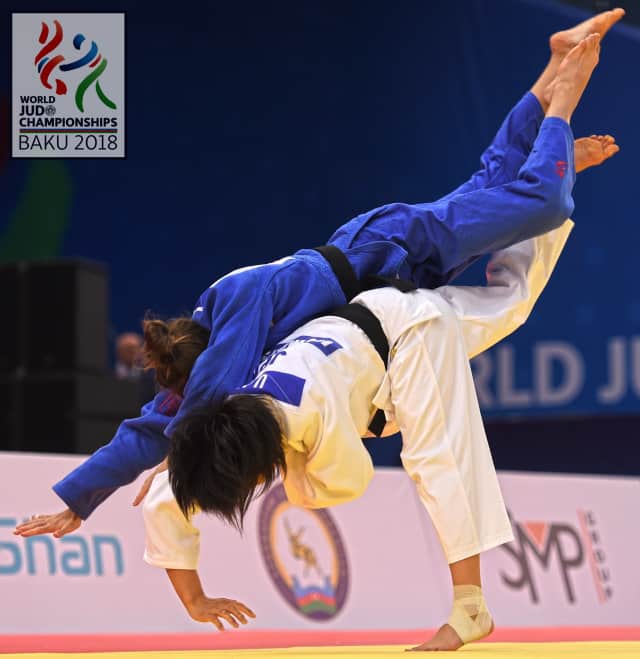 On day one 17-year-old Daria Bilodid (UKR) ruthlessly dispatched all five of her opponents to achieve judo stardom. The Ukranian hotshot was headline news all over the world after becoming the youngest world champion in the history of the sport ahead of Tani Ryoko and Teddy Riner who were both 18. 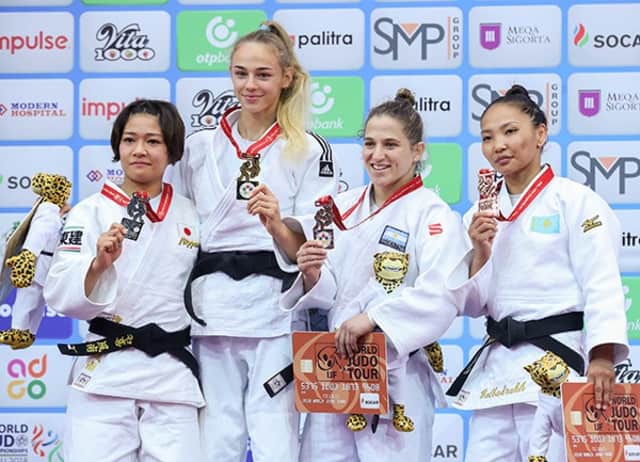 All female world champions in Baku were 25 or under except -78kg winner Hamada Shori (28). The average age of the seven winners was 22.1.

Out of the 14 gold medallists, 10 were first-time world champions with France’s Clarisse Agbegnenou, Japan’s Arai Chizuru, Takato Naohisa and Abe Hifumi all repeating their 2017 victories.

Judo is more than a sport. This is not a gimmick but a fact. Judo is an education tool, a martial art, an Olympic and Paralympic sport and a means to develop societies through programmes such as Judo for Peace and Judo for Children.

The World Championships brought together 755 athletes from 124 different countries.

Among those judoka were members of both Korean teams who joined together to form a unified Korean side for the team event. The historic feat was a first in judo and had a fairytale ending as the world-class members of the joint team won bronze. 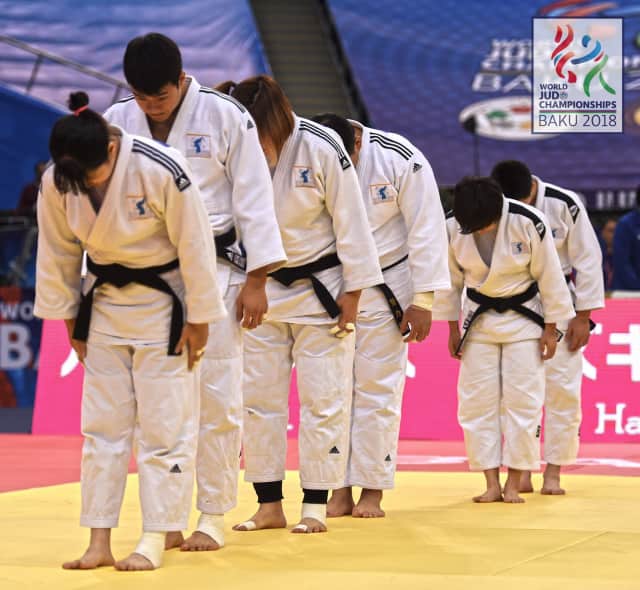 The Unified Korean team bows before their opening match

It’s worth noting that all other participating countries had to approve the participation of a joint Korean team and for the team to retain the seeded status previously secured by the South Korean team. They did so with unanimous support.

The unified Korean team's interactions and team spirit was natural and illustrated judo’s moral code and chiefly the value of friendship which is the theme for #WorldJudoDay 2018 on 28 October. 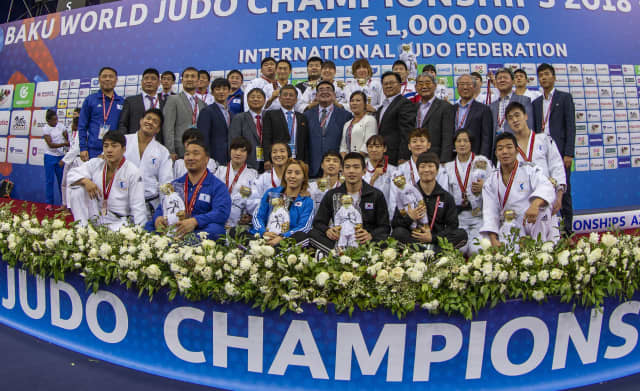 5. No end in sight to Japan’s male heavyweight drought

Japan last held the men’s heavyweight world crown in 2013. Their 15-year wait for a champion is their one weakness at the elite level. Muneta Yasuyuki was the last man to hold the title and did so at home in Osaka in 2003. Japan has won all 13 other titles since then and have had a stranglehold of many categories such as -73kg.

The heavyweight category has a special status in Japan with many of their most celebrated champions coming from this category such as IJF Hall of Famers Yamashita Yasuhiro and Saito Hitoshi.

The All Japan Openweight Championships is the pride and joy of the Japanese competition scene and its iconic one mat setup in the Nippon Budokan.

All the winners of this event in recent years have been awarded with the opportunity to compete at the highest level on the IJF World Judo Tour but all have fallen at the World Championships and Olympics.

Baku 2018 was supposed to be different. With Teddy Riner absent from the heavyweight competition in Azerbaijan the onus was on Japan’s two heavyweight picks to prove their worth and go out and rule the category.

Tokyo Grand Slam winner Ogawa Yusei was eliminated in round three while Olympic silver medallist Harasawa Hisayoshi was shocked by Ulziibayar Duurenbayar (MGL) in the quarter-finals. All Japan Openweight Championships gold medallist Harasawa came back to win bronze but did little to stake his claim for Tokyo 2020. 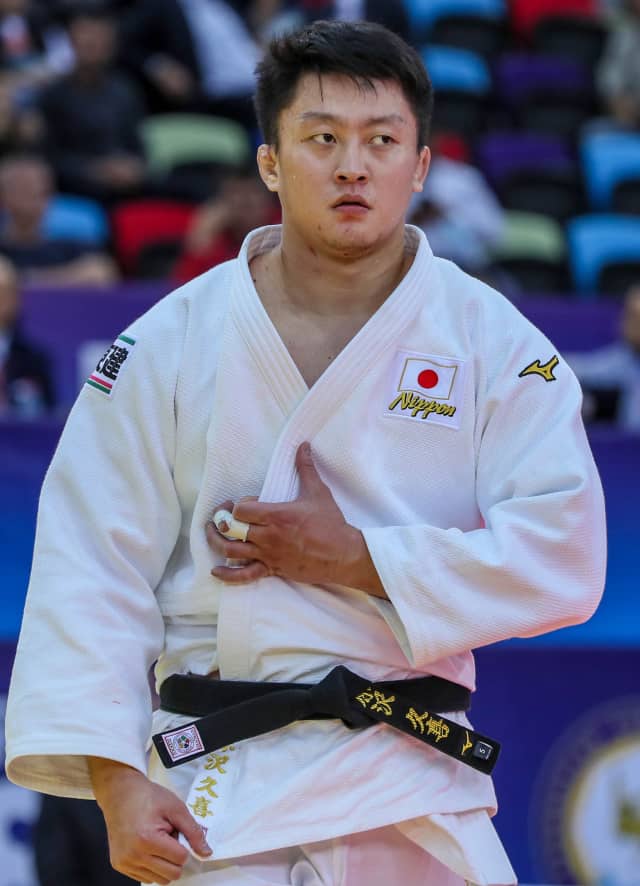 Japan has an alternative. It's a race against time but they have a young man with judo in his genes and who is blessed with the size, frame and agility that has seen him earmarked by high-ranking officials in Japan as their great heavyweight hope.

Kokushikan University member Saito Tatsuru, 16, the son of the late Saito Hitoshi, double Olympic gold medallist and world champion, has been picked for the Junior World Championships later this month in the Bahamas.

Tatsuru stands at 6ft 2in and weighs 155kg and has years of growth ahead of him. The golden rookie will be making his IJF debut after an introduction to the international stage in April when he won a Junior European Cup in St. Petersburg, Russia, with four ippons from four contests.

The teenager will fight at the Kodokan Cup, a qualification event for the Osaka Grand Slam 2018, in early November and a strong performance there would secure a berth for the fifth and final Grand Slam of the season.

Watch the Junior World Championships live and free here on the IJF website from 17 - 21 October.