A day at the All Japan High School Championships

Written by Mark Pickering on 21. Mar 2019
Share
A sunny spring morning in Tokyo, in which the cherry blossom season was officially declared on Thursday, is the perfect accompaniment to see the historical landmark that is a sun-kissed Imperial Palace and its many grounds.

However, after being treated this sight after a light walk from a typically crowed commuter-heavy Kudanshita Station, it’s time to stroll into Kitanomaru Park in Chiyoda. 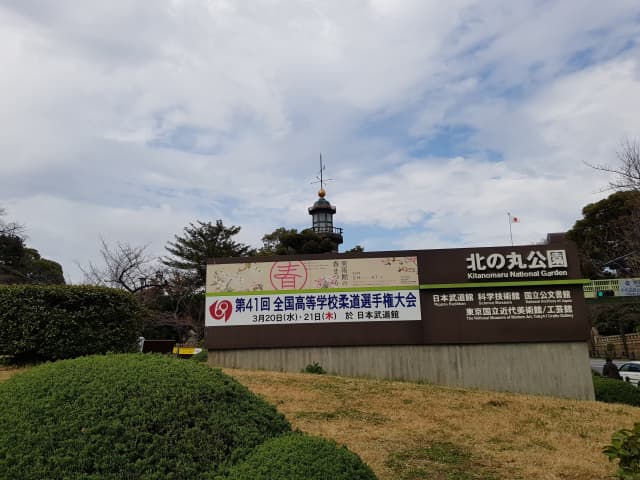 Pockets of young groups have assembled outside the venue and a healthy queue for tickets snakes around the side of the main entrance while the smell of meat under the grill food fills the air and wets the appetite.

Just beyond the NHK production truck, from where the live afternoon broadcast will be controlled, the event banner proudly stands out in front of the main entrance. The fact the locals are themselves taking photos shows the meaning of this event.

Today, everyone is gathered for team event at the 41st All Japan High School Championships. 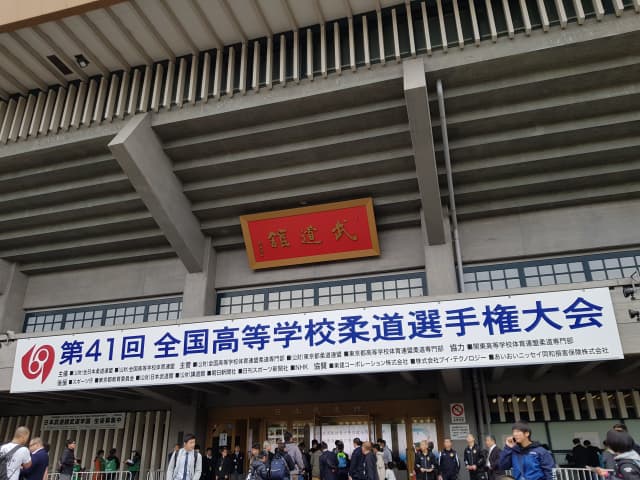 After purchasing a very reasonably priced ticket (1,000 Yen), there’s a plethora of young staff members waiting to assist you inside. The posters and merchandise are meaningful and are snapped up en masse.

With the competition already underway at 9am, the buzz from inside the venue hits you upon entry into the building as you bid to stave off the temptation of an early morning treat from the enticing vending machines.

Once the door opens, to show the field of play, the immediate and overwhelming reaction is simply awe.

It’s judo in its purest form in its mecca and heartland. 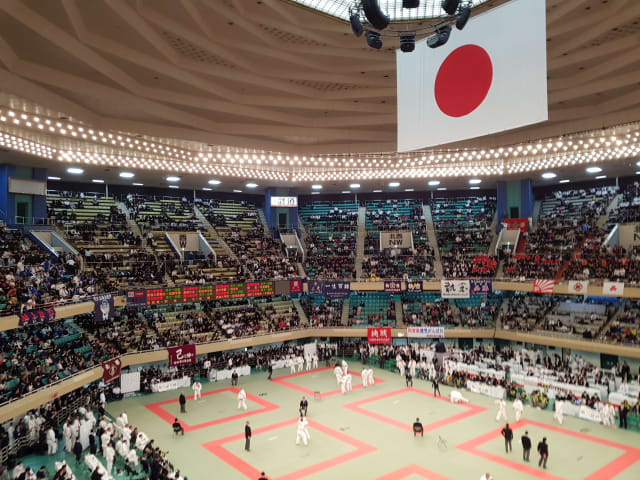 On the red and green tatami, stands before everyone the future of Japanese judo, all campaigning in white judogi, with black and white and black red belts to distinguish between the judoka. There are eight mat areas and all are full with budding talents who have a wealth of support from their schoolmates who sit in both tiers in large groups and are well prepared for a day of cheering for their peers with their own personalised chants. 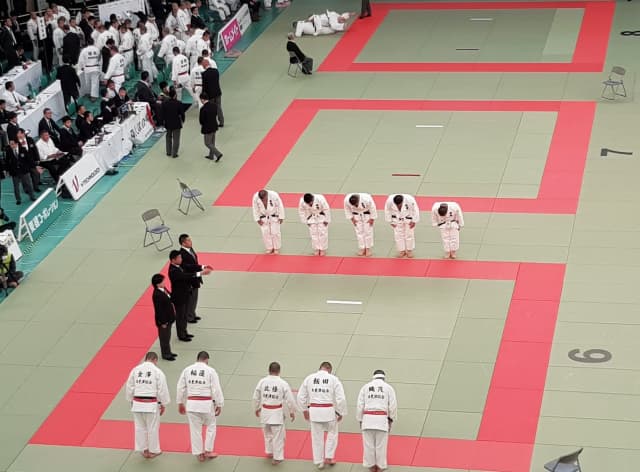 After taking a seat, you’re drawn to the Japanese flag which hangs from the rafters far above the action. 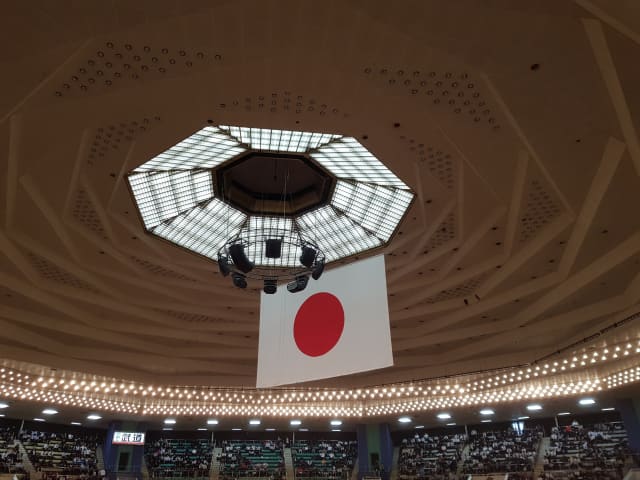 Champions of the present day and yesteryear are dotted around the stands with friends and their own students as everyone remembers their own intrepid journey which was impacted greatly by this very event.

Officials, staff, coaches, and members of the media are matside on both sides on the venue which has the traditional offering of flags for different high schools and a 2D L.E.D board showing the current matches and competitors. 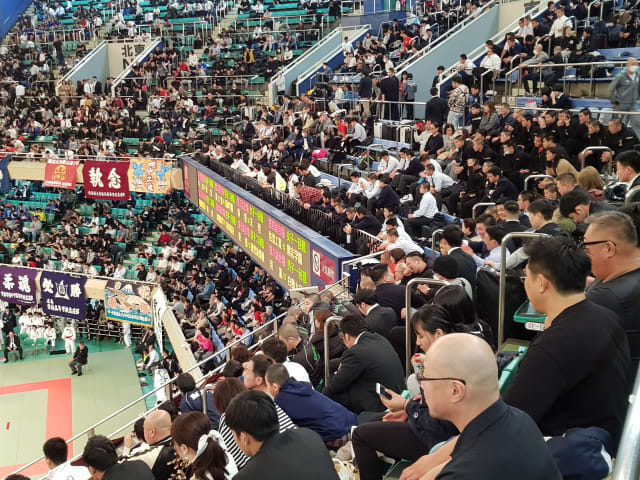 The setup may look different from a senior international on the elite stage but so it should. This is Japan, this is an event for teenage judoka and it’s unmatched in its level and history for a high school competition.

The corner judges remain and the scoring system and timing is different but what you see before you is judo.

Judo like you cannot see anywhere else in the world.

The appearance of the venue is unique and rightly so for a venue which was built to stage the 1964 Olympic judo event.

These are minor details in the grand scheme of things as the eye is drawn to the judoka that each look to control the centre of their respective tatami.

Judo’s moral code, an exclusive set of values, are on display on the mat and it the stands as juniors bow to their seniors and rush around to bring lunch boxes to their colleagues with some teetering under the weight of endless bento boxes as they make their way through the crowds with a marginal eyeline behind the Japanese lunchboxes.

This is day two of the event and therefore it's the team competition which is extra special in judo’s homeland.

There and separate competitions for boys and girls and the desire of these young judoka to prevail and to make their coaches and peers proud is striking.

After a close defeat, one male competitor went down onto this knees to bow to his coach and effectively apologise for his performance.

On the adjacent mat, after an emphatic victory for a young female judoka, there’s no place for a celebration as there’s still more contests to come and respect is the foremost value of the gentle way.

The event programme features a one-page poster for the 2019 World Championships which will be housed in this very venue in August. World Champion ABE Uta (JPN) who fought in the individual competition on Wednesday is one of the featured champions and that’s inspiring for young judoka and adds to the draw and value of these high school championships. 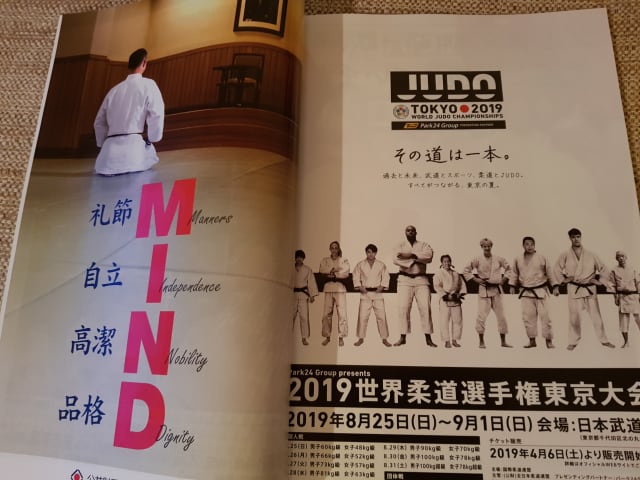 The Nippon Budokan offers inspiration for all visitors and its not limited to the high-octane action on the mat.

Around the venue you will see pictures from the iconic budo events which have emanated from the world-renowned indoor arena which translates into English as the Martial Arts Hall.

Many spectators even get a brush with the stars as Japanese judo’s leading acts can often be found on the main concourse.

Japan head coach INOUE Kosei was met with a superstar reaction when he briefly appeared by the merchandise stands as fans flocked around him and were graciously allowed to take a photo with the Sydney 2000 Olympic champion and three-time world champion.

Colombian legend Yuri ALVEAR was in attendance with her Japanese coach HAYAKAWA Noriyuki. Double Olympic medallist and three-time world champion ALVEAR, who is preparing to compete at the Tbilisi Grand Prix next week, is a regular at such events when in Japan and has even be known to join in with a few chants.

Outside the venue with the sun at its highest point, those who have already finished competing gather to take team pictures, to thank their supporters and for family and friends to show their pride with official photographers on hand to capture these special moments outside the Budokan.

As heavyweight Olympic silver medallist HARASAWA Hisayoshi and his unmistakable frame can be spotted easing his way through the crowd and into the shade, the line for tickets remains strong and many tourists are intrigued by the crowds and the teenagers in their pristine white martial arts uniforms in the afternoon sun.

Back inside, and with some sustenance sought from some newly-acquired judo biscuits, it’s time to see Kokushikan claim the boys title and Fuji Gakuen fron Yamanashi claim the girls title. 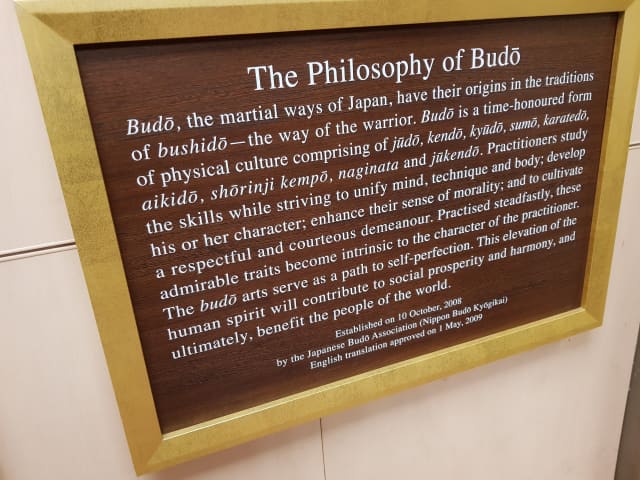 The Nippon Budokan will do it all again, for a one-day spectacle that transcends Japanese judo, when the best heavyweights and most gallant and technically brilliant lightweights, gather at the All Japan Openweight Championships on Monday 29 April.