All Smiles For Kazakh Hero Smetov

By Mark Pickering on 05. Apr 2019
Share
Use #JudoAntalya2019 to join in with the social media discussion

-48kg: Sixth triumph for KRASNIQI on the Grand Prix stage

Paris Grand Slam silver medallist Distria KRASNIQI (KOS) defeated Olympic bronze medallist Otgontsetseg GALBADRAKH (KAZ) by ippon to claim her sixth Grand Prix title. KRASNIQI, whose coach Driton TONI KUKA is at home with another set of athletes for a training camp, won it alone with a convincing performance that culminated with a harai-goshi for ippon with six seconds left on the clock. 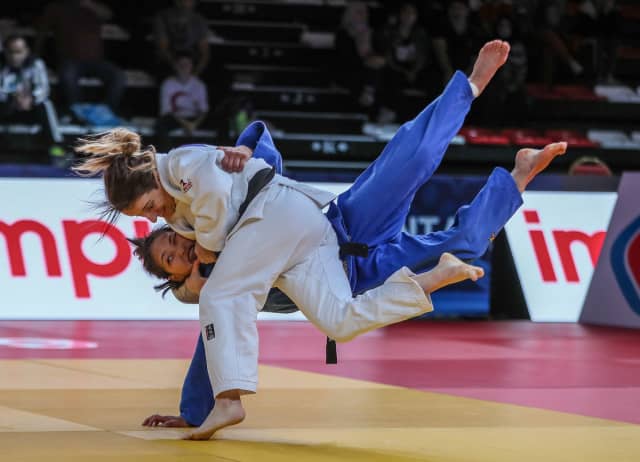 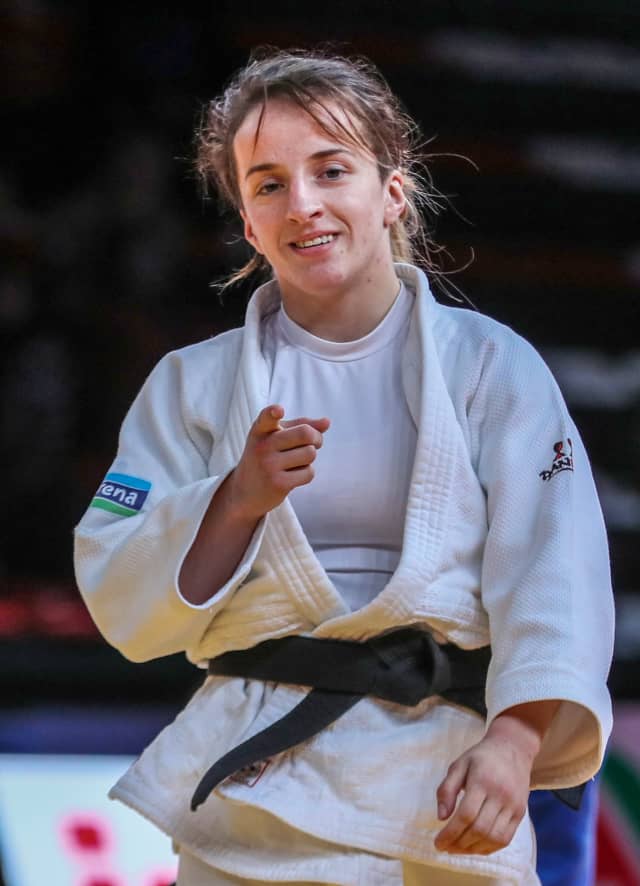 The first bronze medal contest was won by NIKOLIC who shaded World Judo Masters bronze medallist Marusa STANGAR (SLO) by the margin of a single waza-ari which was the only score in the four minute contest which opened the final block.

The second bronze medal was won by KANG who defeated world number 61 Mireia LAPUERTA COMAS (ESP) in 36 seconds by ippon from a low tai-otoshi. 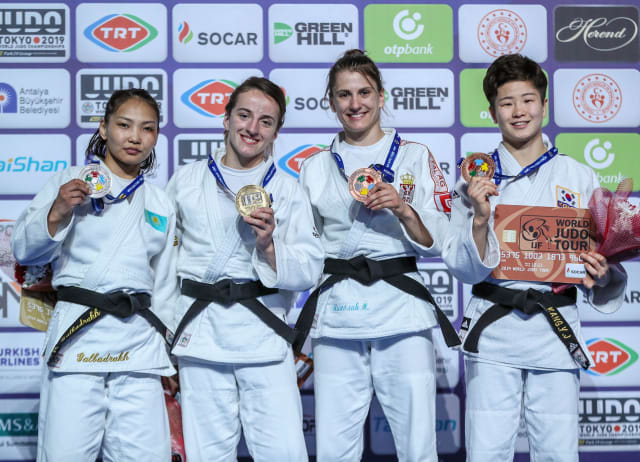 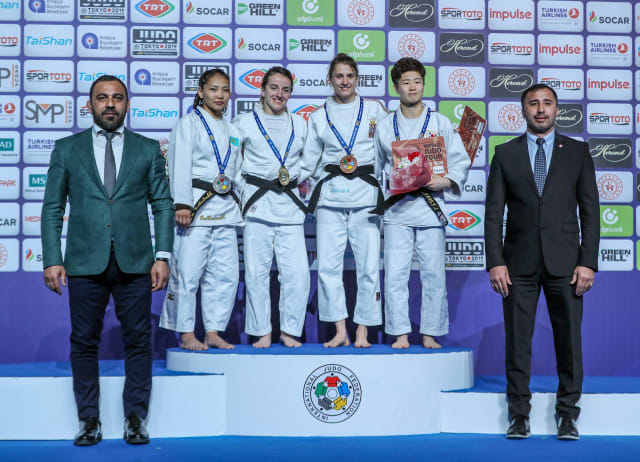 Two-time world silver medallist Andreea CHITU (ROU) rediscovered her form with a devastating performance in the -52kg category in Turkey. CHITU picked up her fifth Grand Prix win and first IJF title since the Jeju Grand Prix in 2015 by beating former world champion MUNKHBAT Urantsetseg (MGL) by two scores. The Mongolian, who took bronze a week ago in the -48kg category, was dismissed with a ko-soto-gake for ippon. 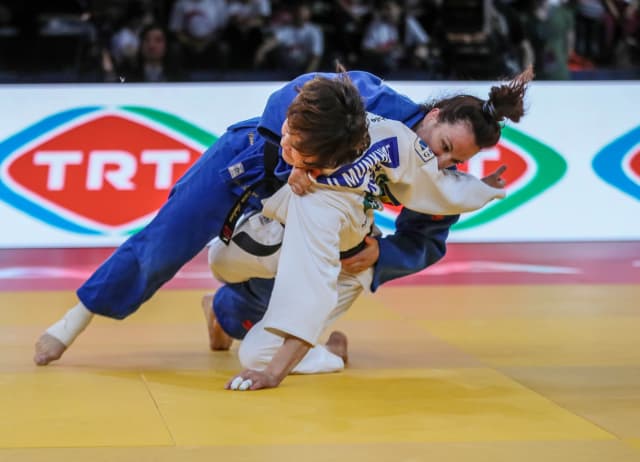 The first bronze medal was awarded to world number 86 Gultaj MAMMADALIYEVA (AZE) who upset MENEZES. MAMMADALIYEVA, 19, won her first IJF medal contest with a sumi-gaeshi in golden score in a huge result for the young Azeri.

The second bronze medal was won by world number 40 PIMENTA, who matched her result from Tbilisi a week ago, by throwing two-time Grand Slam silver medallist Yulia KAZARINA (RUS) with sutemi-waza before trapping the Russian in a kata-gatame hold for 10 seconds. 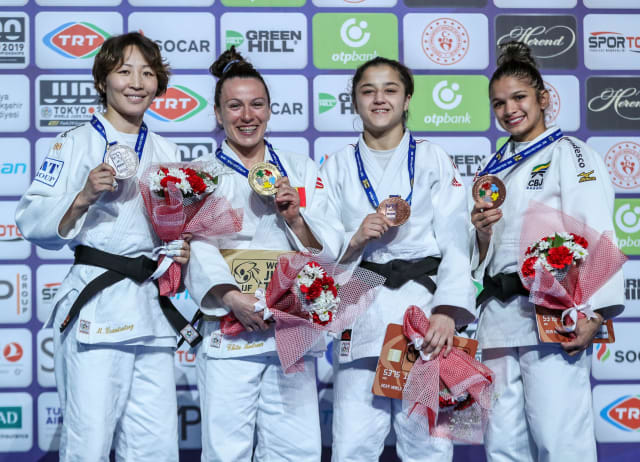 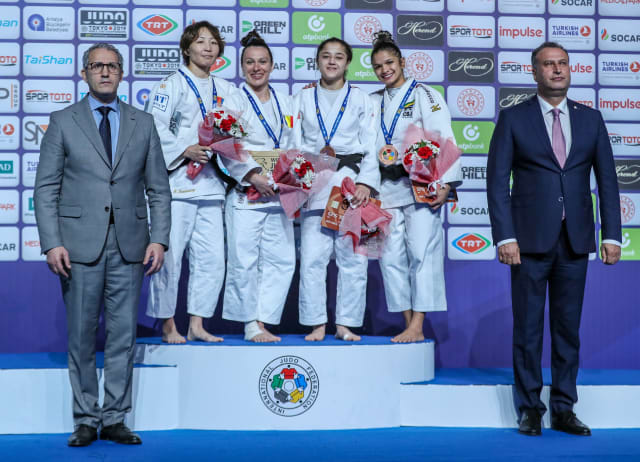 European u23 Championships winner Julia KOWALCZYK (POL) topped an IJF podium for the first time in her career and did it the hard way after a 10-minte duel with world number 20 Kaja KAJZER (SLO). Junior World Championships bronze medallist KAJZER was disqualified after six minutes of golden score for passivity as the 2017 Baku Grand Slam bronze medallist from Poland celebrated the her biggest win on the IJF circuit. 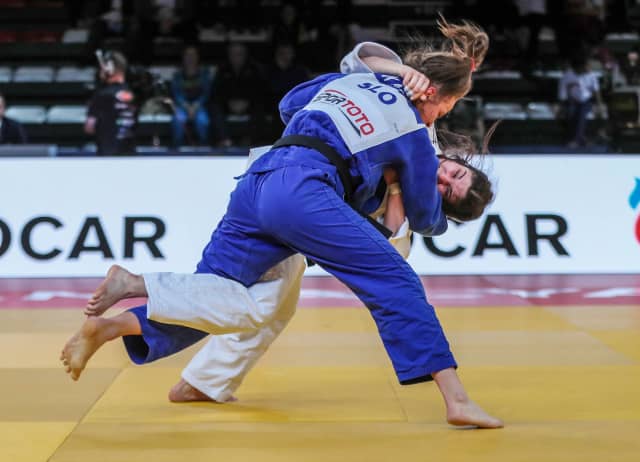 In the first semi-final KOWALCZYK outlasted world number 69 Mariia SKORA (UKR) in golden score while in the second semi-final world number 43 ZHANG Wen (CHN) received her third penalty for passivity against KAJZER and was disqualified.

The first bronze medal was awarded to ZHANG who defeated world number 41 Jovana ROGIC (SRB) by two scores as an o-soto-gari and mune-gatame hold ended the hopes of Serbia momentarily.

The second bronze medal was won by SKORA when Marica PERISIC (SRB) was disqualified for endangering the arm of her opponent while attacking. SKORA led with a waza-ari from a hip throw before the waki-gatame as Serbia missed out in both medal contests in the -57kg category. 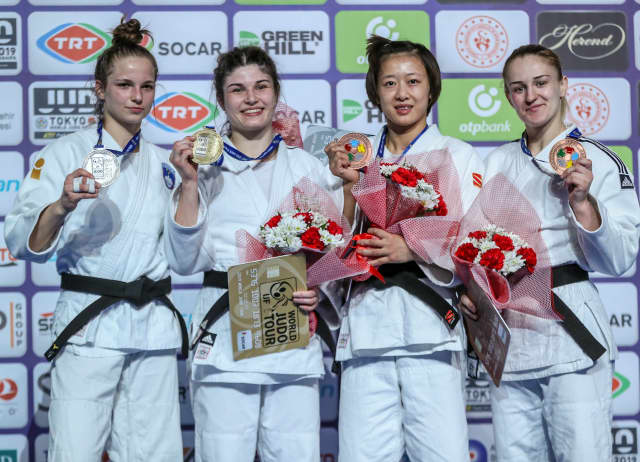 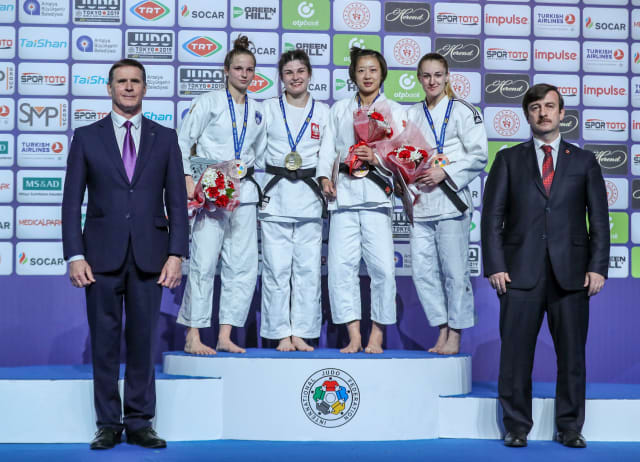 -60kg: Five-star SMETOV a class above for Kazakhstan

Olympic silver medallist and former world champion Yeldos SMETOV (KAZ) lived up to his top seed billing as he claimed his fifth Grand Prix gold medal. The world number six opened the scoring with a waza-ari from a ko-uchi-gari before pinning down his rival with a sankaku-gatame for his second and match-winning waza-ari score. Kazakh hero SMETOV secured his first Grand Prix gold since Hohhot 2018, the first Tokyo 202 Olympic qualification event. 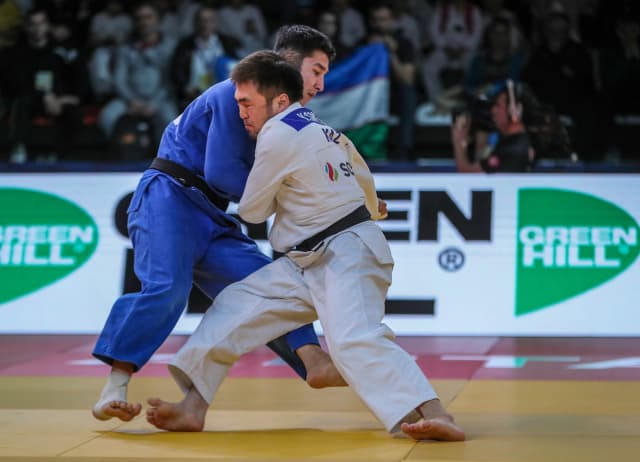 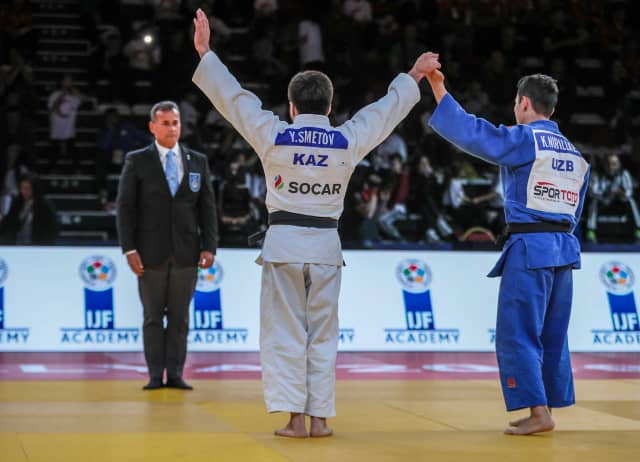 The first bronze medal was won by 18-year-old AKKUS who launched London 2012 Olympic bronze medallist Felipe KITADAI (BRA) in 14 seconds by ippon from a modified kata-guruma. 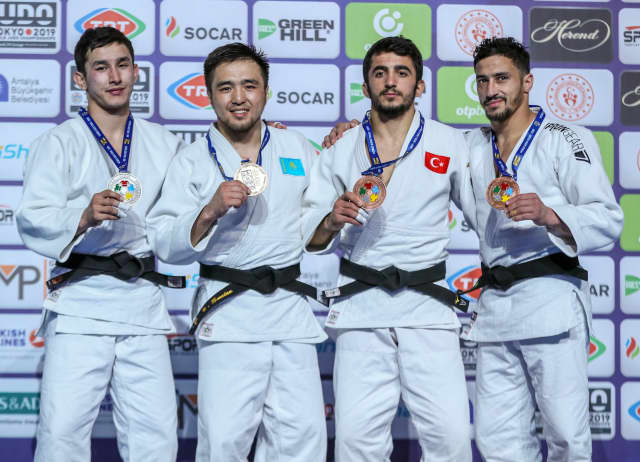 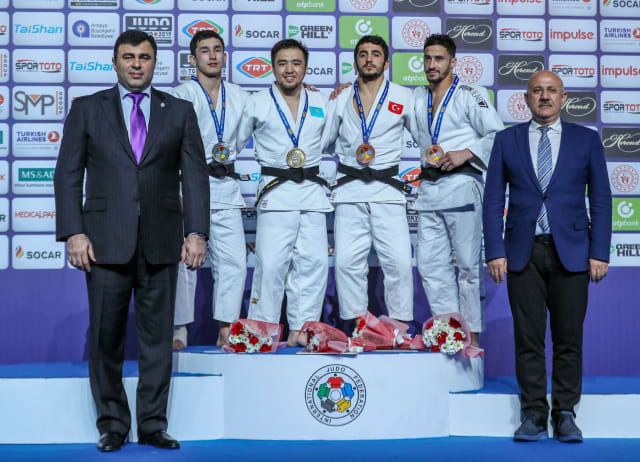 Paris Grand Slam winner Denis VIERU (MDA) made history for Moldova as he beat three-time world silver medallist Mikhail PULIAEV (RUS) to win the -66kg final. PULIAEV received his third shido and marching orders after three minutes of golden score after he grabbed the leg of his opponent to give VIERU and his country their first gold medal on the Grand Prix stage. 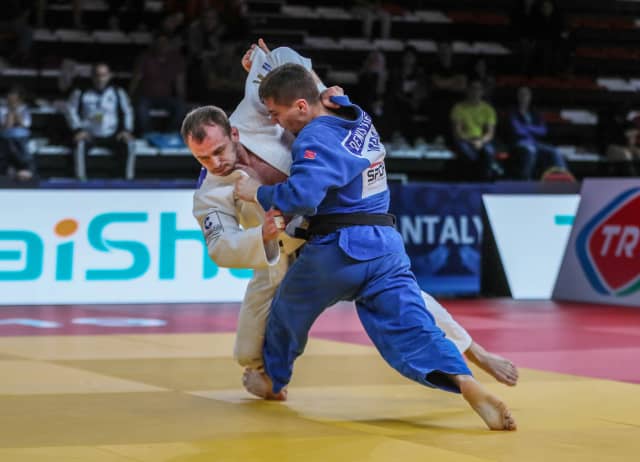 In the first semi-final Tbilisi Grand Prix bronze medallist Bagrati NINIASHVILI (GEO) was disqualified after picking up three penalties against PULIAEV with the final infringement being for a false attack. In the second semi-final VIERU defeated world number 13 GANBOLD Kherlen (MGL) with 36 seconds left on the clock by ippon.

The first bronze medal was won by Tel Aviv Grand Prix bronze medallist Alberto GAITERO MARTIN (ESP) as GANBOLD stepped out of the area for his third shido and held his ribs as he looked off the pace in the final block.

The second bronze medal went to NINIASHVILI after one-time Grand Slam winner Abdula ABDULZHALILOV (RUS) was penalised with his third shido for passivity in golden score to send the 20-year-old Georgian onto the podium. 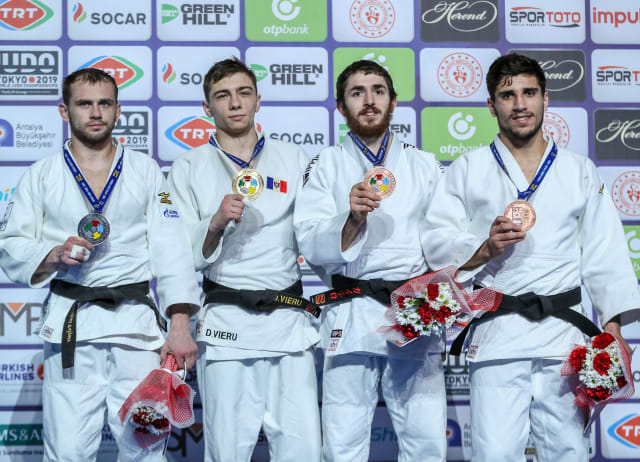 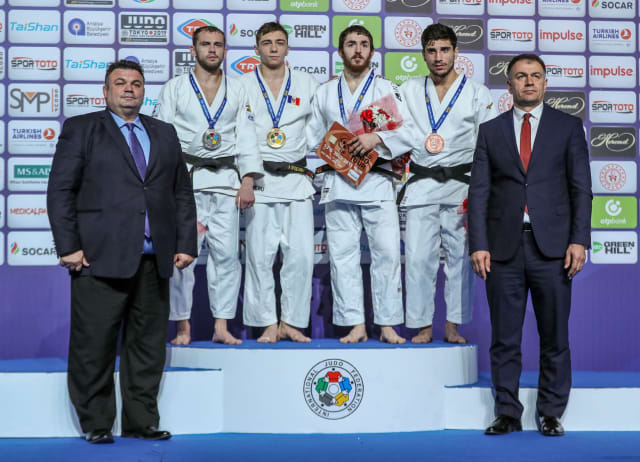