A Signing of Contracts is a Public Reaffirmation

Written by Jo Crowley on 07. Oct 2022
Photographs by Gabriela Sabau
Share
Behind the scenes, in judo, there are often discussions, decisions and progressive moments which warrant applause but don’t get seen. It’s necessary to pass over these occasions most of the time in an effort to be efficient and work in a timely manner. They just happen and the cogs move, judo moves forward seamlessly. However, in Tashkent there was a special signing prior to the day two final block.

The presence of IJF President Mr Marius Vizer and the AJJF President Mr Yasuhiro Yamashita illustrates that there is a significant moment to mark. Uzbekistan brought the two presidents together in order to further unify the two organisations.

Mr Vizer began, “We have the pleasure and the honour to sign again for the Tokyo Grand Slam. After the recent period of difficult situations in many areas of the world, in many regions, related to the pandemic, we show unity and inspiration to the graat leaders of the world. More and more we find solutions to the world’s challenges. I want to thank Mr Yamashita, a great champion, for this continuing partnership, one that must be nurtured for as long as possible for the benefit of the judo world.” 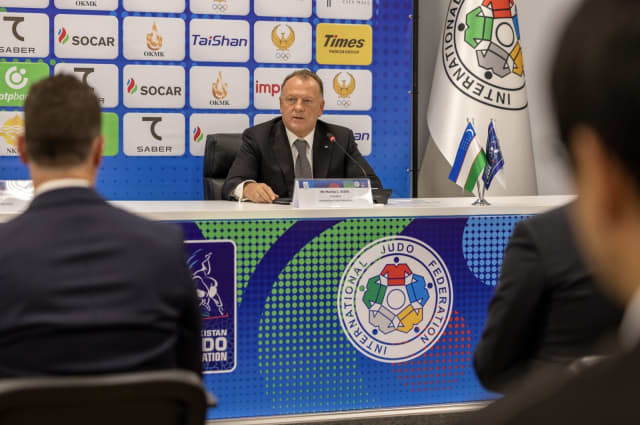 Mr Yamashita’s words kept the same rhythm of positivity, “Dear judo family, it is with great pleasure that we are here with you at the World Championships to announce to you the return of the IJF World Judo Tour to Japan. Grand Slam Tokyo will be held in December 2022 and 2023 in the Tokyo Metropolitan Gymnasium. I wish to thank all of our partners for their partnership and friendship in the direction of this event. It is a qualifying event for the 2024 Olympic Games in Paris and that occasion will be staged for the best judoka in the world and for the celebration of our judo.”

The two contracts were signed by the two presidents and they thanked each other warmly. A question from the floor then served to cement the shared feeling of unity, ‘How important is it that the IJF maintains a good relationship with the AJJF?’ Maybe this seems like a simple question that we should all understand the answer to, inherently, but it’s good to reaffirm what we think we know and to hear it from the those leaders who are responsible for the direction of our sport. 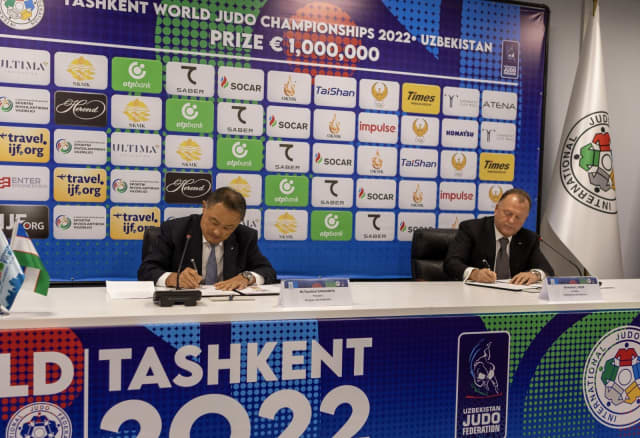 Mr Vizer took the opportunity to be clear unequivocal, “It is a long and fruitful relationship, one that has lasted and will last for many years more. Since I have been President we have fostered and developed a good synergy with the AJJF. There has always been a good joined path walked with Mr Yamashita on behalf of the AJJF and Mr Uemura on behalf of the Kodokan. It is important for us, as Japan is the country of judo and with Jigoro Kano as the founder. We have a high respect for the Japanese people and their traditions, not just within the sport but in all areas of life. Japan provides us with both our soul and our engine.” 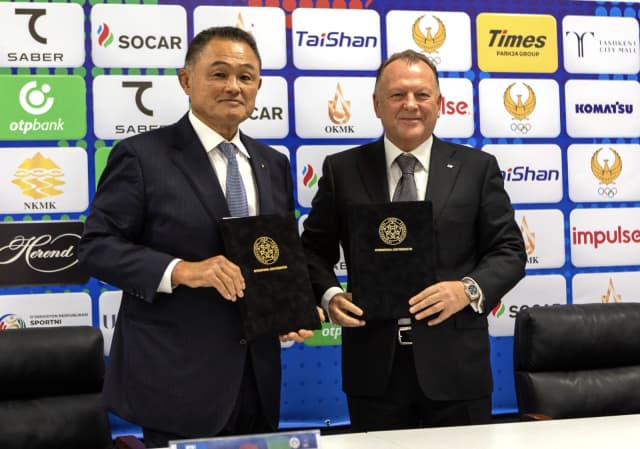 The contracts are signed. The judo world will be invited back to Tokyo not just this December but next year and the year after that too. The world is glad to watch the best of world judo in the country that have it to us.