By Mark Pickering on 28. Oct 2016
Share
FRENCH FLAIR SEES THEM OUT IN FRONT ON #WORLDJUDODAY IN ABU DHABI
The Abu Dhabi Grand Slam 2016, the penultimate Grand Slam of the year, opened on #WorldJudoDay as Rio 2016 Olympic medallists returned to the IJF World Judo Tour for the first time in the United Arab Emirates.
As the global judo family celebrated #WorldJudoDay the world’s elite judoka were in action in the Emirates at the fourth of five Grand Slams in 2016. Following Grand Slams in Paris, Baku and Tyumen, the youngest Grand Slam on the tour became the centre of the sporting world. 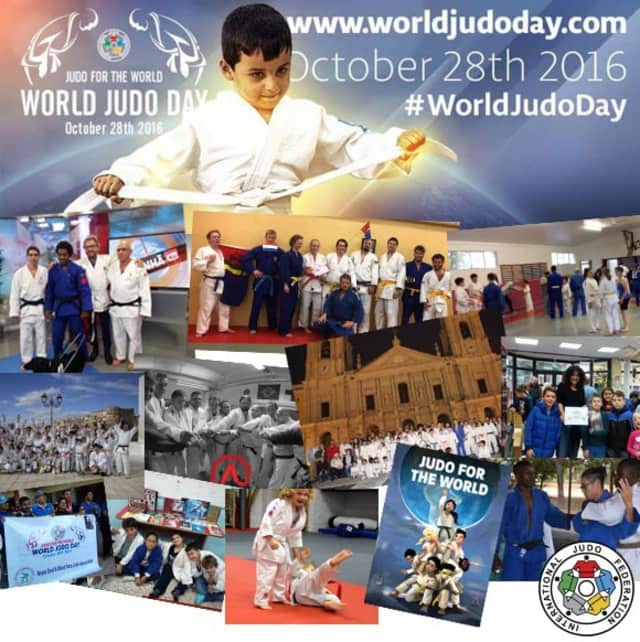 The Rio 2016 Olympics was followed by Grand Prix events in Zagreb and Tashkent which built nicely to the Abu Dhabi Grand Slam, one of the flagship events on the IJF World Judo Tour.

As day one of the Grand Slam was also #WorldJudoDay the delegations, fans, judoka, referees, coaches and IJF staff joined together with Mr. Marius VIZER, IJF President, for a special #WorldJudoDay group photo before the final block.

Mr. Marius VIZER, IJF President, said: “I congratulate all judoka around the world on #WorldJudoDay and I thank them for their contribution to judo. I wish them the best in life, health, happiness and good achievements in judo.”

Mr. Neil ADAMS, IJF Hall of Famer, said: “#WorldJudoDay is an ideal time for the judo family to come together, as it does so well, to think about the purpose of judo and what we all want from the sport.” 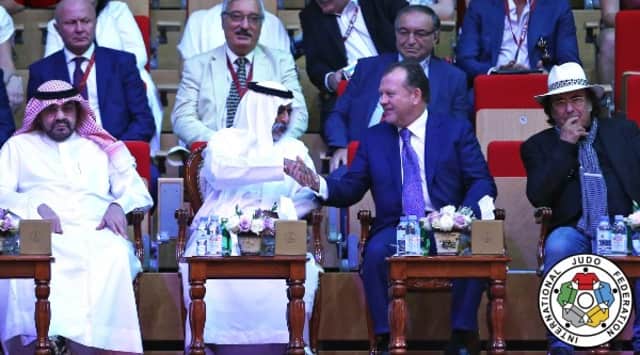 Day two of the Abu Dhabi Grand Slam will see four weight categories in action at the IPIC Arena as the men’s -73kg and -81kg categories will be joined by the women’s -63kg and -70kg categories with U.A.E hero Sergiu TOMA set for -81kg action on Saturday and Azerbaijan’s Olympic silver medallist Rustam ORUJOV poised for -73kg competition.

Rio 2016 Olympic bronze medallist Otgontsetseg GALBADRAKH (KAZ) won her second Grand Slam gold medal with a fine display in the women’s lightest weight category. The 24-year-old judoka defeated Zagreb Grand Prix winner Milica NIKOLIC (SRB), who was a surprise finalist, to win -48kg gold and continue her rich vein of form. GALBADRAKH and NIKOLIC were locked in a stalemate at the halfway point until both came together and the Kazakh took control of her opponent to lift her up with her favoured ura-nage for ippon. 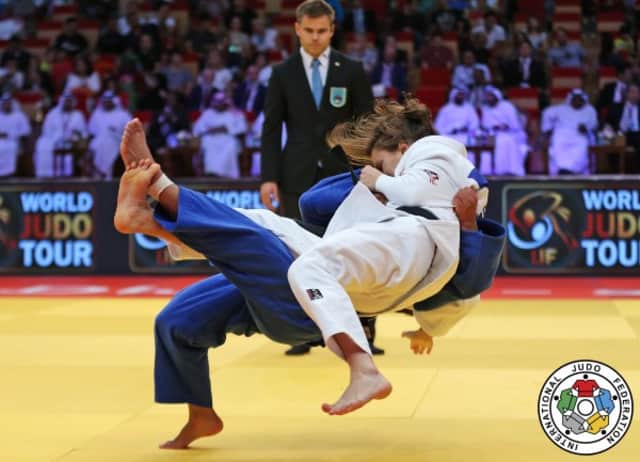 In the first semi-final former world champion MUNKHBAT Urantsetseg (MGL) was shocked by NIKOLIC. The Serbian fighter guaranteed her place on the podium by narrowly beating the Mongolian with a yuko score to continue a successful post-Olympic run on the IJF World Judo Tour.

In the second semi-final pocket-sized powerhouse GALBADRAKH (KAZ) bested World Judo Masters bronze medallist Julia FIGUEROA (ESP) in golden score. After 44 seconds the Kazakh fighter, who was the first Rio 2016 medallist to return to IJF duty, outmanoeuvred her Spanish foe and threw with a determined technique for a yuko and a place in the final.

The first bronze medal contest was won by Almaty Grand Prix bronze medallist Nathalia BRIGIDA (BRA) who returned to winning ways against FIGUEROA. BRIGIDA was off the pace in her previous contests but regained her composure in the break to come back and win the first contest of the final block by a yuko score. The second bronze medal was won by MUNKHBAT who was too experienced for 19-year-old Sephora CORCHER (FRA). Mongolia’s -48kg star opened the scoring with a yuko before confidently dispatching her French opponent and Glasgow European Open silver medallist with a trademark uchi-mata. 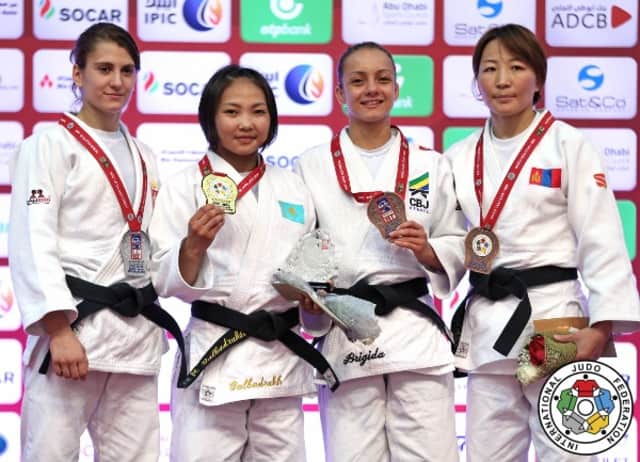 -52kg: France's Astride GNETO follows in the footsteps of her older sister

Junior European Championships bronze medallist Astride GNETO (FRA) is taking the -52kg mantle from her older sister and London 2012 Olympic bronze medallist Priscilla GNETO (FRA) after striking Abu Dhabi Grand Slam gold on Friday. There is an uncanny resemblance between Astride, 20, and Priscilla, 25, in terms of thier appearance, weight and style as the younger sibling achieved her first major honour as a senior fighter. GNETO junior came into the contest with a 2-0 head-to-head record over top seed and Rio 2016 Olympian Angelica DELGADO (USA) and made a hat-trick today by throwing with a forceful osoto-makikomi for ippon. Astride will now hope to make herself the French number one at -52kg as Priscilla has deliberately vacated her -52kg position (with her sister in mind) to move up to -57kg where she will debut on Saturday at the Malaga European Cup. 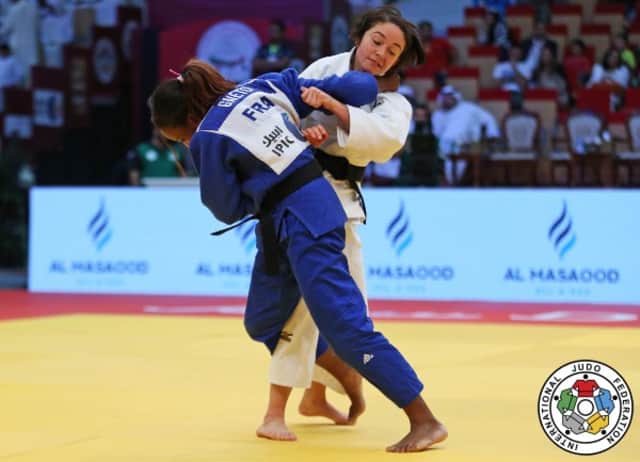 In the first semi-final DELGADO (USA) shaded London 2012 Olympian Kelly EDWARDS (GBR) - who won the Glasgow European Open a fortnight ago - by a single shido. In the second semi-final Zagreb Grand Prix winner Karolina PIENKOWSKA (POL) lost out to GNETO by a shido in a scoreless contest as both semi-finals failed to produce a score.

The first bronze medal was clinched by El Salvador Pan American Open winner Jessica PEREIRA (BRA) who took her career into unchartered territory with a win against PIENKOWSKA. The 22-year-old Brazilian tapped out her Polish opponent with a juji-gatame as Brazil continued to shine on day one. The second bronze medal was won by EDWARDS who defeated Junior European Championships bronze medallist Tihea TOPOLOVEC (CRO). The Grand Slam debutant from Croatia took EDWARDS the distance and into golden score for three minutes until she was penalised with a shido for passivity. Olympian EDWARDS improved on her Zagreb Grand Prix bronze with a new personal best and is making strides with every outing. 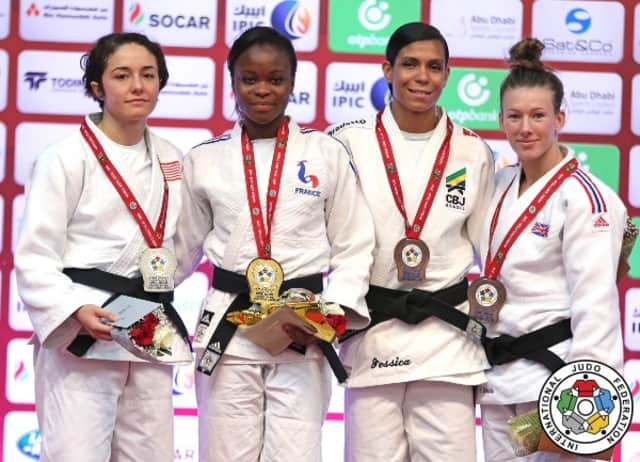 World Judo Masters silver medallist Helene RECEVEAUX (FRA) defeated Madrid European Open bronze medallist Theresa STOLL (GER) to win -57kg gold and made a flying start to the new Olympic cycle and her quest for a place at the Tokyo 2020 Olympics. RECEVEAUX, who was left at home by France in favour of Automne PAVIA for the Olympics, moved on from that disappointment in the best possible way by seeing off Grand Slam newcomer STOLL, 20, after 51 seconds with shime-waza for gold in the U.A.E on #WorldJudoDay. 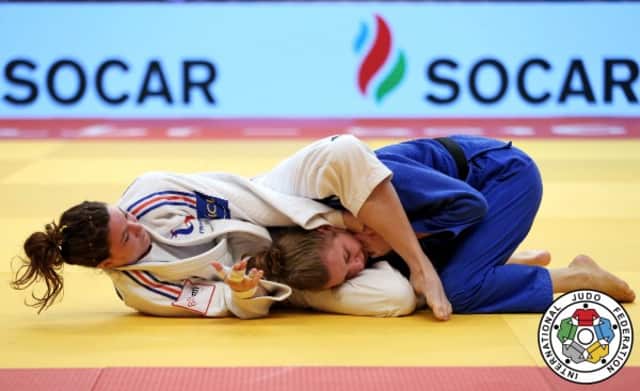 In the first semi-final RECEVEAUX (FRA) dominated the grips and contest against teammate Lola BENARROCHE (FRA) despite winning purely by two shidos. In the second semi-final STOLL threw colleague Johanna MUELLER (GER) for a waza-ari with a fast ashi-waza attack before following up in osaekomi for 15 seconds a place in the gold medal contest.

The first bronze medal was won by MUELLER – her first at this level – as she defeated Luxembourg’s first Grand Prix medallist Manon DURBACH in 34 seconds. Germany’s MUELLER, who travelled to Rio 2016 as a spectator with teammate Barbara BANDEL, submitted DURBACH in quick fashion and was all smiles as she returned to her feet to be officially awarded the contest. 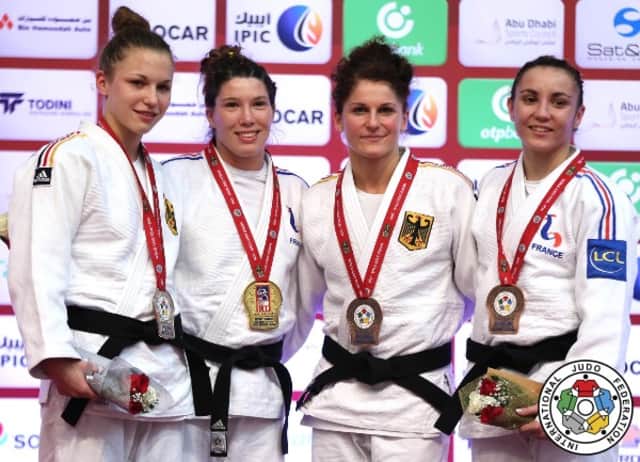 Former Junior world champion Francisco GARRIGOS (ESP) put in an inspired performance on #WorldJudoDay as the 21-year-old won all three of his contests to win his first Grand Slam gold medal. GARRIGOS, who won the Junior World Championships in 2014, lost in round three here a year ago and showed the degree to which he has improved in the last 12 months by beating Havana Grand Prix winner Eric TAKABATAKE (BRA) in the final. TAKABATAKE was penalised twice before GARRIGOS was reprimanded for holding onto the same side for too long without attacking and from there the Spaniard used up the remaining time on the ground as he probed the defensive abilities of the Brazilian in ne-waza to conclude the contest. The victory gives GARRIGOS an ideal start to the new Olympic cycle while TAKABATAKE has a silver medal to show for his trip and will look to repeat his Grand Slam honours as early as December at the final Grand Slam of 2016 in Tokyo. 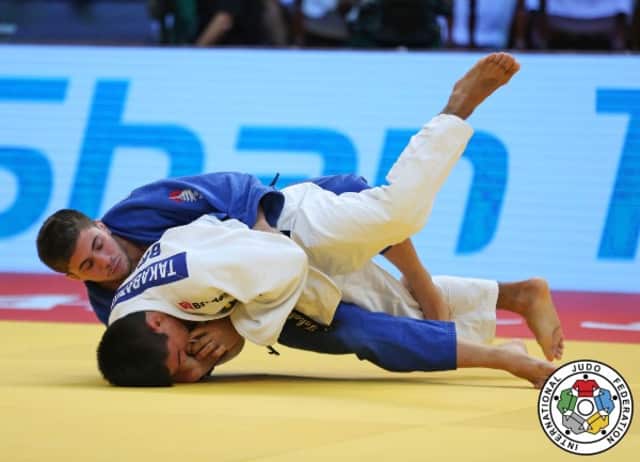 In the first semi-final TAKABATAKE downed Zagreb Grand Prix silver medallist Robert MSHVIDOBADZE (RUS) by ippon with 14 seconds remaining and no prior scores registered. The explosive Brazilian fighter had two shidos against his name but conjured up one of the best ippons of the day when he needed it the most as he guaranteed the Olympics hosts one more medal on day one.

In the second semi-final Tyumen Grand Slam silver medallist Albert OGUZOV (RUS) was outfought by GARRIGOS who prevailed after 91 seconds of golden score. OGUZOV applied more pressure during regulation time but GARRIGOS had enough in reserve to force the action in additional time. The Russian ducked under a gripping attempt from the Spaniard and was penalised with a shido to hand the contest to the young judoka.

The first bronze medal was won by OGUZOV who rushed past 22-year-old Mehman SADIGOV (AZE). Former Junior World Championships bronze medallist SADIGOV, who was stepping up to the Grand Slam stage for the first time, turned off an ouchi-gari attempt from the Russian but was not expecting his opponent to immediately pursue him on the ground as he unlocked an arm and forced the submission with a juji-gatame. The second bronze medal was won by Zagreb Grand Prix bronze medallist Cedric REVOL (FRA) who was sharp and stylish as he beat MSHVIDOBADZE. The Russian was looking to impress national team manager Ezio GAMBA who was in attendance but it was REVOL who threw beautifully with a drop seoi-nage for ippon having led by a yuko. 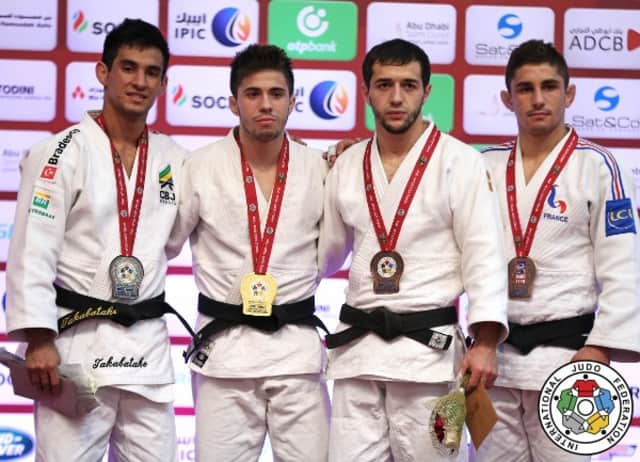 Tyumen Grand Slam bronze medallist Yakub SHAMILOV (RUS) won his first Grand Slam gold medal as he triumphed in a category which featured former Olympic and world medallists. The Russian’s adversary in the final was one such judoka as former world silver medallist Azamat MUKANOV (KAZ) opposed him. MUKANOV went behind to a waza-ari from a modified kata-guruma as his opponent closed in on the best result of his career. A sumi-gaeshi attempt from the Kazakh lacked power and the one score was enough for SHAMILOV who was crowned the -66kg winner. 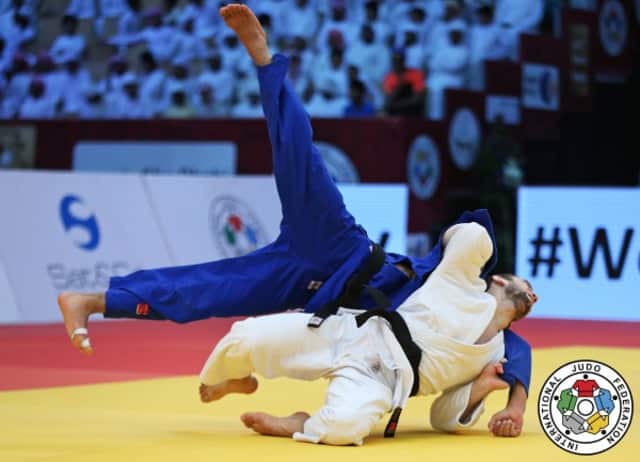 The first bronze medal was won by London 2012 Olympic champion Arsen GALSTYAN (RUS) who had one of his best days since he moved up to -66kg in 2015. World number 30 GALSTYAN, who lost out to teammate SHAMILOV, threw Portugal’s OLEINIC with a osoto-makikomi for a waza-ari and pressed forward in pursuit of a second score. A tomoe-nage after 73 seconds gave the Russian his second and match-winning waza-ari. The second bronze medal went to Pan American Championships winner Charles CHIBANA (BRA) who edged JEREB by a yuko score. CHIBANA took some deep breaths while there was a minor delay for the Slovenian to receive treatment for a nose bleed and a modified seoi-nage sent JEREB over for a yuko which was the only score of the contest. 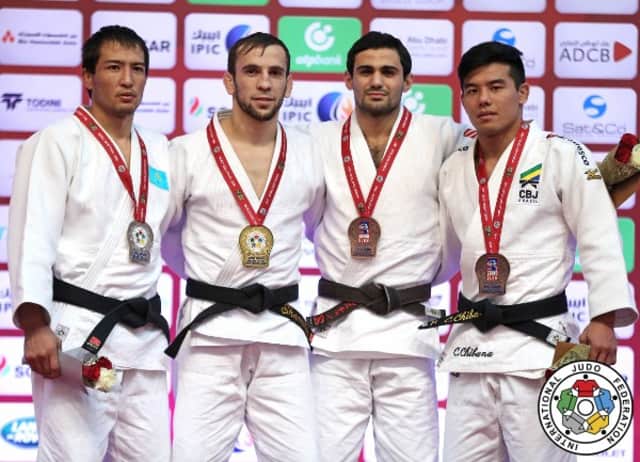