By Mark Pickering on 27. Oct 2016
Share
The United Arab Emirates is the setting for the fourth IJF Grand Slam of the 2016 season from Friday 28 to Sunday 30 October and marks the return of a number of Rio 2016 Olympic medallists who will compete for the first time since Brazil.

The IJF World Judo Tour has stopped in Croatia (Zagreb Grand Prix) and Uzbekistan (Tashkent Grand Prix) following the Rio 2016 Olympic Games and has now arrived in Abu Dhabi for the penultimate Grand Slam of the year. Grand Slams have been held in Paris (France), Baku (Azerbaijan) and Tyumen (Russia) already this year with the season set to finish in December with the fifth and final Grand Slam in Tokyo (Japan). 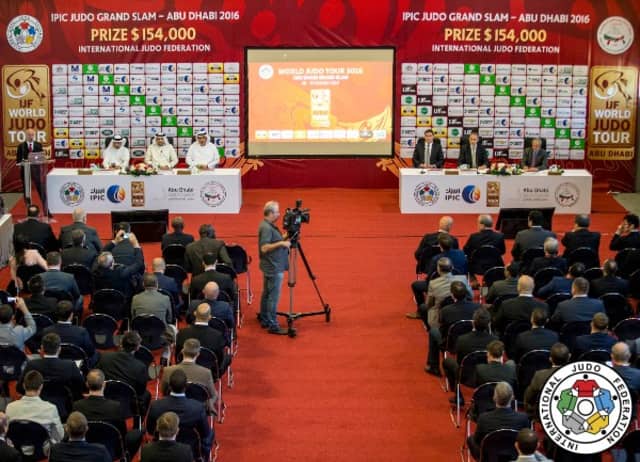 U.A.E won their first ever Olympic judo medal at the Rio 2016 Olympics as Sergiu TOMA (U.A.E) won -81kg bronze and became the second Olympic medallist in the history of the U.A.E. TOMA is a one of a number of Rio 2016 stars who are stepping back in action this weekend as -73kg Olympic silver medallist Rustam ORUJOV (AZE) and -48kg Olympic bronze medallist Otgontsetseg GALBADRAKH (KAZ) will also compete.

The draw took place on the eve of the sixth annual edition of #WorldJudoDay, in front of illustrious figures from the sport such as the IJF’s special guest, Ilias ILIADIS, who was among the onlookers as Mr. Vladimir BARTA, IJF Head Sports Director, revealed that 157 judoka (96 men, 61 women) from 34 nations will compete in the Emirates.

Mr. Mohamed MERIDJA (below - centre), IJF Education and Coaching Director, made the opening address on behalf of the International Judo Federation. 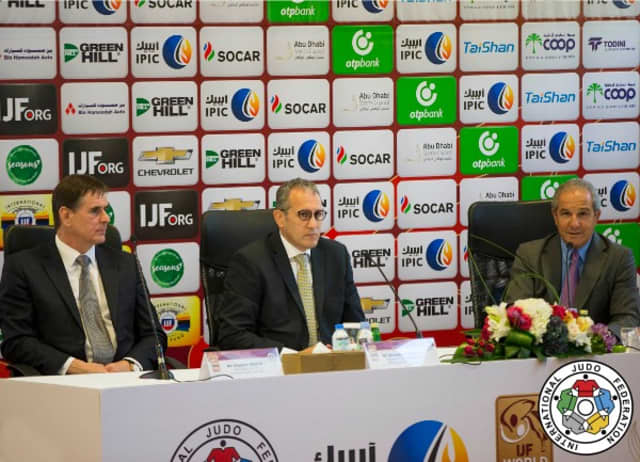 “Dear President, dear guests, dear judo friends, on behalf of the International Judo Federation and President Mr. Marius VIZER, I would like to express my warmest welcome to the fourth Grand Slam of the year. Following excellent Grand Slams in Paris, Baku and Tyumen, the stars of judo will now be in action in the Middle East. 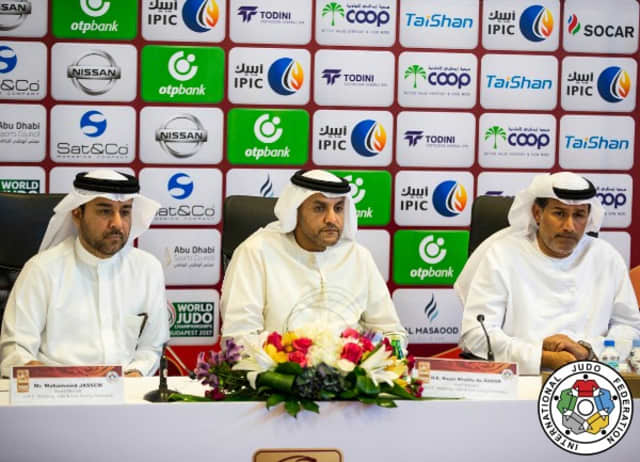 Rio 2016 Olympic bronze medallist Otgontsetseg GALBADRAKH (KAZ) will compete for the first time since the Games when she looks to claim her second Grand Slam title on day one in Abu Dhabi. The 24-year-old Kazakh judoka has former Mongolian teammate-turned-rival in ex-world champion MUNKHBAT Urantsetseg (MGL) for company in the category. MUNKHBAT lost her Rio 2016 Olympic bronze medal contest to KONDO Ami (JPN) by a yuko to finish fifth and at 26 years old is now starting a third bid for Olympic honours having finished seventh at London 2012. World Judo Masters bronze medallist Julia FIGUEROA (ESP) will also be among those to keep tabs on at -48kg.

Zagreb Grand Prix bronze medallist Angelica DELGADO (USA) is the number one seed at a Grand Slam for the first time as the 25-year-old has the momentum to medal at this level for the first time. The Rio 2016 Olympian will be joined in action by London 2012 Olympian Kelly EDWARDS (GBR) who won the Glasgow European Open a fortnight ago after capturing a career-best bronze at the Zagreb Grand Prix. Tashkent Grand Prix bronze medallist Tena SIKIC (CRO) has been one of the top performers since the summer and will be expecting to win her second Grand Slam medal of the season after bronze in Tyumen.

World Judo Masters silver medallist Helene RECEVEAUX (FRA) was overlooked for Rio 2016 in favour of London 2012 Olympic bronze medallist Automne PAVIA (FRA) who went on to finish seventh in Brazil. RECEVEAUX, 25, will now compete for the first time since the Masters and could launch her bid for Tokyo 2020 by winning her first Grand Slam gold medal. Manon DURBACH (LUX) won her country’s first Grand Prix medal last time out as she took silver in Uzbekistan and has now attracted national broadcasters from her country to Abu Dhabi.

European Championships silver medallist Kathrin UNTERWURZACHER (AUT) will be top seed at the Abu Dhabi Grand Slam as she fights for the first time since finishing seventh at Rio 2016. The 24-year-old Austrian finished fifth at the World Judo Masters either side of the European Championships and Olympic Games and will be the favourite for -63kg gold. World Judo Masters silver medallist Juul FRANSSEN (NED) will be confident of winning a second career Grand Slam medal after silver in Paris last year while Mariana SILVA (BRA) returns to the IJF World Judo Tour after an unexpected fifth-place at Rio 2016.

Baku Grand Slam silver medallist Maria PORTELA (BRA) won this event when it was a Grand Prix in 2012 and is capable of topping a Grand Slam podium this time around. The double Olympian from Porto Alegre fell in the second round at her home Olympics and will look to bounce back with a medal-winning display this weekend as it remains to be seen if the battling Brazilian will commit to four more years. Junior European champion Marie Eve GAHIE (FRA) is more than capable of opening her Grand Slam gold medal count this weekend as the 19-year-old is one of the most talented teenage judoka in the world. Former Cadet European Championship winner Katie-Jemima YEATS-BROWN (GBR) is starting to fulfil her potential on the senior stage having won the Glasgow European Open two weeks ago and will be excited to make her Gland Slam bow in Abu Dhabi.

European Championships silver medallist Guusje STEENHUIS (NED) started her road to Tokyo 2020 with a silver medal at the Zagreb Grand Prix. After being surprisingly left out of her country’s Rio 2016 team STEENHUIS returned to action in Croatia and was left disappointed with silver but extended her medal-winning win to six consecutive events. Samsun Grand Prix winner Madeleine MALONGA (FRA) and teammate Sama Hawa CAMARA (FRA) who won bronze at the Zagreb Grand Prix will both be contenders for France while Tyumen Grand Slam silver medallist Klara APOTEKAR (SLO) will be chasing successive Grand Slam medals.

Budapest Grand Prix winner Carolin WEISS (GER) took silver in Zagreb in September and should produce a similar result in Abu Dhabi. The former Baku Grand Slam bronze medallist is the top seed in the women’s heavyweight category which will be contested on the last day of the Abu Dhabi Grand Slam. Rio 2016 Olympian Maria Suelen ALTHEMAN (BRA) lost her opening contest at the Games as one of the worst performing members of the hosts’ 14-strong team. The Brazilian needs a much-improved performance on Sunday to restore the faith in her while Tashkent Grand Prix silver medallist Maryna SLUTSKAYA (BLR) will be looking for back-to-back IJF World Judo Tour honours.

Judoka around the world will celebrate #WorldJudoDay on Friday 28 October, the birth date of judo founder Jigoro Kano

Havana Grand Prix winner Eric TAKABATAKE (BRA) will be looking to lead from the front when he steps onto the tatami on #WorldJudoDay as the top seed in the -60kg category. The Brazilian will aim to finish ahead of recent standouts such as Tashkent Grand Prix silver medallist Matjaz TRBOVC (SLO) and Tyumen Grand Slam silver medallist Albert OGUZOV (RUS).

Zagreb Grand Prix winner Andraz JEREB (SLO) will have Olympic and world medallists to deal with in the -66kg category as one of the strongest fields in the competition. JEREB, 24, who took bronze at the Tashkent Grand Prix earlier this month, is the top seed ahead of former world silver medallist Azamat MUKANOV (KAZ), London 2012 Olympic champion Arsen GALSTYAN (RUS) and Pan American Championships winner Charles CHIBANA (BRA) – who lost to eventual Olympic bronze medallist EBINUMA Masashi (JPN) in Rio.

Rio 2016 Olympic silver medallist Rustam ORUJOV (AZE) graces the IJF World Judo Tour as an Olympic medallist for the first time in Abu Dhabi and will start as a heavy favourite. ORUJOV has Tyumen Grand Slam winner Musa MOGUSHKOV (RUS) alongside him at -73kg while Zagreb Grand Prix silver medallist Tommy MACIAS (SWE) will aim to win a first Grand Slam medal. Former world bronze medallist Victor SCVORTOV (U.A.E) is one of the hosts’ leading judoka and will be in medal contention.

U.A.E hero Sergiu TOMA (U.A.E) won his country’s second Olympic medal in their history when he won bronze at Rio 2016. TOMA will receive a rapturous ovation and will be fancied to win gold in front of his home fans. World bronze medallist Victor PENALBER (BRA) fell short at the Olympics and will need to be motivated and in good condition to medal in Abu Dhabi. Former Paris Grand Slam bronze medallist Frank DE WIT (NED) is still only 20 years old and will be a fighter to look out for in this new Olympic cycle.

Baku Grand Slam silver medallist Aleksandar KUKOLJ (SRB) is the top seed on the Grand Slam stage for the first time in his career and the world number 14 will expect to produce a similar result in the Emirates. KUKOLJ, 25, was fifth at the European Championships this year and is Serbia’s top men’s medal hope in Abu Dhabi. Almaty Grand Prix winner Axel CLERGET (FRA) mounted a late bid for Rio 2016 selection with a run of top displays on the IJF World Judo Tour but graciously backed teammate Alexander IDDIR (FRA) who was impactful for the full course of the last Olympic cycle and earned the pick for France. CLERGET competes for the first time since a fifth-place at the World Judo Masters and will be in action along with Glasgow European Open winner Max STEWART (GBR).

Former world champion Elkhan MAMMADOV (AZE) was one of the most vocal Azerbaijan supporters in the stands in Rio as he watched -100kg compatriot Elmar GASIMOV (AZE) take silver. The Azeri veteran could be signing off from the Grand Slam stage at 34 years old but will still pack the power to trouble the likes of Rio 2016 Olympian Rafael BUZACARINI (BRA) and former world champion CORREA Luciano (BRA).

World Judo Masters winner Daniel NATEA (ROU) won the Zagreb Grand Prix in September in his comeback following an early exit in Rio. World number four NATEA, 24, is far from being the finished product and needs consistent and clinical wins to build himself up as a potential threat to double Olympic champion Teddy RINER (FRA). David MOURA (BRA) had to watch from the stands in Rio as heavyweight colleague Rafael SILVA (BRA) represented the hosts in the heavyweight category and won his second Olympic bronze medal. MOURA has added muscle mass and trained all summer as he awaited the start of the new Olympic cycle and will be looking to stand toe-to-toe with judoka such as former Tyumen Grand Slam bronze medallist Soslan BOSTANOV (RUS) before an expected showdown with NATEA in the latter stages on Sunday.