Written by Nicolas Messner on 02. Apr 2021
Photographs by Gabriela Sabau, Emanuele Di Feliciantonio
Share
Just before the start of the final block of day 2, the Antalya Grand Slam 2021 was officially opened by the IJF President, Mr. Marius Vizer, who declared, "I want to thank the Turkish government, the Governor of the Antalya Region, the National Olympic Committee, the Turkish Judo Federation and the local authorities, for organising the event in a difficult period of time for everyone. We are all crossing this time together and sport remains a good way to bring hope, to be a model and a motivation for the whole of society." 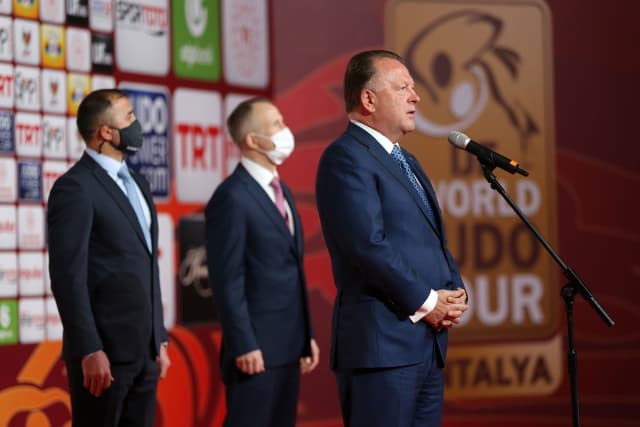 During the ceremony, Mr. Sergey Soloveychik, IJF Vice-President and President of the European Judo Union, said, "Congratulations to the organisers and especially to the president of the Turkish Judo Federation, for organising one of the most important events of the international calendar. I wish everyone a good event and a good route to Tokyo."

Mr. Sezer Huysuz, President of the Turkish Judo Federation also spoke, "during this difficult time, we managed to organise the event, with a lot of effort from everyone. I wish success to all judoka and organisers on the road to the Summer Olympics."

Throughout the second day of competition at the Antalya Grand Slam, as was the case on day 1, we have seen fierce but friendly sports battles, with moral rules and codes being employed alongside a multitude of emotions. In the morning all athletes were looking for medals and sometimes, more importantly, for points, as the main focus is now the upcoming Budapest World Championships and the Tokyo Olympic Games.

On day 2 we also saw the aspirations of the youngest competitors, who are pressing hard in search of recognition and respect, while well known stars are doing everything possible to shine again. This is the law of sport. The second day has brought a bag of interesting fights and a new chapter in that struggle for an Olympic place and much more.

As the the end of the day arrives, Turkey can breathe and celebrate a well deserved gold medal that underlines even more the fantastic work done by the Turkish Judo Federation, not just to organise the event, but also to prepare the team to perform. Great Britain and the Netherlands confirm that they are true judo nations and that we should always count on them for medals, while Olympic champion Fabio Basile was again on fire today. This was definitely a good day of judo, before the third and last day begins on 3rd April at 10:45 am, local time.

-63kg: RENSHALL Wins First Grand Slam in Antalya Fifth in Tbilisi a week ago, Lucy RENSHALL (GBR) obviously found solutions this time to reach the final of the first female category of the day. There she faced the Venezuelan Anriquelis BARRIOS (VEN), third in Tashkent earlier in the season. 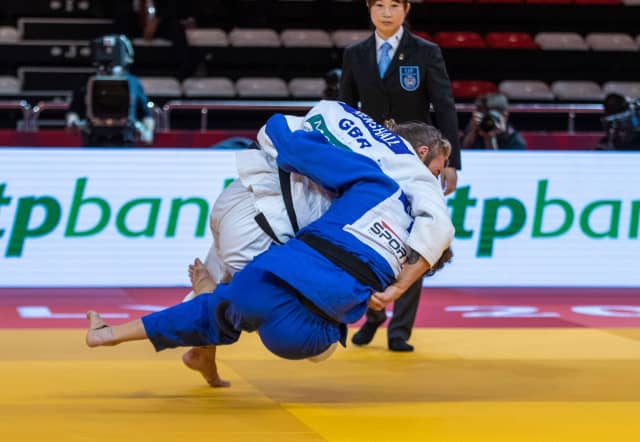 For more than 6 minutes, the final was well balanced, only penalties being distributed, but after two minutes of golden score, Lucy RENSHALL could finally hook BARRIOS's foot with a ko-uchi-gari for a liberating waza-ari. 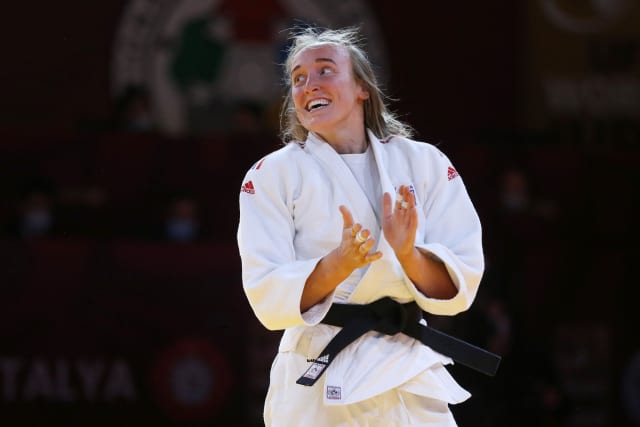 For the first bronze medal, we found the two Chinese representatives, the 19th in the world TANG Jing (CHN) and the 15th in the world YANG Junxia (CHN), for a fratricidal conflict that could well decide the Olympic place for China. Quickly led by a waza-ari score, YANG surrendered a little later due to an injury and left the mat under applause.

Catherine BEAUCHEMIN-PINARD (CAN), who was seeded number one in the competition, did not manage to reach the final, beaten in the semi-final by RENSHALL. She still had a possibility for the bronze medal, against Gili SHARIR (ISR), but it took her almost 6 minutes of golden score to finally win the medal as SHARIR was penalised for the third time. 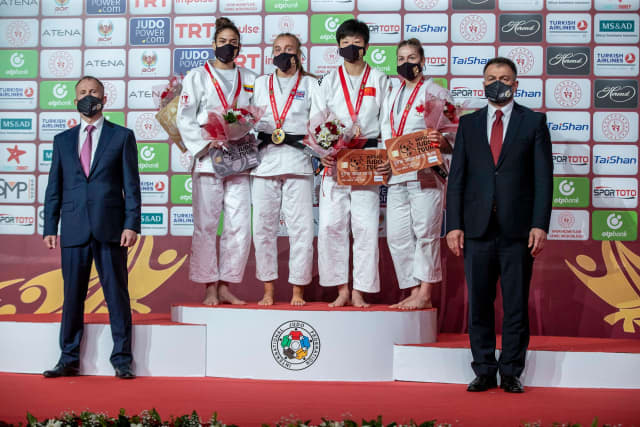 Medal, flowers and prize money were presented by Mr Sergey Soloveychik, Vice President of the International Judo Federation and President of the European Judo Union and Mr Fatih Uysal, Head of Sports Services Department of the Ministry of Youth and Sports of Turkey 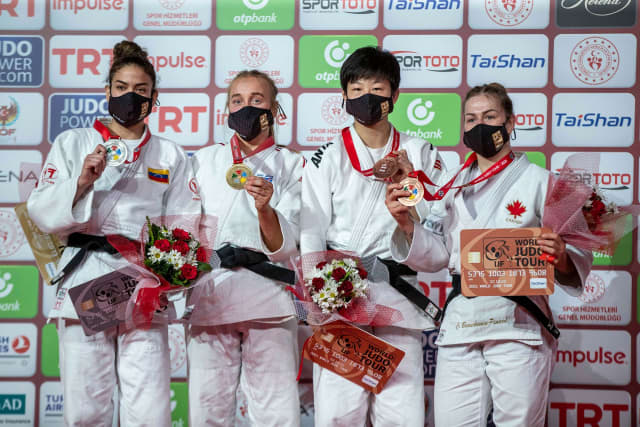 -73kg: BASILE Did it Again When the Olympic champion Fabio Basile is present at a world circuit event anything can happen, the worst as much as the best. Today Fabio was having a good day, reaching the final to find the Turkish judoka Bayram KANDEMIR, having removed all the opponents he found on his path to the final, during the elimination phases. 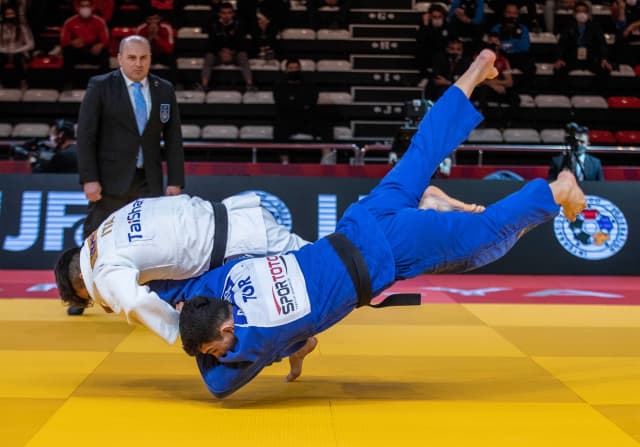 As expected, Fabio BASILE put on a show throughout the final, chaining attacks, sometimes lacking a little preparation, but always incisive and punchy. So it is certain, the grand slam of Antalya is not yet the Olympic Games, but we did not necessarily expect the Italian at such a peak on the morning of the competition in Turkey. All day long he demonstrated that he shouldn't be forgotten in Tokyo and that coupled with his motivation meant anything was possible. The only difference with Rio 2016 is that we know it. This is BASILE's first grand slam gold medal. 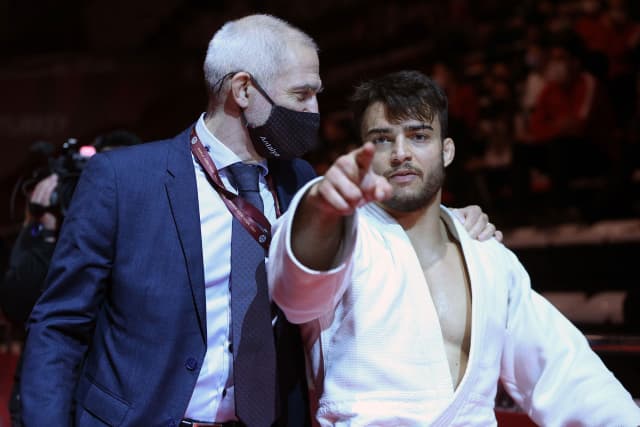 In the first bronze medal contest, the 2020 European Champion Victor STERPU (MDA) faced Adam STODOLSKI (POL), never ranked on the World Judo Tour before. Less than 30 seconds before the end, Victor STERPU won his first grand slam medal with a massive utsuri-goshi, a technique that is not seen that often.

5th in Tel Aviv at the beginning of the season, Tommy MACIAS (SWE) had one more chance to step on to a podium, against Arthur MARGELIDON (CAN), finalist in Tbilisi a week ago. A big smile appeared on MARGELIDON's face after almost one minute of golden score when he scored ippon with a massive ko-soto-gari. 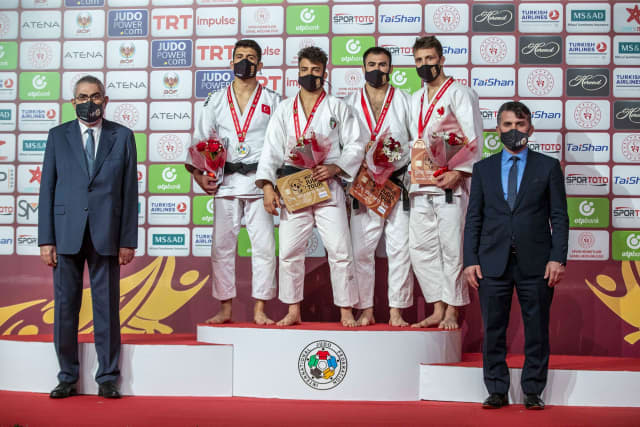 Medal, flowers and prize money were presented by Prof Ugur Erdener, President of the Turkish Olympic Committee and IOC Member and Mr Selcuk Cebi, Head of Sports Services of the Ministry of Youth and Sports of Turkey & 3 time Wrestling World Champion 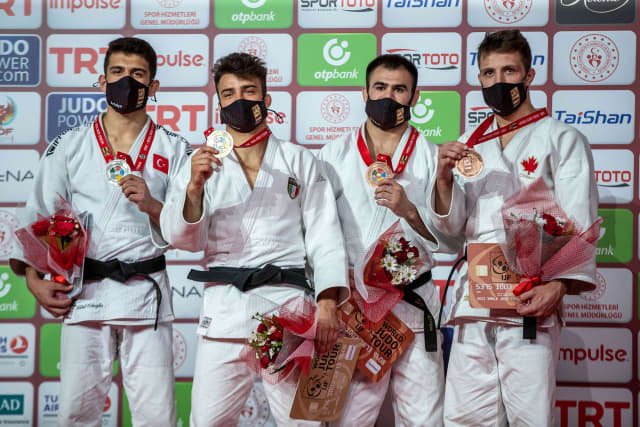 -70kg: POLLING Shines in Antalya Kim POLLING (NED) is no stranger, quite the contrary. Four times a winner of the World Judo Masters and a world medallist, the Dutchwoman found in the final another regular of the international podia, the Croatian Barbara MATIC, second in Tashkent a few weeks ago and winner of the Hungary Grand Slam in October, which was the first event in the resumption of the World Judo Tour. 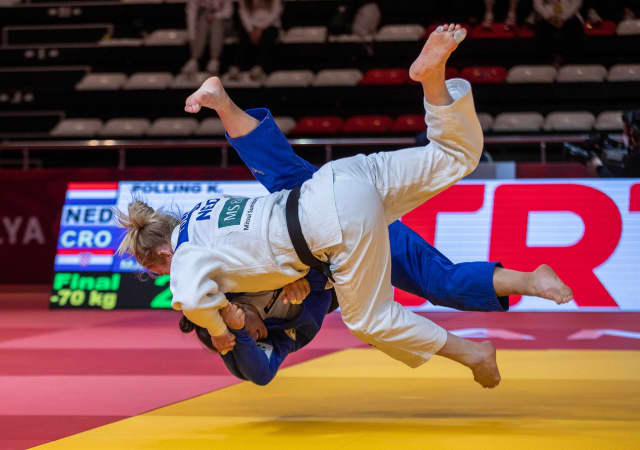 Kim POLLING didn't give any chance to MATIC! After having scored a first waza-ari with a reverse seoi-nage, she executed an almost perfect uchi-mata that was also awarded waza-ari, earning a fifth gold medal in a grand slam for the Dutch star. 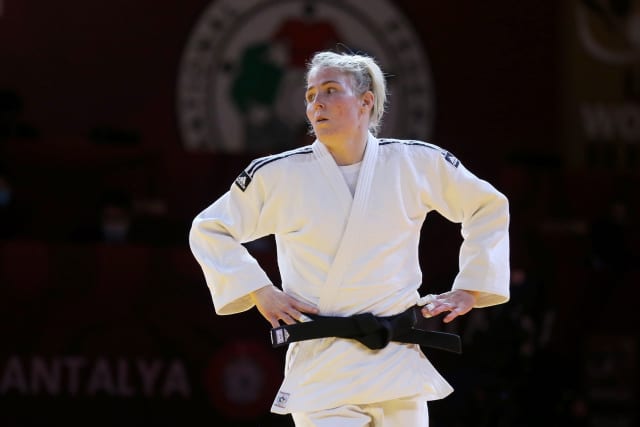 Venezuela has a real school of judo, particularly among women. Elvismar RODRIGUEZ (VEN) proved it once again by reaching the final block, where she was up against the rising star of Uzbek women's judo, Gulnoza MATNIYAZOVA (UZB), third at home not long ago, for the first bronze medal match of the category. This time MATNIYAZOVA was unable repeat her performance from Tashkent and during the golden score was thrown by RODRIGUEZ for waza-ari.

For the other bronze medal, Maria BERNABEU (ESP), second at the 2020 Hungary Grand Slam, was opposed to Minel AKDENIZ (TUR), only ranked 135 in the world before the event. After a golden score period Maria BERNABEU, who was dominating with a powerful grip but without adding the needed throw, finally pinned AKDENIZ for ippon. This is the first bronze medal at a grand slam for BERNABEU, after she became world silver medallist in 2015 in Paris, only defeated by Gevrise Emane (FRA) in the final on that day. 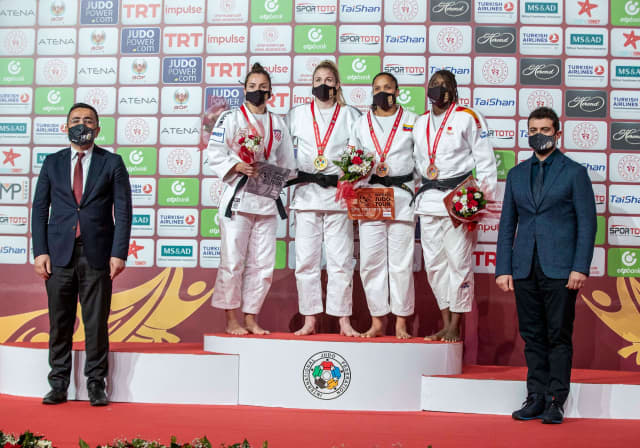 Medal, flowers and prize money were presented by Mr Ahmet Temurci, General Manager of International Organisations and Foreign Relations of the Ministry of Youth and Sports of Turkey and Mr Erdem Aslanoglu, President of the Istanbul Municipal Sport Club President 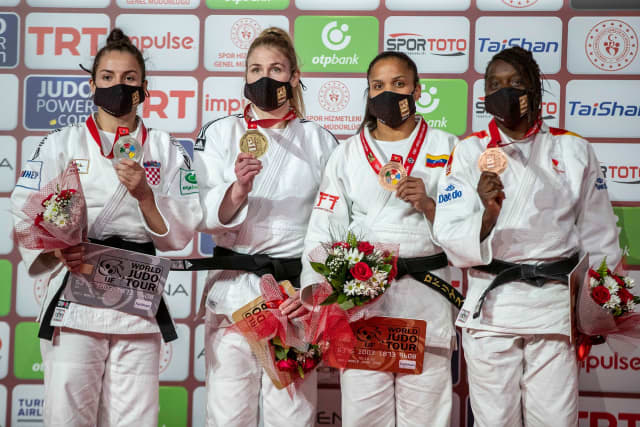 -81kg: Turkey Can Celebrate with ALBAYRAK The host country obtained a second chance for a gold medal, with Vedat ALBAYRAK (TUR) qualifying for the -81kg final, against Christian PARLATI (ITA), already winner of the Tashkent Grand Slam a few weeks ago and who succeeded once again to get out of the pitfalls of the preliminaries, which were numerous. 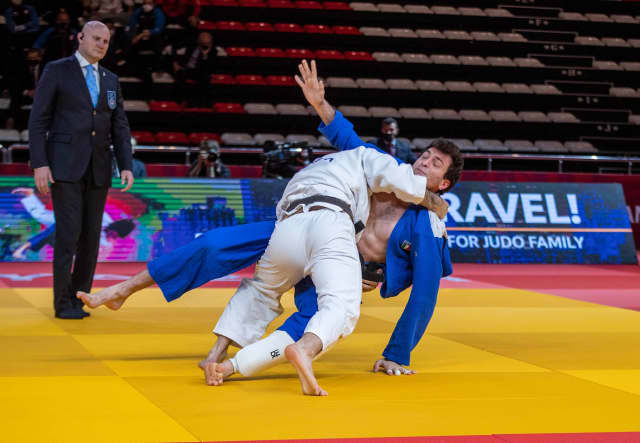 The host country of this Antalya grand slam was expecting their first gold medal! On this second day the spectators, at home, online, had to wait until the last final of the day to celebrate a well deserved title for Vedat ALBAYRAK, who dominated PARLATI. This time the Italian had to accept the silver medal. This gold for Turkey is logical after the performance ALBAYRAK gave throughout the day. Before the start of the competition we were wondering if a home athlete could win this weight category. This was not the case in Israel, nor in Uzbekistan or Georgia, but this time the story was different and everybody can be happy here. 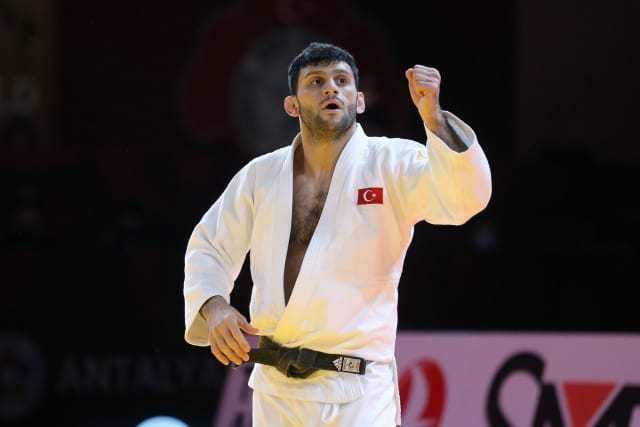 An inspired Italian team placed a new athlete in the final block with the presence of Antonio ESPOSITO (ITA), up against Murad FATIYEV (AZE) for a bronze medal, but the Italian could't stop FATIYEV from winning his second medal at a grand slam, after he scored a waza-ari with o-goshi.

UNGVARI Attila (HUN), who was on the verge of approaching the final, managed to brilliantly infiltrate the last six left in the tournament, to face Robin PACEK (SWE) for the second bronze medal. The final was just not quite in reach. This was a tense and close match with two shido on each side as the athletes were running into golden score. Always ahead of his opponent, UNGVARI Attila seemed to be able to win that battle, but nothing was certain until he was able to counterattack PACEK's sasai-tsuri-komi-ashi attack, for a waza-ari. UNGVARI immediately stood up, convinced that he had scored, which was then confirmed by the video playback. 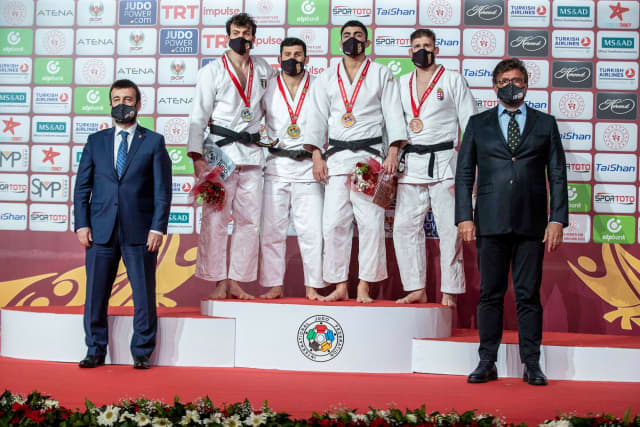 Medal, flowers and prize money were presented by Mr Ömer Altunsoy, Deputy Director General of Sports Services of the Ministry of Youth and Sports of Turkey and Mr Murat Sahin, Vice President of the Turkish Judo Federation 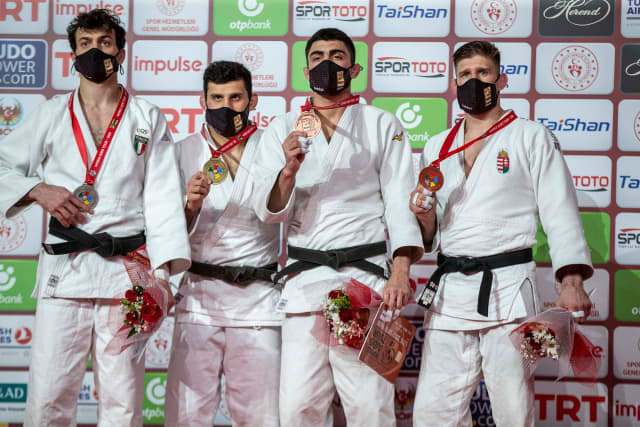