Russia won the first IJF Mixed Team World title on the final day of the Cadet World Championships 2017 in Santiago, Chile, as a global audience tuned in to take a first look at judo’s new addition to the Tokyo 2020 Olympic Games programme.

After four days of individual action, 18 nations contested the new format for judo’s long-running team competition which has a rich heritage and a world-class reputation.

Team judo has appeared at the world level from 1994 and the format and it’s stature has evolved and grown to become a key feature at the sport’s annual World Judo Championships.

Before the world’s top senior judoka take part in the Mixed Team Event for the first time at the 2017 Suzuki World Judo Championships they had an opportunity to watch their country’s fledgling judoka as cadet boys and girls linked up to represent their nation in Santiago with exactly three weeks until their heroes and senior counterparts have their turn in Budapest.

Russia recorded a famous win and a place in the history books in Santiago as they will go down as judo’s first winners of this combined event. 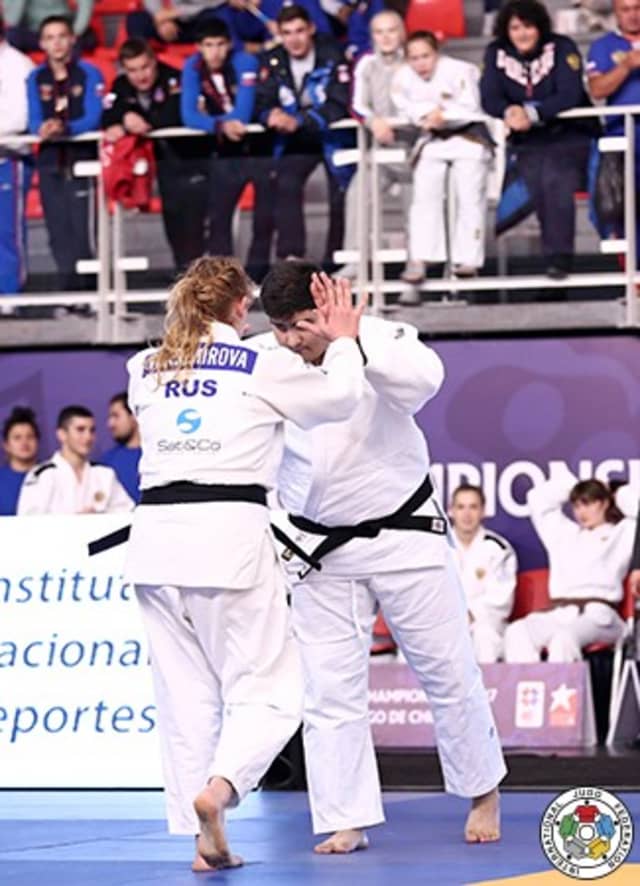 Russia's heayvweights, Daria VLADIMIROVA and David BABAYAN (above), led their team to gold on the last day of the Cadet World Judo Championships

Russia defeated Brazil 5-3 in a thrilling final to win Mixed Team gold and continue their tradition of excelling in team competitions. 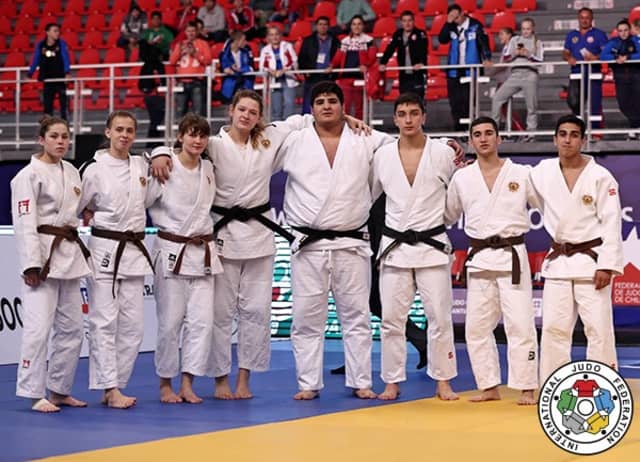 Laura FERREIRA (BRA) got Brazil off to a winning start after a tight contest against Liliia NUGAEVA (RUS). The contest was locked at a stalemate after four minutes but only 18 seconds of golden score was required as NUGAEVA was penalised with a shido for a false attack.

Arman GAMBARIAN (RUS) stopped Brazil from taking command of the match as he earned Russia’s first win by throwing Aristides JUNIOR (BRA) with an uchi-mata for ippon.

The impressive Natalia ELKINA (RUS) put Russia ahead for the first time as she worked until the final seconds to defeat Nicole FRANZOI (BRA). With seconds left of regulation time the Russian applied a juji-gatame and FRANZOI, who was oblivious to the danger of her opponent on the ground as she anticipated only golden score, had no choice but so submit.

Karen GALSTIAN (RUS) added to his country’s lead by seeing off Pedro MEDEIROS (BRA) with a sumi-gaeshi for ippon as Russia were starting to build momentum.

Gabriella MORAES (BRA) reduced Brazil’s arrears by pinning Daria VASILEVA (RUS) for 20 seconds and ippon as she capitalised on a slip by the Russian judoka.

Marcelo GOMES (BRA) did all he could to put Brazil right back into contention with a hard-fought victory over Mansur LORSANOV (RUS). A waza-ari score with 40 seconds left was the significant action of the contest as GOMES left the tatami with his head held high and the match even.

Daria VLADIMIROVA (RUS) put her team on the verge of glory by besting Luiza CRUZ (BRA) of Rio de Janeiro's famed Instituto Reação. CRUZ led by a waza-ari from a harai-makikomi before VLADIMIROVA used the same technique for the same score and the contest moved into golden score. VLADIMIROVA trapped CRUZ with a ushiro-kesa-gatame before adjusting her position into a yoko-shiho-gatame and there was no escape for the Brazilian.

Cadet World silver medallist David BABAYAN (RUS) rounded off an authoritative Russian display with a win against Leonardo SANT’ANA (BRA). BABAYAN sent over his Brazilian adversary with an uchi-mata for a waza-ari and that was how the score stayed as the celebrations started for Russia. 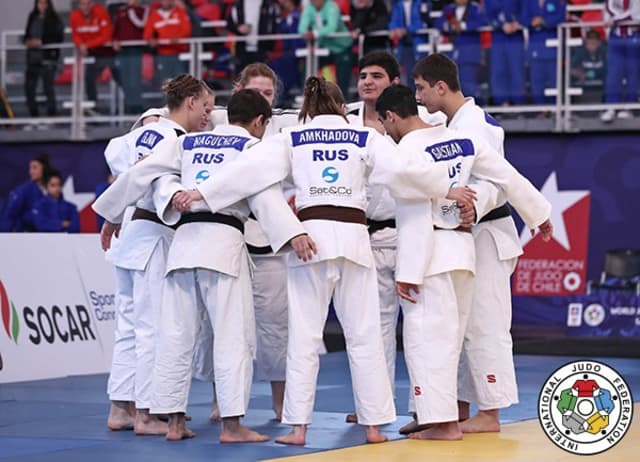 Team talk from the Russian camp who reigned in Santiago

In the first semi-final Russia dispatched Georgia with aplomb. Russia raced to a 3-0 lead but Georgia mounted a spirited fightback to find themselves trailing but alive at 4-2 before the former pulled away and completed a 6-2 victory.

In the second semi-final Brazil ruthlessly dismissed Uzbekistan 8-0 but the latter was missing judoka in two of the eight contests and there was little to separate the country’s in a handful of narrow wins for Brazil.

The first team bronze medals were won by Japan who inflicted a 8-0 rout on the unfortunate Uzbekistan team. There was a subdued mood among the Japanese team in the warm-up area after they lost their quarter-final to Georgia (4-4, Georgia won on cumulative points) and had to come through the repechage against Mongolia (5-3).

KAWABATA Haruka (JPN) was awarded the opening contest without fighting as Uzbekistan did not have a competitor at -44kg.

SUMI Hitoyoshi (JPN) defeated Khurshidbek ABDUSAIDOV (UZB) in golden score from a yoko-tomoe-nage which was worth a contest-winning waza-ari in golden score as Japan doubled their advantage.

Cadet World bronze medallist WATANABE Aiko (JPN) defeated Nilufar ERMAGANBETOVA (UZB) to extend Japan’s lead to 3-0 after throwing her opponent with an uchi-mata after two minutes of golden score for a waza-ari.

Cadet World champion KATSURA Ranto (JPN) scored three times with his uchi-mata against Jaykhunbek NAZAROV (UZB) on his way to increasing his country’s lead. After earning two waza-ari scores from his favoured uchi-mata the Japanese teenager went back to same technique and this time NAZAROV could not limit the damage as he went over flat on his back for ippon.

KOBAYASHI Mina (JPN) made it 5-0 with a narrow win over Sita KADAMBOEVA (UZB) by a waza-ari score to seal the bronze medals for her team. The unassailable lead gave Japan an early win with three contests still to come as Uzbekistan looked to restore some pride and avoid a whitewash.

BANDO Toranosuke (JPN) caught Muzaffarbek TUROBOYEV (UZB) with a ko-uchi-gari after 79 seconds of golden score to make it 6-0.

Cadet World bronze medallist YONEKAWA Akiho (JPN) did not have an opponent which put her team on the verge of going unbeaten in the first bronze medal team match.

Cadet World silver medallist MORI Kenshin (JPN) defeated Chingizkhon SHOKIROB (UZB) by a waza-ari to seal a rout for the favourites who recovered from their semi-final blip to run riot against Uzbekistan.

The second set of bronze medals were won by Georgia in a tense and last-gasp 4-3 win over Germany. Neither team had a judoka to field in the -44kg category which meant that this match would have seven contests. Georgia’s boys won all four of their contests and Germany’s girls won their three contests as the respective strength of both country’s was visible.

As neither team had a -44kg judoka among their ranks, Luka KAPANADZE (GEO) struck first as he defeated 3rd Kyu green belt Severin EDMEIER (GER) by ippon with a ura-nage.

Annika WURFEL (GER) responded immediately by pinning down Ekaterine TATUNASHVILI (GEO) for ippon to bring the match back to level terms.

Mikheili BAKHBAKHASHVILI (GEO) restored Georgia’s lead by catching Mateo CUK (GER) for waza-ari after 33 seconds of golden score. BAKHBAKHASHVILI got in close to his opponent and lifted him with a ura-nage for the contest-winning score.

Cadet World bronze medallists Annabelle WINZIG (GER) and Mariam TCHANTURIA (GEO) squared off in the fourth contest in the second bronze medal match. TCHANTURIA did well to defend a juji-gatame attempt from WINZIG as the latter clearly favoured working on the ground. However, the German judoka sent TCHANTURIA over for a waza-ari with an off balance tai-otoshi and the match was level again.

Vladimir AKHALKATSI (GEO) gave his team edge as they went in front for the third time after Johann LENZ (GER) was thrown with a ura-nage for ippon.

Cadet World silver medallist Hanna ROLLWAGE (GER) submitted Sophio SOMKHISHVILI (GEO) with shime-waza to make it 3-3 as the match went back and forth as Germany’s women and Georgia’s men were inspiring their teams.

The bronze medal match went down to the last contest as Cadet World bronze medallist Jonas SCHREIBER (GER) faced Aleksi SVIANIDZE (GEO) in a heavyweight decider. With their legs tied up and the German off balance, SVIANIDZE drove with his right leg and bundled over his opponent for a waza-ari to seal bronze for his team. 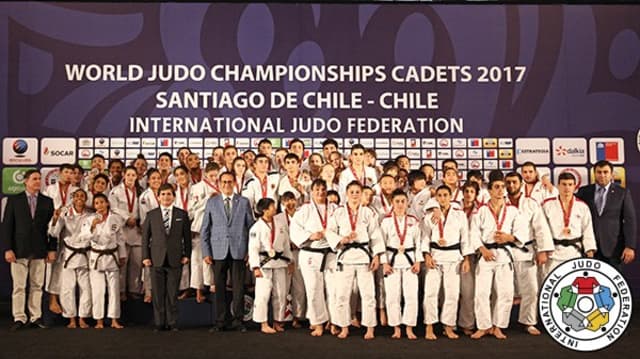