Written by Mark Pickering on 12. Aug 2017
Share
History for Moldova as four different countries win gold for the third day in a row

The third day of competition at the first Cadet World Championships in South America featured 121 judoka across four weight categories with the girls’ -57kg and -63kg categories and boys’ -73kg and -81kg categories all gripping the crowd on a dramatic and emotional day. 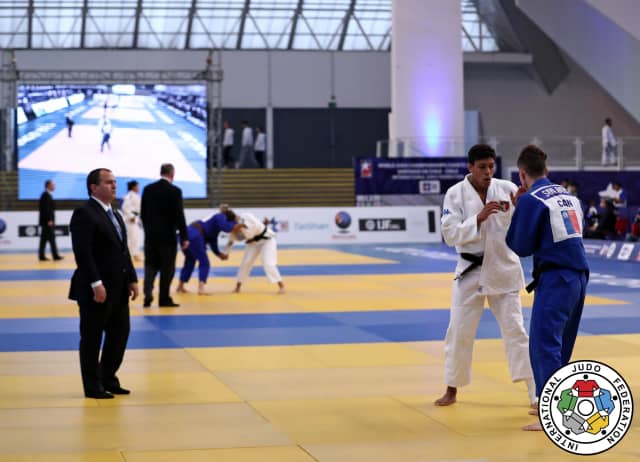 Day three of the Cadet World Championships 2017 in Chile

"We are delighted with the result and the performance of Eugen, it is a very special day in the history of judo in Moldova," said FLORESCU.

"I hope we can go on to achieve similar results in all age groups in the coming years but it is a long process and a lot of work needs to be done."

Heading into the final day of individual action, which will introduce the finest young heavyweights on the planet, Japan remain top of the medal table with three gold, one silver and five bronze medals ahead of Russia who have earned two gold and two bronze medals. Nine different countries have already won gold in Santiago. 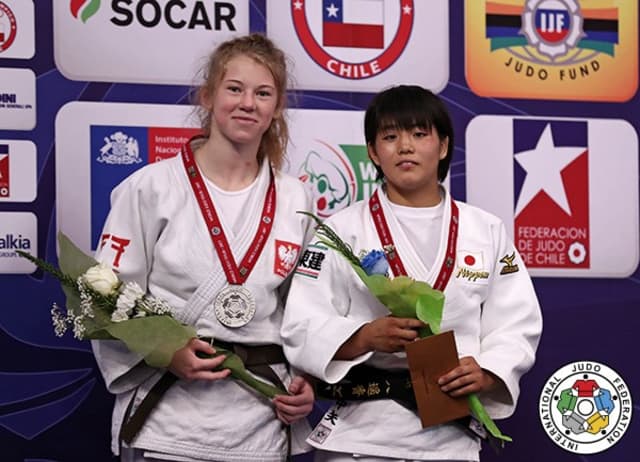 Day four is expected to deliver explosive action in the boys’ -90kg and +90kg categories and the girls’ -70kg and +70kg categories before Sunday’s intriguing mixed team competition.

Tyumen Cadet Cup winner KIM Juhee (KOR) ended South Korea’s wait for a medal in Santiago with a convincing victory on Friday. KIM, who did not concede a single score in five contests, held down 17-year-old EYOF bronze medallist Natalia KROPSKA (POL) in the -57kg final with a tate-shiho-gatame. The Polish judoka was physically spent from her titanic battle in the semi-finals while KIM had energy to spare after negotiating her own place in the final in regulation time. KIM received her gold medal from IJF Hall of Famer KI-YOUNG Jeon and both judoka put their hands on their hearts as the national anthem of South Korea was played for the first time at the Santiago National Stadium. 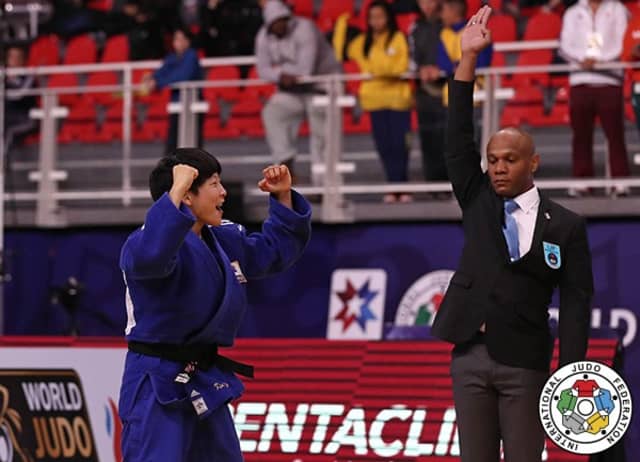 In the first semi-final KROPSKA defeated 17-year-old former Berlin Cadet European Cup bronze medallist NAKAYA Haruka (JPN) after one of the most remarkable and longest contests in IJF history. After going the distance there was nothing to separate the gold medal hopefuls and their opening four minutes would prove to be just a warm-up. KROPSKA was feeling the full effects of a long day in regulation time as both judoka wore themselves out ahead of subsequent medal contests. As the clock ticked by in golden score the crowd became more and more involved.

Seconds, then minutes went by, as both judoka summoned every ounce of energy from their shell-shocked bodies and while they tired their minds and will to win kept them moving. All the teams of judoka and coaches and spectators were out of their seats in appreciation for the efforts of the two 17-year-old’s and their applause was the reward they deserved for their commitment. The applause grew louder and louder as the contest passed the 10 minute mark in golden score alone and it was the Polish judoka who ended a compelling contest - that everybody present in Santiago will remember – with a waza-ari score. The final time of the contest was 14 minutes and 56 seconds and the fighting spirit of both was as memorable as it was appreciated by all those fortunate enough to witness the greatest contest of two judoka honestly and earnestly going about their craft on the biggest stage of their careers.

In the second semi-final 15-year-old Thayane LEMOS (BRA) fell to KIM by a waza-ari score from a seoi-nage to guarantee her team their first medal of the competition.

The second bronze medal was won by NAKAYA who somehow found a way past EYOF silver medallist Marica PERISIC (SRB). NAKAYA, who was still recovering from her unforgettable semi-final, again went into golden score but grinded out a medal with a drop seoi-nage for a waza-ari after three minutes of added time. 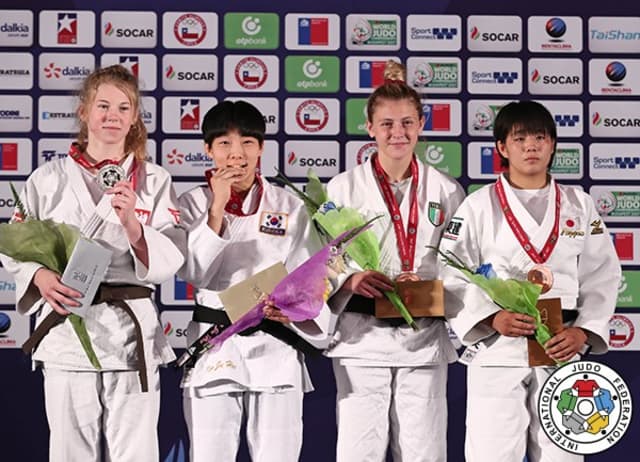 Japan’s third gold medal in Chile came courtesy of 17-year-old YUKI Ayano (JPN) who edged past Cadet Pan American Championships winner Gabriella MORAES (BRA) in golden score. The Brazilian was second best during regulation time but had done enough to force golden score by not conceding a score. A shido for a false attack saw MORAES – who appeared to be troubled by an existing injury – take silver as YUKI could look forward to climbing to the top of the podium. 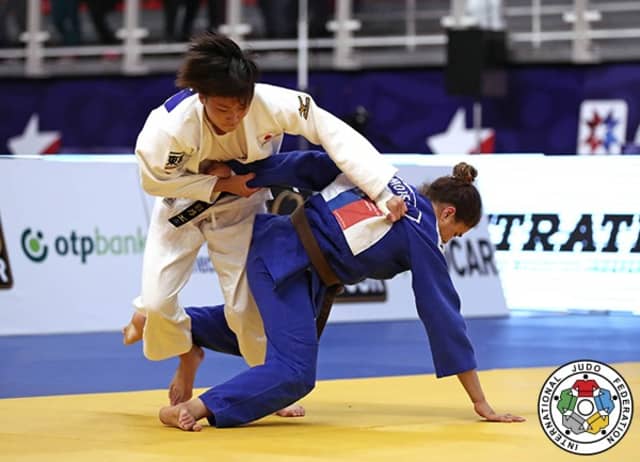 In the first semi-final YUKI bested 16-year-old Cadet European Championships silver medallist Annabelle WINZIG (GER) by a waza-ari score. In the second semi-final MORAES had a waza-ari advantage when her opponent 16-year-old KIM Su Yon (PRK) had to withdraw due to injury.

The first bronze medal was claimed by Mariam TCHANTURIA (GEO) as KIM could not compete due to injury. TCHANTURIA, who won her previous contest with a sensational ura-nage, showed that the Georgian team are making good on their promise to bring the women's ranks up to the level of their revered men's team.

The second bronze medal was won by WINZIG who conquered Meriem KHILIFI (TUN) by ippon for the final place on the -63kg medal podium. 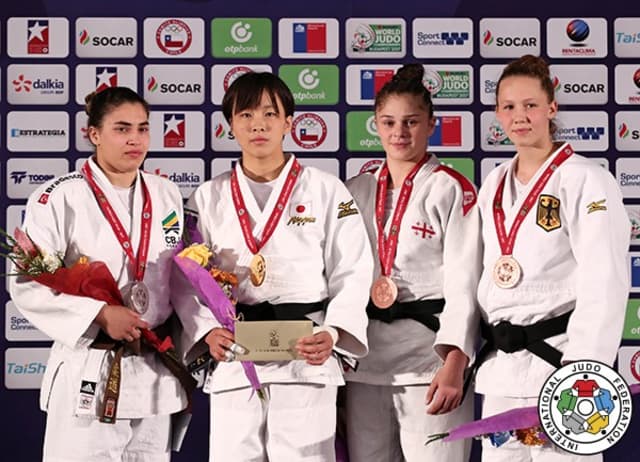 Cadet European Championships gold medallist Lasha BEKAURI (GEO) won his fourth competition in a row and the most important title of his career with a flurry of ippons. Tbilisi-based BEKAURI erased the hopes of former Cadet Asian Championships bronze medallist NAKAHASHI Daiki (JPN) in the final by ippon as the latter tried to manoeuvre to get behind his opponent and the Georgian anticipated it and countered for the maximum score. 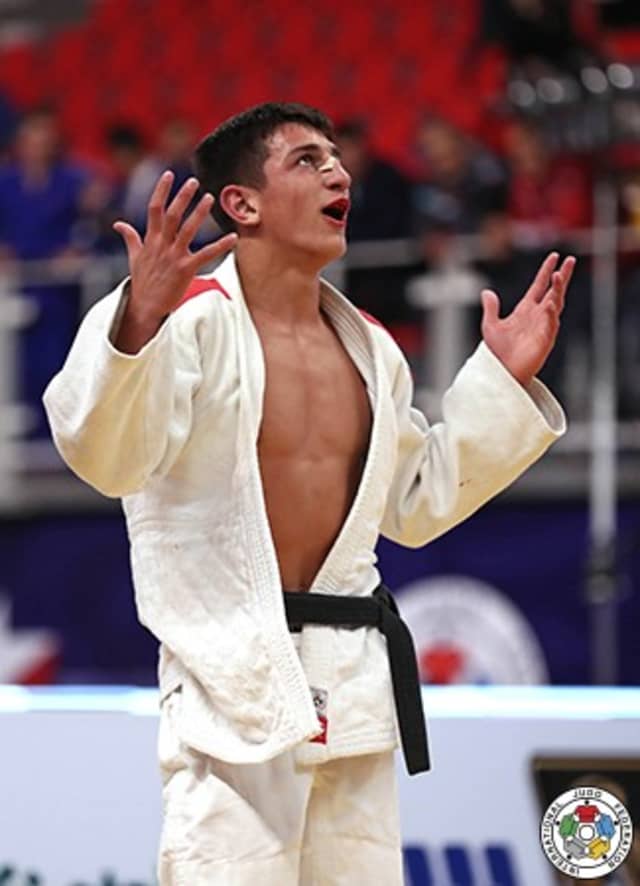 In the first semi-final BEKAURI lifted up Teplice Cadet European Cup winner Adam STODOLSKI (POL) with a huge ura-nage for ippon. In the second semi-final unknown Ayman ELHOUSSAINI (MAR) was thrown by NAKAHASHI via his sublime uchi-mata after 27 seconds.

The first bronze medal was clinched by Cadet European Championships bronze medallist Armen AGAIAN (RUS) against ELHOUSSAINI as the Russian ended the contest with its only score in the form of a waza-ari from a koshi-guruma.

The second bronze medal was won by EYOF winner Muhammed KOC (TUR) who defeated STODOLSKI after two minutes of golden score with a ko-uchi-gake for a medal-winning waza-ari. 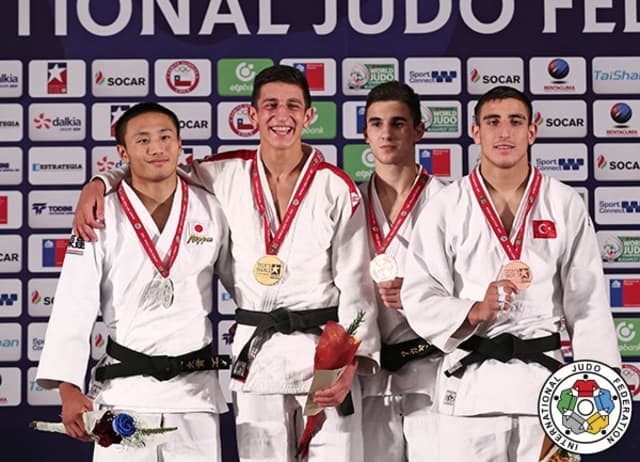 -81kg: Momentous day for Moldova as MATVEICIUC breaks new ground  EYOF and Cadet European Championships bronze medallist Eugen MATVEICIUC (MDA) won the heaviest weight category on day three in the most successful day in the history of Moldovan judo. MATVEICIUC, who cites French heavyweight king Teddy RINER as one of his inspirations, had form coming into this competition and Moldova’s leading young gun did not disappoint as he completed his dream day by beating Cadet Pan American Championships winner Agustin GIL (ARG) in the -81kg final in golden score by a shido. 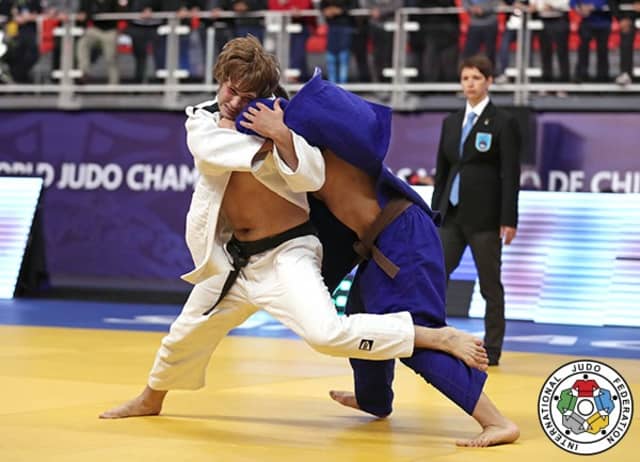 This landmark result for Moldova could just be a taster of what’s to come as the Moldova Judo Federation signed an agreement with the IJF in February during the Paris Grand Slam to become part of the IJF Judo for Schools programme that is now running in over 40 countries.

In the first semi-final Cadet Asian Championships winner MADZHIDOV Dzhakhongir (TJK) could not match MATVEICIUC who floored his opponent in golden score with a ouchi-gari for a match-winning waza-ari. In the second semi-final GIL defeated EYOF and Cadet European Championships silver medallist TOTH Benedek (HUN) in golden score. With the scores tied at a waza-ari apiece after four minutes, additional time was required and after two further minutes it was GIL who came out victorious with a uchi-mata for a waza-ari score.

The first bronze medal was won by TOTH over 17-year-old Cadet Asian Championships bronze medallist Muzaffarbek TUROBOYEV (UZB). In a disjointed contest, as the their styles did not blend well together, the Uzbek launched a weak attack after two minutes of golden score and TOTH had just enough control and momentum to claim the waza-ari.

The second bronze medal was claimed by Serikbolsyn SHYNTAS (KAZ) who pinned down MADZHIDOV for 20 seconds from the comfort of being a waza-ari to the good from the opening minute. 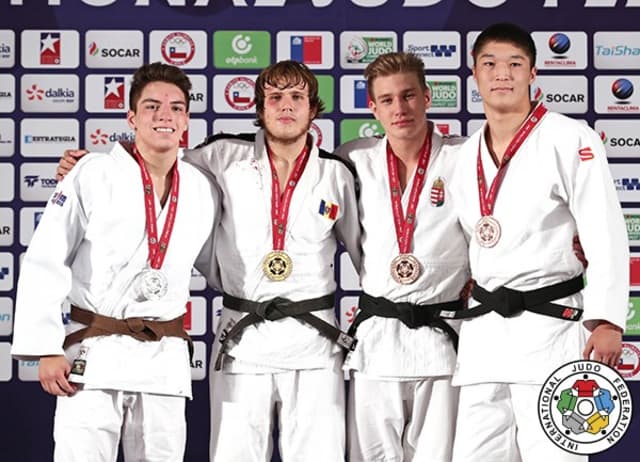