Written by Pedro Lasuen on 21. Sep 2019
Share
Everyday of Tashkent Grand Prix, we propose you the technical analysis of an IJF expert. Today, Cathy Fleury, IJF supervisor and former World and Olympic Champion. 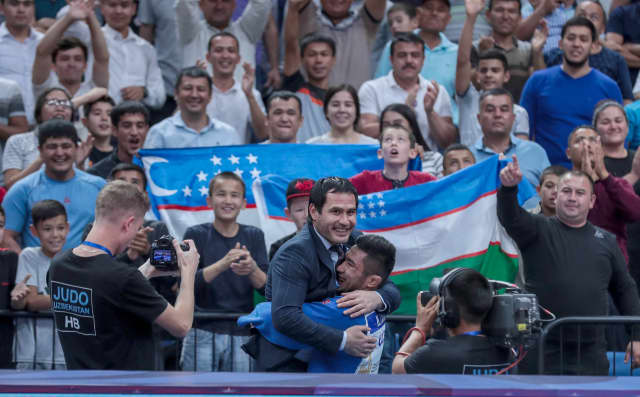 Let’s be honest, only two weeks after a World Championship, the level of Judo cannot be very high because the best judoka are not here. This is normal. However, I have seen some really interesting things.

Most of the contenders here in Tashkent are young. This is why it is such a good tournament for the young generation. It is not very demanding since world champions did not come but it gives people the opportunity to taste the top level, the World Judo Tour.

We must not forget that these young people are the champions of tomorrow. In here, they get experience.

Speaking of which, today I have seen many shidos, most of them very stupid. And the reason of that is because there is a lack of experience at this level.

I did like a lot those fights with an unpredictable ending. Take the men’s -73kg final. Tajikistan Behruzi Khojazoda is way ahead. He is dominating, attacking and he scores a waza ari. For 3.59 nothing bad seems that could happen to him. And then he made the biggest mistake of his career. This is judo. Even if you are stronger, even if you are ahead, you can never ever think that you have won before the end of the match.

It happened to him. Uzbekistan Khikmatillokh Turaev scored a waza ari in the last second and from that moment Khojazoda had already lost the mental battle. After the mental side comes the physical side. It is the perfect example of what has to be done and what has to be avoided in judo. Remember, we were talking about experience. Khojazoda is not a junior, he has experience and yet, he made that incredible mistake.

Among the ladies I want to focus on Elisavet Teltsidou. I have seen her improving a lot and today she produced a great judo. She is very explosive, she likes close combat but the difference between the past and now is that she has improved her kumikata. It has now well built and executed moves. She first places one hand and then continues until the end of the move.

Let me finish with the match between Sharofiddin Boltaboev and Rigaqi Nai. When it happened I did not know it was the fastest ippon ever. That is just amazing but I want to say that it happens because of that lack of experience that I mentioned earlier.

It is of course great for the show, the fans and for television but I like to think about what the Chinese will learn from this huge and cruel lesson and I’m sure he won’t make this mistake ever again. So I hope he will take it as a positive thing, not the opposite.

So yes, it was a good day of judo, interesting and fun at the same time. This is why that kind of event is so necessary.

Catherine (Cathy) Fleury, born June 18, 1966 in Paris, is a French judoka who has distinguished herself in the category of -61kg. She won the gold medal at the 1992 Olympic Games in Barcelona, ​​when women's judo entered the Olympic program. Cathy Fleury was also World Champion and the first French woman, all sports combined, to win the three major competitions (Olympic Games, World Championships and European Championships). She later became national coach in France and now officiates as an expert of the International Judo Federation.