Written by Nicolas Messner on 27. Mar 2021
Share
The second day of a World Judo Tour tournament like the Grand Slam in Tbilisi is always more compact, with only four weight classes competing, but it is still a particularly dynamic and spectacular day. This one was no exception to the rule.

The second day of a World Judo Tour tournament like the Grand Slam in Tbilisi is always more compact, with only four weight classes competing, but it is still a particularly dynamic and spectacular day. This one was no exception to the rule.

From 10am the matches took place one after another, following a fast rhythm on a little air of Adjaruli or Baghdadouri (traditional Georgian dances). Yet, several nations have demonstrated their ability to learn local dances quickly. Mongolia thus won a second gold medal, with TSEND-OCHIR Tsogtbaatar, after the title of MUNKHBAT Urantsetseg on the first day. This fine performance, especially knowing that TSEND-OCHIR won two weeks ago in Tashkent, allows Mongolia to take the lead in the ranking of nations, ahead of Georgia.

Canada comes out strongly with two finalists, including a title, while Brazil and Belgium beat the odds in two still hotly contested categories.

There are several great deadlines to come and it would take a diviner to draw conclusions now. Those who were in good shape today, will they still be in a few weeks? Those who have suffered, will they find the necessary resources to improve their level? We are far from having all the answers and the next deadlines are only becoming more interesting. Before that, there will be another beautiful day of judo, Sunday 28th March, in Tbilisi.

-63kg: BEAUCHEMIN-PINARD Opens the Canadian Harvest For the Day The Canadian team was in great shape during the second day of the Tbilisi Grand Slam and it began with Catherine BEAUCHEMIN-PINARD, who confirmed her role as the favourite of the competition by qualifying for the final, where she found YANG Junxia ( CHN), who had not appeared on an international podium since her bronze medal in 2019 at the Abu Dhabi Grand Slam. 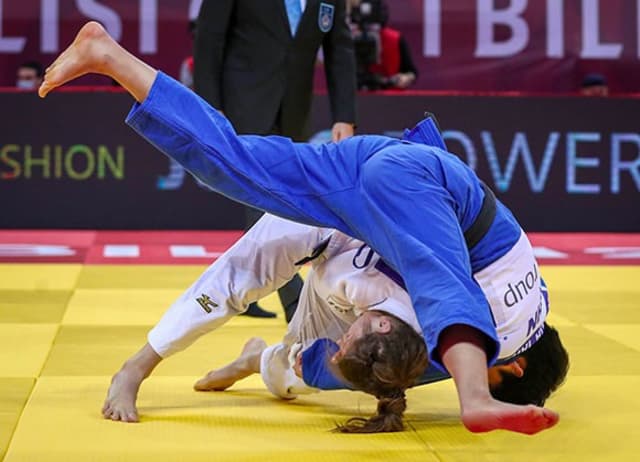 The final started with two athletes trying to control the opponent, but with especially uncertain sequences on the floor, where both competitors seemed capable of gaining the upper hand. It was finally BEAUCHEMIN-PINARD who found the opening, in a standing position, after very tight control of the sleeve to slip under with a low kata-guruma for ippon. 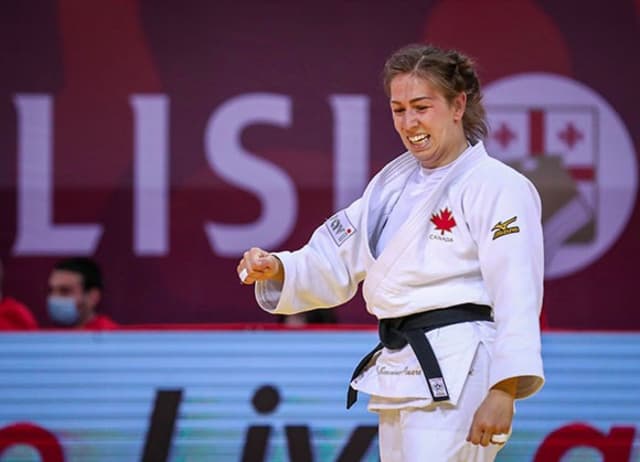 OZBAS Szofi (HUN), barely 19 years old, is one of those young judoka who are growing, after having emerged in the juniors, now showing their nose at the seniors, without any fear. Junior world champion in 2019, bronze medallist in Budapest in 2020, the young woman was again present during the final block of a world circuit event, for the bronze medal, against the Dutch fighter Geke VAN DEN BERG, whom is doing well in Tbilisi again, having been a finalist here in 2019. VAN DEN BERG took the lead with a strong counterattack and she doubled the score a short while later to win her first medal in a grand slam.

Lucy RENSHALL (GBR) found her way back to the final block, for the second bronze medal, against the winner of the 2019 Ekaterinburg Grand Slam, Daria DAVYDOVA (RUS). After thirty seconds of the golden score period, the Russian could finally counterattack one of the numerous hip throw attempts of RENSHALL, to win the bronze. 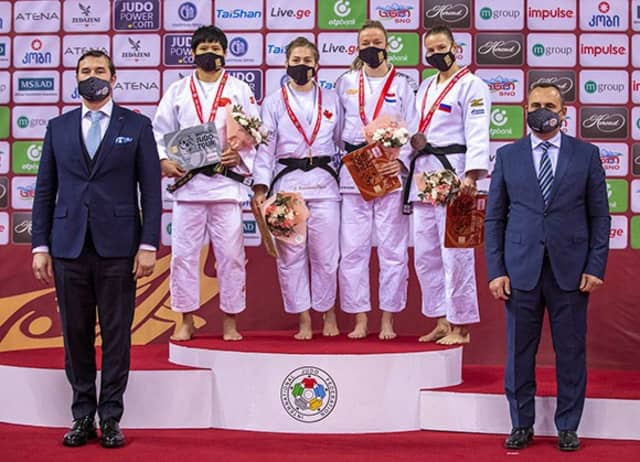 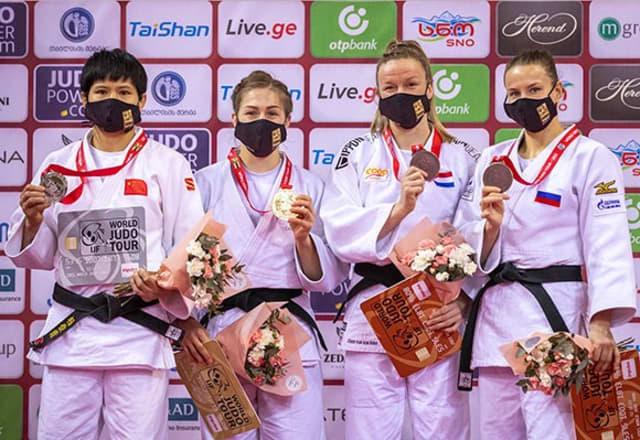 -73kg: Second Victory in a Row for TSEND-OCHIR For the second consecutive final, Canada was present, with a fine performance from Arthur MARGELIDON. It must be said, once again, that the Canadian is not really a stranger. Seeded number one in Tbilisi, he finished in a good third place in Budapest in 2020. This time, MARGELIDON is moving up a gear. In the final he found TSEND-OCHIR Tsogtbaatar (MGL), already a winner in Tashkent two weeks ago, who in the semi-final had shattered the gold medal hopes of Kosovan judoka Akil GJAKOVA (KOS). 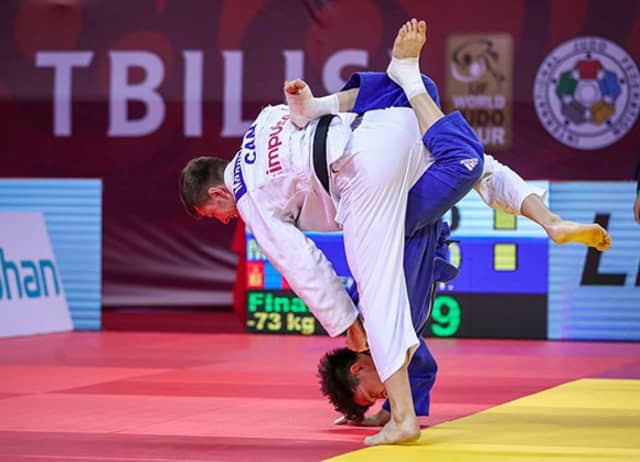 This was an interesting final, with some very good attacks from the Canadian, even if he always looks like engaging with a slow motion seoi-nage, only controlling the end of the sleeve, but with some very impressive escapes from the Mongolian. With two shido beside his name, TSEND-OCHIR looked a little behind, when he suddenly engaged with a ko-uchi-gari that scored a waza-ari. TSEND-OCHIR then just had to keep control for a few more seconds and pay attention to not receive a third shido, to win a second grand slam in a row. 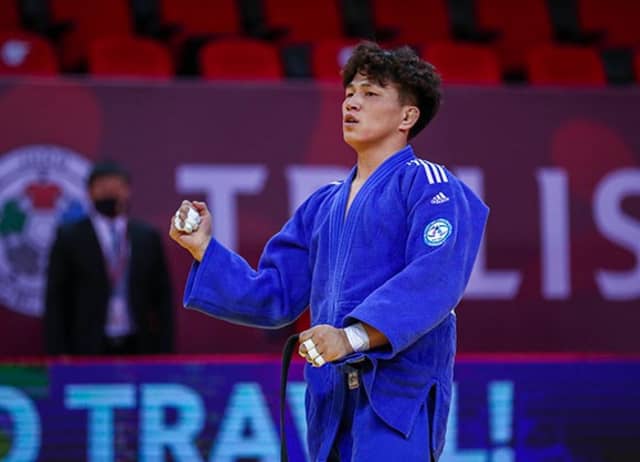 In the first match for a bronze medal, it was an old acquaintance of Georgian fans and of the judo world who stepped on the tatami. Lasha SHAVDATUASHVILI is none other than the London 2012 Olympic champion and Rio 2016 bronze medallist and he still has the motivation to win medals. In front of him, Akil GJAKOVA (KOS), winner of the Budapest Grand Prix in 2019 and who wants to continue to prove that Kosovo is also becoming a nation that matters for men, but after receiving a third shido, GJAKOVA was defeated, offering the medal to Georgia and SHAVDATUASHVILI.

The second Georgian present in the final block is part of the young generation of athletes who already have their feet in the doorway and who intend to rush into the breach to inscribe their name in the pantheon of renowned Georgian competitors in the years to come. Aleko MAMIASHVILI (GEO) was up against the thirty-something, experienced Russian Denis IARTCEV. After a very exciting match, where both athletes scored waza-ari, eventually Aleko MAMIASHVILI could get closer to IARTCEV to introduce an o-uchi-gari, driven all the way to the floor with perfect control of the upper body and a perfect and clear ippon. 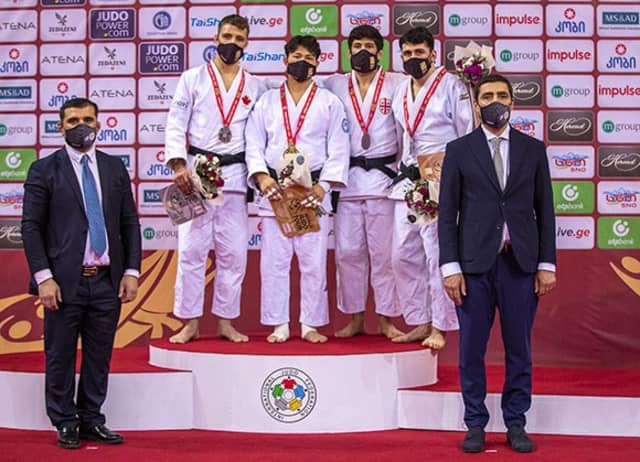 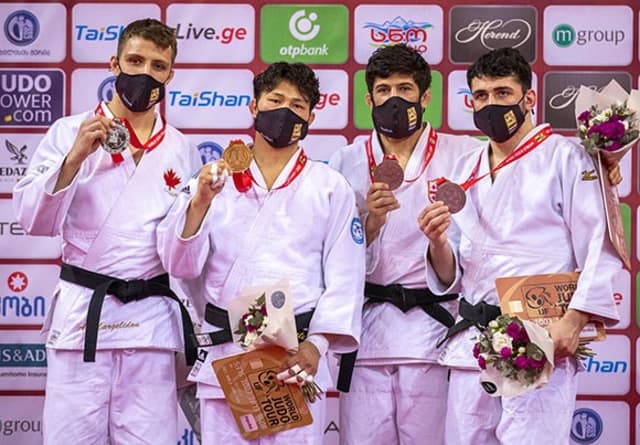 -70kg: PORTELA Adds One More Gold to Her Prize List  It was not good to be among the top favourites in the -70kg group, as many of them were eliminated from the competition prematurely. The first finalist is however not a newcomer, Maria PORTELA (BRA), already having a good prize list to her credit with 9 grand slam medals so far, before the start of today's final. In front of her, a young Russian, Madina TAIMAZOVA, already a finalist in Doha this year and who, with each of her outings, shows more and more confidence. 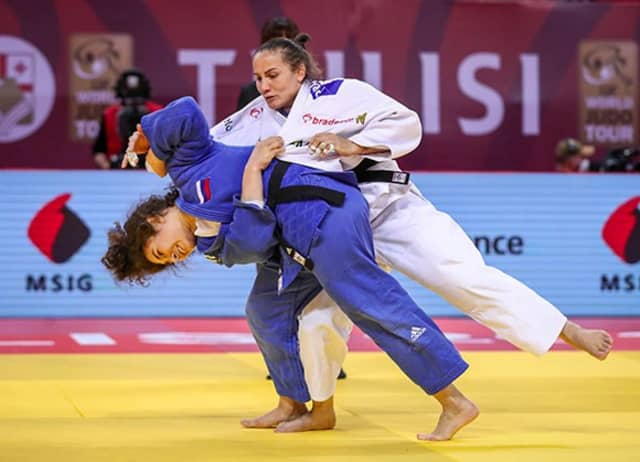 The final was not the most spectacular of the day, as shido started to rain over the two competitors, the third one being awarded to TAIMAZOVA for grabbing under the belt, giving the opportunity to PORTELA to win one more gold medal on the World Judo Tour. 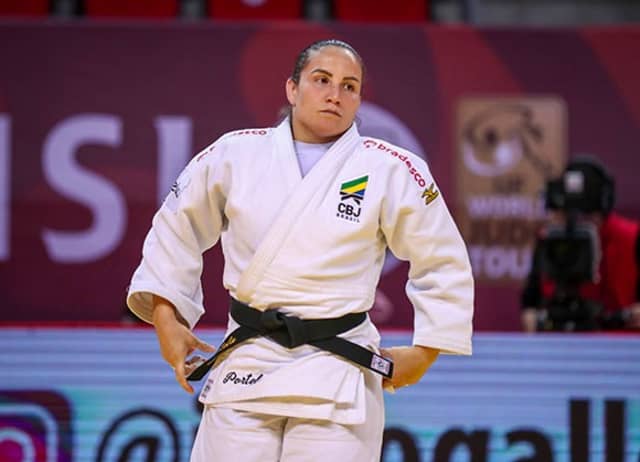 Fifth in Tashkent, two weeks ago, Anka POGACNIK (SLO) offered herself one more chance to stand on a podium, against Gulnoza MATNIYAZOVA (UZB), who in Tashkent recently, raised a whole people up with her beautiful bronze medal, but once again POGACNIK lost out to MATNIYAZOVA with a spectacular uchi-mata for waza-are. 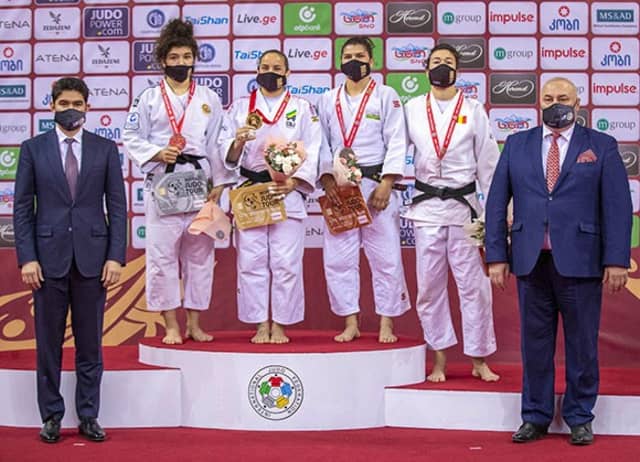 Medal, flowers and cheques were presented by Mr Azizjon Kamilov, President of the Uzbekistan Judo Federation and Dr Zurab Kakhabrishvili, Head Doctor of the Olympic Team of Georgia 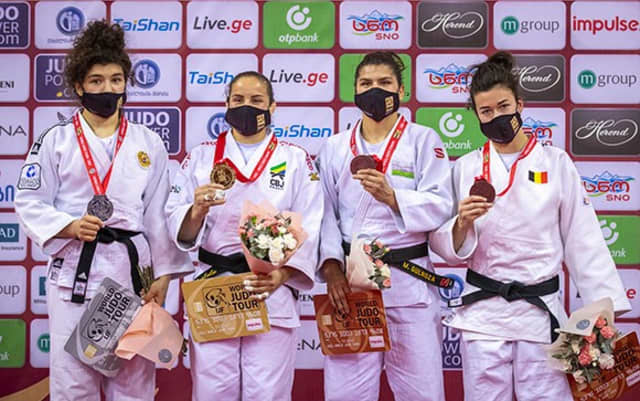 -81kg: CHOUCHI Hit a Big Blow in Tbilisi The -81kg category is always one of the most anticipated and one that offers a great show. Once again, this was the case throughout the second day of competition in Tbilisi. Seed number one, Tato GRIGALASHVILI (GEO) made the powder ignite right up until the semi-final. He found in his way the Belgian Sami CHOUCHI (BEL). No doubt the Georgian thought that this would be a formality, but against all expectations, CHOUCHI sent GRIGALASHVILI back to his studies, to find in the end another surprise, the Austrian Shamil BORCHASHVILI, winner against world and Olympic medallist Antoine VALOIS-FORTIER, also in the semi-final. 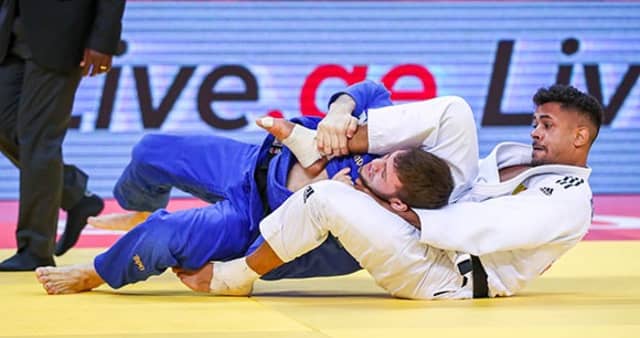 After only twelve seconds, BORCHASHVILI took a very strong lead, when he scored a magnificent ippon that was logically changed to a waza-ari, based on the video. Maybe a little unfocussed or maybe simply because CHOUCHI was on fire the whole day, the Belgian caught his opponent with a shime-waza that left no chance for BORCHASHVILI. With this important victory, CHOUCHI comes back into the race for Olympic qualification in Belgium, where Matthias CASSE is his main rival. CASSE, who was not competing in Georgia, remains the world number one though. 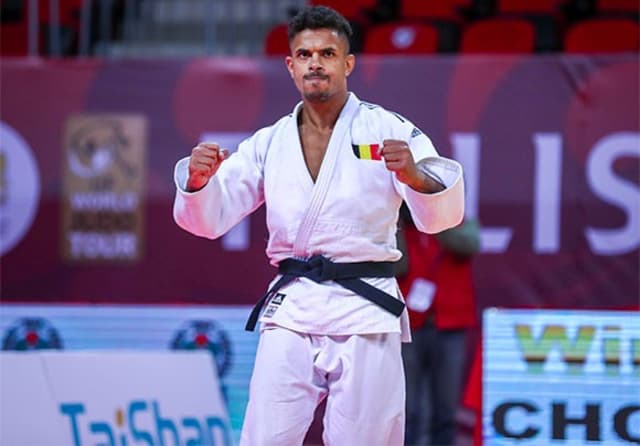 After the massacre of the preliminary phases, we found for a first bronze medal, Murad FATIYEV (AZE), without reference yet on the world circuit and the experienced Antoine VALOIS-FORTIER (CAN), but due to an injury, the Canadian couldn't compete for another possible Canadian medal. Murad FATIYEV thus won the bronze medal.

To complete the podium Alan KHUBETSOV (RUS), winner of a prior grand slam, back in 2014 in Baku, was matched against Tato GRIGALASHVILI (GEO), who finally won the bronze medal after a third penalty was given to KHUBETSOV for passivity. This is definitely not the medal GRIGALASHVILI came here for, but this is an important medal nonetheless. 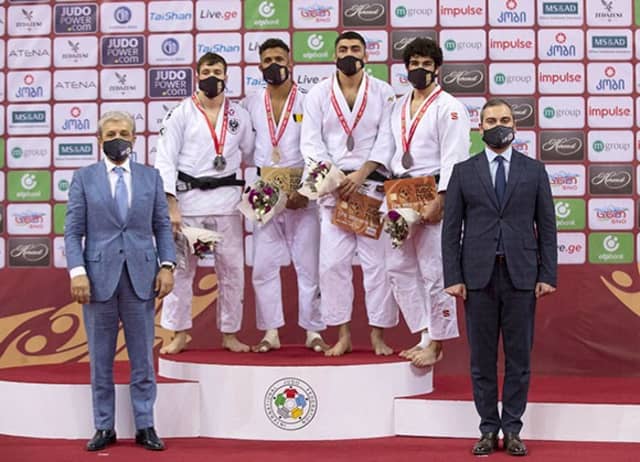 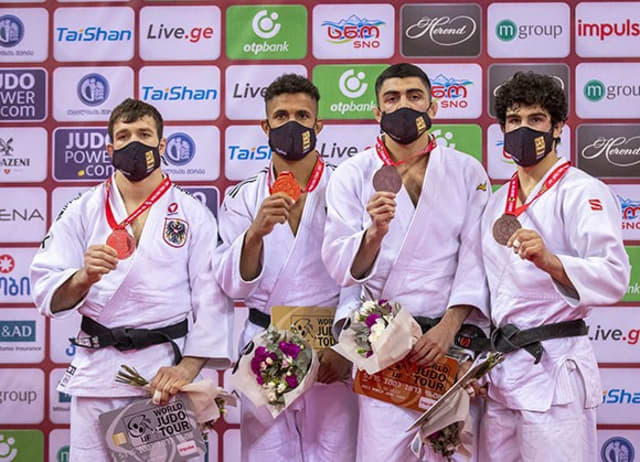