Written by Nicolas Messner on 16. Sep 2021
Share
Winner of the -52kg category at the Paralympic Games a few weeks ago in Tokyo, Algerian athlete Chérine Abdellaoui was recently appointed as United Nations Goodwill Ambassador to Algeria. 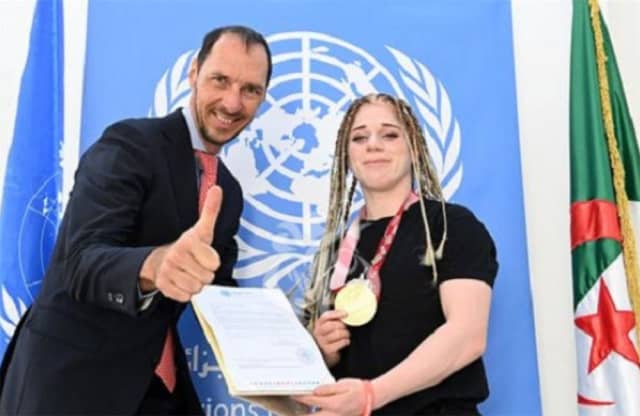 She had the honour of receiving her letter of designation from the hands of His Excellency Eric Overvest, Resident Coordinator of the United Nations System in Algeria.

"We have selected Chérine Abdellaoui for this position of Goodwill Ambassador because she embodies our values perfectly. She represents an example to follow, in terms of courage, tolerance, perseverance and teamwork, because through her gold medal in Japan, she gave formal proof that even with a handicap, you can accomplish great feats," said Mr Overvest, before specifying, “We are going to organise various events during the upcoming year, with associations as well as with the general public and Chérine Abdellaoui will be invited in her capacity of Ambassador of Good Will."

Walking in the footsteps of Salima Souakri, who was already Ambassador for UNICEF, Eric Overvest said he was "very happy" to have Chérine Abdellaoui as Ambassador for the UN.

"This appointment as UN Ambassador is a second joy for me, after winning my gold medal in Tokyo. I am truly honoured, especially since this position will be an opportunity for me to serve the national sport in a new way" indicated the Paralympic champion. "When I'm on the tatami, my goal is to win titles, to represent the national colours well and above all to please the people, but through this new role of Ambassador, I hope to be able to act on other fronts, in particular by conveying messages of ambition, optimism and self-confidence, especially for young people."

Congratulations to Chérine Abdellaoui for her magnificent gold medal and for this exemplary and progressive nomination.