Chad Sets Up an IJF Dojo

Written by Nicolas Messner on 21. Dec 2021
Share
For the fourth time, the International Judo Federation has built a dojo in Africa, as part of its plan to continue the development of judo. This time it was Chad that benefited from the expertise of the IJF.

The new installation, the idea for which was initiated some years ago, was inaugurated on 17th December in Chad’s capital, N'Djamena, in the presence of the Minister in charge of sports, members of the government, the presidential advisor in charge of athletes and many guests, including many national federation presidents from various sports.

During the inauguration, the government representative said, “I would like to thank you for this gathering. I can only express my greatest satisfaction with being able to  attend the inauguration of this new dojo in our dear city. We are inaugurating a tool which belongs to you athletes, which was initiated by you and which will be put at your service. I would like to congratulate the Chadian Judo Federation and its President, Mr Abakar Djermah, for the work done in the service of sports development. Chad will always be by your side as much as possible. This dojo will help support the selection of our athletes for the Paris 2024 Games. I would also like to extend my warmest thanks to the International Judo Federation, all the engineers and all those who have contributed to this great success."

Abakar Djermah, President of the Chadian Judo Federation, declared, "Allow me to take advantage of this solemn moment to recall that we wanted to give this dojo the name of a great man, Dalou Ladar, who contributed a long time ago, training our judoka. He was a man who guided and directed our choices, who had a sense of honour and worked with sincerity and who taught us the moral code of judo. He taught us excellence.

After my first meeting with the President of the IJF, Mr Marius Vizer, in 2011, I launched the project to build a dojo in Chad. For years we practised judo on surfaces of 4x4m in difficult conditions. The dream was to one day be able to create a dojo respecting the rules of international competition, as a legacy to all Chadian judoka. Today in 2021, it is done. This dojo has been a dream for several generations. Today we are lucky to have this opportunity and we will have to maintain it and use it to the maximum. I invite all the national federations to work hand in hand with their international federations. Today we can make our dreams come true through our young athletes. I would like to conclude by thanking the International Judo Federation, which has set an example here in Chad."

If the project was already born ten years ago, it is because the phase of preparation and obtaining all the authorisations was long, but the construction itself only took two weeks thanks to the hard work of the IJF technical team, the construction team and volunteer judoka.

Felix Fofiu, Chief Engineer of the IJF Dojo Project explained, "When we initiate such a project, there is a long preparation phase. The first part is about researching if the project is feasible. Then we need all the authorisations from the local authorities. When we can finally start the construction, we first build the concrete slab, with the help of local companies. In parallel, the structure of the building is made in Spain by Vall Structures. This take roughly one month. After everything is shipped we can start the final phase and that part, here in Chad, took two weeks.

We spent several years studying different solutions. The Centre is made of two buildings: the locker rooms and the dojo itself. I designed the concept and I coordinate everything from beginning to completion. Here we had four mounting experts from the Spanish manufacturer and up to 10 local volunteer judoka, who were really helpful and who are the reason we finished the construction so fast." 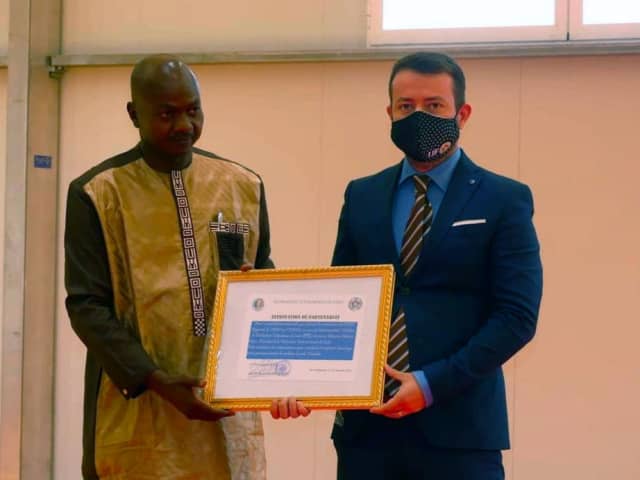 Mr Fofiu was clearly proud and at the inauguration he also spoke, "On behalf of the International Judo Federation and the IJF President, Mr. Marius Vizer, we are proud to inaugurate the dojo which we built for the benefit of the Chad Judo Federation and the entire Chadian Judo Family. We hope that it will serve an accelerated development of judo in Chad and the entire region. Thank you President Abakar Djermah and the judoka who helped the building of the dojo."

After years of training in difficult conditions, this dojo opens up new opportunities for judo in Chad as well as in the region, as was the case in Zambia and  Mali for instance, where the IJF have built other dojos in recent years. For all the judoka this inauguration was an extraordinary gift at the end of this year. We wish them good luck and all the best for the future.”

• Locker room building: 107 m2, divided into two locker rooms, for men and women, each equipped with showers and toilets.

• The dressing rooms building and the concrete slab of the dojo were built by a local construction company and with local materials.

• Dojo: 650 m2 hall, designed mainly for judo training, but which can be used for competitions also.

• The dojo is made out of a high-strength aluminium frame structure, very easy to transport and to install (two days).

• As for the shell of the building, a system that gives protection against the heat from outside was chosen.

• The dojo is equipped with 30 LED light projectors, automatic emergency exit lights and plenty of sockets. Air extractors will ensure the ventilation of the dojo.