Written by Nicolas Messner on 06. Mar 2021
Photographs by Gabriela Sabau, Emanuele Di Feliciantonio
Share
The host team of this first Tashkent Grand Slam awaited its first medal with the entry of Sharofiddin BOLTABOEV in the middleweight final, but the gold medal was not awaiting him at the end of the day. BOLTABOEV has shown throughout the day that his victory two weeks ago in Tel Aviv was a sign of great form. You will have to pay close attention to this dynamic technician to find a mistake, but there was one today in the final and it cost him the title, but he has a great potential.

Japan continued to dominate the debates with two more titles today, while Mongolia also accumulated an additional title. After two days of competition, 19 countries have already reached the podium. Considering the Japanese domination this number is impressive. It once again demonstrates the dynamism of international judo. During the last day of competition we will find on the tatami of the Humo Arena, the heavyweights, still an amazing show is ahead us.

-63 kg: TASHIRO Concludes the Day With Gold The hierarchy of the category was perfectly respected with the two top seed athletes, TASHIRO Miku (JPN), already the winner of three World Judo Masters and Andreja LESKI (SLO), finalist of the last Grand Slam in Tel Aviv, found themselves in the final after a series of serious and flawless victories during the preliminary rounds. 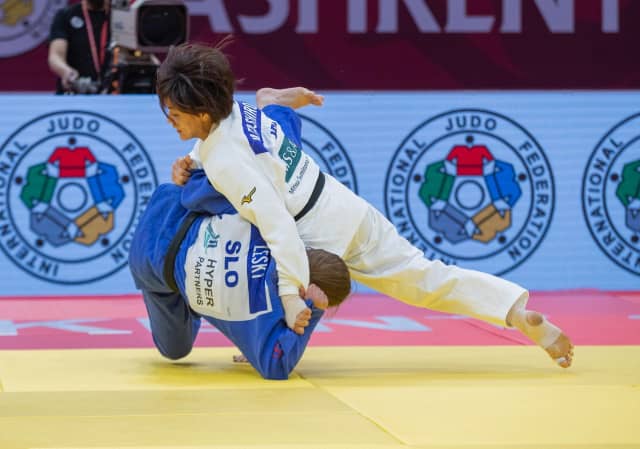 In less than one minute, TASHIRO Miku found the solution to throw Andreja LESKI for ippon with a ko-soto-gari, putting an end to a very, very fast and spectacular final block appearance. 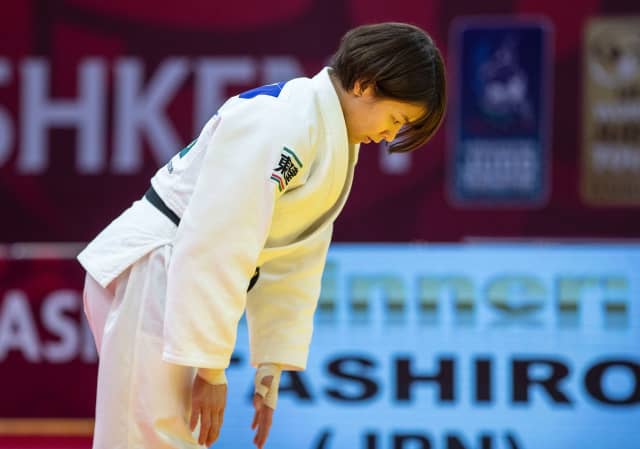 In the first match for the bronze medal we found Daria DAVYDOVA (RUS), third in the Hungarian Grand Slam last October and Anriquelis BARRIOS (VEN), who had failed at the foot of the podium in Doha in January, but this time the Venezuelan didn't miss the opportunity to step on the podium with a winning sumi-gaeshi.

After more than a year without results, Amy LIVESEY (GBR) faced BOLD Gankhaich (MGL), third in Düsseldorf last year, for the second bronze medal match. 16 seconds were enough for LIVESEY to score an ippon with a perfect uchi-mata. 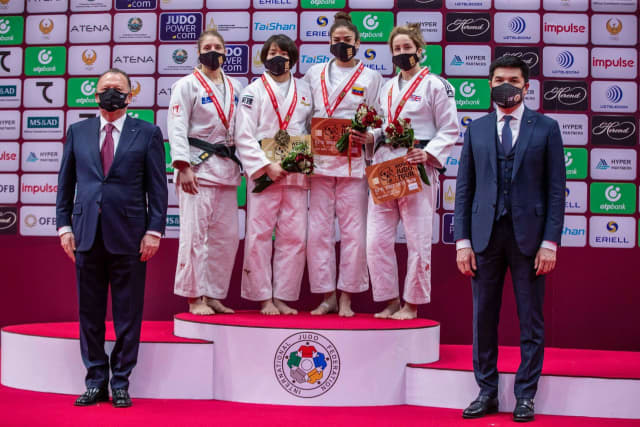 Medals, prize money and flowers were presented by Mr Marius Vizer, President of the International Judo Federation and Mr Oybek Kosimov, General Secretary of the National Olympic Committee of the Republic of Uzbekistan 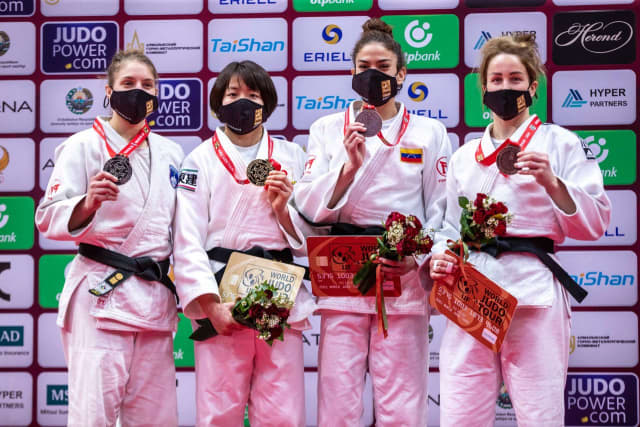 -73 kg: Mongolia Tops the Medal Podium with TSEND-OCHIR It was difficult for the favourites of the category today, as the top four seeds, Rustam ORUJOV (AZE), Tommy MACIAS (SWE), Victor STERPU (MDA) and Somon MAKHMADBEKOV (TJK) were all eliminated during the preliminary rounds, with the only survivor being Rustam ORUJOV, having an entry into the repechage. Eventually it was the day of Zhansay SMAGULOV (KAZ) and TSEND-OCHIR Tsogtbaatar (MGL), who stepped forward into the final. 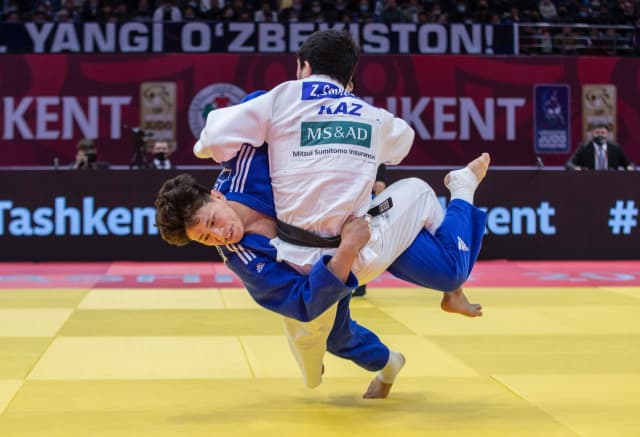 After a very tight match and in the golden score period, Zhansay SMAGULOV thought he had scored a ippon but after checking the video the Kazakh was clearly grabbing under the belt to execute his movement. Both athletes having already two shido to their name, SMAGULOV was awarded a third penalty, synonymous with victory for TSEND-OCHIR Tsogtbaatar. 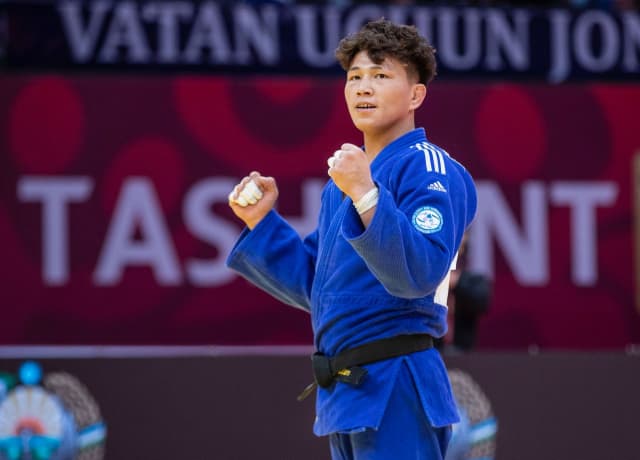 Rio Olympic Games silver medallist Rustam ORUJOV (AZE) could consol himself by reaching the bronze medal match against Obidkhon NOMONOV (UZB), who had the full support of the home crowd. Despite this support, NOMONOV couldn't avoid being thrown for waza-ari with a precise sumi-gaeeshi, one that ORUJOV was capable of saving until the end of normal time.

Since his victory at the Tbilisi Grand Prix and his bronze medal in Antalya a few weeks later, back in 2019, Guillaume CHAINE (FRA) was looking to get back on track to be able to compete at the highest level. Today the Frenchman delivered a nice performance during the preliminary rounds; the most important one being his clear victory against Olympic Champion, Fabio Basile (ITA), in the third round, before he was defeated in the quarterfinal by the Uzbek Obidkhonvs NOMONOV. For the bronze medal contest, CHAINE faced Ferdinand KARAPETIAN (ARM), second in Tel Aviv last year. CHAINE thought he had done enough by scoring waza-ari with an acrobatic uchi-mata, but KARAPETIAN replied with an aerial movement for ippon this time. 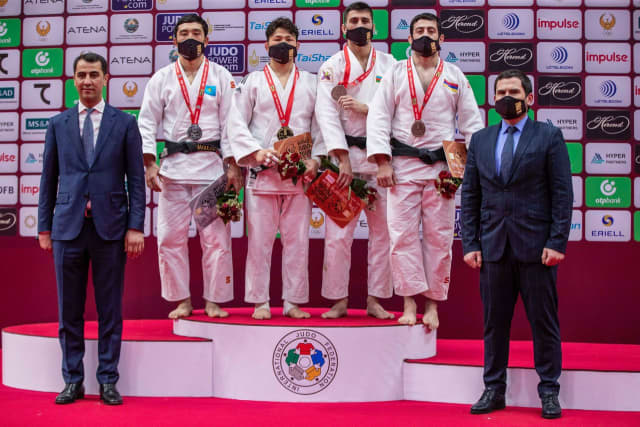 Medals, prize money and flowers were presented by Mr Ravshan Irmatov, First deputy minister of Physical Culture and Sport of the Republic of Uzbekistan and Mr Bekzod Turaboev, Vice President of the Uzbekistan Judo Federation 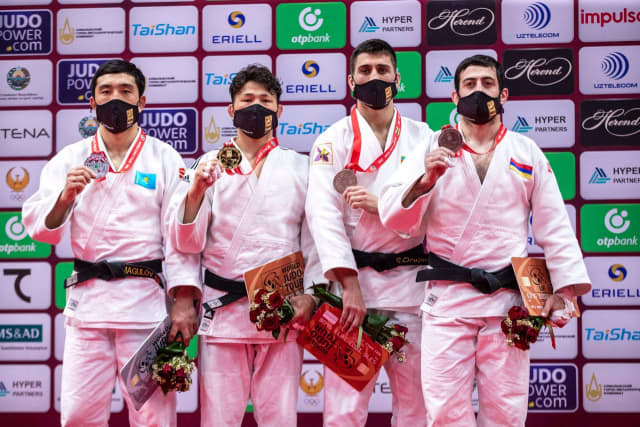 -70 kg: Japan Scores Again with ARAI ARAI Chizuru (JPN) was focused today. The double World Champion and 21 time World Judo Tour medallist and top seed here in Tashkent, confirmed that she was among the strongest of the category by entering the final against Barbara MATIC (CRO), already the winner of Grand Slam Hungary in October, that marked the come back of the World Judo Tour after the Covid-19 outbreak. The gold medal went to ARAI Chizuru with a victory by waza-ari. 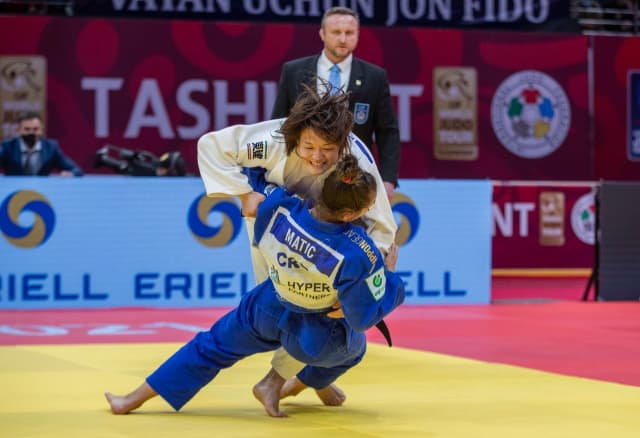 It was not to be this time, for Elvismar RODRIGUEZ. Despite several medals won on the circuit, she missed out on the final and once again competed for a bronze medal, against Ellen SANTANA (BRA), bronze medal winner in Düsseldorf in 2019. After almost one minute of golden score, RODRIGUEZ scored a waza-ari with an o-soto-gari, to win the first bronze medal of the category. 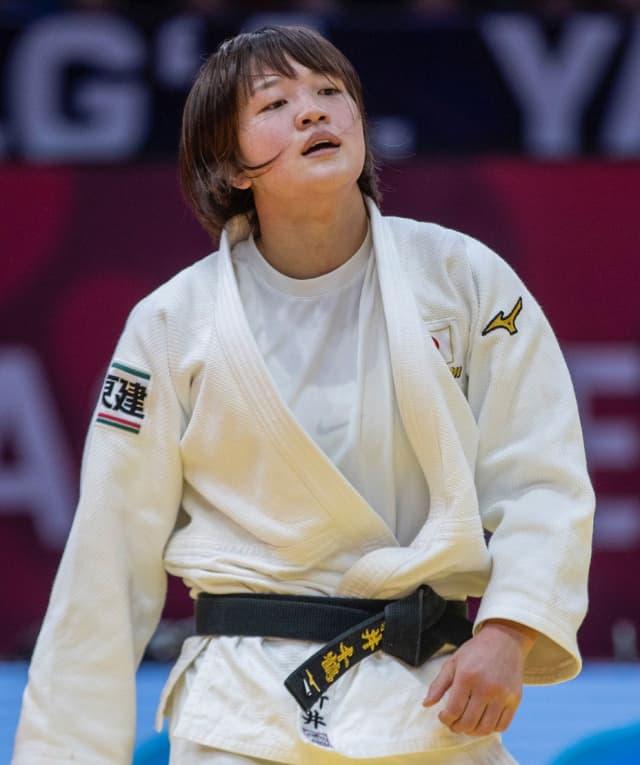 Never a medallist at a Grand Slam, Anka POGACNIK (SLO) was opposed to the local Gulnoza MATNIYAZOVA (UZB), who represents the future of Uzbek judo focusing on building a women’s team. It was the Uzbek who actually concluded the match within a few seconds with a massive hip-movement for a clear ippon. 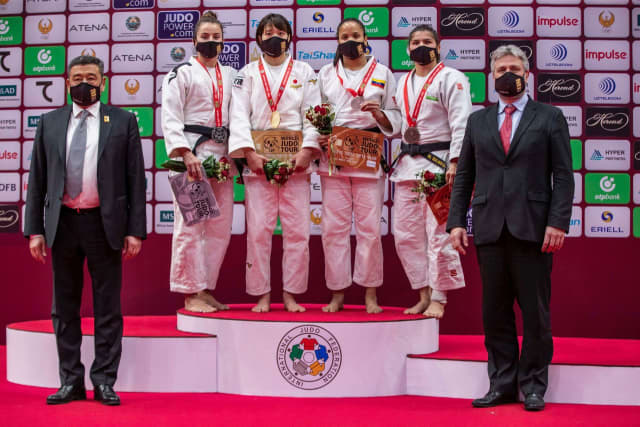 Medals, prize money and flowers were presented by Mr Rustam Shoabdurakhmanov, President of the National Olympic Committee of the Republic of Uzbekistan and Mr Nicolas Messner, Director of the Judo for Peace Commission and Director for Media of the International Judo Federation 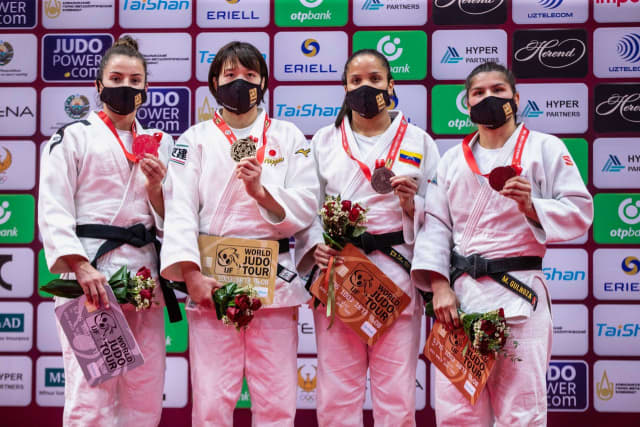 -81 kg: Italian PARLATI Thwarts all Predictions We expected a lot from this category, which, on paper, was one of the toughest of the competition and we were not disappointed, even if the expected rematch of the Tel Aviv final between Saeid MOLLAEI (MGL) and Sharofiddin BOLTABOEV (UZB) did not take place. MOLLAEI was effectively eliminated in the first round by Korean LEE Moon Jin (KOR), while BOLTABOEV continued on his way to the final, showing incredible effectiveness and perfect technique. In front of his audience, that were in heaven, BOLTABOEV was opposed to the surprise of the day, the Italian Christian PARLATI, the unexpected winner against NAGASE Takanori (JPN) in the semi-final. 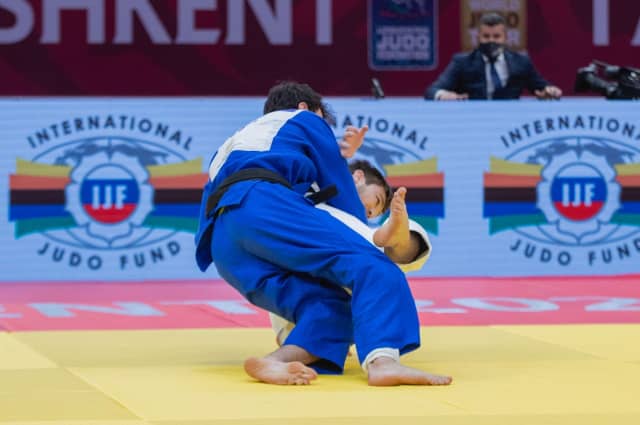 It seemed to be obvious that the victory couldn't escape from BOLTABOEV, but judo is not an exact science and against all starting predictions, Christian PARLATI, in golden score, concluded his day of competition in the best possible way, a waza-ari that offered him the gold medal. 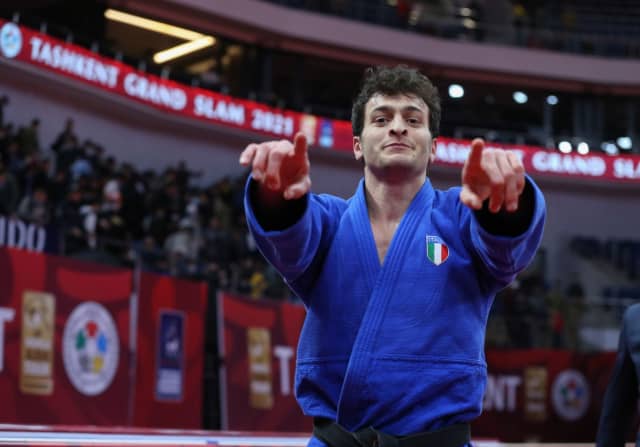 In the first bronze medal contest, we were pleased to see the dynamic judo of Ivaylo IVANOV (BUL), who faced another stylist, NAGASE Takanori (JPN). With less than 30 seconds on the scoreboard and after IVANOV had shown the potential to bother NAGASE, the latter finally executed a perfect o-uchi-gari that almost turned into uchi-mata, for ippon, to win the bronze medal.

The last bronze medal contest was 100% Belgian as Sami CHOUCHI faced Matthias CASSE and as each athlete knows the other perfectly they had a lot of trouble to make the difference, the final victory going to CHOUCHI with an opportunistic counterattack for waza-ari. 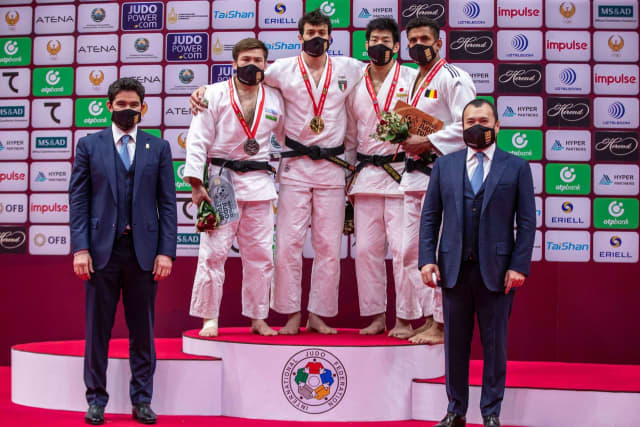 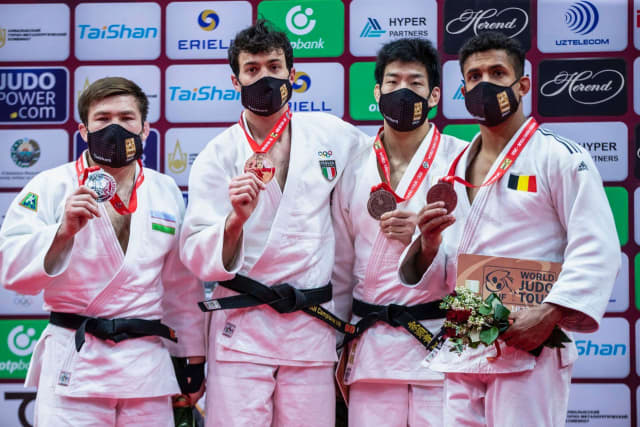