Written by Nicolas Messner on 07. Mar 2021
Photographs by Gabriela Sabau, Emanuele Di Feliciantonio
Share
The third and last day of competition has just ended in Tashkent, on the occasion of Uzbekistan’s first ever grand slam and it was a success from all points of view. With nearly 500 competitors and 71 participating countries, the level was particularly high. The weeks go by and we feel that the prominent deadlines of the season are fast approaching. In just a few weeks, the world circuit will stop in Tbilisi, Georgia, before Antalya in Turkey and Kazan in Russia and at the beginning of June the International Judo Federation will organise its world championship in Budapest, Hungary. If all eyes are already on the Tokyo Games, the events of the World Judo Tour, by the summer, will attract the attention of judo fans from every continent.

Once again, we saw a Japanese team winning medals, particularly the gold ones. Behind the tallies we still felt the Japanese were sometimes a little feverish and lacking rhythm, which is quite normal a few months before the Games. Uzbekistan did not have its gold medal, but with six medals, including two silver and with 13 athletes present in the final block over the entire competition, the Judo Federation of Uzbekistan can be satisfied with this grand slam. The victories were often balanced on small details that all the delegations will be keen to settle in the coming weeks.

24 countries finished on the podium and all together 35 were represented in the final block, over the three days.

-90 kg: NAGASAWA Conquers Gold Under the Eyes of Judo Super Stars For three days the host country has been chasing after its gold medal. On the second day, it was very close, but unfortunately Sharofiddin BOLTABOEV failed in the -81kg final against Italian Christian PARLATI. The last chance therefore rested on the shoulders of Davlat BOBONOV, winner of the grand slam in Düsseldorf in 2020 and having achieved a faultless journey through the preliminary rounds he was opposed to NAGASAWA Kenta (JPN), already a winner of two grand slams in his career, in the final. 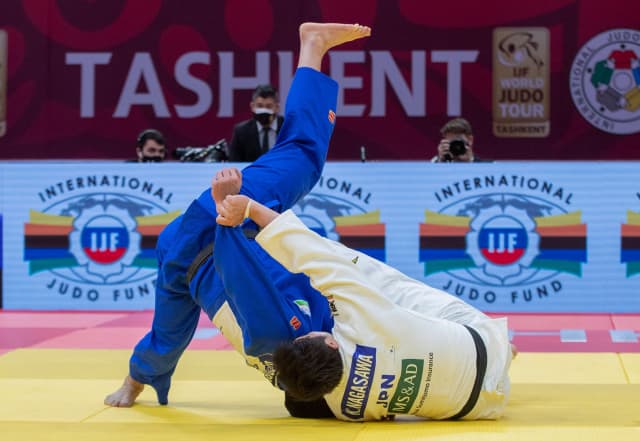 In the opening seconds of the final, encouraged by the shouts of the public, BOBONOV tried to impose his power on NAGASAWA and even made him raise his heels with an attempted hip movement. A first shido was therefore announced against the Japanese judoka. Halfway through the match, once again the public ignited, on a precise left-handed shoulder movement, but this attempt was lacking the extra strength to score. After a final of rare intensity, the two competitors, who were encouraged by their coaches, both Olympic and world champions, Ilias Iliadis for Uzbekistan and Kosei Inoue for Japan, entered golden score, with a now somewhat dull BOBONOV who was also penalised a first and a second time. On the brink of rupture, he launched his last effort into desperate attacks. NAGASAWA got an additional penalty. There was no longer any room for error and it was finally NAGASAWA who scored a liberating waza-ari with a sutemi-waza technique that this time BOBONOV could not avoid. Both athletes bowed respectfully as well as their well known coaches. This was a final just as we like them to be. 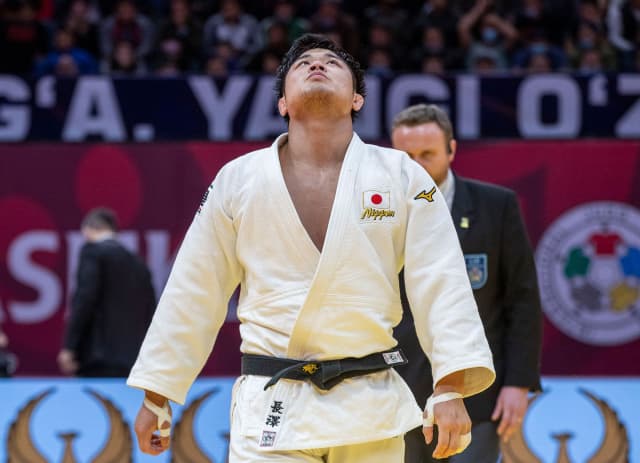 Uzbekistan had a second chance for a medal in the category, in the name of Shermukhammad ANDREEV, who faced Azeri Mammadali MEHDIYEV for the bronze medal. With just a handful of seconds remaining, MEHDIYEV scored a waza-ari with a left-handed tai-otoshi, to win his 8th medal at a grand slam.

The second bronze medal match was contested between two European countries, as Klen Kristofer KALJULAID (EST) and TOTH Krisztian (HUN) met. It was not until the last ten seconds that TOTH got out of the clutches of KALJULAID, whose very high kumi-kata on the back of his opponent and his lateral position, blocked any inclination of the Hungarian to gain the upper hand. A last attack was a little less strong by KALJULAID, allowing TOTH to skilfully dodge and finally score ippon and win a precious medal with the points that accompany it. 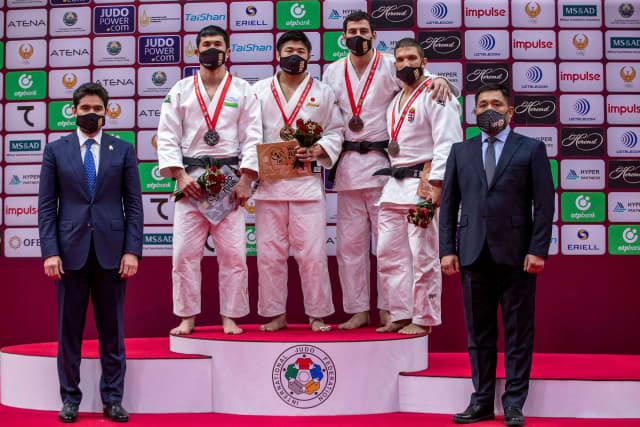 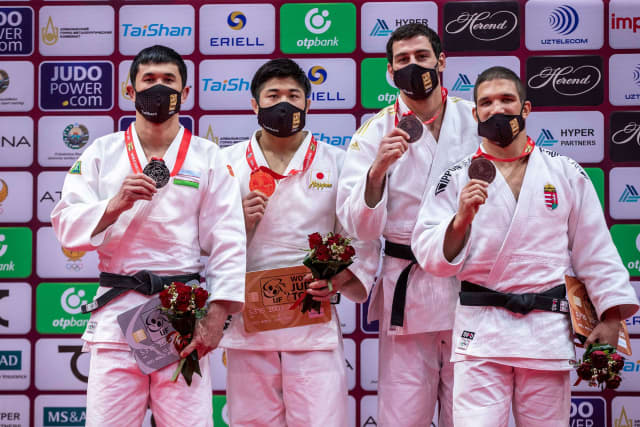 -78 kg: Japan Harvest One More Gold with UMEKI In a category largely dominated by France in recent years, but in the absence of the French representatives, the games were quite open. In a slightly less competitive context, it was therefore the Croatian, Karla PRODAN, cadet world champion in 2015 and the Japanese judoka UMEKI Mami, world champion the same year, but in the senior division, who found the solutions during the elimination phases to thwart all the traps of their competitors. Nothing really surprising to find the two young women at this level of competition, but interesting to see how the less experienced PRODAN would find a way to counter the Japanese domination on the occasion of this grand slam. 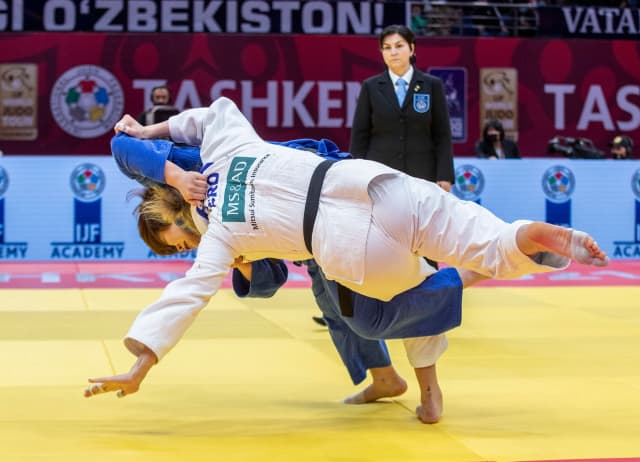 From the first hajime on, PRODAN did not seem impressed by her opponent and began to advance bravely on UMEKI. In a rush, she stepped out of the tatami, collecting a penalty on the way. Gradually, however, UMEKI began to gain the upper hand. After scoring a first waza-ari, she continued with in immobilisation to win her third gold medal in a grand slam. 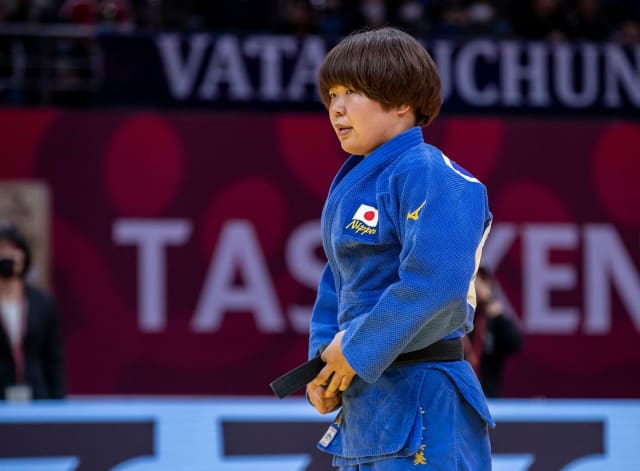 Beata PACUT (POL), third in Tbilisi in 2015 and the first Korean in the category, LEE Jeongyun, competed for a place on the podium. With a superb shoulder movement, LEE Jeongyun won her first bronze medal in a grand slam.

The second Korean in the -78 kg category, YOON Hyunji, had to face Inbar LANIR (ISR), winner of the U23 European Championships last year, to complete the podium. The young Israeli was not impressed and took her chance to win her first major medal on the international stage, after she had scored a waza-ari with an immobilisation and a second one with a counterattack. 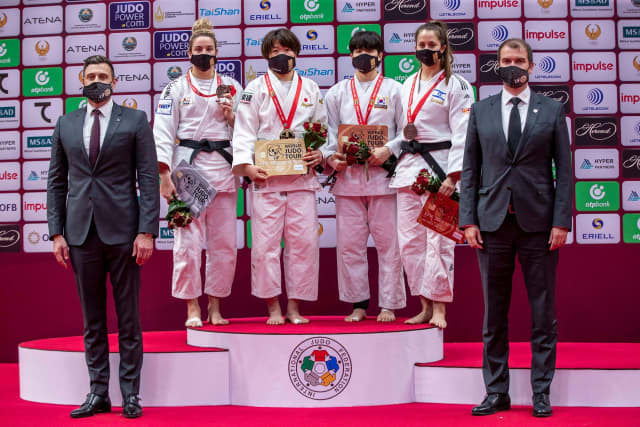 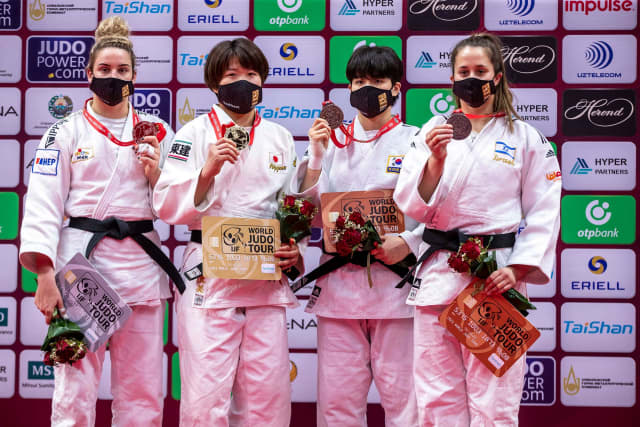 -100 kg: NIKIFOROV: First Time for Grand Slam Gold Muzaffarbek TUROBOYEV was close to joining his teammate from the lower category, BOBONOV, in one of the finals of the grand slam, but unfortunately for him and for his public, he was eliminated by the now experienced Toma NIKIFOROV (BEL) in the semi-final. TUROBOYEV lead quickly with a waza-ari, when he was caught on the floor by the Belgian with an unstoppable shime-waza. NIKIFOROV being in the final, it was Boris GEORGIEV (BUL) who faced him for the gold medal. 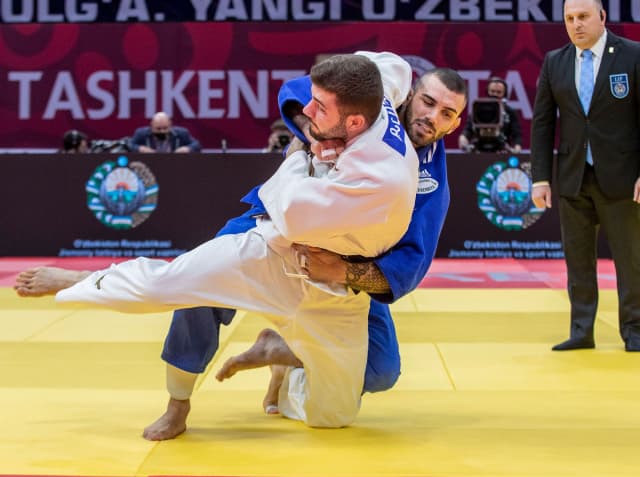 NIKIFOROV was the first to get to the heart of the matter, by scoring an opportunistic waza-ari with a counterattack. Moments later he doubled the lead by scoring from a shoulder movement, allowing him to win his first grand slam gold medal. 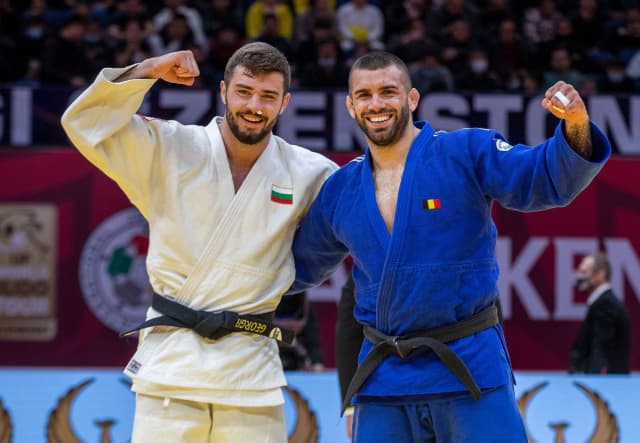 In the first bronze medal contest, LKHAGVASUREN Otgonbaatar (MGL), with bronze medal in Hohhot two years ago, faced Muzaffarbek TUROBOYEV (UZB), who usually competes in the lower category. Fully concentrated, TUROBOYEV left no chance for his opponent and scored two waza-ari, allowing the public to let their joy explode, with this additional medal for the host country.

The second bronze medal contest opposed exactly the same countries, as BATKHUYAG Gonchigsuren (MGL) met Aklmurodbek KHUDOYBERDIEV (UZB). The scenario was different for KHUDOYBERDIEV, who was thrown perfectly on the back by BATKHUYAG with a magnificent o-soto-gari, just as we learn them in the great schools of judo. 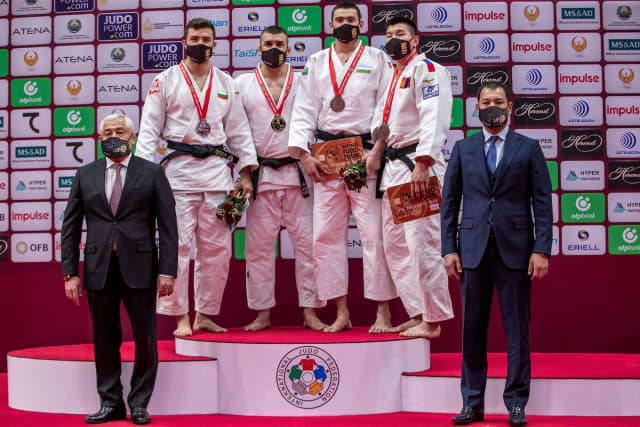 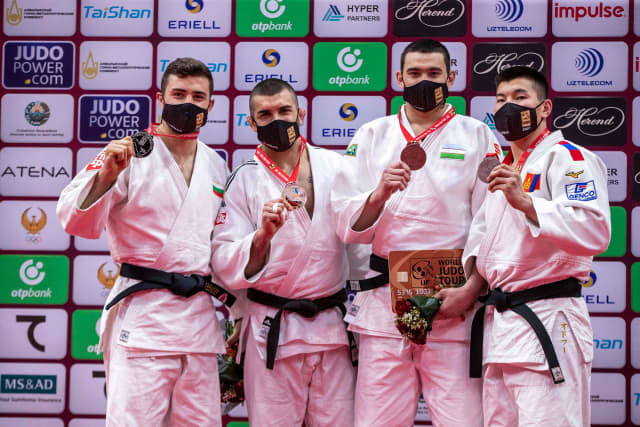 +78 kg: Hierarchy Respected with SONE Wearing Gold It seemed obvious to find the Japanese reigning world champion SONE Akira in the final, as her domination before the global health crisis was impressive. The first athlete who was officially selected by the AJJF for the Olympic team still had to discover how well she had managed during the forced break of the past months. This competition was also to serve as a benchmark in the preparation of SONE, to be ready for the big Olympic rendezvous. She can be reassured, since she won all her preliminary matches by ippon before the end of normal time. In the final she found the Brazilian athlete Beatriz SOUZA, eighth in the World Ranking List. 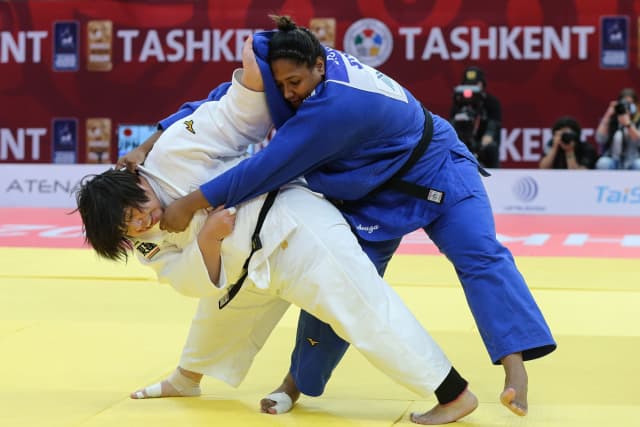 The first minutes of the final came down to a sharing of penalties and while the finalists each had two shido to their name, things started to get serious, because no mistakes were allowed anymore. SOUZA seemed solid on her feet, while SONE launched a few attempts on the left, among others a tai-otoshi and o-uchi-gari. Precise in her positions but sorely lacking in timing, SONE seemed unable to throw, while SOUZA retained a passive attitude earning her a third penalty, offering the victory to the world champion. Obviously the latter is not yet sharpened for the Tokyo Games. She still has work to do and she showed some small weaknesses while moving around the tatami, that could have been sanctioned by a projection, if SOUZA had believed in it. 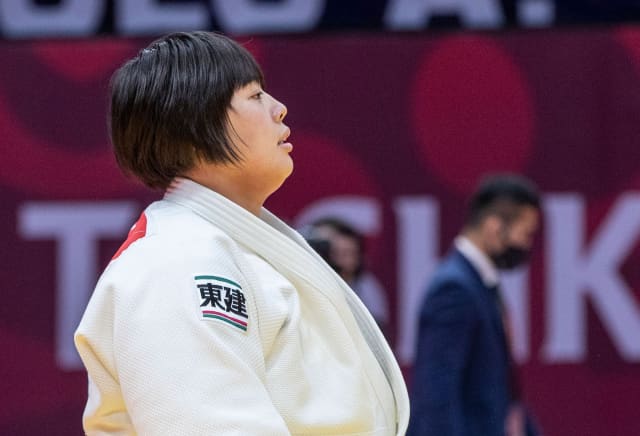 In the first contest for a bronze medal, Yelyzaveta KALANINA (UKR) faced a regular in major international competitions, the Tunisian, Nihel CHEIKH ROUHOU (TUN). In the last minute, the Tunisian took a clear lead with a powerful ura-nage that was very close to ippon. That was enough to win her 9th medal at a grand slam.

To complete the podium, Anzhela GASPARIAN (RUS), seventh in Tel Aviv two weeks ago, took on KIM Hayun (KOR), 5th in the last World Judo Masters in Doha. One minute was enough for KIM to apply a shime-waza technique to win a second medal in a grand slam. 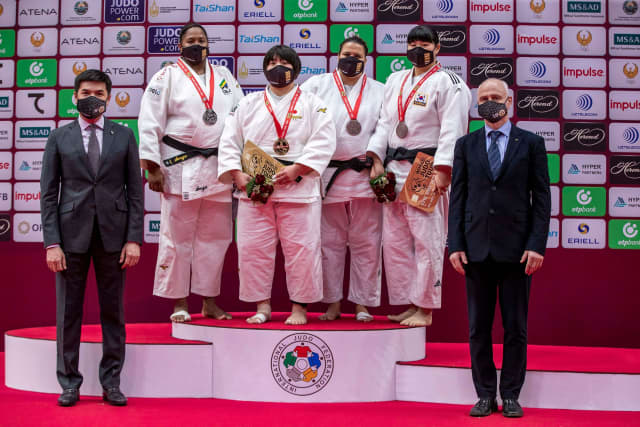 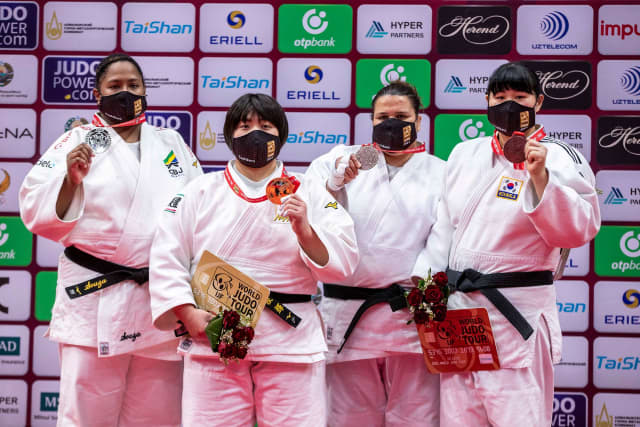 +100 kg: KAGEURA Collects the Ninth Gold of Team Japan The last category of the day was once again dominated by Asian countries, with KIM Sungmin (KOR) and KAGEURA Kokoro (JPN), the man who defeated the King Teddy Riner, on the occasion of the last Paris Grand Slam. 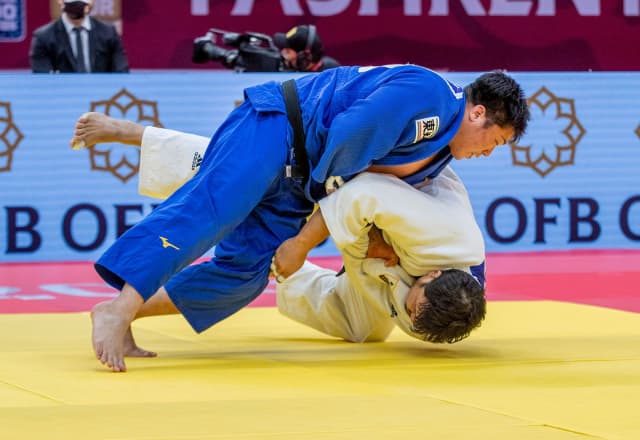 Half way through the final, KAGEURA was already penalised twice as he looked totally dominated by KIM, but that's maybe when the Japanese are so strong. After several unsuccessful attempts KAGEURA launched a last drop-seoi-nage and it scored a waza-ari just before the final gong of the category and of the tournament. 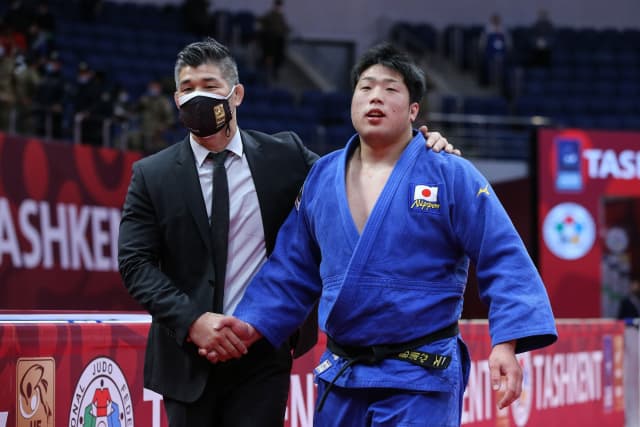 Another KIM of Korea, KIM Minjong, faced Ushangi KOKAURI (AZE) for a place on the podium. KIM was the first in action, scoring a waza-ari with tani-otoshi. The following attack was clearly an ippon, as KIM executed a perfect o-uchi-gari that KOKAURI will remember. This is the seventh medal in a grand slam for the Korean.

The last bronze medal contest of the tournament, saw Temur RAKHIMOV (TJK) and Erik ABRAMOV (GER) competing for a medal and very valuable ranking points. ABRAMOV scored the first waza-ari with a powerful morote-seoi-nage, followed a few seconds later by a counterattack for a second waza-ari and a first medal for him in a grand slam. 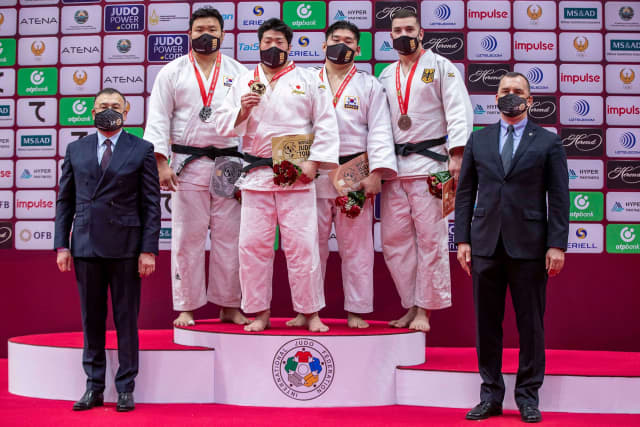 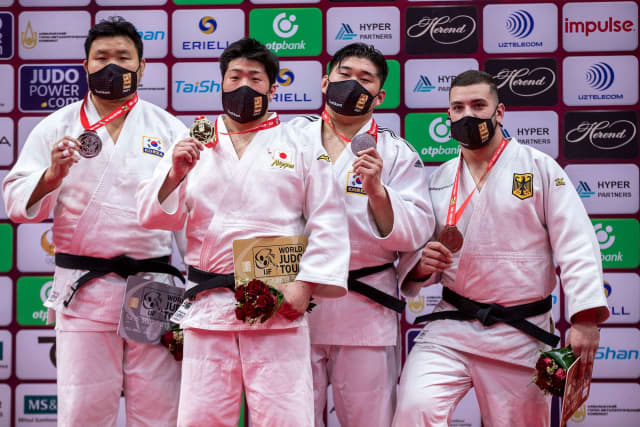