Written by Jakhongir Toshpulatov, Jo Crowley on 14. Oct 2022
Photographs by Victor garcia osado, Tamara Kulumbegashvili
Share
There has been a rousing buzz at the Humo Arena for the last 8 days, led in no small part by Fan Club Uzbekistan, a band of musicians and sports fans who travel all over the country to support sportspeople and events by cheerleading, playing live music and generally filling arenas with happiness.

Fan Club Uzbekistan began as a solo venture in 1993, with Abdurakhmon Fazilov travelling and playing for free for boxing, football, all sports. This has grown, gathering momentum for almost 20 years and Now includes performers who have backgrounds in military orchestras and circus’ and some have been classically trained through music universities.

Often invited by sports federations, the band, which became more organised in 2008 when Abdurakhman decided it would be better with company, has even ventured outside Uzbekistan, including appearing at the Tokyo Olympic Games. 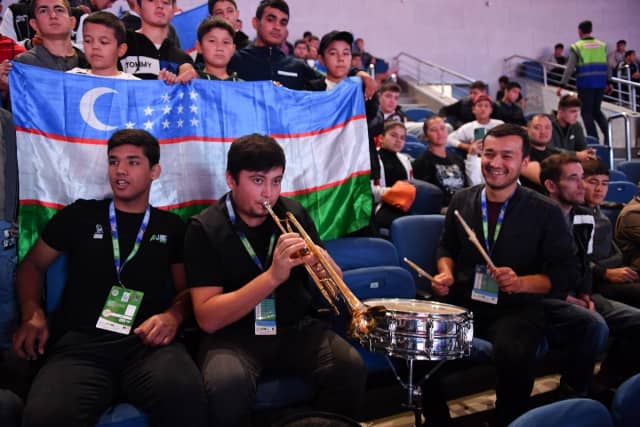 Abdurakhman said, “Adrenaline is a key factor. We feel it too, when supporting my national team. It doesn’t matter if they win or lose. My goal is to make Uzbekistan famous, not only in Uzbekistan.

At this World Judo Championships we have noticed lots of great things. The referees are very professional. Also there are a lot of extra activities like the photo booth and Judo Shop.

Our next trip will just be me and a small group. I will travel on 10th November in my own car from Uzbekistan to Turkmenistan, through many countries, finishing in Qatar for the FIFA worlds. We will wear the national dress of Uzbekistan. We know our team didn’t qualify but we have to be there.” 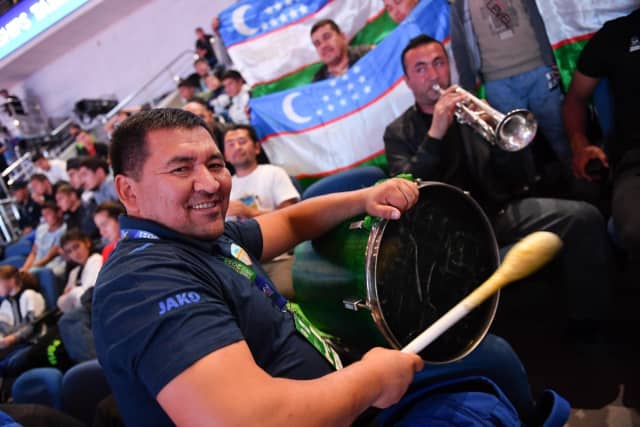 We thank Fan Club Uzbekistan for what they brought to Tashkent. Before Covid we were used to much more celebration in our lives, more fun, more togetherness. Their contribution to this world championships has re-lit the fire for us, bringing atmosphere and energy, creating a real party for everyone.