28. Dec 2022
Share
The International Judo Federation has set as one of its organisational objectives to implement various activities in order to reduce greenhouse gas emissions, thus demonstrating that international sports organisations can contribute to the fight against global warming and climate change and generally contribute to sustainable development goals. Aiming to increase awareness among the global judo community but also through its commitment to decrease its carbon footprint, the IJF has already taken important steps to reduce its climate impact, through several initiatives. 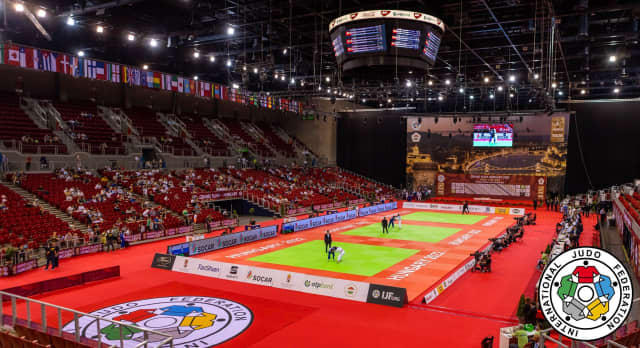 Following the carbon footprint assessment of the Zagreb Grand Prix in 2021, the IJF decided to perform a second event case-study, this time for Grand Slam Hungary, held in Budapest from 8th to 10th of July 2022. Overall, 405 competitors from 61 countries participated in the tournament.

The event organiser, the Hungarian Judo Association, together with the IJF team, implemented a set of measures to increase the sustainability level of the competition, according to the IJF Sustainability Checklist. These measures included providing reusable drinking cups for visitors and ordering the large billboards for the competition venue without the date of the event, so that it may be reused in subsequent years, thus avoiding significant waste.

According to the Greenhouse Gas Protocol, a global standardisation framework for the quantification and management of greenhouse gas emissions (GHG), emission sources related to the event were identified. To collect the necessary data, questionnaires were distributed to hotels, sport venue and to participating athletes and team members, to receive the data about their travel. The cooperation was very good which proves that the majority of participants and contracting organisations recognised the importance of this sustainability initiative.

The study was performed with the support of the Croatian consultancy company EKONERG (Energy Research and Environmental Protection Institute Ltd). The event’s carbon footprint assessment results are presented in Figure 1 below. Overall, the Grand Slam Hungary 2022 carbon footprint amounted to 375 t CO2e[1].

Participant travel to and from Budapest from abroad, by aeroplane, car, buse, van, and train forms, as expected, the biggest share of the event’s GHG emissions.

[1] A carbon footprint is by definition the total greenhouse gas emission caused by an individual, event, organization, service, place or product expressed as (tonnes of) carbon dioxide equivalent. 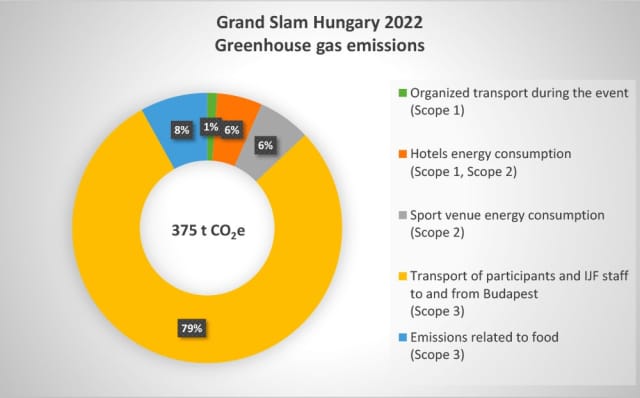 The sustainability project chosen to be supported was the Gunder Hydro Power Project in Antalya, Turkiye. Its carbon offseting credits are certified under the globally recognised VERRA standard. The project generates a substantial GHG emission reduction by bringing carbon neutral electricity production to the Turkish grid. Thus, additionally, an important ‘green link’ has been made between two locations of the IJF World Judo Tour. 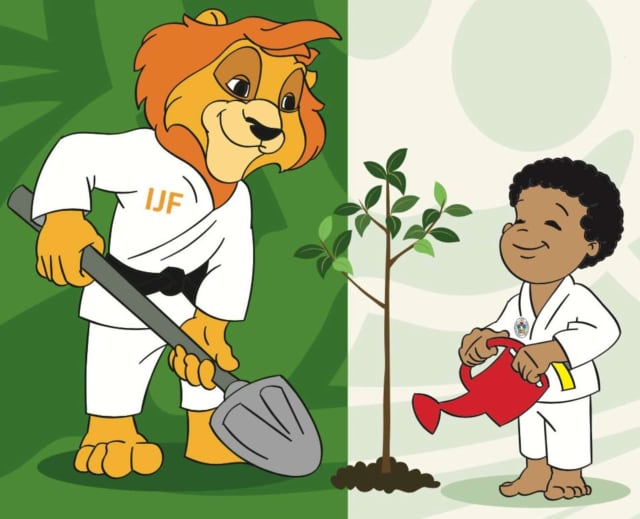 According to the UN’s Sports for Climate Action initiative and general global climate change mitigation principles, offsetting GHG emissions should be taken as the last measure of climate action, only after efforts were made to reduce the carbon footprint of an organisation or an event. With the Grand Slam Hungary 2022 carbon footprint established, after introducing several sustainability initiatives, organisers now have clear insight into the climate impact of all activities related to the event and can focus on reducing GHG emissions even more in the future.

It is clear that initiatives such as the performed assessment of the sport event carbon footprint are a valuable starting point for further climate actions in the future. These initiatives have a broad influence on all people and organisations involved in the event as it raises their awareness regarding the importance of minimising negative environmental impact. As we all know, even a small contribution towards sustainability can be a significant force for good and can help to create a sustainable culture.

The International Judo Federation would like to thank the Hungarian Judo Association for their efforts to protect the environment and implement climate friendly solutions during the organisation of Grand Slam Hungary 2022. We also thank all participants and all members of the judo family for their daily efforts and contribution towards a green future around the judo tatami worldwide!