Written by Nicolas Messner, Jo Crowley, Pedro Lasuen on 26. Mar 2021
Photographs by Marina Mayorova
Share
There is something cathartic about a judo tournament; a sense of elation, as if there is a release expected after several years of conviction. It is comforting to meet judoka who travel, train and fight as if nothing has happened, always faithful to a routine that prioritises perseverance. The mixing of languages is the signal that indicates an international meeting and has a soothing effect when the bell rings and everyone begins to speak in a single language that we call judo.

There is no crowd at the Tbilisi Grand Slam, in keeping with the need to preserve the health of our whole community, but there are, however, three tatami and good judo; the judo we like, offensive and risky. This is Georgia after all!

After one day of competition, Georgia already takes the lead with three finals for one gold medal, but Uzbekistan and Italy are not far behind, with only one silver medal difference, while Mongolia and Kosovo are close too. The results show a great diversity of countries, with 5 countries having already won at least one gold medal. Altogether, 14 countries won a medal on day 1 and 23 were represented in the final block.

-48kg: MUNKHBAT Again in Tbilisi The light categories opened the competition that will end on Sunday, with the enthusiasm of the newcomers and the determination of the old guard. There was particular interest in seeing Urantsetseg MUNKHBAT (MGL). We announced as soon as the official draw was published, that she would be hard to defeat in Tbilisi. Following on from her third place in Doha, during the World Judo Masters and her title in Tashkent two weeks ago, the Mongolian, world champion in 2013 and still very competitive, qualified once again for the final of a World Judo Tour event. This secured her a 39th medal on the circuit, not counting her three world medals. 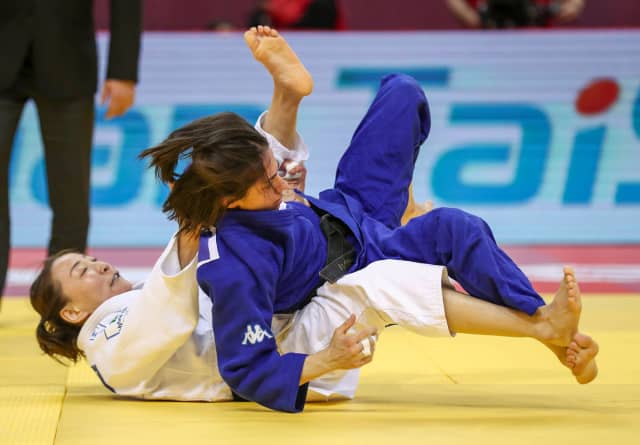 We also expected the confrontation between the two Spaniards, Laura MARTINEZ ABELENDA and Julia FIGUEROA, while they still race towards an Olympic selection. It was Julia FIGUEROA who seemed to gain the upper hand over her compatriot on the other side of the draw, as she qualified for the semi-final, but her road to the podium was suddenly blocked, when she was defeated by the Italian Francesca MILANI (ITA), who was not among the seeds when warming up at the beginning of the day. With no record on the World Judo Tour so far, MILANI can be proud of an amazing competition day.

Without any surprise, MUNKHBAT Urantsetseg won the gold medal. We can not say that Francesca MILANI did not try and she definitely showed courage and determination, but the Mongolian was for sure much stronger than her young opponent and after several attempts on the floor, finally concluded with an immobilisation that was awarded ippon, just one second before the end of the match. 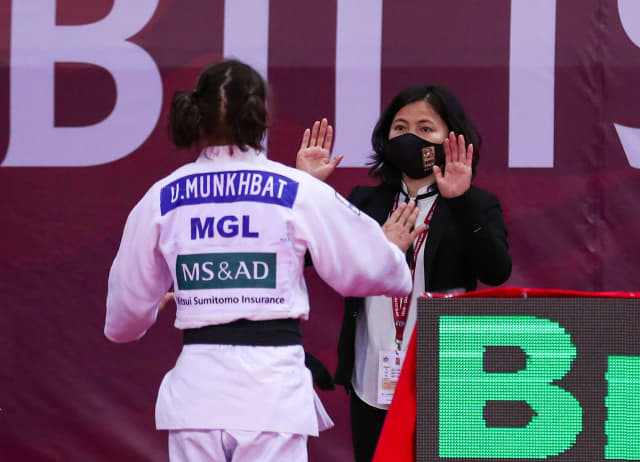 MARTINEZ ABELENDA and FIGUEROA thus eventually met for the bronze medal. Knowing one another perfectly, it took more than 2 minutes and 40 seconds in golden score for FIGUEROA to finally score with a beautiful o-uchi-gari, to reinforce her lead over her teammate for the Olympic qualification.

The second bronze medal contest featured Catarina COSTA (POR), already fifth twice this year (Doha and Tel Aviv) and Marusa STANGAR (SLO), the sister of Anja STANGAR, whom we have been following throughout her triumphant battle against cancer in recent months. After a nice sequence on the floor, Marusa STANGAR scored ippon with an hold down.

We make a small note in addition to the performances of the medallists; 21 year old double junior world medallist Lois PETIT (BEL), made a strong statement, finishing the day just inside the final block. She has no credentials on the World Judo Tour but it is clear that hers is a new name to add to the list of those to watch out for in the future. 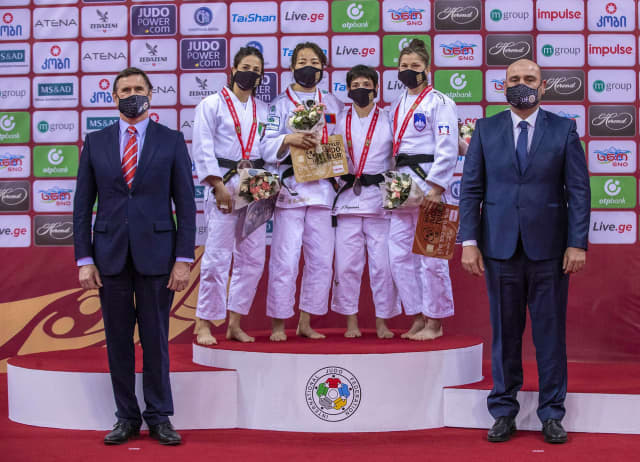 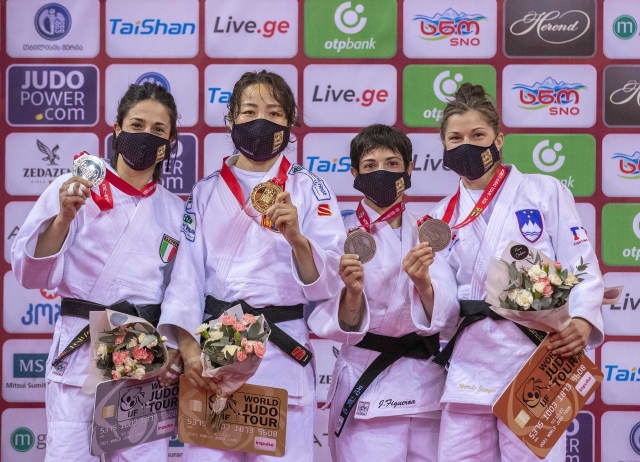 -60kg: Georgia Wins First Gold With NOZADZE As the competition's number one seed, Sharafuddin LUTFILLAEV (UZB) seemed to be the most likely to ignite the powder in Tbilisi, but the 2019 World Championship silver medallist was knocked out in the first round by Shahboz SAIDABUROROV (TJK). It was an Uzbek team-mate who covered the loss, with Lutfillaev’s compatriot Kemran NURILLAEV entering the final, against the first Georgian of the day to shine at home. 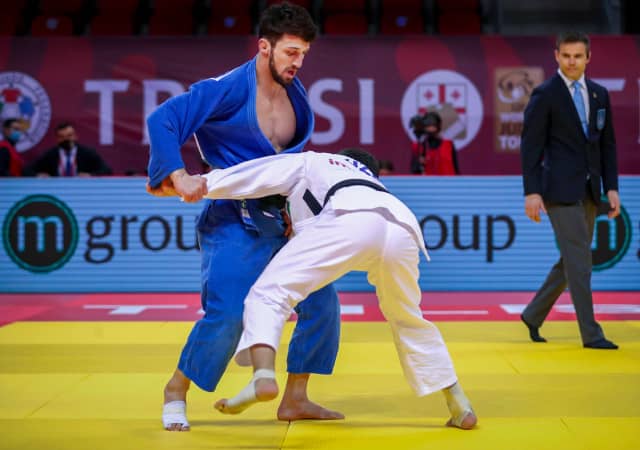 The final started with an incredible rhythm, totally open, but suddenly Kemran NURILLAEV launched a rolling movement, applied directly on the arm of his opponent. If the action looked nice on TV, it was actually a dangerous technique as it stretched the arm of Temur NOZADZE. Thus the Uzbek was logically disqualified, offering the first gold medal to the host country. 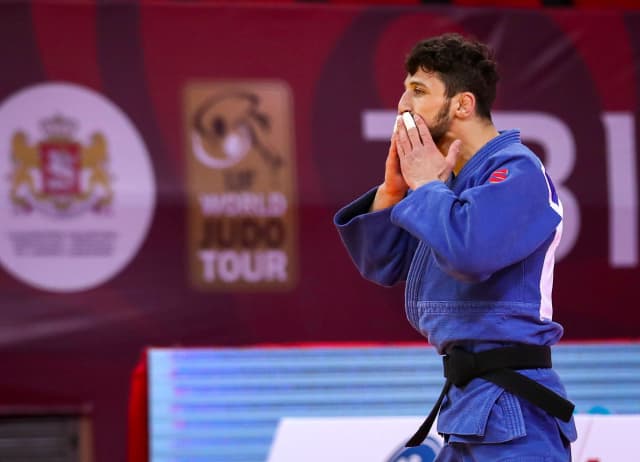 In the first bronze medal contest, Shahboz SAIDABUROROV (TJK), who had a really strong day, was up against the Dutchman Tornike TSJAKADOEA, bronze medallist in Doha earlier this year. It took quite a lot of time for SAIDABUROROV to conclude with a beautiful hip throw for a clear ippon, after almost 4 minutes of golden score.

For the second bronze medal, two young athletes competed: the 2017 world junior silver medallist, Karamat HUSEYNOV (AZE) and the 2019 junior world champion Konstantin SIMEONIDIS (RUS). Due to an injury, SIMEONIDIS could not compete and Karamat HUSEYNOV won the bronze. 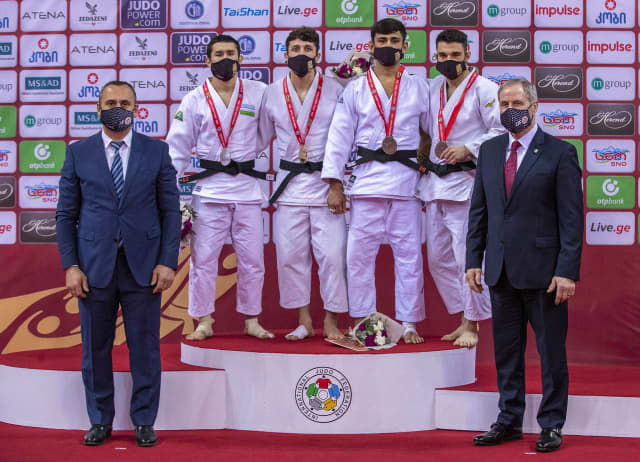 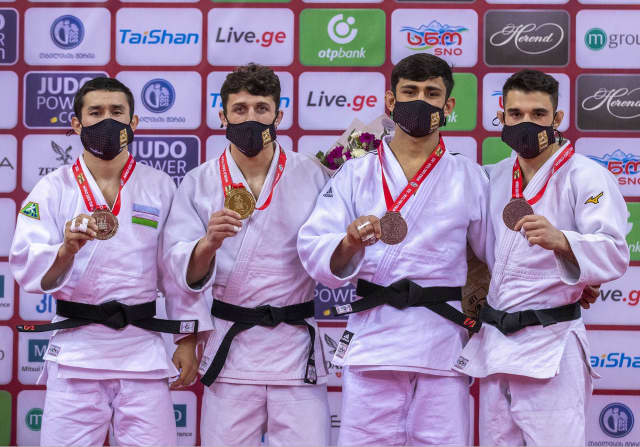 -52kg: GIUFFRIDA Stops GILES For Gold Silver medallist at the last Olympic Games, Italian judoka Odette GIUFFRIDA (ITA), also winner of the 2020 European Championships, perfectly fulfilled her role as the favourite at this Grand Slam. She qualified for the final against the Brit Chelsie GILES, gold medallist in Tel Aviv a few weeks ago, thus demonstrating that her victory in Israel was not taken by chance. 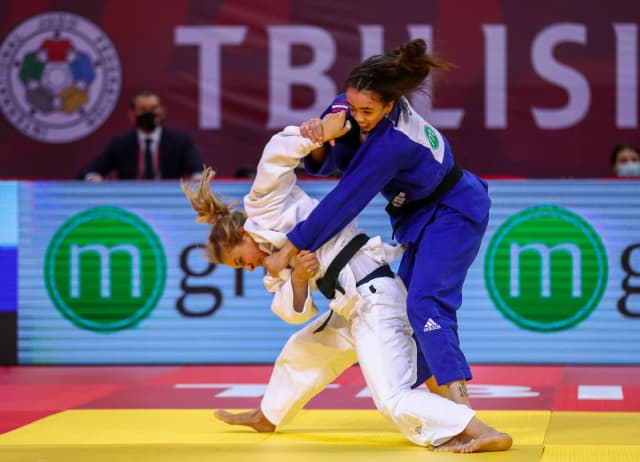 Almost ten minutes were necessary for Odette GIUFFRIDA to stop Chelsie GILES from wining a second grand slam gold medal in a row, but that was close as neither of the two champions were able to find the slightest throwing opportunity, between the failed tai-otoshi attempt of the Italian and the no more successful uchi-mata of GILES. Both GIUFFRIDA and GILES are showing that they are getting ready for the Olympic rendezvous this summer and as the Italian already did it five years ago in Rio, everything is possible. 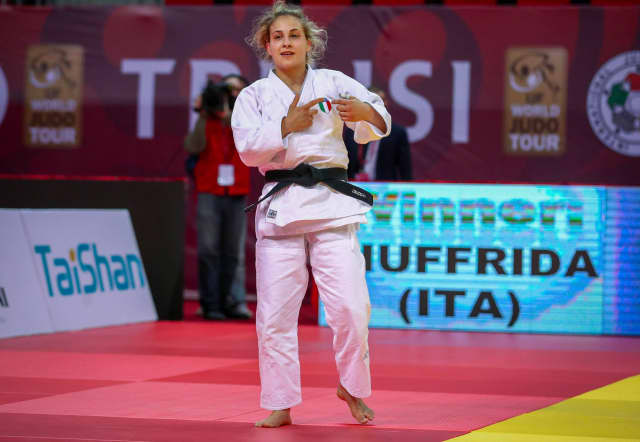 We found Joana RAMOS (POR) in the first bronze medal contest, already three times a grand slam medallist and Larissa PIMENTA (BRA), who failed at the foot of the podium two weeks ago in Tashkent. Using her experience at that level of competition, Joana RAMOS pushed Larissa PIMENTA into golden score, where the Brazilian was penalised for the third time, offering the medal to RAMOS.

For some time now, we have been announcing the rise of the Georgian women's team, on whom we will have to rely more and more in the near future. With the advantage of being at home, Tetiana LEVYTSKA-SHUKVANI (GEO) qualified for the second bronze medal contest, against the Hungarian Reka PUPP. The Hungarian delivered a very good match, scoring two waza-ari to win the medal, with an especially beautiful uchi-mata for the second waza-ari. 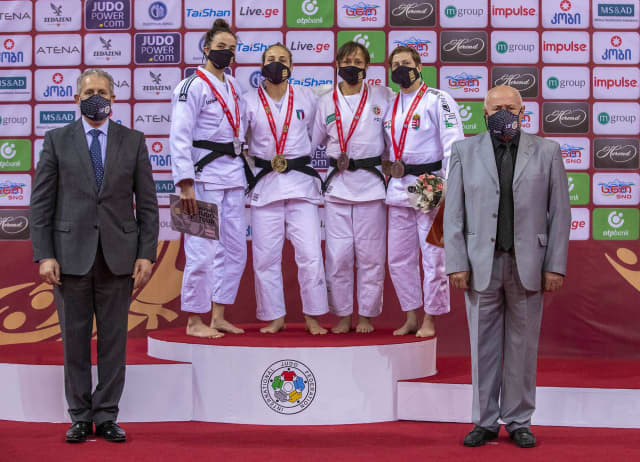 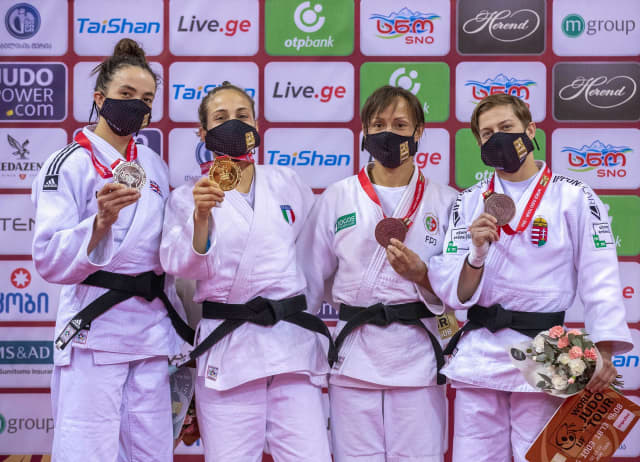 -66kg: NURILLAEV Surprises Everyone In the -66kg category final we again found a Georgian athlete, Vazha MARGVELASHVILI (GEO). This is not really a surprise since the bronze medallist of the last World Judo Masters was seeded number one in the competition. In the final he faced the number 4 seed, Sardor NURILLAEV (UZB), who climbed up one more level after his bronze medal in Tashkent two weeks ago. 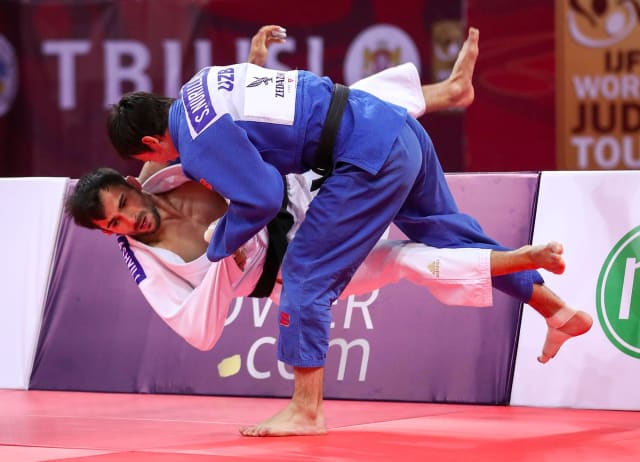 It took only 20 seconds for NURILLAEV to score an impressive ippon, after he had engaged an o-uchi-gari that went outside the fighting area, but in a brilliant change of direction, NURILLAEV transformed the backward momentum into a brilliant uchi-mata. MARGVELASHVILI could look at the referee with astonishment. The ippon was crystal clear and a good example of the fact that you should never relax until the referee actually says mate. 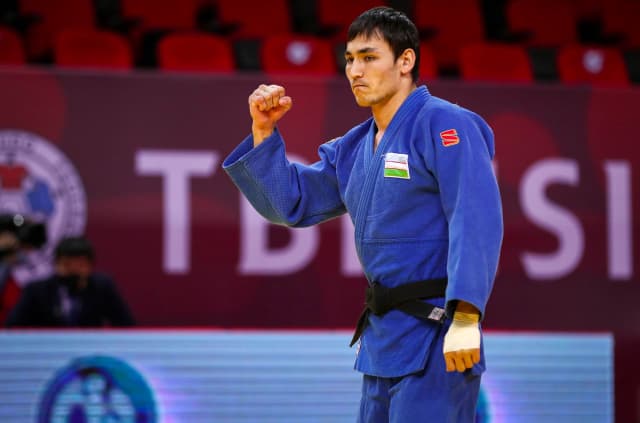 A second local athlete, Bagrati NINIASHVILI (GEO), faced Mongolian Kherlen GANBOLD (MGL), winner of the World Judo Masters in 2017, for a place on the podium, but despite competing at home, NINIASHVILI was not able to stop GANBOLD from throwing for ippon with his special Mongolian wrestling style. It's interesting to see GANBOLD competing, as he is a perfect example of the transition from the traditional Mongolian wrestling, where there are no sleeves to grab, into judo, where he prefers to catch his opponent far down his back; that is very effective.

The 27th place in the world ranking is occupied by Mikhail PULIAEV (RUS) and this is not indicative of the exemplary career of the three-time world silver medallist, already the winner of two grand slams. During this first day of competition in Tbilisi, he was able to add his name once again to the prize list of a world circuit competition. He did this, finally, without having to force his talent too much, since Denis VIERU (MDA) was unable to appear due to an injury he sustained earlier in the day. 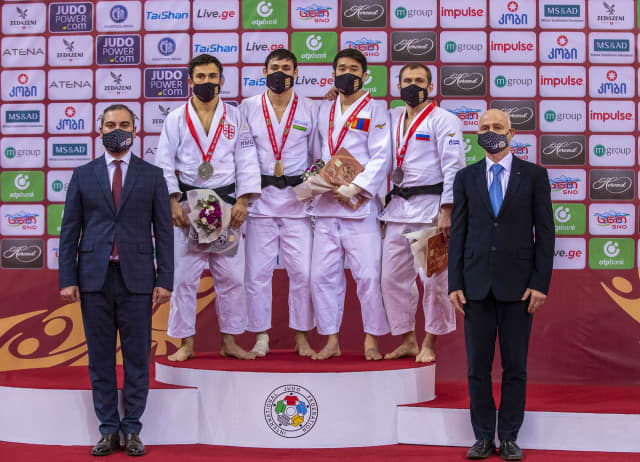 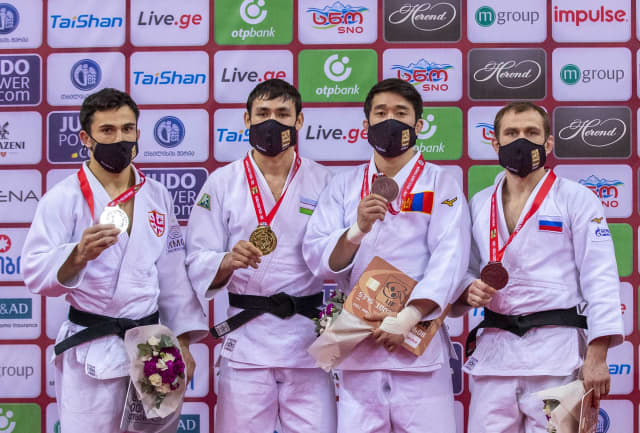 -57kg: GJAKOVA Shows Strength to Win Gold What could be better than a Georgian athlete in the final, to illustrate once again the rise of local female competitors. Eteri LIPARTELIANI is not a complete unknown however, having been junior world champion in 2019. She continues to assert herself on the World Judo Tour and won a beautiful bronze medal in Tel Aviv a few weeks ago. We must also remember that in the semi-final she eliminated the reigning world champion, the Canadian Christa DEGUCHI, who returned to competition at this grand slam. In the final, LIPARTELIANI found Nora GJAKOVA (KOS), another regular on the international circuit. 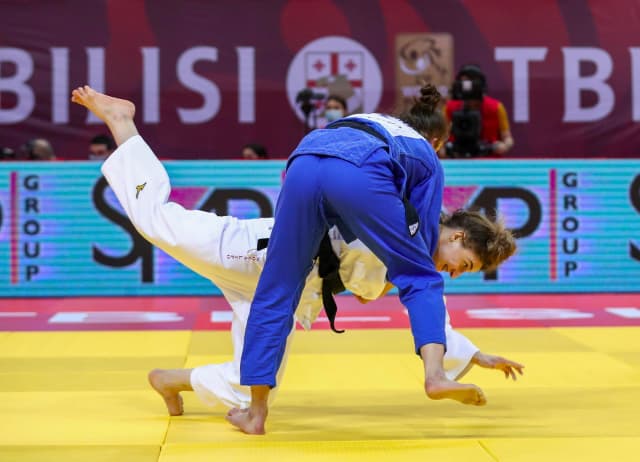 The least we can say is that both women put an incredible amount of energy and power into the final and into controlling the upper part of the body. In that game GJAKOVA was definitely the better player and after scoring a waza-ari, she controlled the rest of the match to win the gold. It is now certain that it is not the last time that we will see LIPARTELIANI at that level of competition. 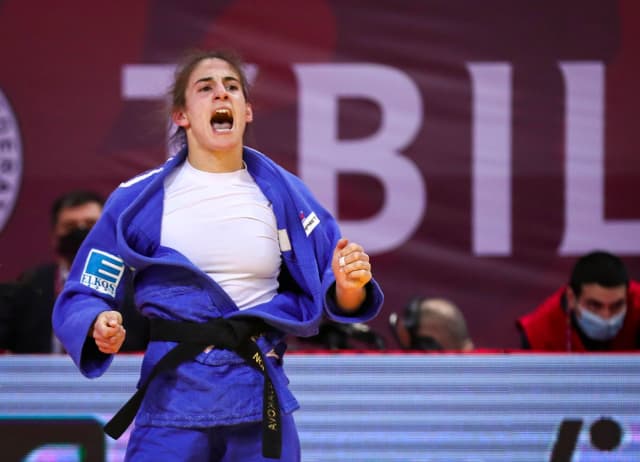 For a place on the podium, Daria MEZHETSKAIA (RUS), gold medallist at the European Games in 2019, met Kaja KAJZER (SLO), whose last international podium was at the Tel Aviv Grand Prix in 2020, which she won. MEZHETSKAIA produced a perfect combination technique, starting with an o-soto-gari and finishing with tani-otoshi for a surgical ippon.

The Serbian, Marica PERISIC, third in Tashkent two weeks ago was to face the current world champion DEGUCHI. It is obvious that the Canadian is far from being on her top form and she is often out of rhythm, just slightly behind and especially during the bronze medal contest, she had to struggle to finally score a waza-ari in golden score. For sure, she knows exactly where she is now, and where she needs to go to reach the top of the podium next summer in Tokyo. 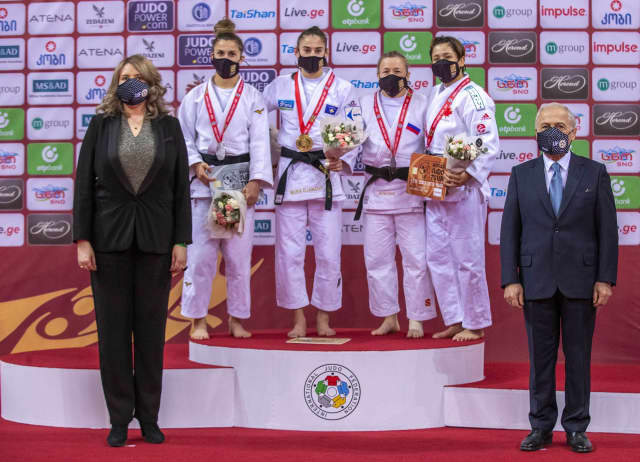 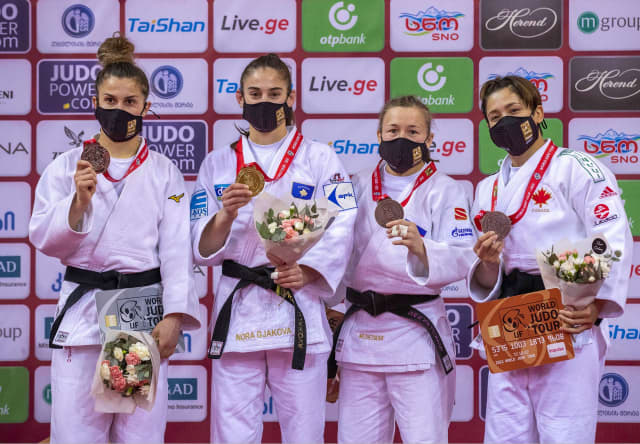