Georgia Ends With a Bang

Written by Nicolas Messner on 28. Mar 2021
Photographs by Marina Mayorova
Share
We had to wait for the very last final to know which nation would finish at the top of the medal table, as the distribution of medals was homogeneous throughout the three days of competition. Three countries actually won two gold medals: Mongolia (third place), Canada (second place) and Georgia (first place), while 22 have medallists and 36 placed athletes in the final block. 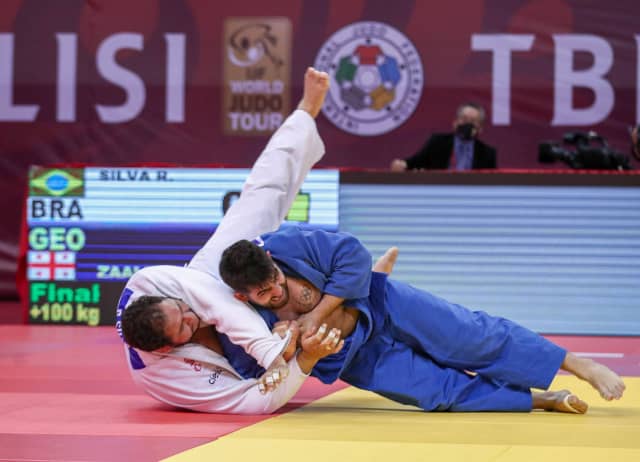 The host country can be satisfied with this result. In a very tough and competitive context, to be among those at the top of the standings was almost guaranteed for Georgia, but the first place was anything but certain.

We will remember from this last day the title for Marcus NYMAN and his ability to conclude on the ground, when there is no standing solution. We will remember the Dutch double at -78kg, the birthday celebrated perfectly for Shady ELNAHAS (CAN), the return in force of China in the +78kg category and finally of course the heavyweight title in the men’s event for the Georgian ZAALISHVILI. 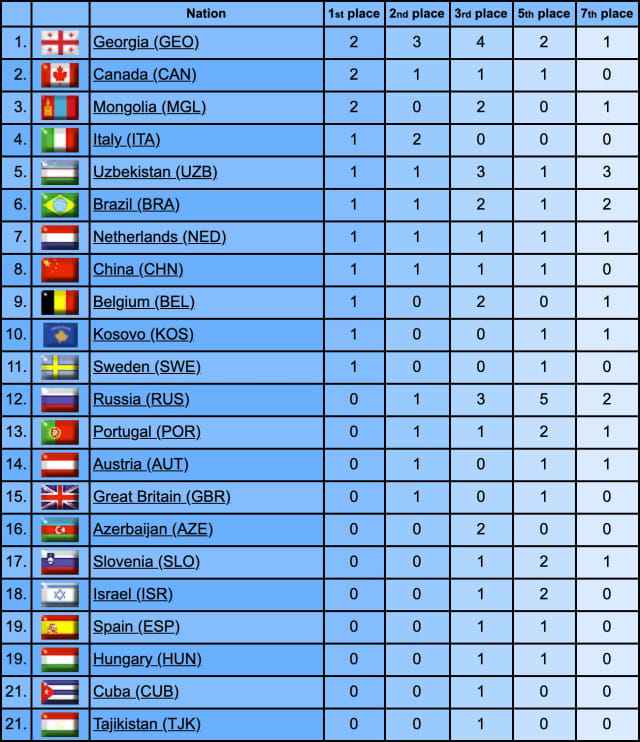 In less than a week the World Judo Tour will stop on the shores of the Mediterranean Sea, in Antalya, for a new grand slam. We will be waiting for you and for new thrills, in order to continue to follow the adventure of the Olympic qualification races.

-90kg: Third Grand Slam Gold for NYMAN in Tbilisi Nicholas MUNGAI was not among the top 4 favourites of the competition yet, not like his female compatriots, Francesca MILANI (Silver medal at -48kg) and Odette GIUFFRIDA (Gold medal at -52kg). He produced solid judo throughout the day, allowing him to reach the final of the -90kg weight category. In front of him, we found a judoka with two grand slam victories in their kit bag, the Swede Marcus NYMAN. 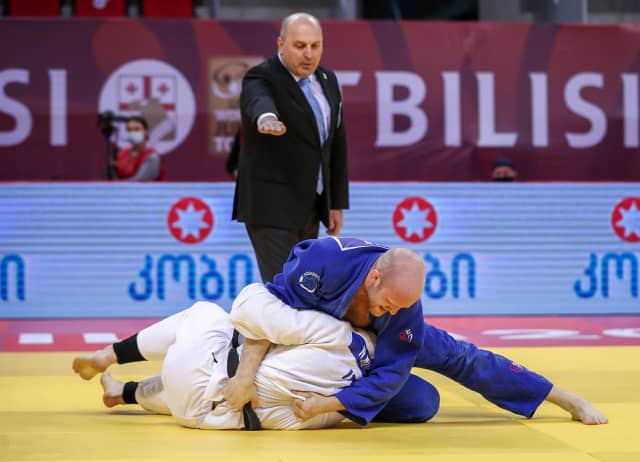 NYMAN is taller than MUNGAI and that obviously disturbed the Italian, who had some difficulties to get close to NYMAN, but what is maybe even more dangerous with the Swede is his skill in ne-waza. Once again NYMAN proved to be very efficient on the floor and after a really good sequence caught MUNGAI with a strong immobilisation for ippon and a third victory in a grand slam.

For the first bronze medal match, Davlat BOBONOV (UZB), second in Tashkent two weeks ago and Li KOCHMAN (ISR), without reference this season, faced each other. KOCHMAN started by attacking  but was penalised twice for kumi-kata infringements, forcing him to take risks and BOBONOV, who looked a little tired, still found the necessary energy to propel KOCHMAN in the rafters of the venue with a majestic ura-nage, for ippon.

The work of Ilias Iliadis, head coach of Uzbekistan, is starting to bear fruit and Uzbek athletes can be found more and more often in the final blocks of World Judo Tour events. This was again the case for the second Uzbek athlete, Shermukhammad JANDREEV, pitted against Mongolian GANTULGA Altanbagana for a place on the podium. During most of the match GANTULGA seemed quite passive, but he was obviously looking for the right moment to apply his preferred technique, uchi-mata and he did it perfectly, with superb execution and perfect control of the sleeve to score ippon. 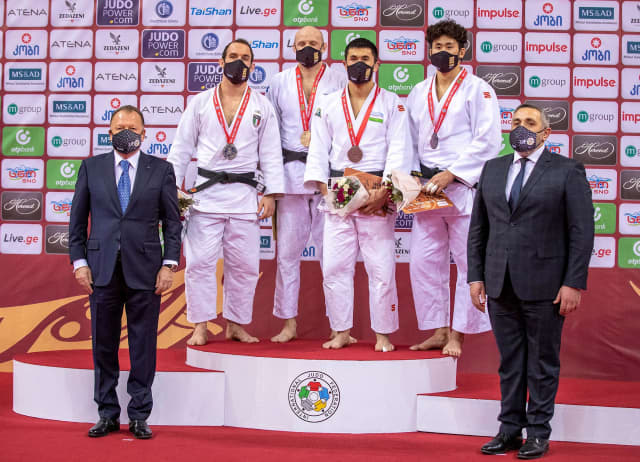 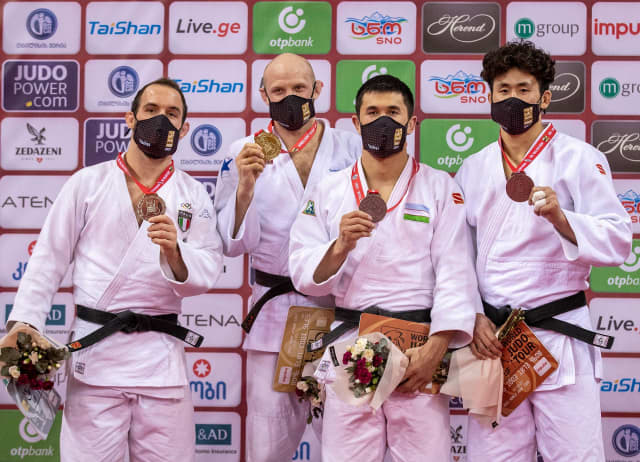 In the absence of the best in the world, the official draw of the category made it possible for some surprises. The Dutch judoka Natascha AUSMA and Karen STEVENSON understood this perfectly and exploited every opportunity to meet in the final. 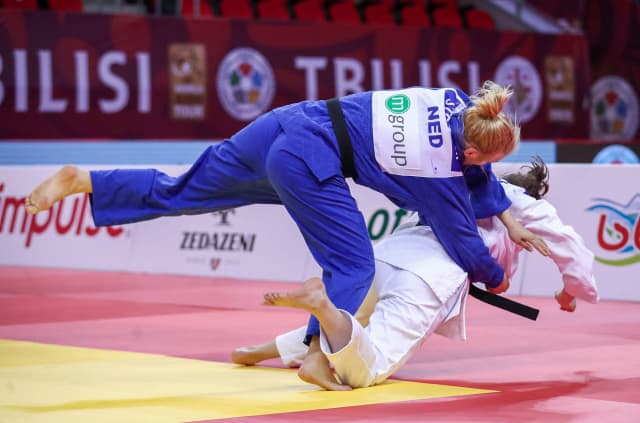 As this is usually the case when two athletes from the same country meet in the final block, none of them were really able to take advantage of the other, until a sequence on the floor that looked like any other, but there was a slight difference that offered a chance to AUSMA to apply a shime-waza, that she didn't let go of. Ippon for AUSMA! 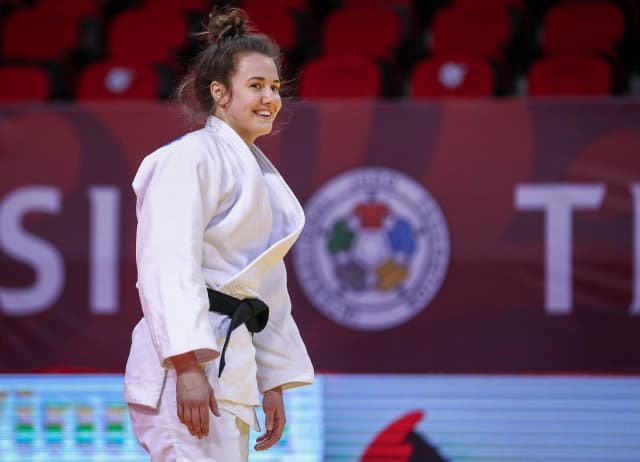 Bernadette GRAF (AUT), second in Tel Aviv in 2020, without any doubt hoped for a final, but had to settle for the bronze medal match against Inbar LANIR (ISR), third in Tashkent recently. Unfortunately for the Austrian it took only 9 seconds for LANIR to score ippon with a massive ura-nage.

The Chinese women's team is particularly well known for its ability to be present at major world events and the world and Olympic titles won by the Chinese competitors are countless. As these great events loom on the horizon, we begin to see the reappearance of Chinese female competitors in the placings. Should we see this as a sign? We will find out soon. In the meantime, MA Zhenzhao (CHN) found herself in a position to win bronze against Russian Aleksandra BABINTSEVA and that is actually what she did. Totally dominated by the strong grip of BABINTSEVA, MA resisted until the golden score period, where she exploited a mistake from the Russian to score with a counterattack for ippon. 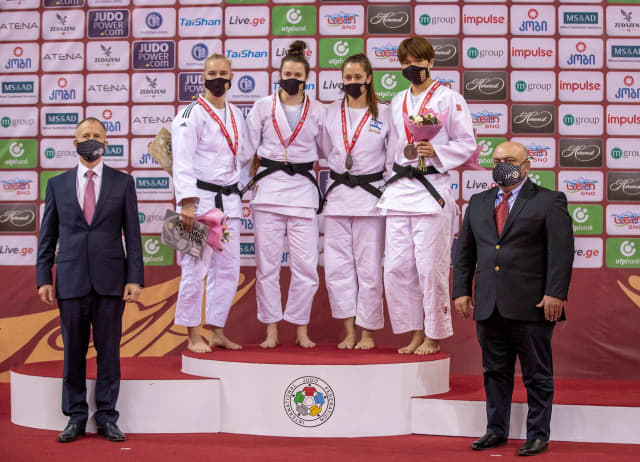 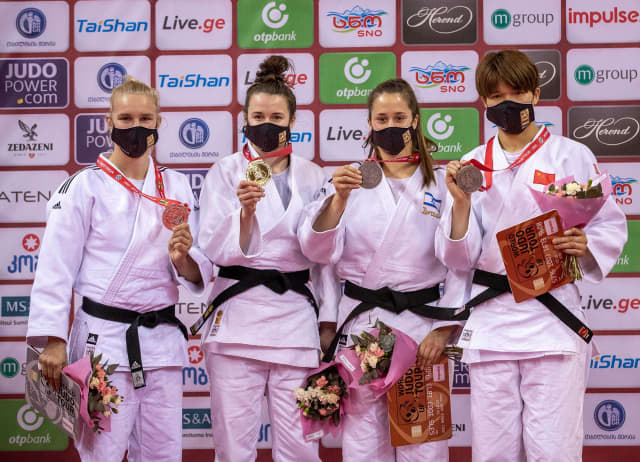 Following in the footsteps of his teammates, who already collected three medals during the first two days, Shady ELNAHAS, who celebrated his birthday yesterday, entered the final of the -100kg category. In front of him was not the best know Georgian competitor, but Ilia SULAMANIDZE (GEO) didn't care and produced his best judo to eliminate current world champion, Jorge FONSECA (POR), who we mentioned a few days ago, as someone who could win or lose at any time, before the final stages. 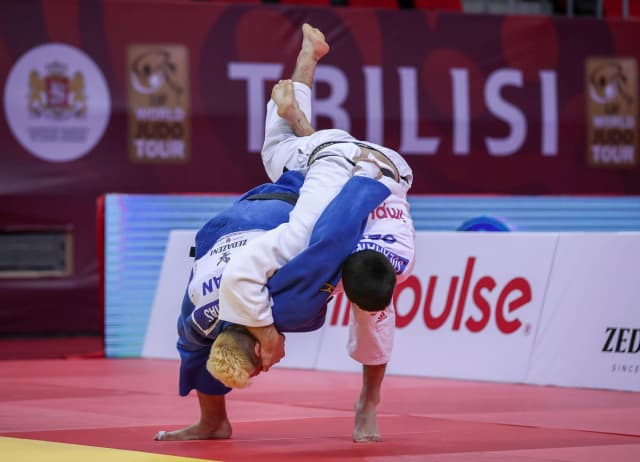 The final was a beautiful opposition of style with SULAMANIDZE producing Georgian style judo, based on close contact and counterattacks, while ELNAHAS was producing some more traditional attacks. It is with one of those attacks that the Canadian scored a waza-ari with a long distance ko-uchi-gari. It was a nice way to conclude his birthday weekend. 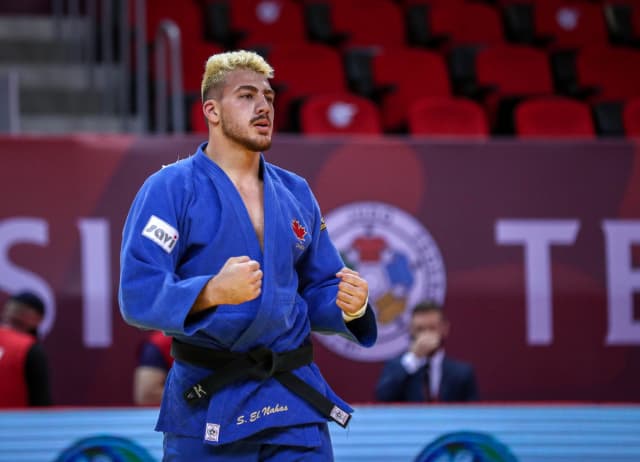 The first bronze medal contest saw the winner of the 2017 Abu Dhabi Grand Slam, Niiaz BILALOV (RUS) and Muzaffarbek TUROBOYEV (UZB), bronze medallist in Tashkent two weeks ago facing each other. Once again the Uzbek rose to the podium after launching zillions of attacks in regular time and in golden score. Only one was actually necessary and had the required control to score a waza-ari with a soto-maki-komi.

Toma NIKIFOROV (BEL) who won in Tashkent for his comeback, this time had to be happy with a possible bronze. He faced Joakim DVARBY (SWE) for a spot on the podium. The least we can say is that DVARBY tried and he tried hard to throw NIKIFOROV with brillant yoko-tomoe-nage entries or massive shoulder movements but maybe a little too deep under the centre of gravity of the Belgian, so that DVARBY couldn't finish the move. Toma NIKIFOROV used one single mistake of DVARBY to throw him with a low ura-nage for waza-ari. Tired but happy, NIKIFOROV left at the end with a new medal around his neck. 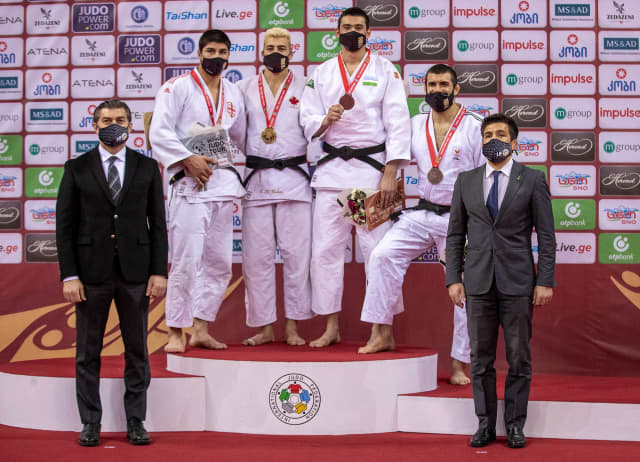 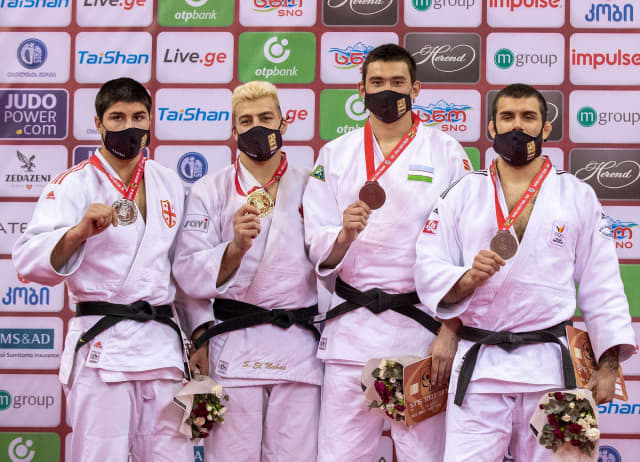 +78kg: China with XU is Back in Women's Heavy Weight

China has a tradition of women's heavy weight champions. With only one grand prix medal to her name so far, XU Shiyan is maybe the next champion, as she entered the final to face the Portuguese athlete Rochele NUNES (POR). 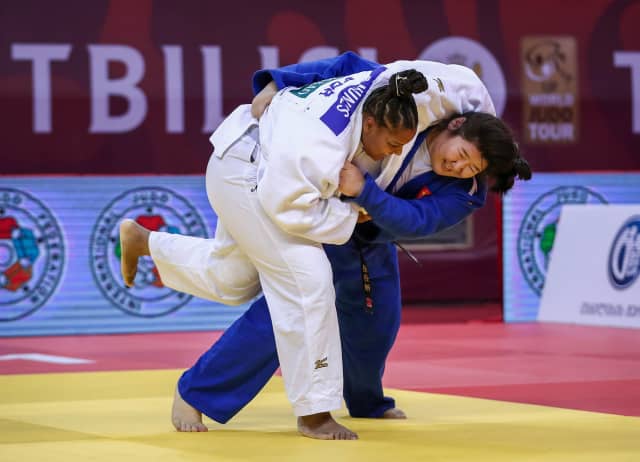 As soon as the final started, XU took the lead and seemed to have full control over the match. She even scored a waza-ari, but that's when she changed her tactics and gave hope to NUNES to come back into the match, but XU again took advantage of a situation on the floor to pin down her opponent for ippon. 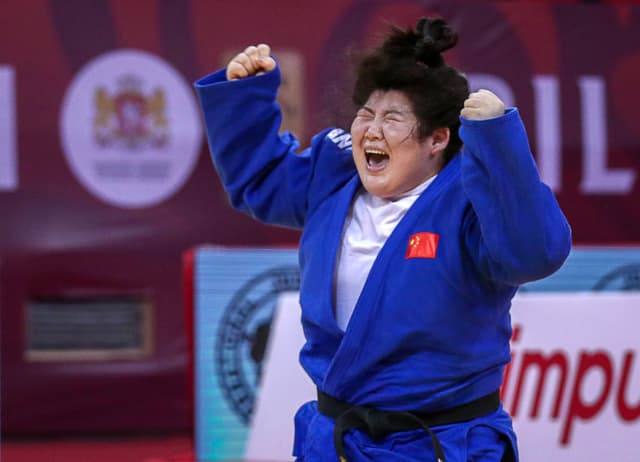 The first bronze medal contest saw Raz HERSHKO (ISR) and the first Brazilian Beatriz SOUZA compete for a medal. Raz HERSHKO tried to move around Beatriz SOUZA, but the difference of power was too big between the two competitors, for HERSHKO to put her opponent in danger. Eventually SOUZA launched a powerful o-soto-gari to leave no chance to escape for the Israeli.

The second Brazilian, Maria Suelen ALTHEMAN qualified for the second bronze medal contest against the second Chinese judoka, who was penalised three times to give the victory to the Brazilian for a 17th grand slam medal. 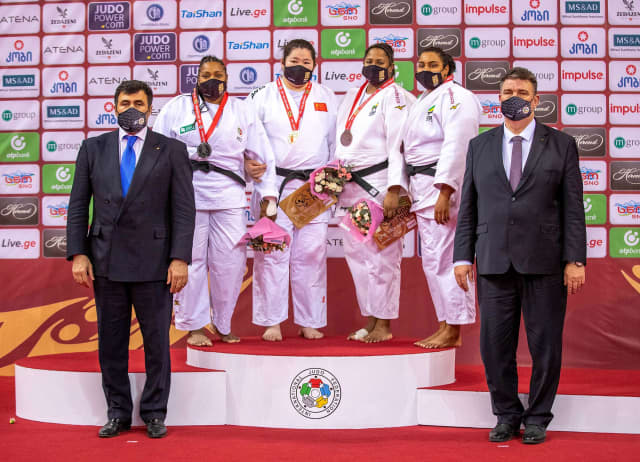 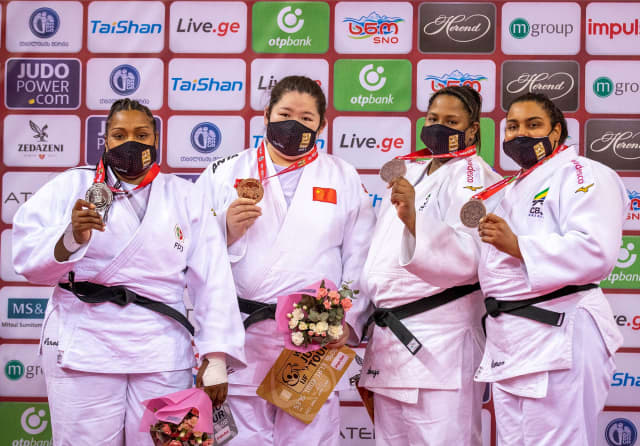 Olympic and world medallist Rafael Silva had a good opportunity to collect precious points for the Olympic qualification and he didn't let his chance get away. In the absence of former world champion, Guram Tushishvili, Georgia still had a good chance to be on the podium too and this chance had a name: Gela ZAALISHVILI. He faced the Brazilian giant for gold. 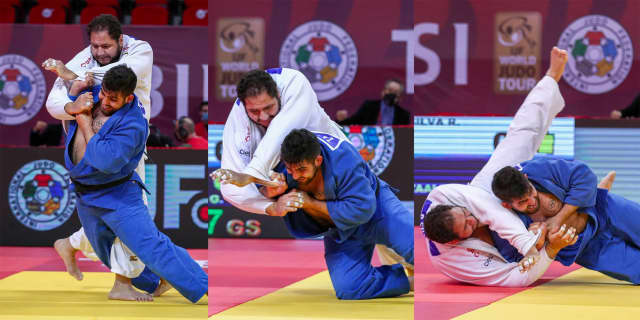 It is not often that it happens, that someone is capable of throwing Rafael SILVA with a massive ippon like ZAALISHVILI did in this final. After regular time, where both athletes neutralised the other, the Georgian gave the impression that he was preparing something and he actually was. With a huge sode o-soto combination, he made SILVA lose balance and roll on his back. This concludes a beautiful competition day for ZAALISHVILI and for the host country. 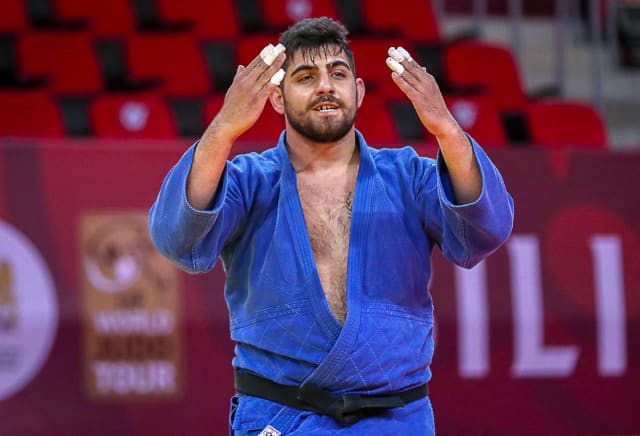 A second Georgian competitor was present in the final block, Saba INANEISHVILI, who was up against Cemal ERDOGAN (TUR) for the bronze medal. After a little less than 1 minute, the 19 year old Georgian counterattacked ERDOGAN for ippon and a first medal in a grand slam.

The last bronze medal contest comprised Maciej SARNACKI (POL) and Andy GRANDA (CUB). Just after half of the match was past, both athletes had a waza-ari next to their name, when Andy GRANDA scored a beautiful ippon, from a situation that could have gone in either direction, to win the bronze medal. 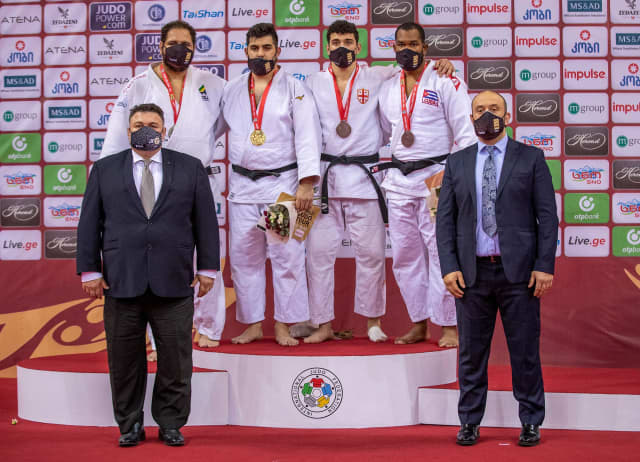 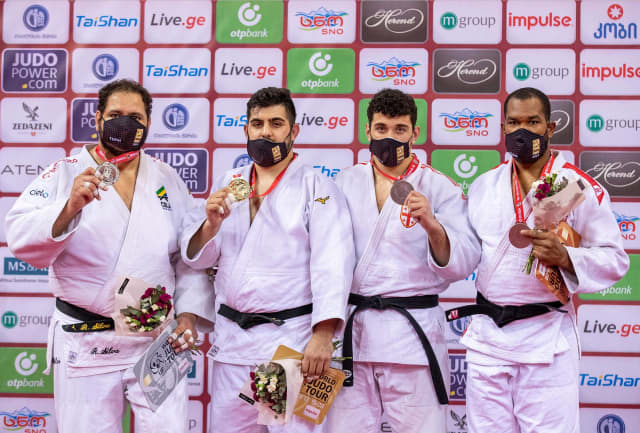