Written by Mark Pickering, Nicolas Messner, Pedro Lasuen on 11. Feb 2018
Share
The second day of judo at the Paris Grand Slam concluded with the seven last weight categories. Find below the results and report about each category.

-70kg: Britain’s CONWAY stops world champion ARAI from retaining Paris title
Olympic bronze medallist Sally CONWAY (GBR) recorded one of the finest wins of her career with a riveting performance as the tenacious Briton battled past world champion ARAI Chizuru (JPN) in the final. CONWAY, who won bronze in Paris in 2016, stopped ARAI from retaining her Paris title by escaping from an uchi-mata attempt and trapping the Japanese in a hold down for 20 seconds and ippon. 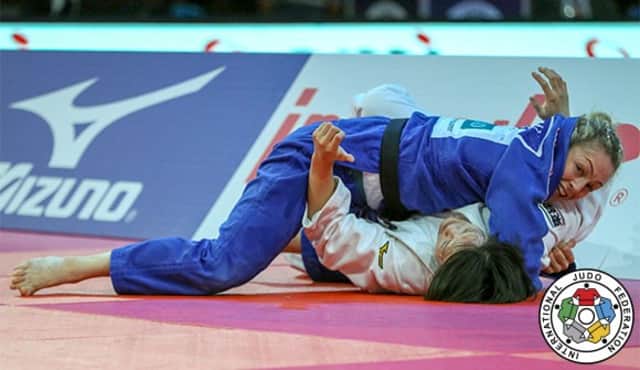 In the first semi-final ARAI bested three-time Grand Slam winner Kim POLLING (NED) by a waza-ari score after containing her Dutch rival for three minutes and then controlling the final 60 seconds.

In the second semi-final World Judo Masters bronze medallist Marie Eve GAHIE (FRA) was held down by CONWAY who has a tendency for beating top draw French competitors on the biggest stages in the sport.

The first bronze medal was won by GAHIE who defeated The Hague Grand Prix silver medallist Sanne VAN DIJKE (NED) by ippon to add to the hosts’ medal haul.

The second bronze medal contest featured POLLING and African Championships winner Assmaa NIANG (MAR) and it was the European judoka who came out victorious by registering two scores without reply. POLLING won her ninth Grand Slam medal by ippon to extend her medal-winning run to four consecutive competitions. 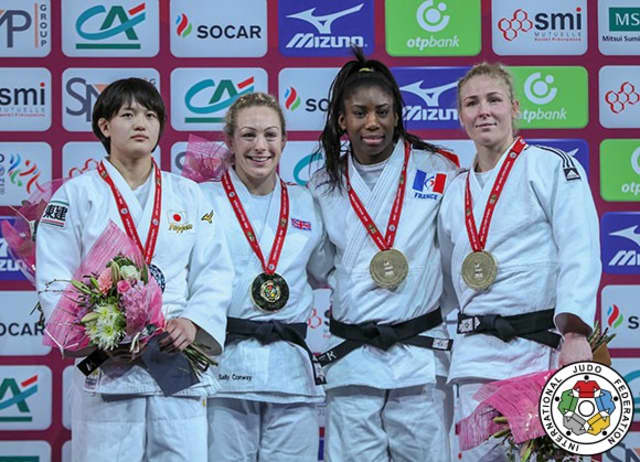 -78kg: France’s TCHEUMEO laps up a superstar ovation after Paris Grand Slam title number four
Double Olympic medallist Audrey TCHEUMEO (FRA) won her country’s second gold medal at the first major of the season with victory over world number one Guusje STEENHUIS (NED) in the -78kg final. Defending champion TCHEUMEO, who won the world title here in 2011, looked dangerous from the opening exchange but could only break the resistance of her opponent in golden score. The charismatic French champion has lethal ashi-waza and tapped the legs of STEENHUIS who surprisingly folded and fell onto her back for ippon. STEENHUIS gingerly returned to her feet while TCHEUMEO shared a warm embrace with her familiar foe before dancing her way out of the field of play. 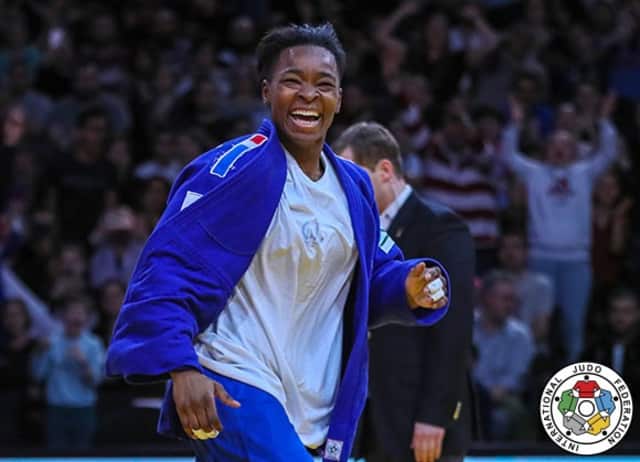 In the first semi-final STEENHUIS edged past World Judo Masters silver medallist MALONGA Madeleine (FRA) by a waza-ari score which was the only time that the scoreboard was called upon.

In the second semi-final Tokyo Grand Slam winner HAMADA Shori (JPN) was driven to the tatami by TCHEUMEO for ippon with a thumping osoto-gari with 86 seconds left.

The first bronze medal was claimed by HAMADA who thwarted teammate and former world champion UMEKI Mami (JPN) by ippon in a result which will certainly have consequences in terms of future international selections for the hosts of the next Olympics are required to qualify any judoka for Tokyo 2020.

Audrey Tcheumeo helps Guusje STEENHUIS to climb on the podium 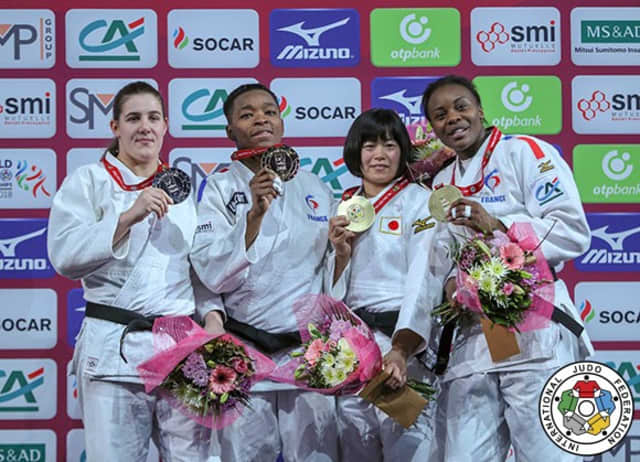 +78kg: KIM Secures her World Number One Position
The final of the day in women’s +78 opposed world number one and top seed athlete KIM Minjeong (KOR) and the new Chinese heavyweight WANG Yan (CHN). After 25 seconds both athletes were penalized with a first shido for passivity. Thirty seconds later they were again penalized with a shido. Under the threat of a disqualification, KIM and WANG stared to be more active, but not enough to score, so they had to enter the golden score. After one minute and ten seconds, finally the Chinese was penalized for the third time for a cross grip and disqualified offering the victory to KIM. 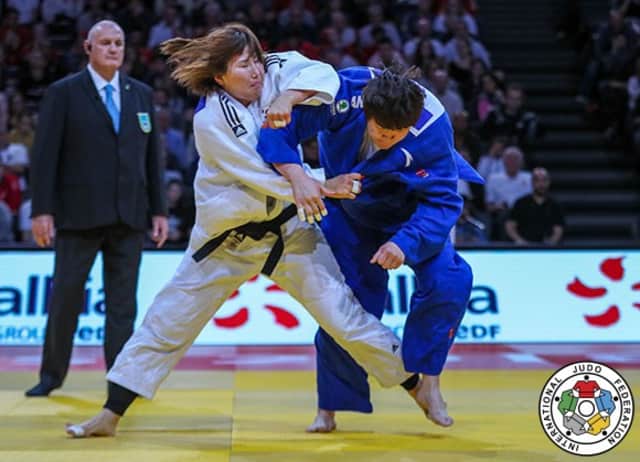 Veteran Eva BISSENI (FRA) could nothing against Iryna KINDZERSKA (AZE) and was immobilized for ippon in the second bronze medal contest.

World number one KIM Minjeong (KOR) captured the World Judo Masters title in December to rule the rankings for the first time in her career. KIM clinched bronze in Paris last year and was in contention this year while world bronze medallist Iryna KINDZERSKA (AZE) has flourished in the Azerbaijan regime having switched from representing Ukraine in 2017. World number nine KINDZERSKA took silver at the Abu Dhabi Grand Slam and competed for the first time this year in Paris. Junior world champion SONE Akira (JPN) is a two-time Grand Slam silver medallist at 17 years old and competed at a Grand Slam on international soil for the first time on Sunday.

In the first semi-final 37-year-old former GB World Cup silver medallist Eva BISSENI (FRA) lost out to KIM after 90 seconds of golden score as the visiting judoka caught the home judoka with a ouchi-gari for a waza-ari.

In the second semi-final WANG threw Junior world champion SONE Akira (JPN) for a waza-ari and held down her teenage opponent for a second and match-winning waza-ari. 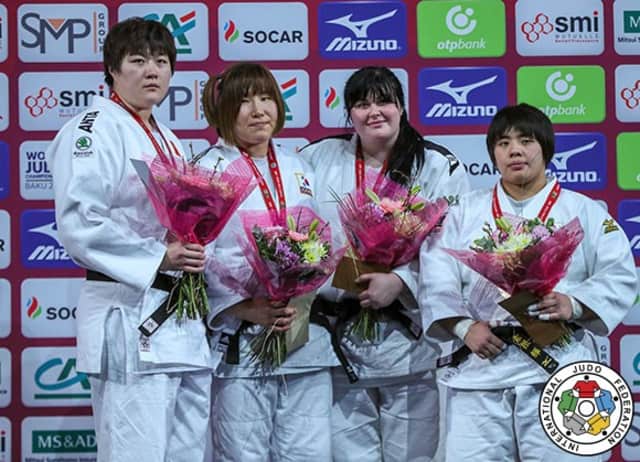 MEN
-81kg: Japanese teenager wins his first Grand Slam title
Asian Championships winner FUJIWARA Sotaro (JPN) struck in the -81kg category as the 19-year-old won his first major honour on the IJF World Judo Tour in only his second Grand Slam appearance and first outside of Japan. While his opponent, world number 57 LEE, was the aggressor from the outset the Japanese newcomer settled into his rhythm and threw with a left-sided uchi-mata for ippon. 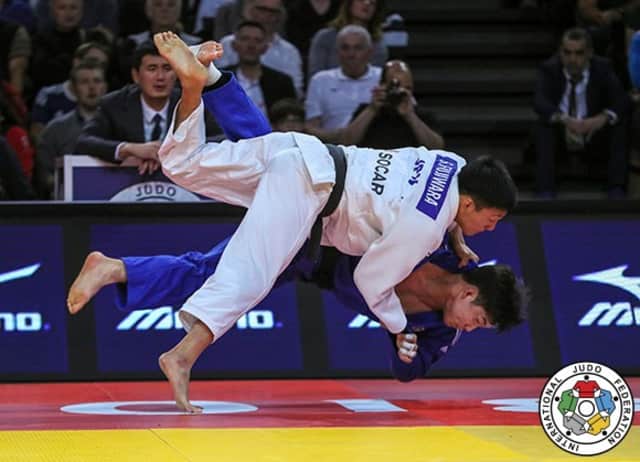 The first bronze medal was clinched by 2017 Paris Grand Slam winner Frank DE WIT (NED) who achieved back-to-back podiums in the French capital by throwing MUSIL with an osoto-gari for ippon with only six seconds left on the clock.

The second bronze medal was won by former European bronze medallist Nugzari TATALASHVILI (GEO) who shaded VALOIS-FORTIER by a waza-ari in golden score to earn his result in his new category sicne moving up from -73kg in 2017. 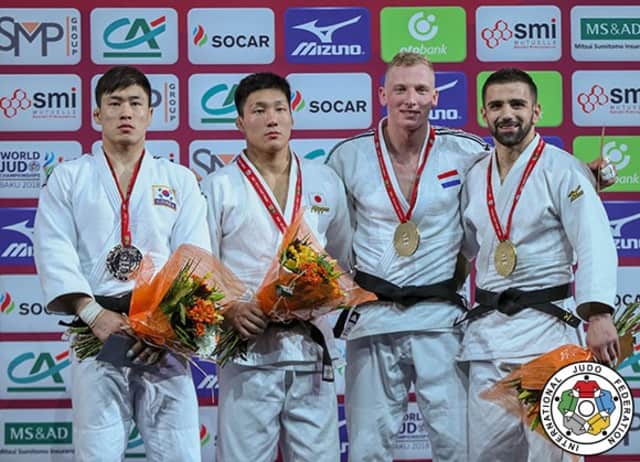 -90kg: Dream debut in Paris for Japanese tyro MUKAI
Tokyo Grand Slam bronze medallist MUKAI Shoichiro (JPN) won a sensational gold medal on his first IJF World Judo Tour competition on international soil with an irresistible showing. MUKAI, 22, needed only 15 seconds to defeat double and reigning World Judo Masters winner Beka GVINIASHVILI (GEO) as the Rio 2016 Olympian, who is the same age but vastly more experienced at the top level, with his ippon seoi-nage steering the Japanese flag to the rafters once again in the AccorHotels Arena. 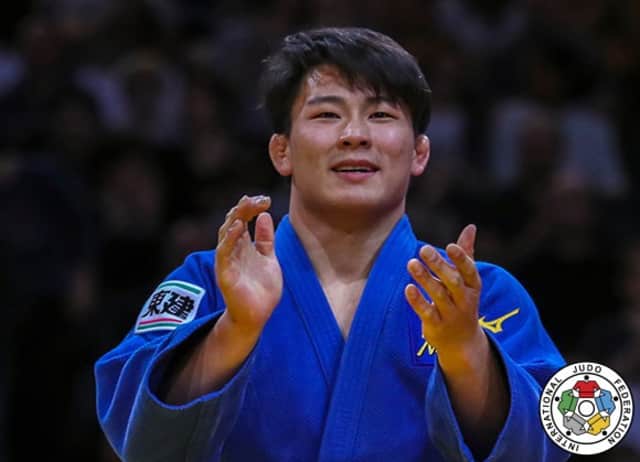 MUKAI put his hands to his face and could not believe what he had achieved, having dreamt about this day for years, while GVINIASHVILI, who missed a golden opportunity for a second Grand Slam title was clearly in pain but it was mostly his pride that was hurt. Instead of celebrating winning one of the most coveted titles in the sport, MUKAI rushed over to help the injured GVINIASHVILI off the tatami towards his coach which the teeming crowd recognised with applause and a standing ovation.

In the first semi-final GVINIASHVILI convincingly defeated World Judo Masters bronze medallist NAGASAWA Kenta (JPN) by ippon with 71 seconds left after the Georgian had been leading by a waza-ari score.

In the second semi-final MUKAI Shoichiro (JPN) advanced to the final after former world champion GWAK Donghan (KOR) withdrew during their semi-final from after being inadvertently hit in the eye during a gripping exchange.

The first bronze medal was won by Junior world bronze medallist Eduard TRIPPEL (GER) as GWAK could not compete having sustained a concussion in his previous contest.

The second bronze medal went to European silver medallist Axel CLERGET (FRA) who armlocked NAGASAWA for ippon after 54 seconds. The Frenchman won brilliantly worked from his back on the ground to set up the juji-gatame to bring the crowd out of their seats as they could finally celebrate a men’s team medal on day two. 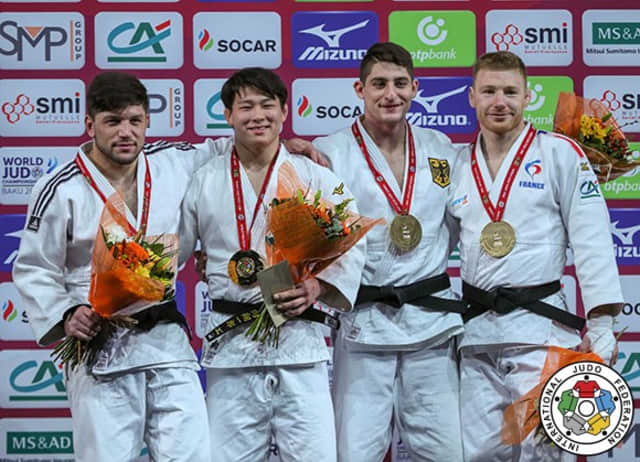 -100kg: World number one KORREL takes gold in Paris
World number one Michael KORREL (NED) won gold in Paris for the first time after his fellow finalist Tokyo Grand Slam winner CHO Guham (KOR) was ruled out by a knee injury. KORREL starred during the preliminaries with some eye-catching ippons and was on top form while CHO had also had his moments as he was once again the spoiler against the hosts’ -100kg favourite. 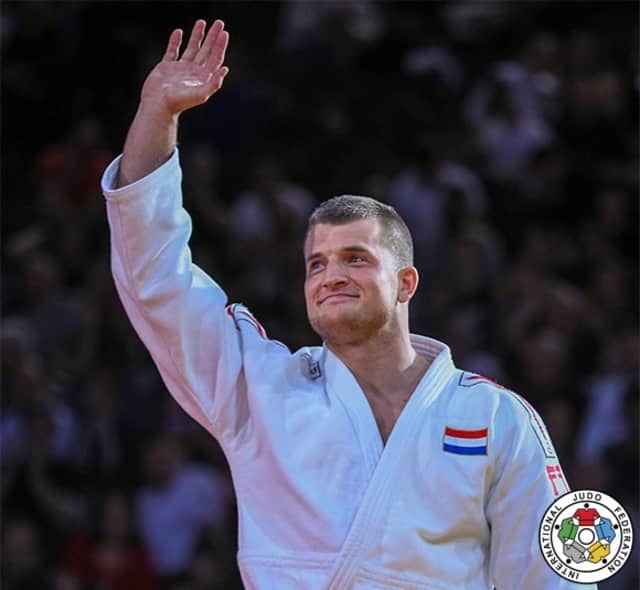 World number one Michael KORREL (NED) closed out 2017 with bronze at The Hague Grand Prix, and silver medals at the Tokyo Grand Slam and World Judo Masters. KORREL, 23, won bronze in Paris in 2015 and was one of the favourites on Sunday. Openweight World Championships silver medallist Toma NIKIFOROV (BEL), current Paris Grand Slam champion IIDA Kentaro (JPN), World Judo Masters winner Varlam LIPARTELIANI (GEO) and Portuguese powerhouse Jorge FONSECA (POR) – who has a habit of producing the spectacular in Paris – were also expected to shine on Sunday.

In the second semi-final Olympic bronze medallist Cyrille MARET (FRA) was emphatically dispatched by CHO after two minutes of golden score with a beautiful low left-sided ippon seoi-nage which silenced the crowd.

Maret was not in the rhythm the whole match and was penalize twice for passivity. But after four minutes, as nothing was scored the athletes entered the golden score. This was the time MARET chose to finally score and to release the energy he had keeped during the day. After a long accolade, the Frenchman warmly thanked the public that supported him throughout the competition.

In the other bronze medal contest, Lipparteliani who was eliminated in quarter final by Maret, after a terrific match won by waza-ari to enjoy being on the podium. 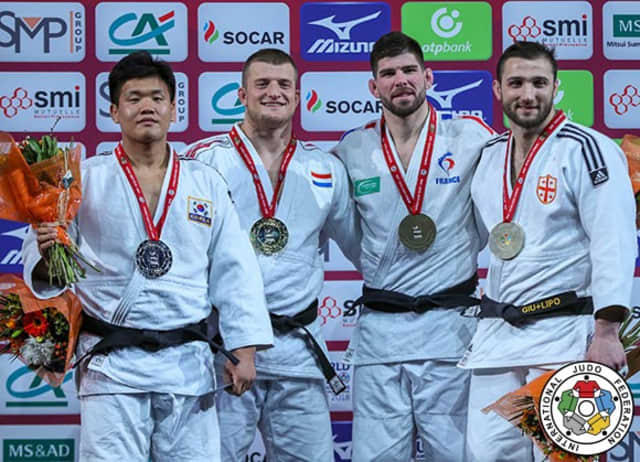 +100kg: KAGEURA Concludes Japanese harvest in Paris
The last final of the weekend opposed KAGEURA, Kokoro (JPN) and KIM Sungmin (KOR). In less than a minute both athletes were penalized with two shido each and had no other choice than to attack, which they did but 1:52 were necessary for the Japanese to score a beautiful ko-uchi-gari for ippon. It is the first gold medal for KAGEURA in a Grand Slam and the fifth gold for Japan here in Paris. 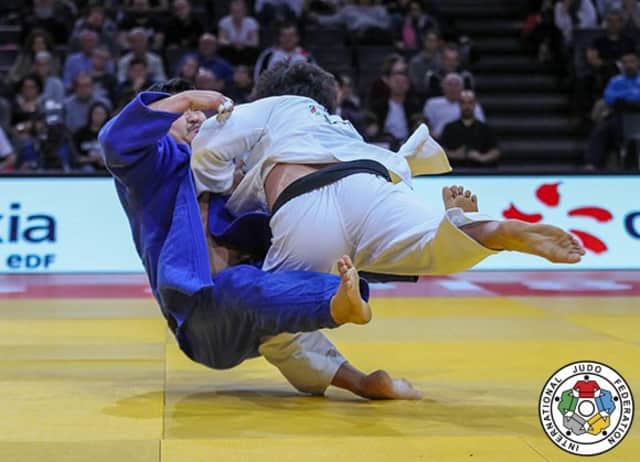 World Judo Masters winner Guram TUSHISHVILI (GEO) finished fifth in Paris last year before his meteoric rise towards the top of the category. The 23-year-old, who is the number two in the world, wont the Baku Grand Slam and European Championships last year and gave two courageous performances against double Olympic and 10-time world champion Teddy RINER (FRA) who did not compete this weekend. Olympic champion Lukas KRPALEK (CZE) has won two Grand Prix since stepping up the heavyweight field and is improving with every competition as he gets more experience under his belt against the biggest and the best at +100kg. KRPALEK took silver at the Tokyo Grand Slam in December and recorded the best result of his brief heavyweight foray on Sunday as he took the bronze.

In the first semi-final World Judo Masters winner Guram TUSHISHVILI (GEO) was disqualified against KAGEURA making contact with the face of his opponent with his knee while trying to adjust his position on the ground.

In the second semi-final Olympic champion Lukas KRPALEK (CZE) was beaten by Asian Championships winner KIM Sungmin (KOR) by a waza-ari from a ura-nage.

In the first bronze medal contest, the solid Roy MEYER (NED) faced the -100kg Olympic Champion, Lukas KRPALEK (CZE) who move up to the heavyweight category after the last Olympic Games. If nothing was scored during the regular time, KRPALEK scored the first in the golden score but the action was cancelled by the video refereeing jury. A few seconds later, MEYER engaged a uchi-mata that was countered by the Olympic Champion.

The second and last bronze medal contest saw former Abu Dhabi Grand Slam silver medallist Aliaksandr VAKHAVIAK (BLR) take the final place on the men’s heavyweight podium was TUSHISHVILI was restricted from competing due to being directly disqualified in his previous contest. 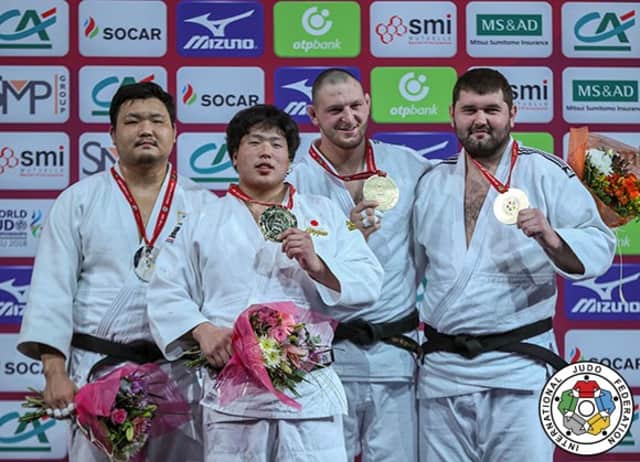 News
THIS IS JUDO

News
YOUTH IN THE SPOTLIGHTS

News
Paris Grand Slam 2018: THE SUPERSHOW IS ABOUT TO START