Horizon Gets Brighter in Antalya

Written by Nicolas Messner, Jo Crowley on 01. Apr 2021
Share
After one day of competition in Antalya, for the 2021 edition of the Grand Slam, we have five countries taking gold: Italy, Canada, Belgium, Japan and Uzbekistan. We could guess some of those judo nations, but for some of the athletes who stepped on top of the podium, it was not obvious at the beginning of the day that they would win. This is the beauty of judo, where anything can happen in the blink of an eye.

In Tashkent we saw the strength of the Asian countries stride on to the tatami, with teams from Mongolia and Korea dominating. In Tbilisi we watched the home team inspire one another to the podium, leading the medal table, despite some of their most prolific medallists not showing their past flamboyance. How is it that such a small judo nation can arrive at this sport’s door with such depth in the men’s categories and now the Georgians are knocking at the women’s category entrances too.

In Turkey we are seeing diversity and a convergence of problem-solving, with Asia, the Americas, Africa and Europe all having athletes in the final block of day 1. The little niggles and timing issues are gradually being rectified and the inactivity of the pandemic period is looking further and further behind us.

All weight groups have provided tactical interest and brilliant flashes of judo mastery, but it is Abe at -66kg and the Canadian duo at -57kg who are really under the spotlight. At the end of the day we can say that the horizon gets brighter for some athletes, when for others there are still many questions to be answered.

-48kg: Francesca MILANI enters Olympic Qualification In general the world ranking has real meaning. In other words, to be well ranked is a pledge to appear in a good place at the end of the competition. However, it was a completely new and original final which we attended, since the two Italians, Francesca MILANI (ITA) and Francesca GIORDA (ITA), respectively 34th and 37th in the world, qualified to compete for the gold medal. Beyond the medal though, the two Transalpine athletes carry out here a very interesting operation with the 1,000 points which go to the gold medal winner and the 700 for silver. It is a clear, solid operation on its own terms but it also relaunches competition between the two for the one and only Olympic place. We note here that Milani seems to have found a period of consistency, having won her first ever grand slam medal last week in Tbilisi. That’s two finals in two weeks and is not to be ignored. 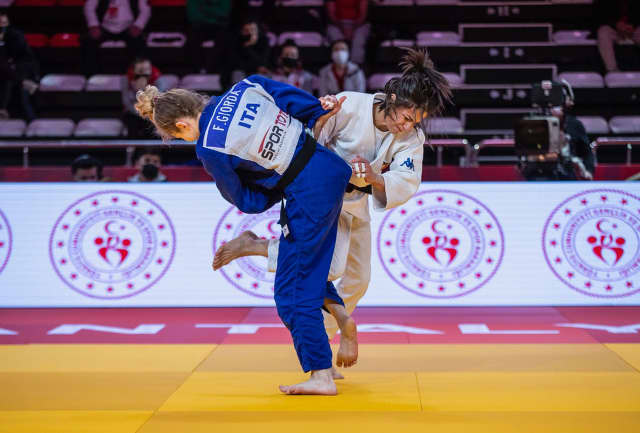 In the final, MILANI took advantage over her teammate, as the latter was penalised three times and she steps concretely into Olympic qualification. 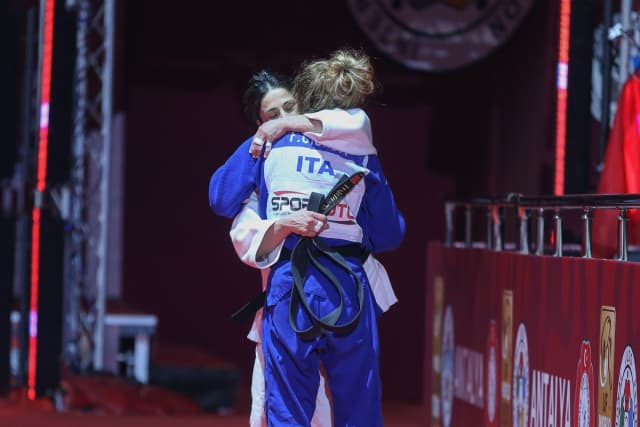 The Italian performance obscures the competition day of Olympic champion Paula PARETO (ARG), seeded number one but eliminated by MILANI in the quarter-finals. Overcoming her disappointment at not reaching the final, PARETO nevertheless qualified for the bronze medal contest against Turkey's Gulkader SENTURK who last medalled with a bronze obtained in Zagreb in 2019. It was the Turkish judoka who played the right strategy and was overjoyed to take today’s bronze. This puts her in contention for Olympic selection.

Another favourite of the competition, Shira RISHONY (ISR), also failed to reach the final and had to be content with the possibility of a bronze against Anastasia PAVLENKO (RUS). With some lightning fast transition phases and a threat to Rishony’s arm, it looked like a precarious position to be in but the Israeli stepped up the pace further and threw for waza-ari just into the last half minute of contest time and it was enough to secure the medal and the points. Rishony is edging towards top 8 seeding and it seems to be what she’s hunting for, for the Olympic Games. 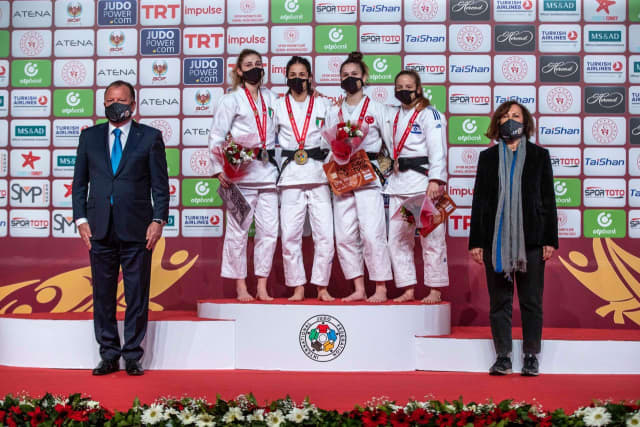 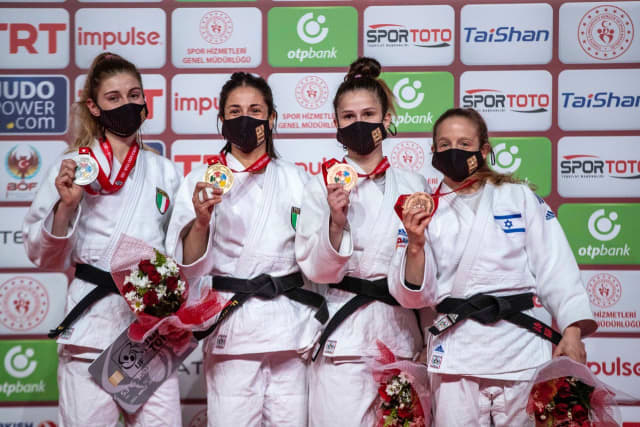 -60kg: French Optimism and Belgian Realism It has been a long time since we have seen the French at this level. Behind the performances of King Teddy Riner and the French women's team, the men are struggling to find their mark on the international tatami, while in the opinion of all, French judo remains a benchmark. During the entire elimination phase, Walide KHYAR did not acknowledge those trends and conscientiously, without making a major mistake, qualified for the final, a performance that reminds us of his route to the final in Abu Dhabi in 2019. In front of him, the Belgian, Jorre VERSTRAETEN had a very good run in the second half of the draw to reach the final as well. 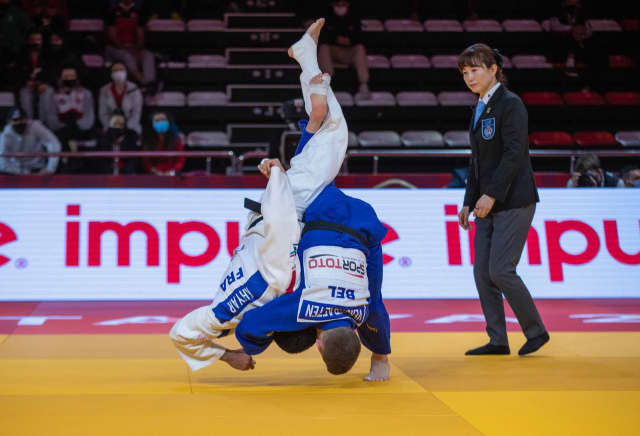 Walide KHYAR was announced slightly injured entering the final, but he remained optimistic after a very good start to the day. It was VERSTRAETEN who showed great realism by engaging a powerful o-uchi-gari which he turned into an acrobatic uchi-mata for an ippon without discussion and a first gold medal in a grand slam. 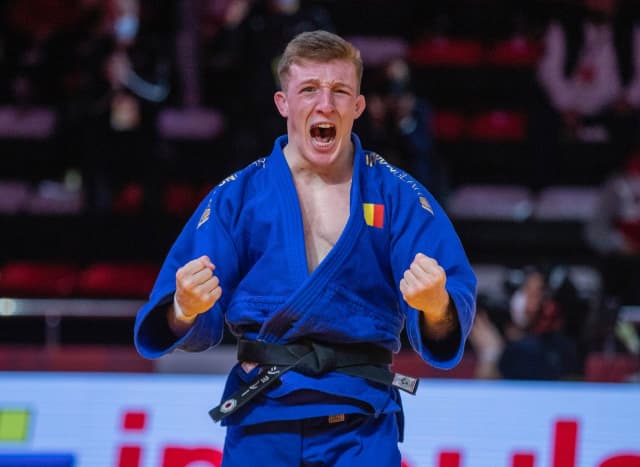 Third in the World Judo Masters in Doha last January, Albert OGUZOV (RUS) continues his good momentum, which once again allows him to qualify for the final block. In the match for the bronze medal he was opposed to YANG Yung Wei (TPE), finalist of the same World Masters just a few months ago. Combining a clean morote-seoi-nage for waza-ari with a sankaku-jime into a hold down, YANG concluded his day with that bronze.

Following in KHYAR's footsteps, the second Frenchman in the category, Romaric Wend-Yam BOUDA, also qualified for a medal contest, against Salih YILDIZ (TUR), who was supported by a whole country. It was the French athlete who won the medal, his first in a grand slam, after scoring a waza-ari with an opportunist’s counterattack, turned into a o-uchi-gari. 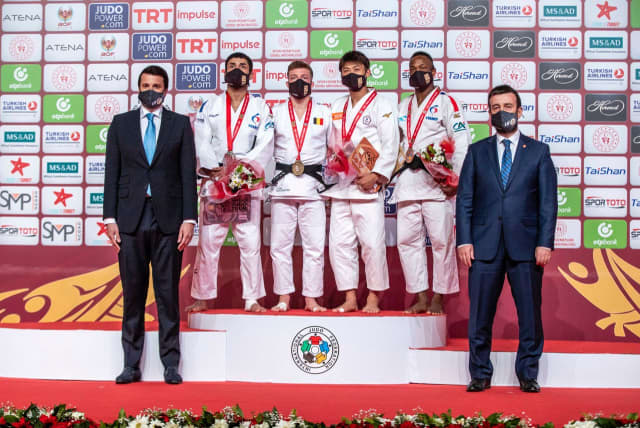 Medal, flowers and prize money were presented by Mr Max-Hervé George, CEO of Ultima Capital and Mr Ömer Altunsoy, Deputy Director General of Sports Services of the Ministry of Youth and Sports of Turkey 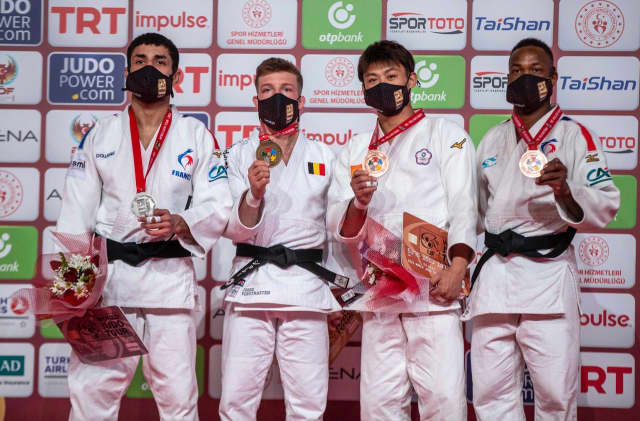 -52kg: Golden KELDIYOROVA for Uzbekistan Fifth in Tel Aviv a few weeks ago, Estrella LOPEZ SHERIFF (ESP) moved up a gear by qualifying for the final of the category, to face the 2015 cadet world champion and 2019 World Judo Masters bronze medallist, Diyora KELDIYOROVA (UZB), who confirmed the rise in power of Uzbek women. 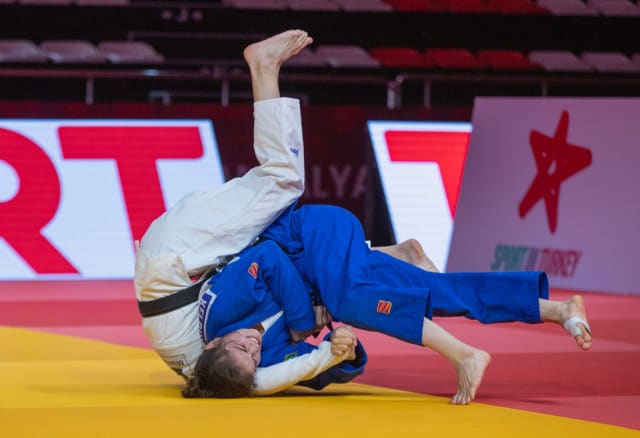 In less than 30 seconds, KELDIYOROVA executed a perfect sode-tsuri-komi-goshi for a superb ippon, giving no chance to LOPEZ SHERIFF to escape. 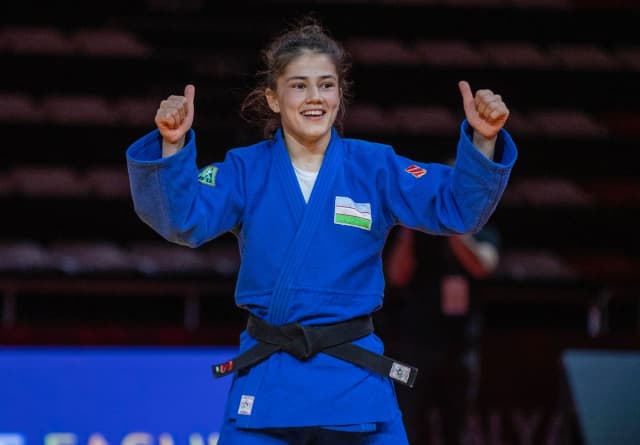 Gili COHEN (ISR) came to give the best of herself and to win a medal. Gold was undoubtedly her goal, but she had to settle for the bronze medal match against the Polish fighter Agata PERENC (POL), already holder of 6 medals at Grand Prix level, but none on the higher Grand Slam stage. It was the experienced Gili COHEN who ultimately won the medal and can go back home with a good taste of performance judo.

At home, Zeliha CINCI (TUR), without reference on the international circuit, managed to qualify for a bronze contest against the other Polish athlete in the category, Aleksandra KALETA. Within 35 seconds KALETA had already scored twice to win the bronze medal. 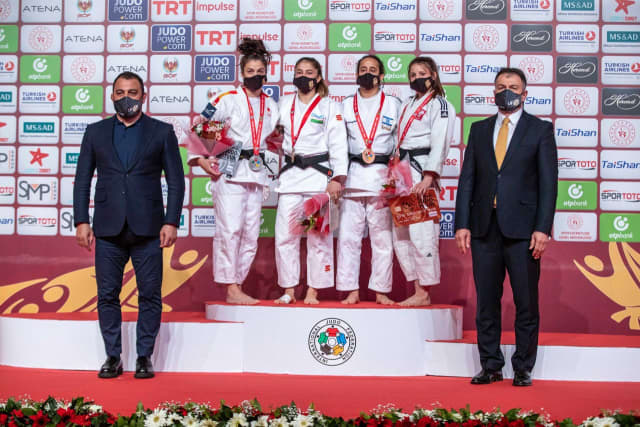 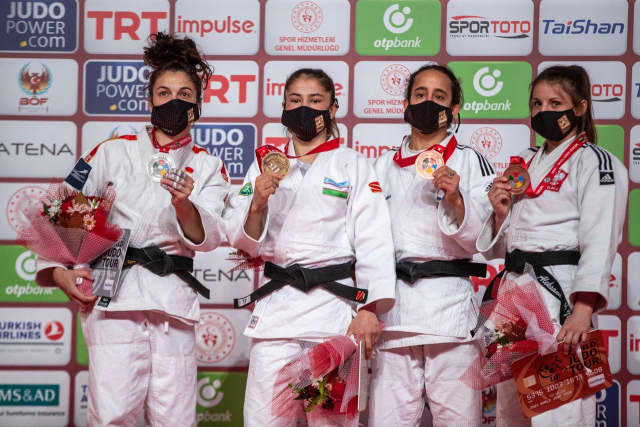 -66kg: ABE is Back on Top This was expected, even eagerly awaited: the qualification of ABE Hifumi for the final of the second men's category of the day. After his Olympic qualification was obtained at the end of 2020 in a single match against his teammate MARUYAMA Joshiro and especially today, after passing the obstacle Of Russia’s Beslan MUDRANOV (2016 Olympic champion at -60kg) in the first round, ABE negotiated the prelims perfectly to enter this long-awaited final. There he found Alberto GAITERO MARTIN (ESP), seeded number four in the competition. 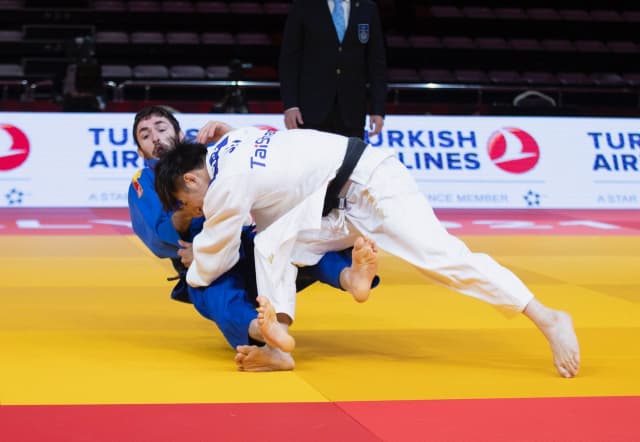 We can not say that it was a walk in the park for the double world champion, ABE Hifumi. Pushed into its entrenchments by an in phased, focussed GAITERO MARTIN, ABE was even penalised twice, to come back to meet the Spanish judoka on level terms having dominated the movement early on. Would the Gaitero-Martin be able to make ABE doubt himself? It is undoubtedly in these moments that the Japanese and ABE even more than another, are the strongest. With a ko-uchi-gari coming from nowhere, ABE finally threw his opponent, after more than two minutes of golden score. 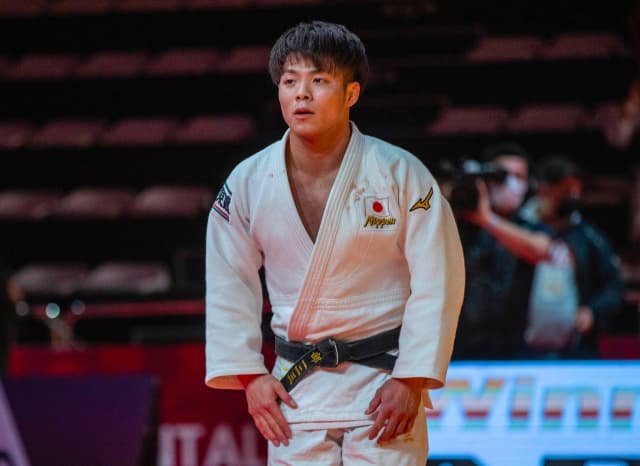 The 2019 European Champion, Orkhan SAFAROV (AZE) qualified against Murad CHOPANOV (RUS), 2019 European champion also, but in the u23 age band. CHOPANOV won his first medal in a Grand Slam with a powerful ura-nage for waza -ari.

A third Frenchman qualified for the final block, Kilian LE BLOUCH, against Azerbaijan’s Nijat SHIKHALIZADA, finalist in the Baku Grand Slam in 2019. The latter produced one of the most spectacular movements of the final block, with a superb ashi-waza that made LE BLOUCH literally fly for ippon. 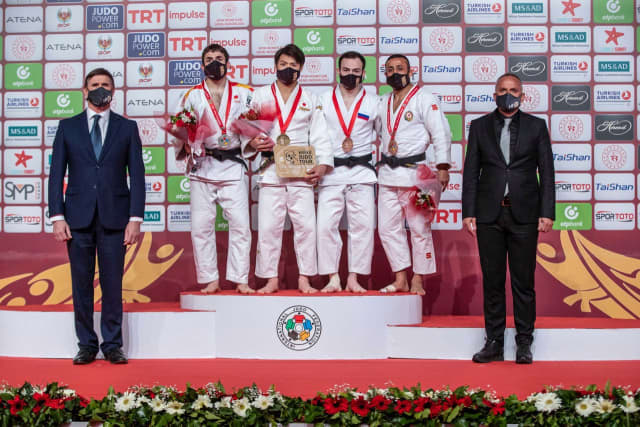 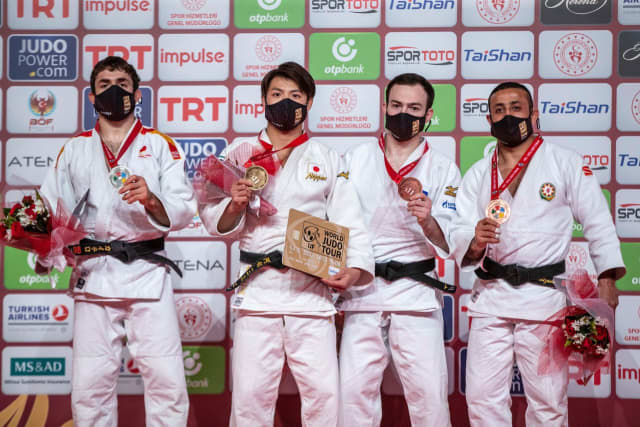 -57kg: DEGUCHI Scores Points If we were impatient while waiting for the final of ABE Hifumi in -66kg, what about the final between the Canadian rivals, Jessica KLIMKAIT (CAN) and Christa DEGUCHI (CAN)? One is world number one and the other is the reigning world champion, but there is only one ticket to the Olympic Games this summer. A total joy for one, but a huge disappointment for the other. 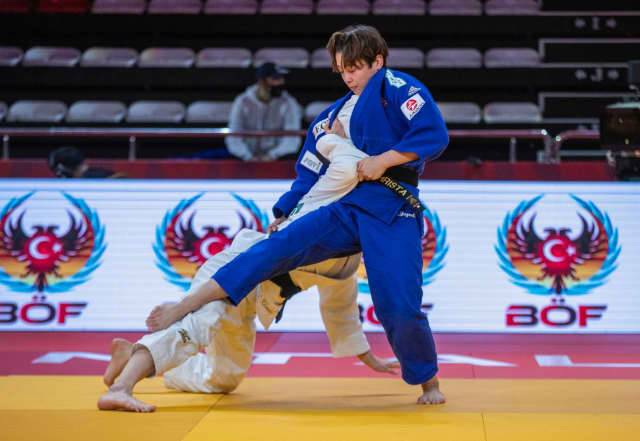 We obviously expected a close fight and it was, as the two competitors know each other so well and they want to avoid making the slightest mistake which could have so much implication. On the one hand, we had DEGUCHI's calm and precise judo, trying to put her hands down perfectly, to aim and launch movements from a distance, like a fencer coming to carry the final blow. On the other hand, we had KLIMKAIT who swirled around her opponent, regularly disappearing under her centre of gravity with countless drop seoi-nage, but most did not really endanger DEGUCHI. In the end, it was these same movements, ones that hurt all her opponents so much, that cost KLIMKAIT the victory, penalised several times for false attacks. DEGUCHI claimed precious points for Olympic qualification but she knows that it's not all over yet. This is why we have not seen her explode with joy, but we saw the discontent taking shape on Jessica's face. How fierce the battle is, how beautiful the battle is. We spotted them chatting closely, as teammates, as they left the podium and maybe this is the most important, valuable part of the rivalry. 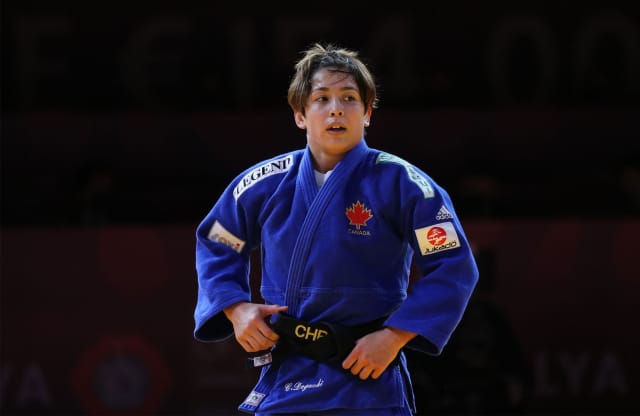 Many countries would like to have such a choice to make. Gauging themselves from a distance, the victories of one responding to that of the other, but there still remains a huge decision between them in a dream final and it was precisely this match that closed the first day of competition in Antalya.

For a place on the podium, we found three time grand slam medallist, Loredana OHAI (ROU) and the 2019 world bronze medallist Julia KOWALCZYK (POL), facing each other, with the bronze medal going to KOWALCZYK.

In the match for the second bronze medal, Ghofran KHELIFI (TUN), winner of the 2019 African Games, was up against LU Tongjuan (CHN), bronze medallist in Hohhot in 2019. 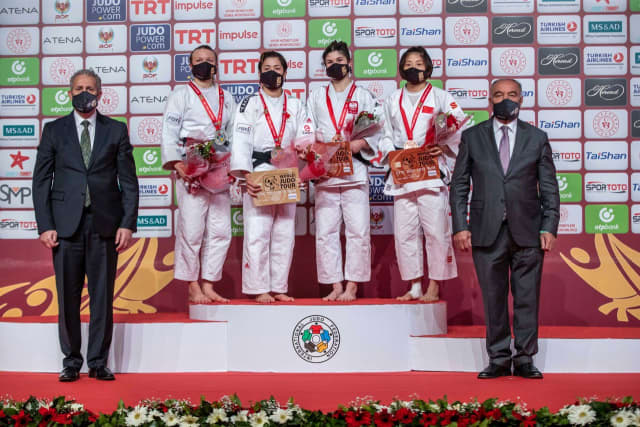 Medal, flowers and prize money were presented by Mr Mohammed Meridja, Education & Coaching Director of the International Judo Federation and Mr Metin Ozkan, Advisor to the President of the Turkish Judo Federation

Final KLIMKAIT, Jessica (CAN) vs. DEGUCHI, Christa (CAN) 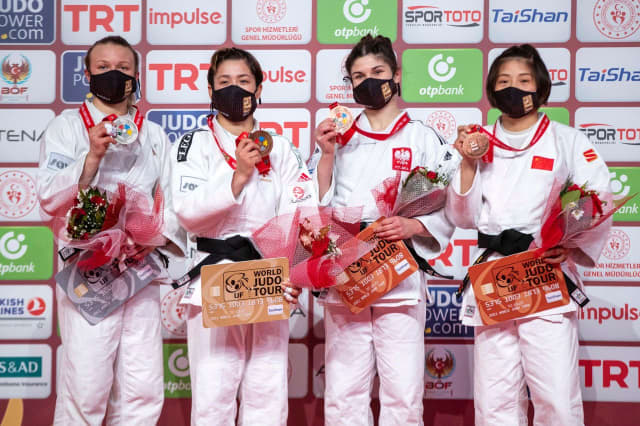