JUDO IS OUR RIGHT

Written by Nicolas Messner on 20. Feb 2018
Share
IJF JOINS #WithRefugees CAMPAIGN AND LAUNCHES JUDO FOR PEACE ACTIVITIES IN MALAWI. Malawi is probably not the first country to be thought of when it comes to the African continent and its majestic desert or tropical landscapes. Enclosed in southern Africa, between Mozambique, Zambia and Tanzania, it is bathed in sunshine and travelled from north to south by the magnificent sceneries of the Great Rift. With 80% of its export earnings coming from agriculture, an important part of its population lives in rural areas, the rest being spread over a few major cities, the most important being its capital Lilongwe. 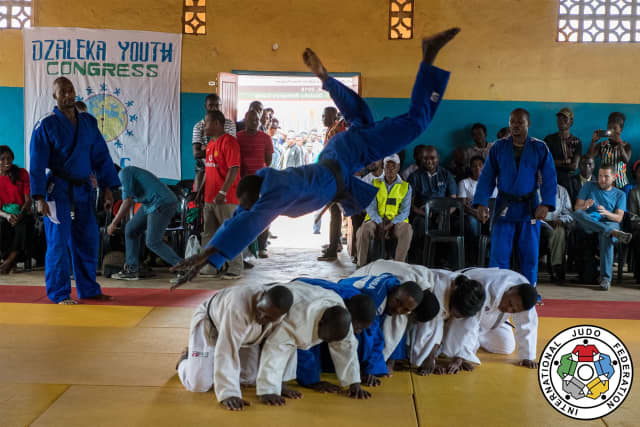 Malawi is also the heart of Africa as evoked by the nickname of the country, "The Warm Heart of Africa", that all residents like to remind visitors and this is probably what strikes the most when you arrive in the country: the human warmth that emerges from it. Malawi is a welcoming country!

Perhaps this is one of the reasons why it has become a privileged destination, if not chosen, by refugees from many African countries who, because of war or conflict, found themselves thrown on the roads of the exodus, abandoning everything behind them, and this is undeniably the reason why the national judo federation decided to launch a vast Judo for Peace programme to help and support refugees, in the Dzaleka refugee camp.

It takes only 40 minutes from Lilongwe to reach the entrance to the camp where nearly 35,000 people, of which 55% are under 17, come from some fifteen countries. Opened in 1994, Dzaleka has seen its population grow steadily since the arrival of the first migrants. In addition to the second or third generation of refugees born on the spot, every week a steady stream of displaced people continues to feed what has become a real city with its centre, markets and suburbs and whose limits seem to extend like an endless elastic. But how long will it be possible to welcome more people? What maximum capacity can reach Dzaleka before the elastic cracks? It is impossible to answer those questions. But what is certain is that the lives of thousands of people are closely linked to the help they receive from the country's authorities, the United Nations via UNHCR and NGOs working in the region.

Above: Young refugees prepared banners to welcome judo in the refugee camp - Judo for All, Judo is our right

The young judo federation, created in 2010 only and led by John Kaputa (President) and Osbourne Banda (General Secretary), has limited resources. It is a fact. Yet judo is increasingly popular on the shores of Lake Malawi. With seven clubs and around 900 judoka to date, we can even say that our sport is a great success. Each year, a national championship for seniors and one for juniors are organised, as well as the tournament of the Ambassador of Japan who actively supports the development of the sport in the region.

With around 20 coaches spread all over the country, the federation decided to help the refugees in the Dzaleka camp and sent in late 2017 a complete development program which was approved by the International Judo Federation, which was present in Malawi with its Judo for Peace Director, Nicolas Messner, just a few days before the Paris Grand Slam, to officially inaugurate the programme. This is the third project piloted by the IJF, the first having been opened in Turkey, in Kilis for the benefit of Syrian refugees in 2015, and the second in Zambia in 2016, while a vast aid programme to refugees is underway in South Africa, under the leadership of Roberto Orlando, a graduate of the IJF Judo Academy. 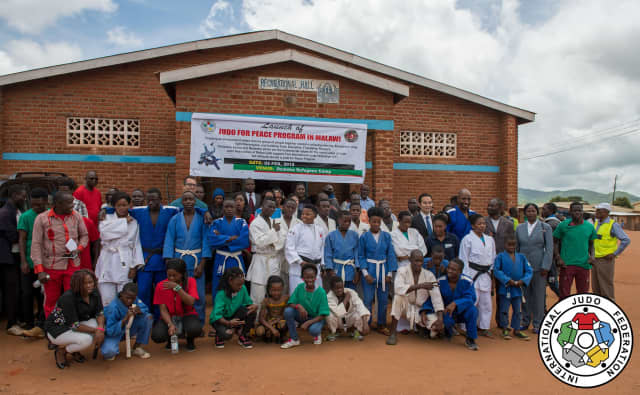 If judo is very adapted to the condition of the refugees, it is because it can restore their self-esteem and the desire to fight, in the noble sense of the term, against inequalities and injustice. Olivier knows the subject: he arrived in Malawi in 2000 from the DRC, after weeks of wandering on dangerous roads, and he lived in Dzaleka camp for more than a year before he could integrate with the local population: "I used to live in Goma, in eastern Congo, and I was already taking care of young refugees. I was a judoka myself and I knew what our sport could bring to these populations. I did not imagine myself as a refugee, but when the situation became too risky because the children I was in charge of were in danger of death, we flew with them and after a long journey, we finally arrived at Dzaleak, safe and sound."

There was no national federation at the time, but Olivier, thanks to Judo, was gradually able to integrate and he is now a French and physical education teacher in Muzuzu in the north of the country: "When I arrived, life was difficult, but I had studied in the Congo, and once out of Dzaleka, I was able to integrate the French cultural centre of Muzuzu where I still am. I started judo at the age of twelve in my country and I quickly loved the sport. I was champion of Congo. Once in Malawi, I wanted to resume judo, but there was no training structure so at the beginning we had to improvise, we trained on sawdust with a tarpaulin over, and we we made our judogi jackets ourselves. Then I was able to train soldiers and little by little we started judo in Malawi and I helped to create the federation." 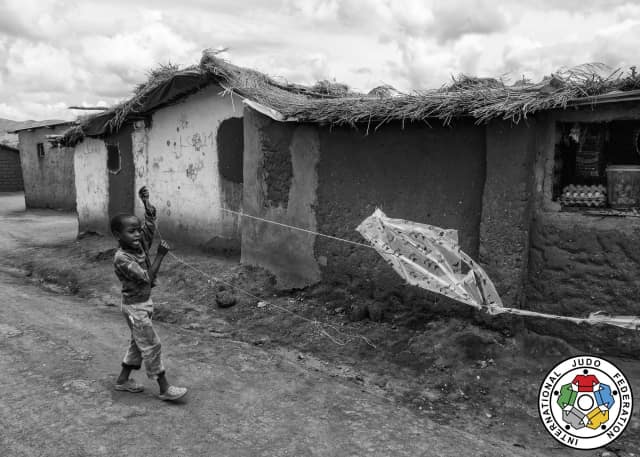 Above: most of the inhabitants of the Dzaleka refugee camp are under 17 years old

From refugee status to founding member of the National Judo Federation, there was only one step that Olivier did not hesitate to take and he is now involved in the Dzaleka camp programme: "I really believe we can change the lives of all these young people. I've been there, I know exactly what are the dangers of idleness and lack of perspective. I want to help this troubled youth."

The launch ceremony of the Judo for Peace programme took place on Friday, February 2, in Dzaleka in the presence of the representative of the IJF, those of the National Federation, its partners and the National Olympic Committee, the camp authorities, the Dzaleka Youth Congress, the Ambassador of Japan, UNHCR and Malawi government delegates, and the residents themselves, who discovered a judo demonstration and a cultural program organized by the refugees. This day was marked by mutual aid and mutual prosperity and as we publish these lines, the first judo activities started in Dzalaka. After the launch the IJF delegation was guided throughout the camp to discover the living conditions and to interact with the population. After the official launch in the camp, all officials and partners were invited to join at the British High Commissioner house where they could follow an other judo demonstration in the presence of the Minister of Home Affairs of Malawi. 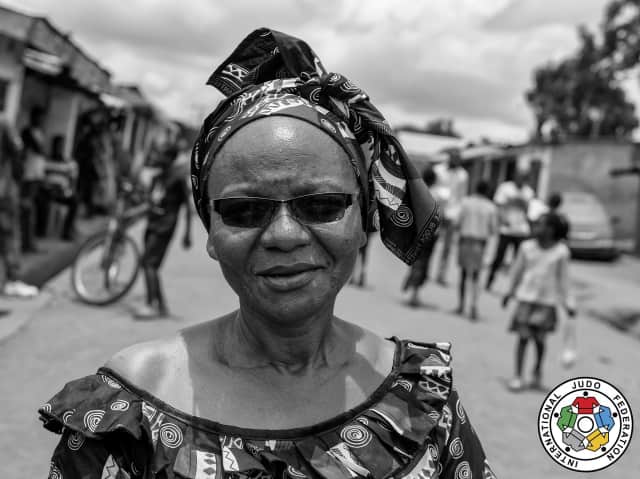 Above: Cécile Pango is a community leader and she actively supports the Judo for Peace programme. During the official launch of the programme, she guided the IJF delegation throughout Dzaleka.

This program in Malawi is part of the global policy initiated by the International Judo Federation around the world and is fully integrated with the #WithRefugees campaign launched in 2016 by UNHCR, with the aim of mobilizing global solidarity at a time of historic levels of displacement and rising anti-foreigner rhetoric. As recalled by the New York Declaration (September 2016), #WithRefugees aims to massively mobilize public action, innovations and solidarity for refugees.

Today, the #WithRefugees coalition includes more than 300 members, including universities, sports federations, NGOs and private sector representatives. About the program in Malawi and its campaign #WithRefugees UNHCR said: "By joining together in global solidarity, we can make a difference for families forced to flee. to a broad audience The International Judo Federation is currently supporting in Zambia, South Africa and now in Malawi to participate in Judo. UNHCR welcomes the International Judo Federation to the #WithRefugees Coalition.

In the coming months we will closely monitor the development of the Malawi programme as well as all other actions organised to support and assist refugee populations. Judo is more than a sport, it is a way of life that actively and positively helps people in difficulty.