Written by Nicolas Messner on 03. Nov 2021
Share
The 40th CISM Military Judo World Championships came to an apotheosis on Tuesday 2nd November, in Brétigny-sur-Orge, France, during the women's and men's team competition. Even if in the future it is possible for the competition to fit in with the international format of mixed teams, for the moment, these are still two separate competitions taking place during the military championships. 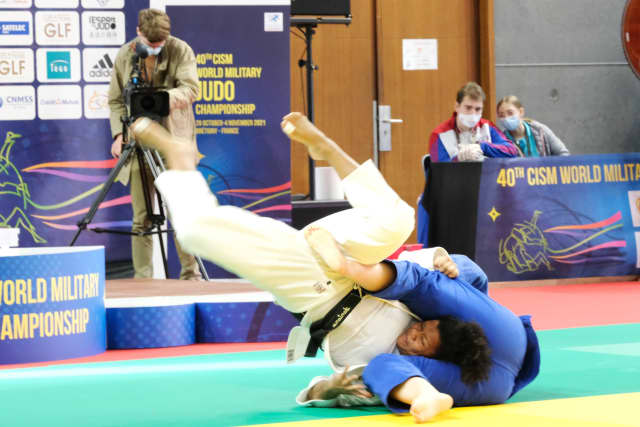 This does not prevent, however, the development of team spirit, in which women support their male counterparts and vice versa. In this game, the team which once again achieved the best performance was the French team, placing both its male and female groups on the highest step of the podium.

This has become a habit since the historic title of the French mixed team at the Tokyo Games. Recently the French juniors did the same during the European and World Junior Championships. Such consistency at this level, whatever the category, is indicative of a great dynamic, the consequence of the creation not of a group but of a team, one in which everyone supports and encourages the rest, with heart. 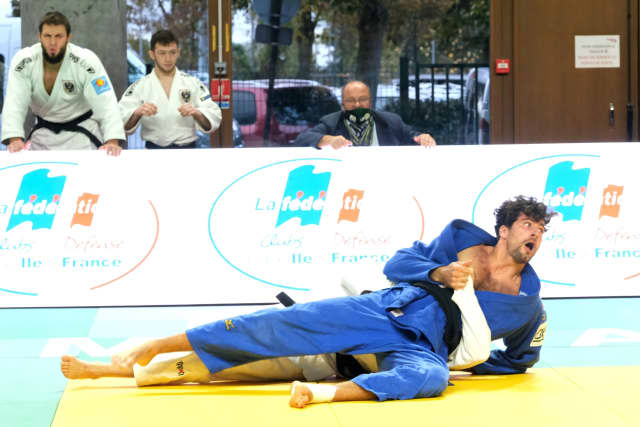 From the first preliminary rounds, the atmosphere warmed up in Brétigny-sur-Orge, demonstrating, as always, that team tournaments have that extra something that makes them attractive and exciting. Despite the absence of Russia, who were not able to line up, just at the last moment, the level was very high, with each team having the ability to shine.

We saw a Brazil and Uzbekistan entry for the men and a Brazil versus Poland match in the second round for women, which were very promising. Both lived up to their potential.

At the end of the day, we witnessed France and Poland in the women’s final and an unexpected meet for France and Austria in the men’s final, with the Austrians having beaten the Uzbeks in a decisive array of contests. The men of Ilias Iliadis had defeated Brazil five seconds from the end of the last fight in the previous round, when Momonov scored ippon against a leading David Lima. Such reversals can only happen during team competitions. 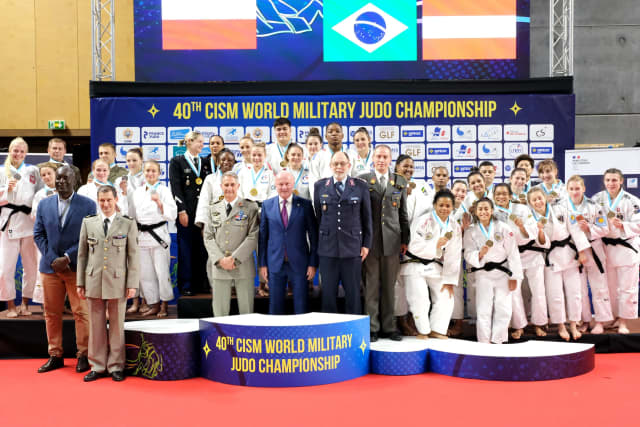 In the women's final it was Julia Tolofua, the individual military world champion two days before, who managed her match calmly, winning on penalties. Then Cheyenne Mounier scored a beautiful ippon against Karolina Pienkowska, an athlete known on the international circuit, already victorious at grand prix level and a grand slam finalist. Poland attempted to claw it back after a victory from Anna Kuczera against Véronique Mandeng but the last point was for France, earned by Gaëtane Deberdt who pinned Arleta Podolak, former world junior champion. Then it was time for the first Marseillaise of the day! 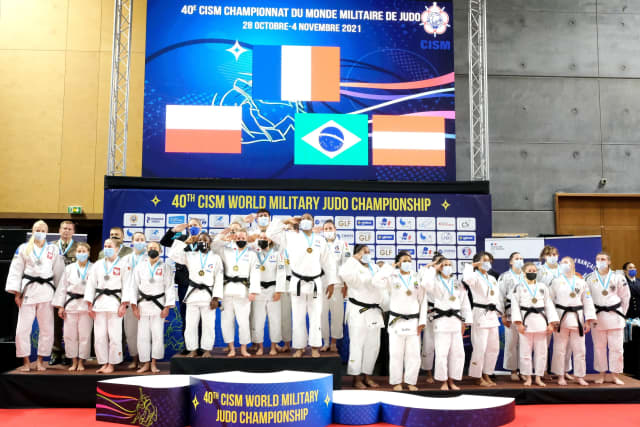 In the men's competition it was Benjamin Axus (-73kg) who opened the bidding in a remake of Saturday’s final against Lukas Reiter, the victory that time for the latter. Dangerous with his counter-attacks and leading by a waza-ari, Reiter was wrapped in a perfectly executed harai-makikomi for ippon. Hugo Métifiot added a point to the tricolour purse against Wojciech Kanik, gaining a first waza-ari with uchi-mata, before scoring ippon with uchi-mata gaeshi. Austria recovered well as Anthony Joubert was penalised three times against Marko Boubanja. Then it was 2-2 after the victory of Aron Fara over Kévin Czernik at -100kg. Everything was going to be decided by the last fight, at -60kg: Reda Seddouki (FRA) and Daniel Leutgeb (AUT). The latter was a world cadet medallist in 2018 and took bronze in the individuals on Saturday. The Frenchman quickly scored a waza-ari with kata-guruma and he held that score until the final gong. The second Marseillaise of the day was heard and it marked another victory for France as a team. 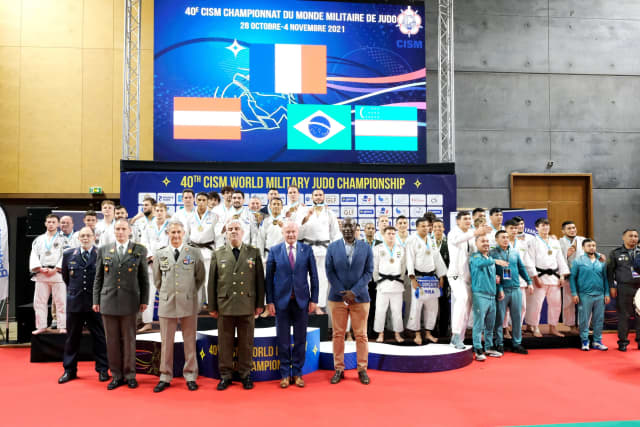 This concluded a very good week of judo at the 40th CISM Military World Championships. Both from the point of view of the organisation and the sporting level and despite the absence of certain delegations because of the global pandemic, all the lights are green. A meticulous organisation and military rigour, athletes happy to be able to compete, an atmosphere worthy of the biggest world tournaments: everyone had something to be satisfied with. 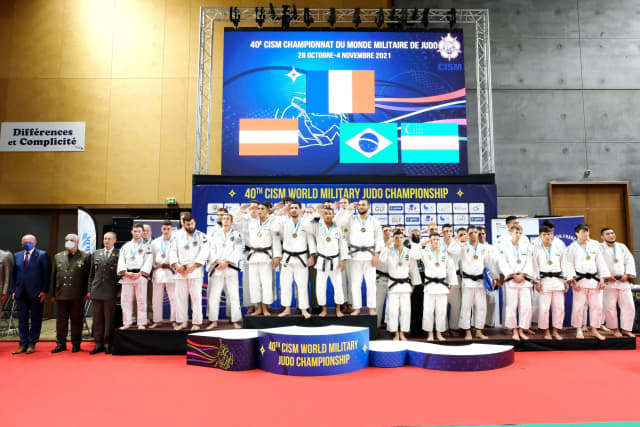 At the end of the event we can take the same conclusion as other prestigious events and get ready to start all over again. France wins as a team and climbs to the top of the medal table with twelve medals in all. Yet, history is never written in advance. Last summer Japan was virtually guaranteed to win the first mixed team title in the history of the Games. It was not the case. This time the tricolour team is full of success, but anything is possible and will always be in judo. 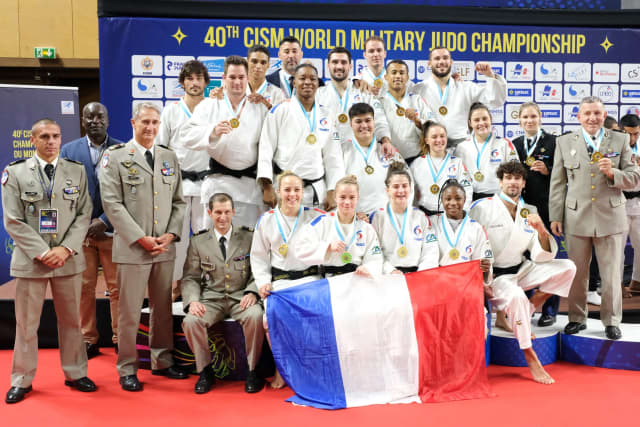 Now that the Military World Championships are over: Attention, present judogi, salute, break ranks! We are now heading to the Baku Grand Slam, part of the World Judo Tour, which will take place throughout the weekend in Azerbaijan.