Written by Nicolas Messner on 20. Sep 2019
Share
It is high-flying judo that spectators and tv-viewers had on display on this first day of the Tashkent Grand Prix. The preliminary rounds and particularly the final block were beautiful, offering matches with thrilling suspense and techniques all more spectacular than the other. In a post-World Championships context, where the best are at rest, the Russians have had a great day by winning three gold medals, ahead of Korea, which has climbed three times on the podium. To complete the trio of nations, one must add Hungary which, thanks to the experience of KARAKAS, is tonight on the podium. Japan, which did not come with its number-one team, or even not with number 2, gets two silver medals, only blocked by Russia, with athletes who could well be talked about during the next Olympic cycle. There are already 14 countries with medals after a day of competition only and the list should be longer in the days to come. 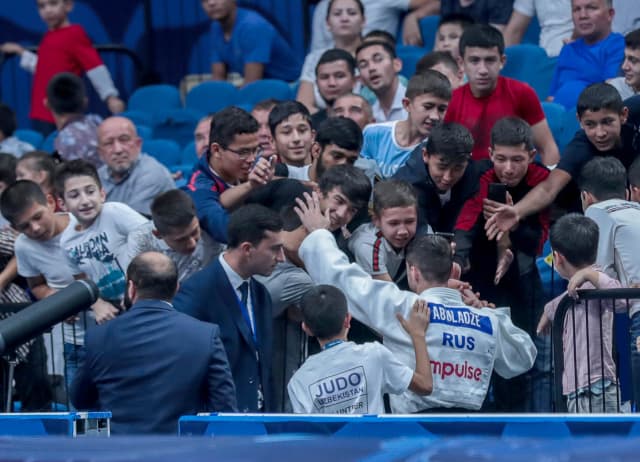 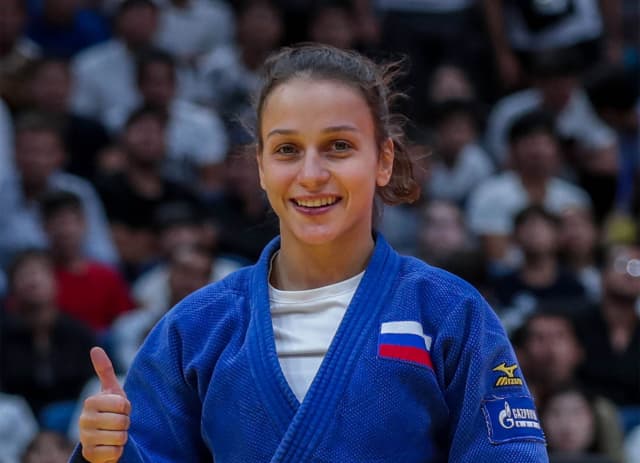 While ALIYEVA launched a first o-uchi-gari that did not bother GILIAZOVA, the latter, well camped on her legs, had only to turn the shoulders, and put her leg to block ALIYEVA and use her momentum to literally incrust her into the tatami, for a crystal clear Ippon. Good, very good judo! 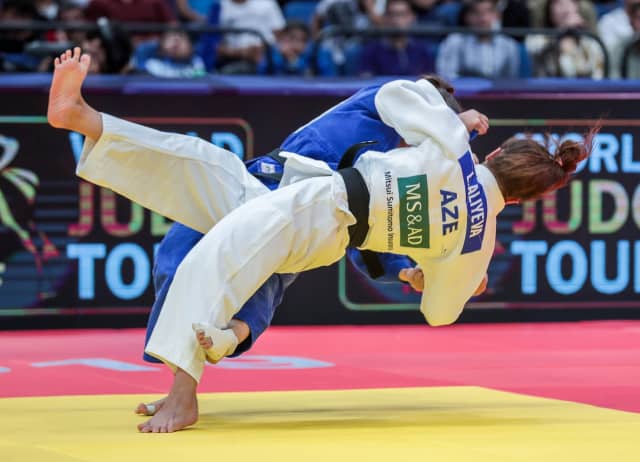 The first bronze medal contest opposed, the three time bronze medallist Katharina MENZ (GER) and Paris Grand Slam bronze medallist Melodie VAUGARNY (FRA). The Frenchwoman was the first in action after a great job at the end of the sleeves, which allowed her to trigger a magnificent low tai-otoshi to lead with a first waza-ari. Always on the attack before her opponent, VAUGARNY made her opponent penalized for passivity. MENZ, who then launched a desperate left handed hip movement, but the attack was sorely lacking control in the upper body and VAUGARNY immediately countered for an unstoppable Ippon who offered her first medal in a Grand Prix.

The second bronze medal match did not offer much suspense, as Maryna CHERNIAK (UKR) sent Shushila Devi LIKMABAM (IND) twice on the mat, on precise counter attacks to step in the podium. 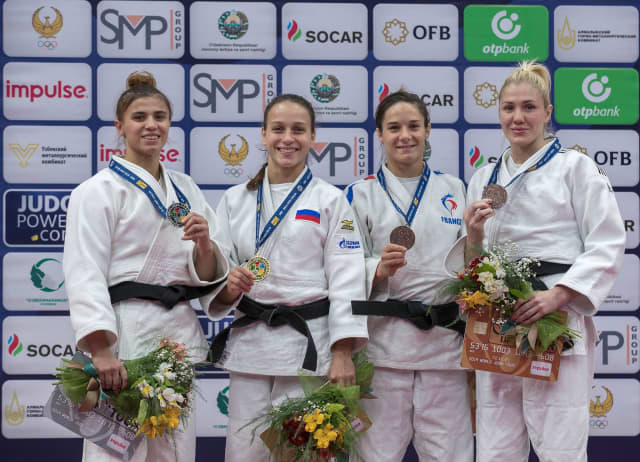 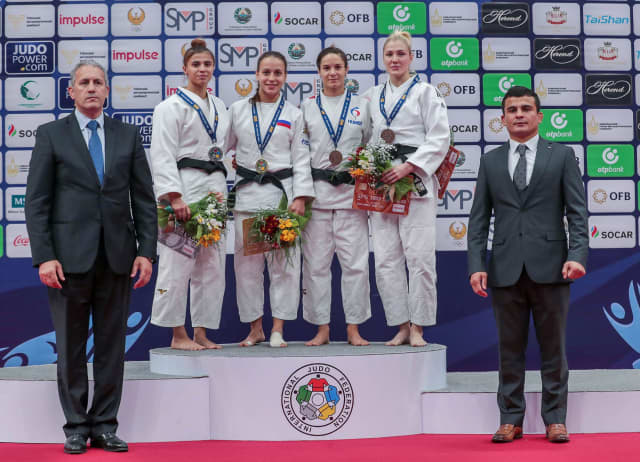 The silver medalist of the Olympic Games in Rio in -48kg, now competing in -52kg, JEONG Bokyeong (KOR) was opposed to BISHRELT Khorloodoi (MGL) for the category win. It was on a perfect kata-guruma that the Korean won her second Grand Prix title in Tashkent.

In the first final for the bronze medal, Soumiya IRAOUI give Morocco the chance to win a medal while she won by two waza-ari against the Kazakh Anna KAZYULINA. Morocco relies heavily on its flag bearer, Asmaa NIANG, who will be on the run on the second day of competition. The country can now count on Soumiya IRAOUI to win medals as well, which is very positive for Morocco and Africa. 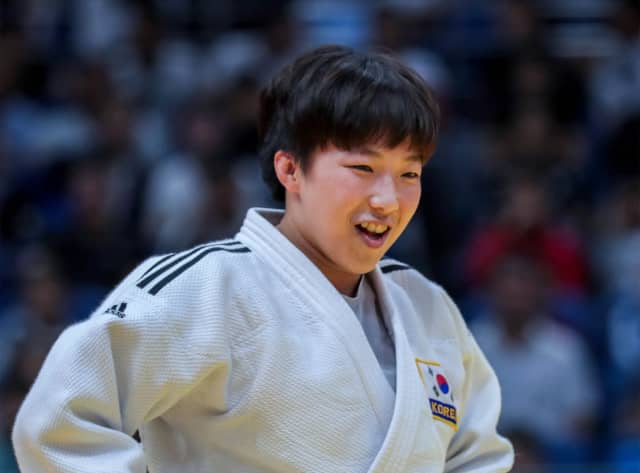 By winning the second match for the bronze medal, Gefen PRIMO (ISR) won her fifth Grand Prix medal. While she had engaged an o-uchi-gari, her opponent Anja STANGAR (SLO) tried to counterattack, but PRIMO kept control to overthrow her and score a waza-ari that she was able to keep until the end of the match. 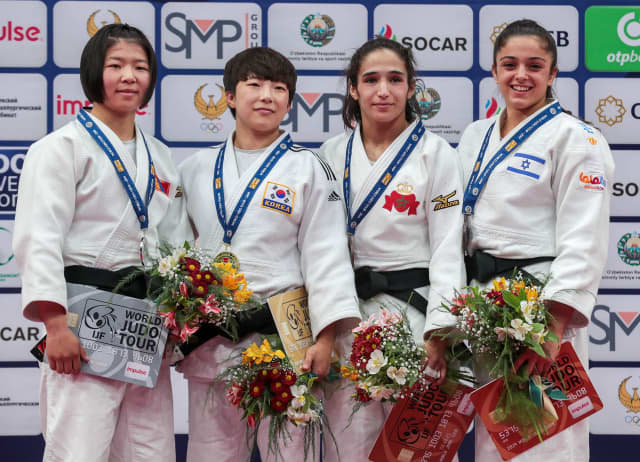 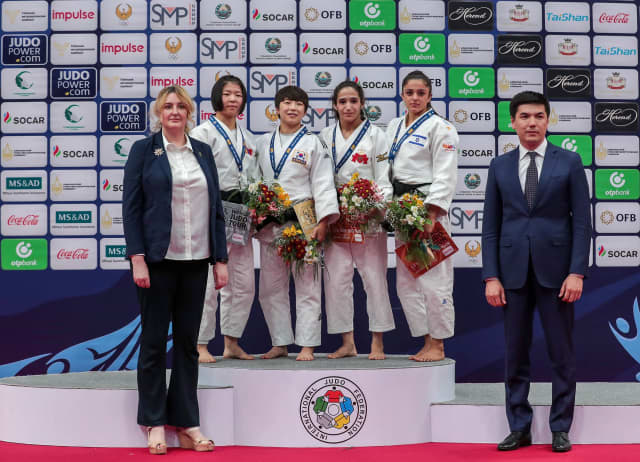 -57kg: Experience of KARAKAS pays off in Tashkent

It is the experienced KARAKAS Hedvig (HUN) who won in Tashkent after a tactical fight that was essentially led by a kumikata battle. Under pressure from the two shidos she had received, the Hungarian did not lose focus and scored a waza-ari on sumi-gaeshi about thirty seconds from the end. She then only had to control the rest of the final to win her second Grand Prix gold. 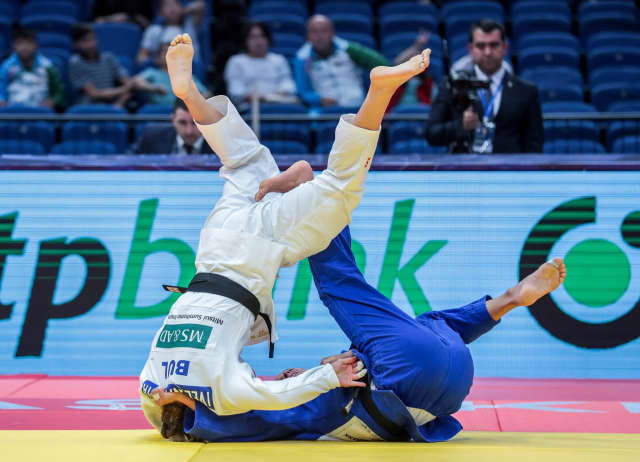 In the first match for the bronze medal, the score was very tight, as neither Marica PERISIC (SRB) nor KWON Youjeong (KOR) could score for most of the contest. It was only five seconds before the end of the match that KWON scored a waza-ari on a slightly confusing action, but that was enough to give her the medal. 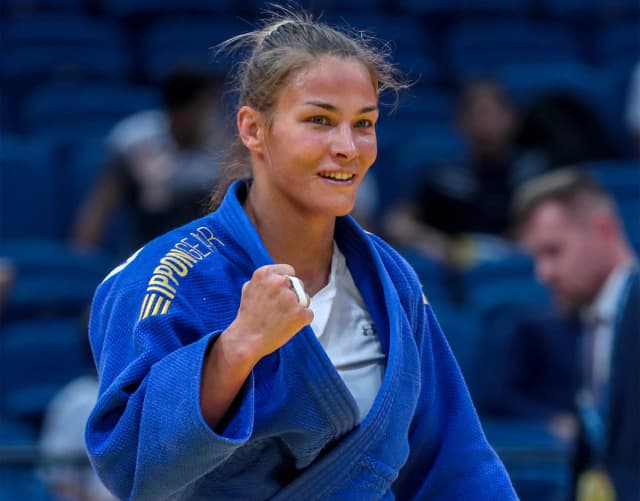 She was once again very close to getting on a Grand Prix podium. Sabrina FILZMOSER (AUT) did not miss much to do it. But opposed to KIM Jandi (KOR), she finally had to bow after she was countered and then immobilized. 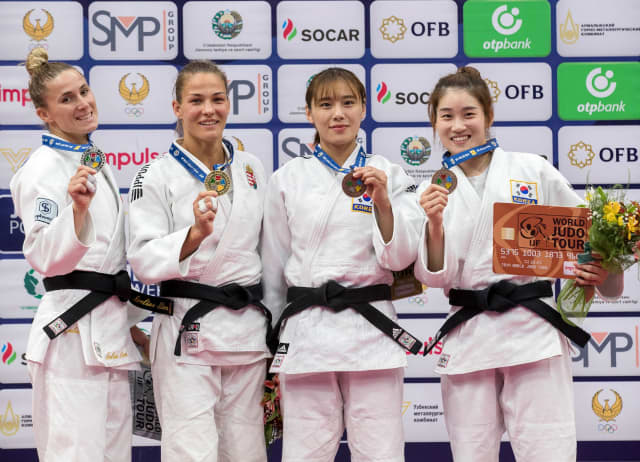 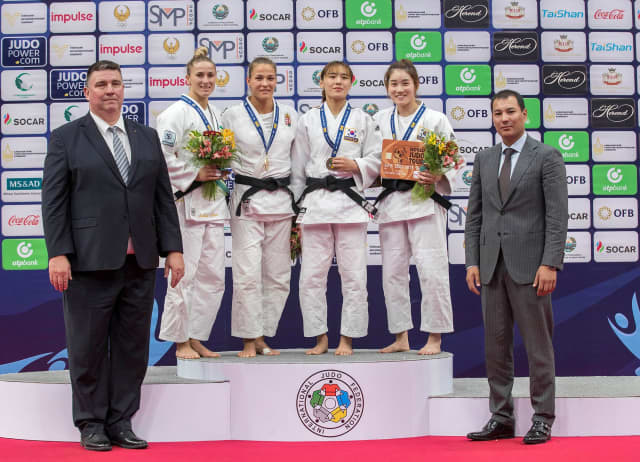 -60kg: Three finals in One for ABULADZE

Already Junior and Cadet World Champion, and son of the illustrious Koga Toshihiko (JPN), triple world champion and Olympic champion, KOGA Genki started his final against the Russian Yago ABULADZE (RUS), with the firm intention to demonstrate that he could be part of the future greats. Despite the intensity put by the two competitors, after the regular time, there was still nothing on the scoreboard, except for a small shido awarded to Koga. But it was definitely from the start of the golden score that the match took on a whole new dimension. 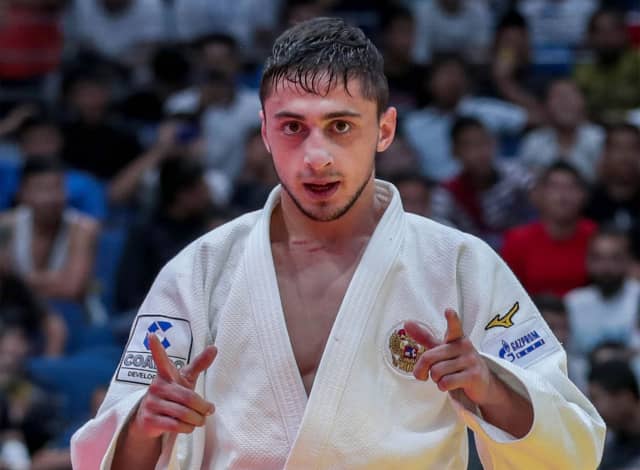 Despite the penalties that were distributed, the intensity of the contest increased crescendo, the two judokas chaining the attacks just as beautiful as the escapes, the beautiful ground session just as striking as the incredible immobilization exits. At the end of the suspense, ABULADZE and KOGA found themselves in a immobilisation position. The question was who was above. Given the impossibility of determining who was controlling the other, the waza-ari was canceled and the final resumed its long course. It was finally close to 8 minutes of golden score, to be added to the first four minutes, making a match of almost 12 minutes, that ABULADZE, totally exhausted countered a last attempt of KOGA to win what will remain as a fight of anthology. Congratulations to the Russian, but such a match is only possible if the commitment of the two athletes is not total, so congratulations also to Koga. 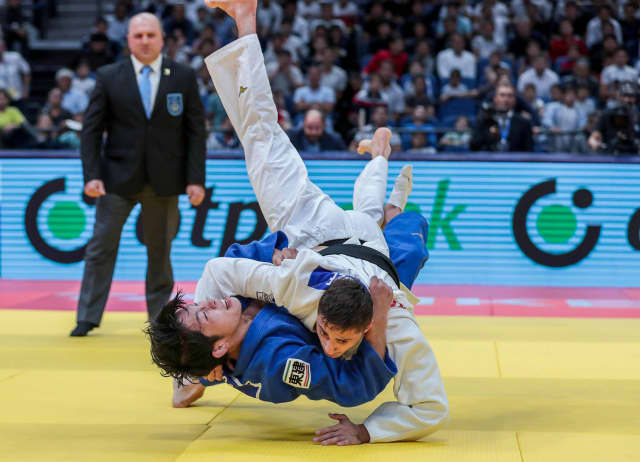 The first match for the bronze medal saw YANG Yung Wei (TPE) and LEE Harim (KOR) facing off. It was in the golden score that the two athletes could finally decide the winner, when LEE was penalized a third time for a false attack offering the fifth medal in grand prix to YANG.

But for the public it was clearly the second match for the bronze medal that was important because the Uzbek Diyorbek UROZBOEV was opposed to the Turkish Mihrac AKKUS. The fight was rough and manily when UROZBOEV, who had just taken control of his opponent's sleeve disappeared to the ground to perform an accurate tai-otocshi that allowed him to score a waza-ari. Keeping control of the sleeve, he chained on an arm lock for Ippon. The public could explode with joy. 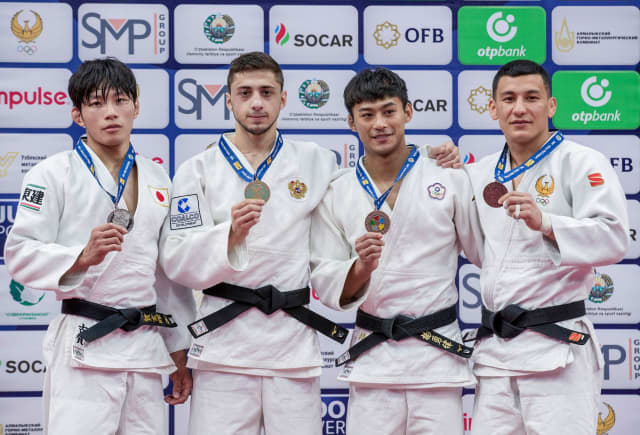 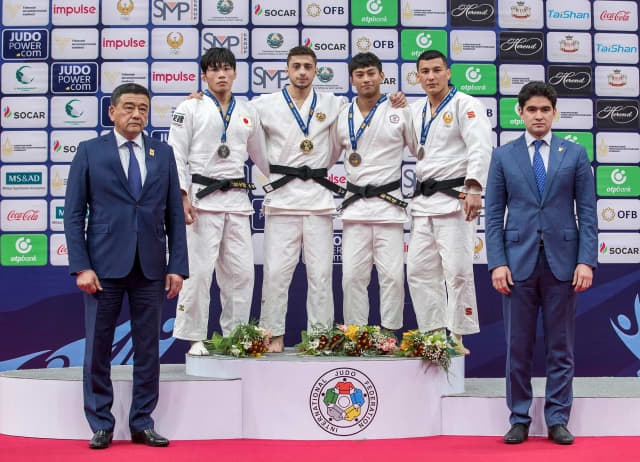 For the second time of the day, a Japanese, AIDA Yuji (JPN), and a Russian, Yakub SHAMILOV (RUS), were opposed in the final of the Grand Prix. First in action, SHAMILOV put at risk AIDA on a lateral move concluded on a yoko-tomoe-nage but did not score. 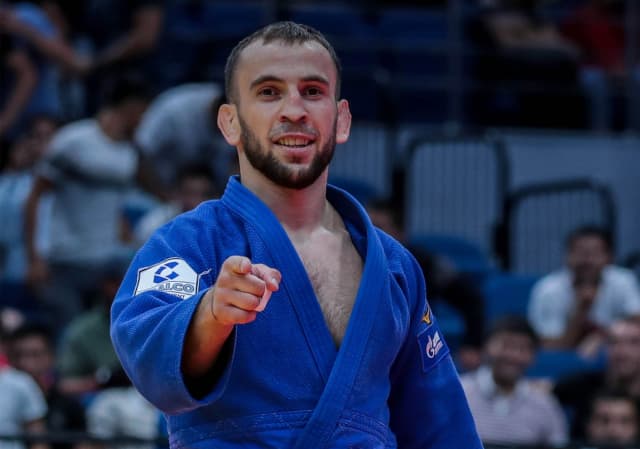 A few seconds later, it is again on a spectacular action of the Russian, that the Japanese drew a sun under the roof of the Humo Arena to be led by a waza-ari. But AIDA came back in action very quickly with a shoulder movement for a waza-ari each. It took an extra acrobatic move from SHAMILOV to determine the winner and once again on this first day of competition, it was the Russian who won against the Japanese. 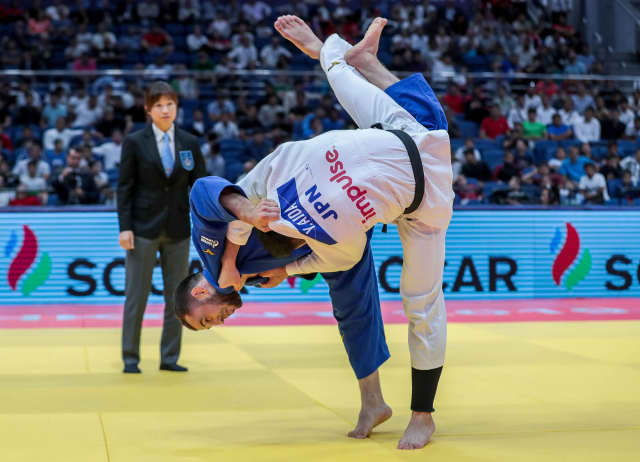 It only took thirty seconds for Mohamed ABDELMAWGOUD (EGY) to conclude a ground session, like the one one learns in all judo schools to win the bronze medal. From a missed drop-seoi-nage attack by Yarin MENAGED (ISR), the Egyptian bypassed his opponent and engaged a shime-waza combined with an arm-lock for Ippon.

For the second bronze medal, once again the arena began to explode when Sardor NURILLAEV (UZB) entered the tatami against Ibrahim ALIYEV (AZE), hoping to win a second medal for the host country. Taking the lead with an inverted shoulder movement, NURILLAEV gave hope to a whole country. The hardest was yet to come, keep this advantage. This is what the Uzbek did with courage, as he even scored a second waza-ari within thirty seconds of the end of the match. And two medals for Uzbekistan. 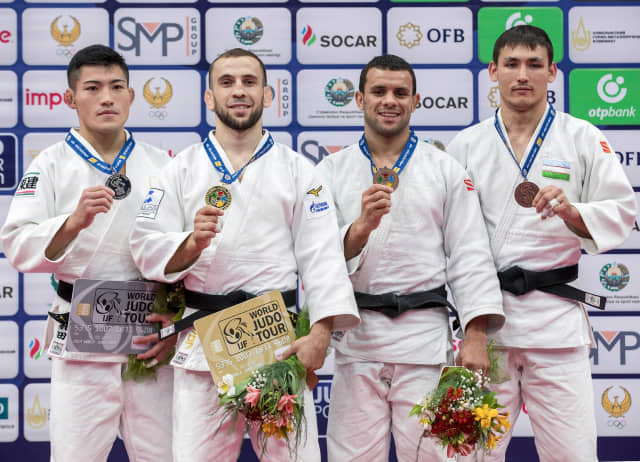 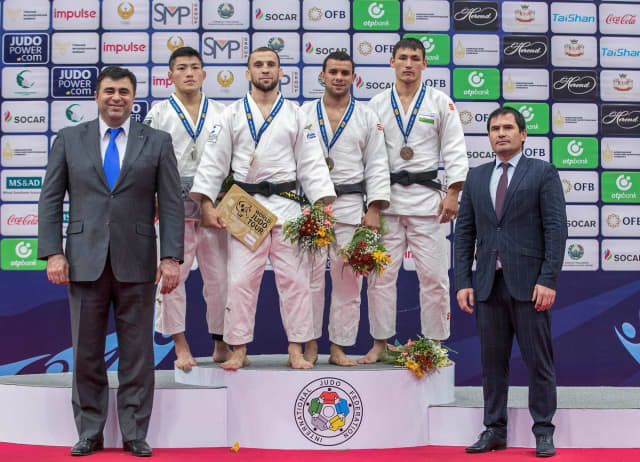