The women’s -63kg and -70kg categories and men’s -73kg and -81kg categories were engaged in Grand Prix action in Qingdao for the final time. Following the ninth Grand Prix of the season the IJF World Judo Tour 2016 will conclude in Japan with the Tokyo Grand Slam next month from 2 – 4 December.

A Grand Prix gold medal is worth 300 world ranking points, silver is valued at 180 points, while bronze earns 120 points. The world ranking list determines which judoka are seeded for IJF World Judo Tour events with the top eight-ranked judoka in each weight category being seeded and ensuring that they will avoid each other in the early rounds. 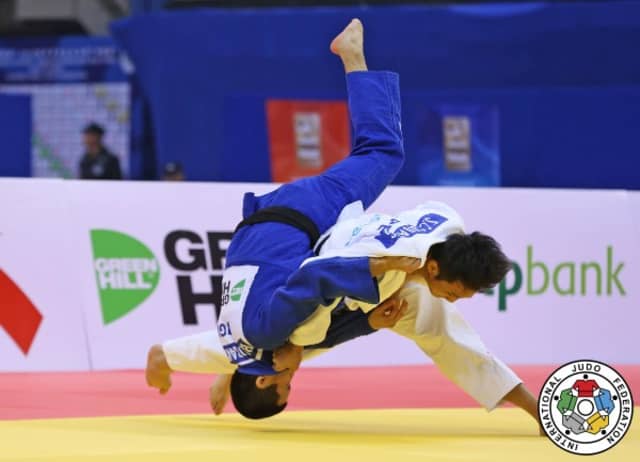 Since the Rio 2016 Olympics Games, the IJF World Judo Tour has created new stars as teams field their most promising young judoka with the World Championships 2017 in Budapest a short-term goal and the Tokyo 2020 Olympics set to see such athletes in their prime.

The four gold medals on day two were won by Japan, South Korea and Russia who won their third gold medal of the tournament to keep them ahead of China with Japan in third place.

The Qingdao Grand Prix 2016 will conclude on Sunday with the heavyweights as the men’s -90kg, -100kg and +100kg categories will feature on the two mats in addition to the women’s -78kg and +78kg categories. World champion and Rio 2016 Olympic bronze medallist YU Song (CHN) has become a Chinese idol after her world and Olympic heroics and will be the fighter to beat on the last day of Grand Prix action of the season.

Budapest Grand Prix winner NABEKURA Nami (JPN) won her second Grand Prix gold medal as she came through her latest test with a glowing display. The Japanese fighter, one of the best prospects in Asia, collided with European u23 Champion Lucy RENSHALL (GBR) in an exciting contest which could become a fascinating rivalry on the senior stage over the coming years. The judoka were led by an all-star coaching cast in London 2012 Olympic bronze medallist UENO Yoshie (JPN) who was coaching the Japanese while Seoul 1988 Olympic bronze medallist Dennis STEWART (GBR) coached the Briton. NABEKURA attacked with conviction as her osoto-gari and ne-waza turnovers looked dangerous but it was her uchi-mata which provided Japan’s first gold medal in Qingdao as she scored a yuko in golden score. 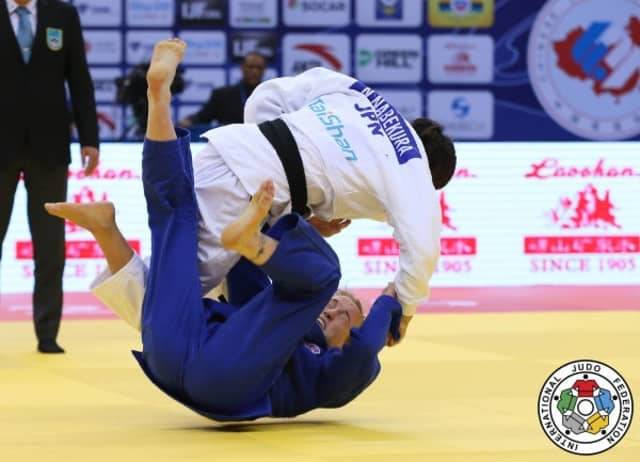 In the first semi-final World Judo Masters bronze medallist YANG Junxia (CHN) was tamed by NABEKURA by a single shido in a scoreless content as the young Japanese judoka showed complete composure and poise. In the second semi-final Orenburg European Cup silver medallist Valentina KOSTENKO (RUS) lost out to the in-form RENSHALL in golden score. RENSHALL, who came through the ranks of SKK Judo Club in St Helens, scored a waza-ari in added time with a strong hip technique to move into the gold medal contest.

The first bronze medal was won by MYUNG Ji-Hye (KOR) who won her first IJF World Judo Tour medal against KOSTENKO. The South Korean fighter opened the scoring with a driving ouchi-gari which earned a waza-ari before KOSTENKO replied with an osoto-combination for a yuko with just 12 seconds left and the Korean held on. The second bronze medal was won by world bronze medallist TSEDEVSUREN Munkhzaya (MGL) who defeated YANG by a yuko from a harai-makikomi which was the only score of the contest. World number 14 TSEDEVSUREN was not at her best as she fought for the first time since Rio 2016 but still had the quality and experience to find a way onto the medal podium. 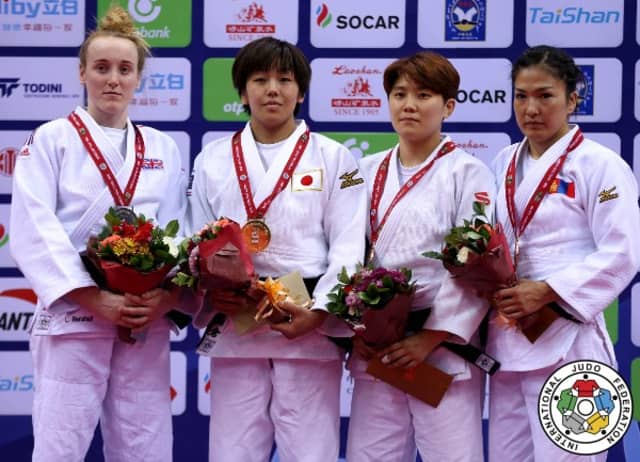 Ulaanbaatar Grand Prix winner IKE Erina (JPN) won her second IJF Grand Prix gold medal with a bold display on day two in Qingdao. IKE, who finished a notable fifth at the Tokyo Grand Slam last year, faced former World Judo Masters winner HWANG Ye-Sul (KOR) in the final as the South Korean standout was fighting for the very first time in 2016. IKE took a commanding lead with a waza-ari as she held down the South Korean for 17 seconds as the latter escaped to keep the contest and her gold medal hopes alive. The Japanese judoka went back to the same technique seconds later and this time there was to be no escape as HWANG was powerless to resist her young opponent. 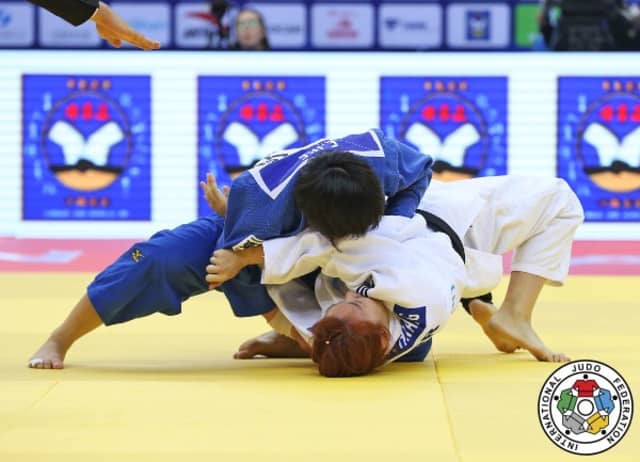 In the first semi-final Abu Dhabi Grand Slam bronze medallist Katie-Jemima YEATS-BROWN (GBR) lost out to HWANG by a yuko which came after 25 seconds with a determined uchi-mata which caught the Brit by surprise. In the second semi-final IKE saw off four-time Grand Prix winner CHEN Fei (CHN) on shido penalties after four scoreless minutes of judo. CHEN was penalised twice while IKE was reprimanded once and the home fighter moved down into one of the two bronze medals contests.

The first bronze medal was claimed by CHEN who bested Tashkent Grand Prix bronze medallist Iana DIBRINA (RUS). The home judoka held down her Russian opponent for 15 seconds with a mune-gatame and the Russian elected to tap out and concede the contest. The second bronze medal was captured by YEATS-BROWN as Russia were again denied a -70kg medal. PROKOPENKO, who was bidding for a first IJF medal, failed with a sode-tsurikomi-goshi and was then thrown for a waza-ari before the former gymnast from Kent pinned down her opponent for 15 seconds. 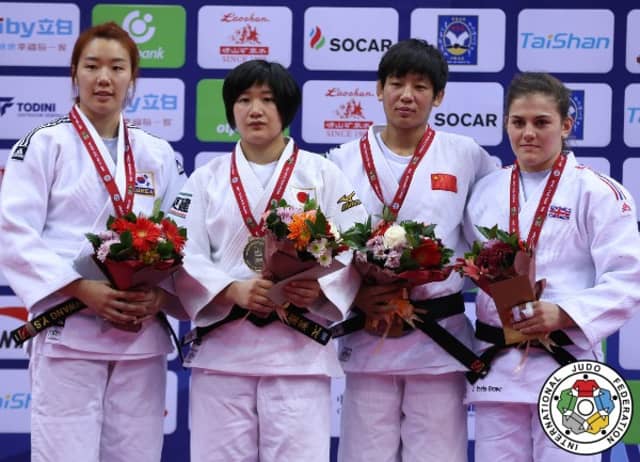 Tashkent Grand Prix bronze medallist Uali KURZHEV (RUS) has pushed himself to the forefront of Ezio GAMBA’S plans after winning his first Grand Slam and Grand Prix titles in the last six months. KURZHEV won his country’s Grand Slam in Tyumen and has now topped the Grand Prix podium after denying Baku Grand Slam bronze medallist SAIYINJIRIGALA (CHN) a home victory. The Russian was penalised after 51 seconds for passivity but produced the first and only score in the gold medal contest with a spinning ko-soto-gake for ippon with 94 seconds remaining. 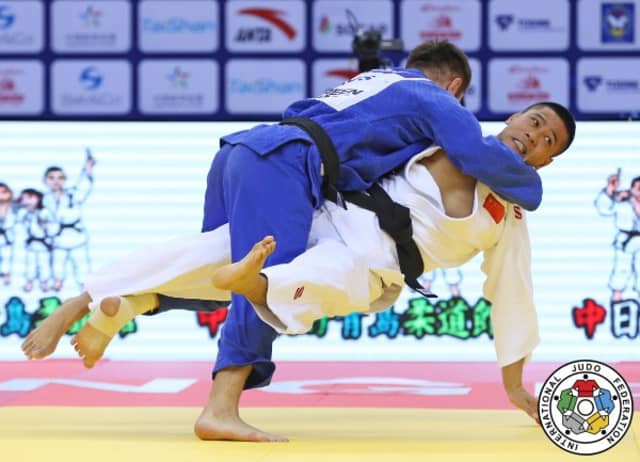 In the first semi-final SAIYINJIRIGALA held down Taipei Asian Open silver medallist CHUANG Shang Chin (TPE) for 15 seconds for his second and match-winning waza-ari. In the second semi-final IJF World Judo Tour tyro TAKEUCHI Nobuyasu (JPN) was thrown by KURZHEV with a ko-soto-gari for ippon after one minute.

The first bronze medal contest saw a straightforward victory for TAKEUCHI against tai-otoshi artist YANG Yifan (CHN). TAKEUCHI scored a yuko with an uchi-mata before adding a waza-ari with a tai-otoshi of his own and the Japanese sealed a fine performance by holding down a well-beaten YANG with a mune-gatame for 15 seconds. The second bronze medal went to former Jeju World Cup silver medallist LEE Young Jun (KOR) who bested CHUANG to win his first IJF Grand Prix medal. LEE fell into the hold down and controlled CHUANG for the full 20 seconds for the maximum score to continue his country’s strong start to the medal action on day two. 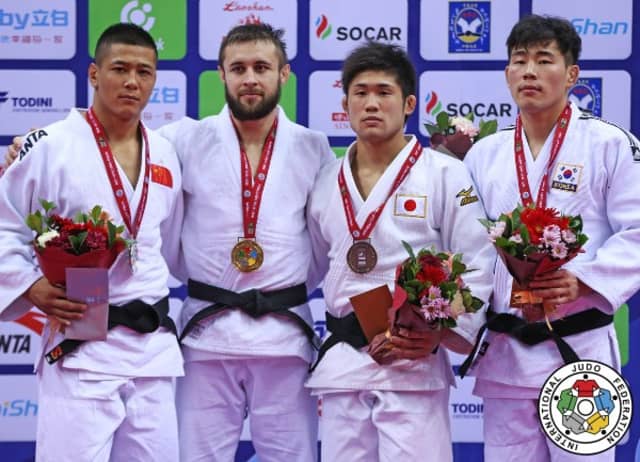 LEE Jaehyung (KOR) was the hero for South Korea as he struck -81kg gold on day two in Qingdao. LEE arrived in China without any senior results but an accomplished record as a teenager including winning the 2010 Youth Olympics Games in Singapore. The South Korean beat Rio 2016 Olympic champion Khasan KHALMURZAEV (RUS) to win the YOG title while future world silver medallist TOTH Krisztian (HUN) joined them on the podium as a bronze medallist. LEE faced two-time Grand Prix bronze medallist and -81kg newcomer Nick DELPOPOLO (USA) in the final today and took the contest to the American. A ko-uchi-gari from LEE scored a waza-ari and both judoka collected shidos as the tactically astute Asian fighter won his first IJF World Judo Tour final and will be one to look out for in this new Olympic cycle. 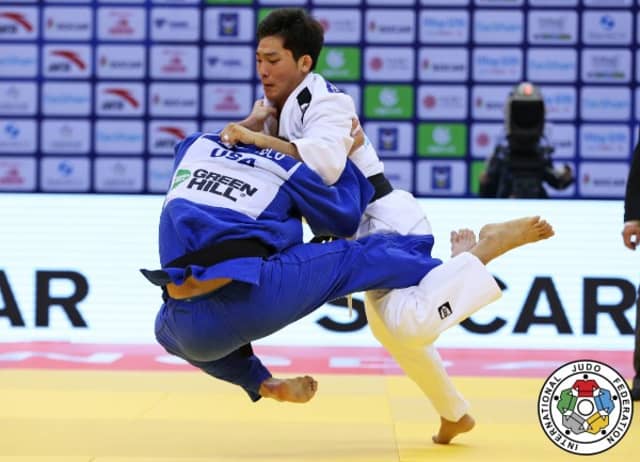 In the first semi-final Ulaanbaatar Grand Prix winner NYAMSUREN Dagvasuren (MGL) surprisingly fell to 23-year-old LEE by a yuko score as the top seed was stopped in his pursuit of gold and turned his attention to bronze. In the second semi-final 21-year-old former Junior European Cup winner Elemer SZOCS (ROU) was beaten by DELPOPOLO by a yuko after 20 seconds of golden score.

The first bronze medal was won by German European Cup bronze medallist Etienne BRIAND (CAN) as he saw off SZOCS on shido penalties 1:2. The second bronze medal was won by top seed NYAMSUREN who salvaged a medal for his country despite failing to invigorate the category as many expected. The Mongolian narrowly defeated 18-year-old rookie SU Rilige (CHN) by a yuko and held on after being under a torrent of pressure in the closing minute. 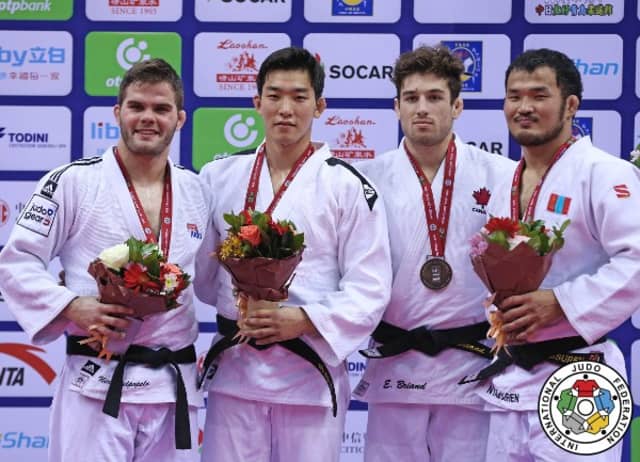 News
Judo is Back in China