Written by Pedro Lasuen on 27. Nov 2021
Photographs by Gabriela Sabau, Emanuele Di Feliciantonio
Share
Some bloom in the autumn. They like the cold and the aroma of the end of the year. Lucy Renshall (GBR) is one of those. Others appear in the important moments, those that count to fatten a record of services by collecting prey of big game. Tsogtbaatar Tsend-Ochir (MGL) is their best exponent. There are also those with pending accounts and the need to settle them. This is the case of Matthias Casse (BEL). And, almost always, there are some Japanese who do what they want. If we take all of this and shake it up we get a nice judo cocktail on the second day of the Abu Dhabi Grand Slam; shaken, not stirred. 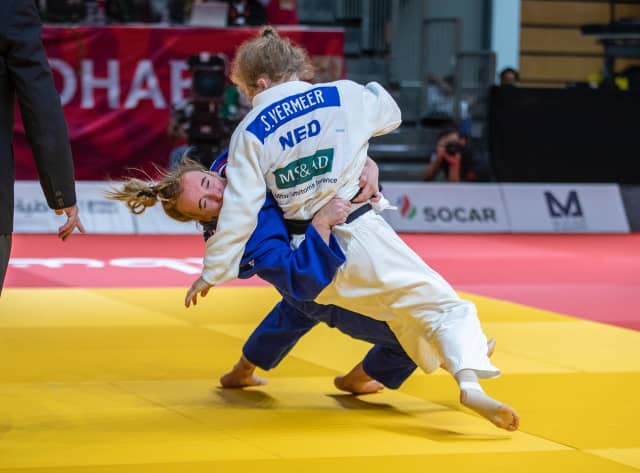 Not everyone has had a bad time in 2021. Lucy Renshall, for example, has used the year to do more than just confine herself to home. The British athlete started the year quietly and as time passed her performance improved until it reached its peak. Gold in Antalya, silver in Paris and again gold in Baku; it is clear that this is her year. In Abu Dhabi she had a final that was announced as bittersweet against a strong opponent, but she came from home with tonnes of sugar. In front of her was Sanne Vermeer, three years younger and also with an excellent year behind her, but where Renshall oscillates between gold and silver, the Dutch competitor has not passed bronze in 2021. 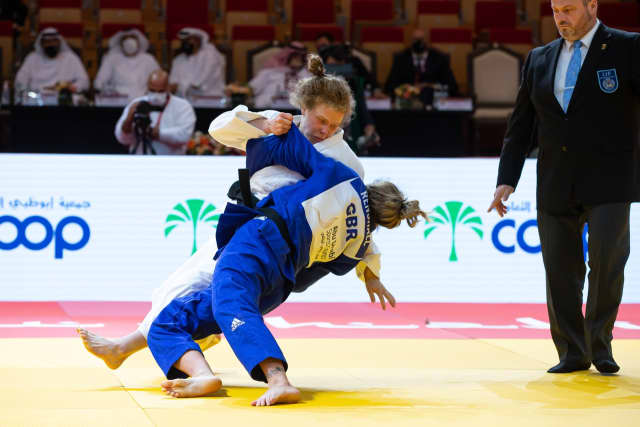 Vermeer scored waza-ari, looking fresher and with a well-established plan. Renshall was trying the uchi-mata but her attacks were predictable until she changed and surprised Vermeer with ko-soto-gake. 1-1 and golden score, the third in a row of the day. Renshall finished off with seoi-nage and won another autumn title. Vermeer changed the colour of her medal but it is not gold yet.

“I’ve got confidence after getting medals in Paris and then Baku. This is the last event of the year and I had to do well. I was tired today but I pushed through,” Renshall declared. 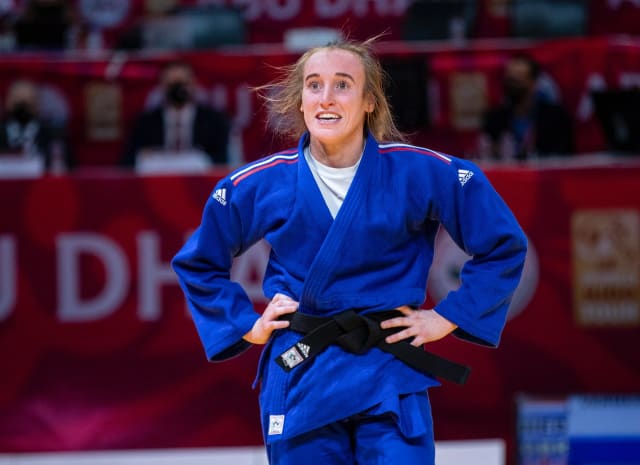 In the battle for the first bronze, Australian Katharina Haecker surprised the world by winning gold in Tel Aviv a year ago but needed something more to defeat Slovenian Andreja Leski, first seed in Abu Dhabi and who had already surpassed Haecker in their three previous matches. Haecker took the initiative and her right hand commanded the kumi-kata. They reached golden score, already with two shido. Haecker applied the osoto-gari but Leski's reaction was brutal with an explosive seoi-nage. Bronze and 4 wins to 0 for Leski.

The second bronze was the classic opposition between past and future: 34 year old Brazilian Ketleyn Quadros versus 21 year old Czech Renata Zachova. There was also a golden score period, which favoured the younger judoka, although the initiative belonged to the Brazilian. With two shido against the Czech she had to be careful because Quadros used her experience to accumulate attacks and provoke a third shido against Zachova. That's what happened, the bronze for Quadros and a lesson in managing a medal match for Zachova. 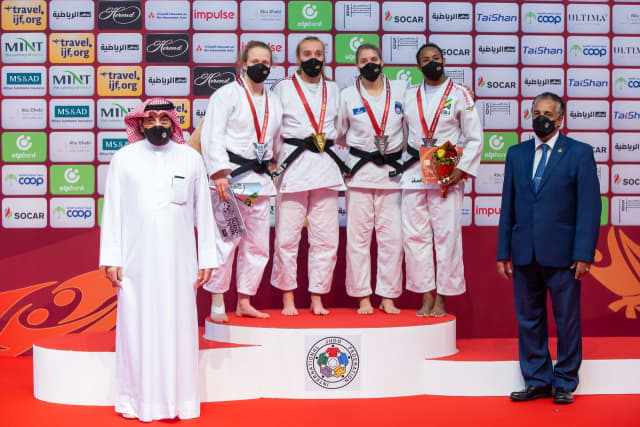 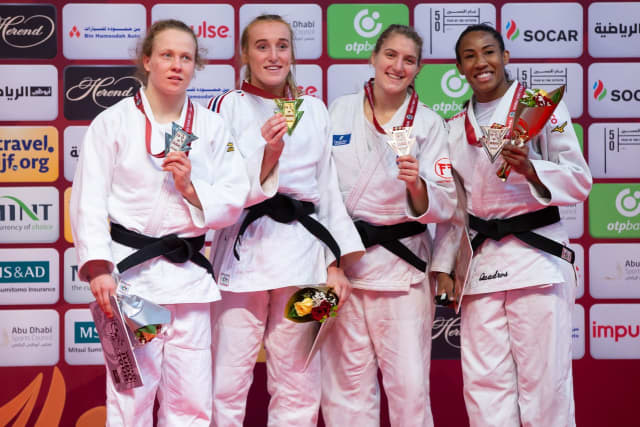 Lasha Shavdatuashvili doesn't need a business card, but for those who live in another galaxy, suffice it to say that the Georgian is current world champion, Olympic runner-up and has won it all. With those credentials he performed in Abu Dhabi and reached the semi-finals, which is logical. There was nothing more because he lost against the Uzbek Khikmatillokh Turaev, a rock who saw the opportunity to include a new notch in his rifle and not just because Shavdatuashvili loses few times. Turaev illustrated what a tournament of this level really means because after eliminating a living legend, he had to face in the final a man who is on his way to becoming one of the greatest. Tsend-Ochir was second in the world rankings, with bronze at the Tokyo Games and is a multi-medallist in 2021, including two golds, from Tashkent and Tbilisi. He still does not reach the dimension of Shavdatuashvili but he is getting closer. 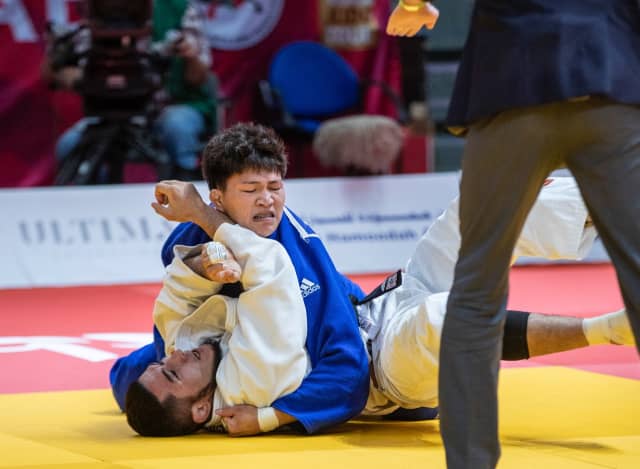 With the Georgian out of the final, it remained to be seen if Turaev could surpass the new Mongolian sensation. Tsend-Ochir is very agile, very fast and has learned to bide his time like a veteran hardened in a thousand battles. He first launched with ura-nage for waza-ari and a few seconds later he concluded via osaekomi. Tsend-Ochir has become a complete judoka and yes, he is doing much more than approaching the top because from now on he is the new world number one.

“I am very happy to participate in the last edition of 2021 IJF Grand Slam Abu Dhabi. I made it a goal after the Olympic Games to win the gold in Abu Dhabi. My IJF ranking is number one now and I would like to dedicate this achievement to my family, especially my new born baby. Thank you very much to all IJF members and staff and to all judo fans around the world,” were his first words. 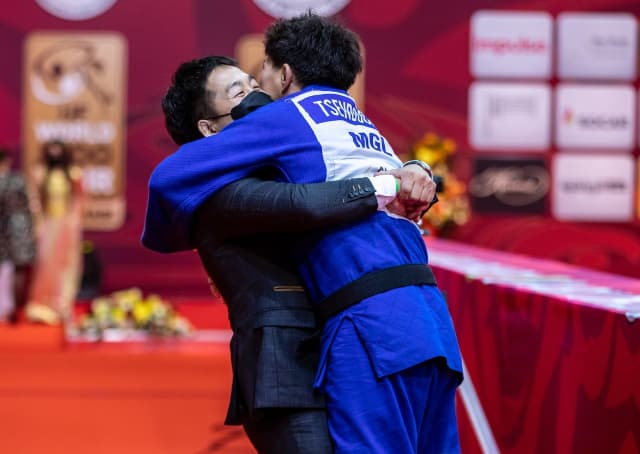 Shavdatuashvili won the second bronze. After an exhausting day with all his bouts decided in golden score, his fight against Slovenian Martin Hojak was anything but a mere formality. Another golden score but bronze at the end of a very long road. 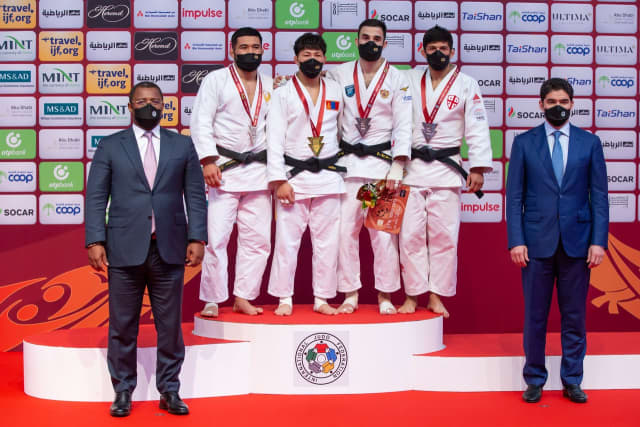 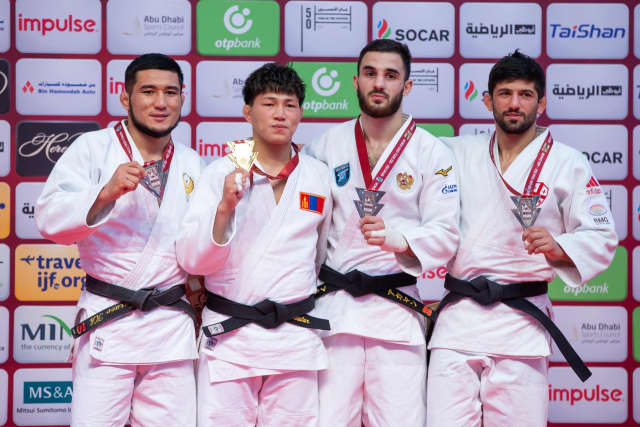 -70kg The Absent Are Always Wrong

Giovanna Scoccimarro belongs to the cream of a category dominated with an iron fist by the Croatian Barbara Matic, two Japanese and two Dutch. In Abu Dhabi Scoccimarro was very happy because the others were not there. In fact, the German reached the final but there was an unknown Japanese woman, at least for the moment, who comes out of the junior universe and who, like all Japanese, was a favourite despite her youth and anonymity. This is what happens when judo is practised in Japan. 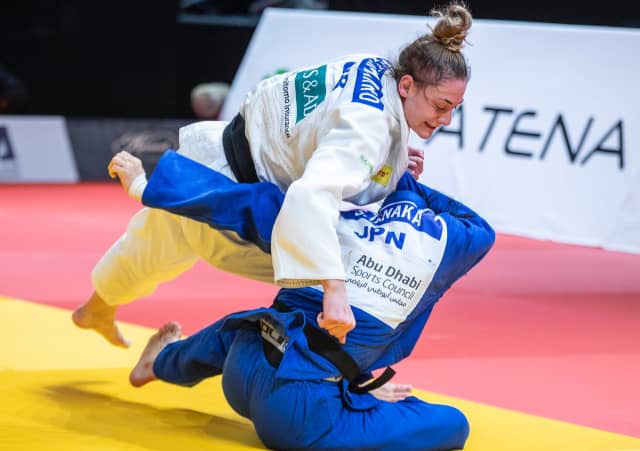 That's how things began in the final, a very tactical encounter with both trying to throw with uchi-mata. In golden score, because of course there was one, the German executed a strong ko-uchi-gari and capitalised on her trip to Abu Dhabi, showing that the Japanese are not invincible. 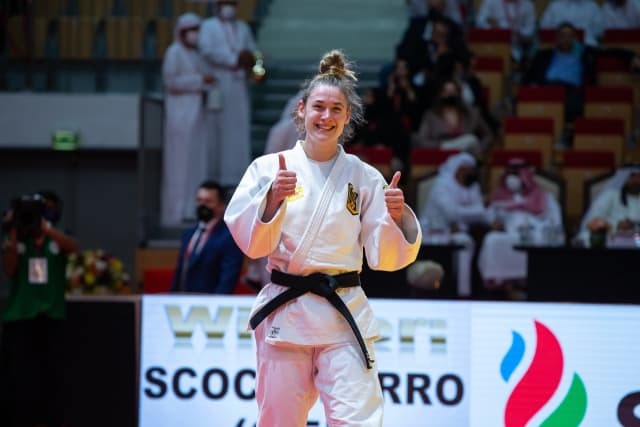 Marie-Eve Gahié has not enjoyed this year. She lost the world title and was not selected for the Olympics, as if she had been forgotten. Her results suffered, so Abu Dhabi was an opportunity to relaunch a race from a standstill. The French did it by winning bronze against the Russian Taisia Kireeva and she did an excellent job in ne-waza. Osae-komi brought the bronze and the first smile of the year.

The other bronze medal travelled to Great Britain on what was an excellent day for Her Majesty's subjects. It was a tough match between the Mongolian Enkhchimeg Tserendulam and the British Kelly Petersen-Pollard but how could it be otherwise in Abu Dhabi? It ended in golden score with hansoku-make against Tserendulam. 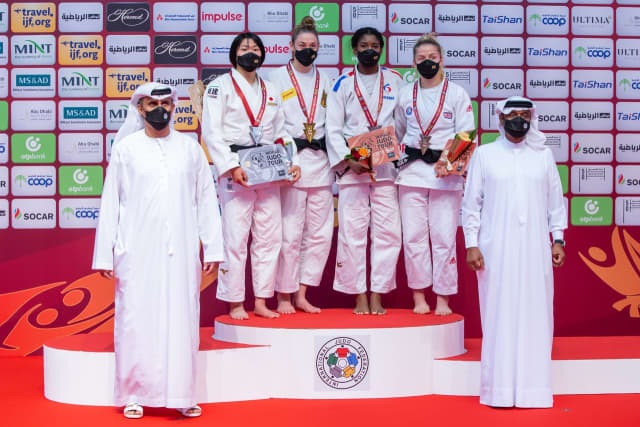 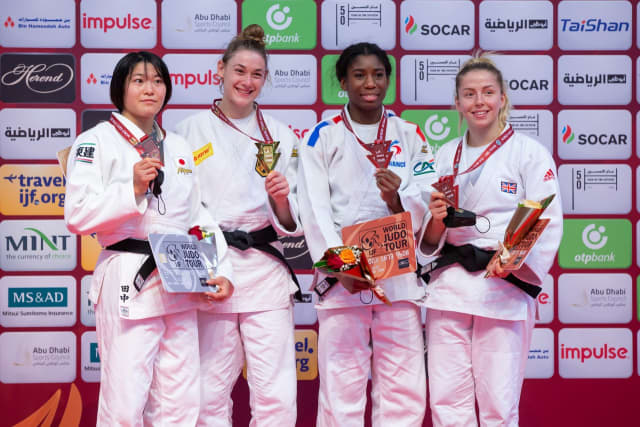 Belgian Matthias Casse is a world champion and an Olympic bronze medallist. Everything's fine. However, since then he has not quite regained his form, at least for the moment. That was his unfinished business. In Abu Dhabi he did everything right and reached the final after a tense semi-final against Russia's Aslan Lappinagov. Casse had a double serving of Russians because in the final there was another, Alan Khubetsov. 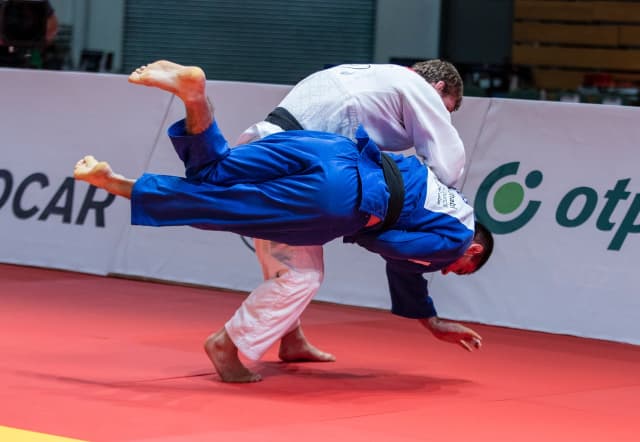 The Belgian tried five different techniques, showing variety and trying to surprise. The Russian had prepared a plan and did not want to change strategy. Already in the golden score the Belgian sentenced with a beautiful uchi-mata-sukeshi. Casse has come back in style! 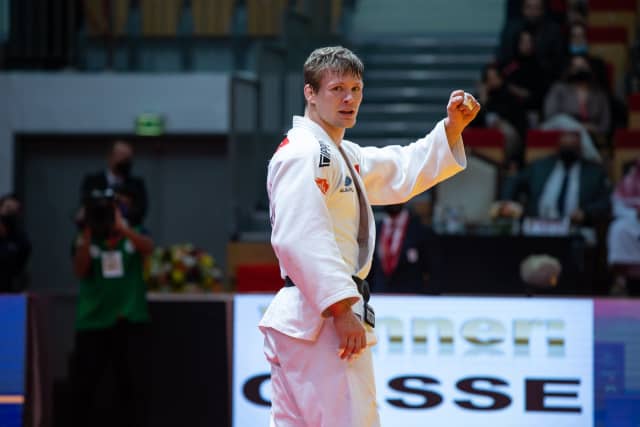 In any sport, a confrontation between a Brit and a German has its interest in the historical rivalry between the two countries. Lachlan Moorhead and Tim Gramkow fought for bronze and confirmed that both delegations are in Abu Dhabi to win medals, not just to feature. The British judoka Moorhead won with two consecutive seoi-nage and incidentally, avoided golden score and that was appreciated on a busy day.

It was then the turn of the Russian Aslan Lappinagov and the Uzbek Arslonsek Tojiev, members of two other strong delegations here in Abu Dhabi. The last bronze went to Lappinagov after a flat contest.

Thus ended a day in which a couple of countries won medals two by two, as if they did not like to distribute. It was a good judo day. For the third and last, if we had to make a wish, it would be, if possible, to have less golden score contests. 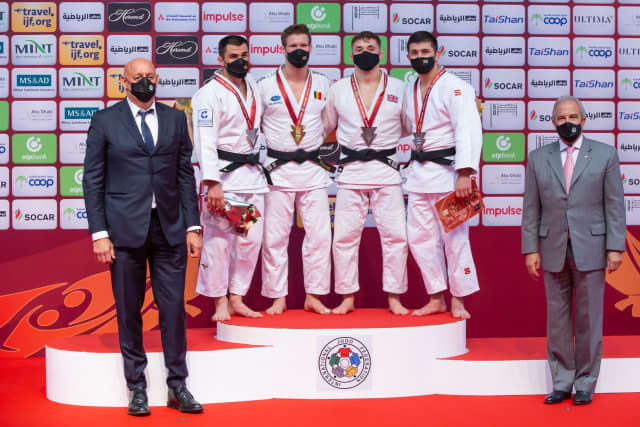 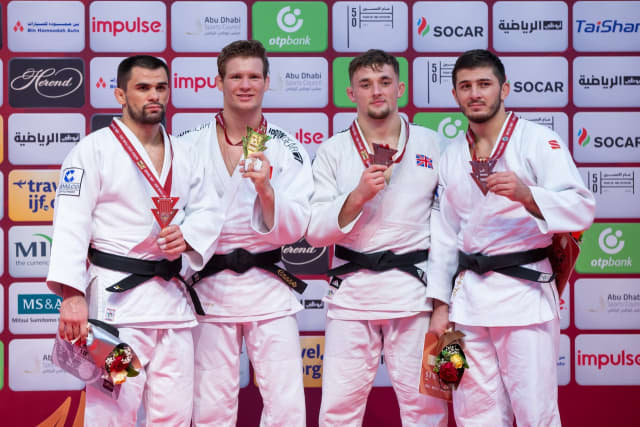