Written by Nicolas Messner on 09. Nov 2018
Share
The first five weight categories of the 2018 edition of the Tashkent Grand Prix were in action today in Uzbekistan. Find below all the results and report of each category. Stay tuned for more information and analysis of this first day.

-48kg: KRASNIQI Opens the Prom for Kosovo The first final saw the first Kosovo athlete of the day to enter the final, Distria KRASNIQI, against the former Olympic bronze medallist, CSERNOVICZKI Eva (HUN). After one minute three shidos were already awarded, two for CSERNOVICZKI, one for KRASNIQI. This is the time the pupil of Driton KUKA, decided to score a first waza-ari with a o-uchi-gari. Totally dominating her opponent, KRASNIQI didn't seem in danger at all and kept putting pressure on her opponent, until the Hungarian was penalized with a third shido offering the first gold medal of the day to Kosovo. 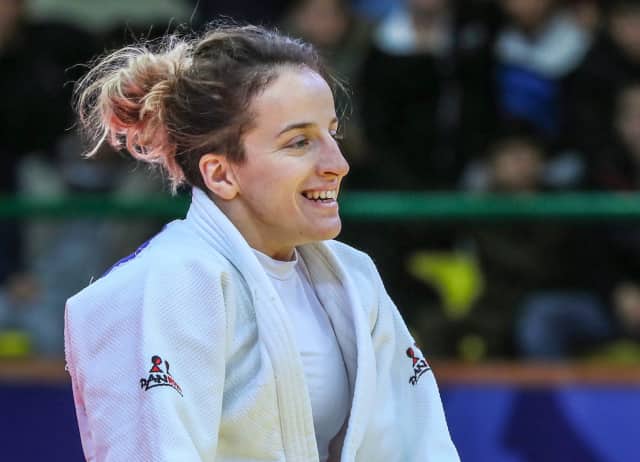 The first bronze medal contest opposed Katharina MENZ (GER) and Milica NIKOLIC (SRB). After less than thirty seconds NIKOLIC threw MENZ with a shoulder technique for waza-ari, immediately followed with an immobilisation for ippon. In the second bronze medal contest the right-handed Joana DIOGO (POR) was opposed to the left-handed Amber GERSJES (NED). Half way to the end, the latter was penalized with a first shido for a false gripping but a few seconds later it was DIOGO to be penalized for passivity, just before a second penalty was awarded to both athletes for avoiding gripping. It was time for the golden score and only after a few seconds, DIOGO launched a ippon-ko-uchi-gari for a small waza-ari, but enough to win her first bronze medal in a Grand Prix. 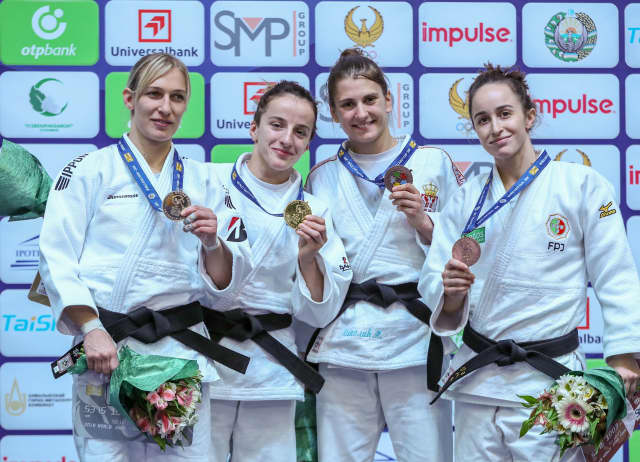 -60kg: GANBAT Ends the Hopes of UROZBOEV As the heat and the sound level in the venue increased, one could feel that the final opposed the pocket-size Mongol GANBAT Boldbaatar and the local hero Diyorbek UROZBOEV. Warmly supported by his public, UROZBOEV seemed to be in total control of the situation and launched a powerful ko-uchi-gari. But GANBAT perfectly anticipated the action and countered with a simple but effective te-waza (arm technique) to score ippon. Suddenly the venue went totally silent, before congratulating both athletes for their today's performance. 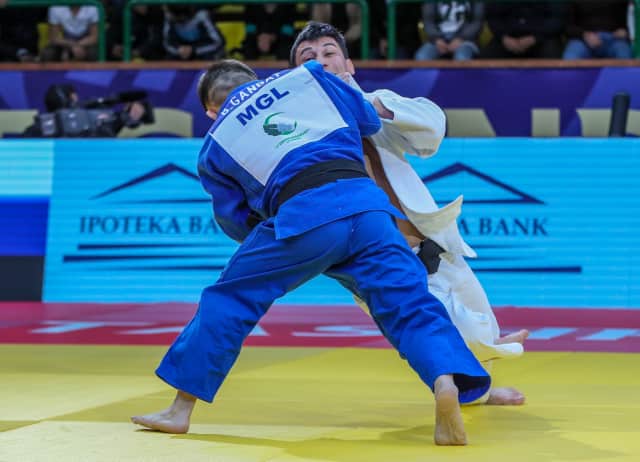 Moritz PLAFKY (GER) and Luka MKHEIDZE (FRA) were opposed in the first male bronze medal contest of the day. Working with the end of the sleeves, the French was bothering his opponent, who couldn't really apply any technique and was penalized for passivity after half of the bout. But while MKHEIDZE was also dangerous with his counterattacks, it was the German who first countered to score a first waza-ari and take the lead. Surprisingly, MKHEIDZE didn't seem too bothered that he was one waza-ari behind. But actually when the final gong echoed in the venue, he realized that the bronze medal just escaped from him. 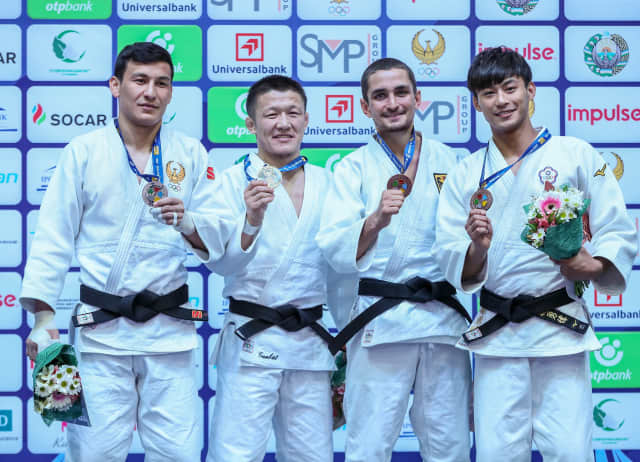 -52kg: KELMENDI is Back on Top With no real surprise, Olympic champion, Majlinda Kelmendi (KOS) was present in the final for the second event in a row after Abu Dhabi Grand Slam two weeks ago. She was opposed to top seed athlete, Evelyne TSCHOPP (SUI). Obviously, both competitors perfectly know each other as Kelmendi was trying to impose her powerful left arm over TSCHOPP's shoulder, and the Swiss was trying everything to avoid it. But as the Kosovar was not able to pass over the head, she went under the arm... for the same result, a beautiful koshi-waza technique for a beautiful ippon. Kelmendi is back on top of the podium. 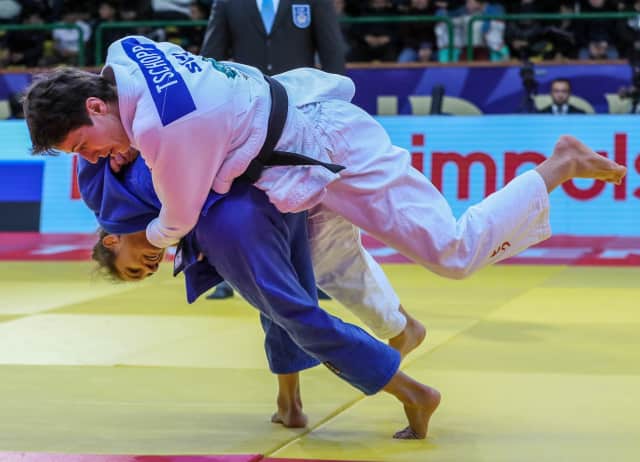 In the first bronze medal contest, Betina TEMELKOVA of Israel was opposed to Ana PEREZ BOX of Spain. TEMELKOVA scored a beautiful first waza-ari with an action-reaction technique that she immediately followed on the floor with an immobilization. The match seemed to be done, but Ana PEREZ managed to escape and turn the situation to her advantage to catch the Israeli with an immobilisation of her own and score ippon.

For the second bronze medal, the 2018 Antalya Grand Prix bronze medallist, PUPP Reka (HUN) faced the 2018 Cancun Grand Prix silver medallist, Agata PERENC (POL). PUPP was penalized with a first shido for passivity after one minute and thirty seconds. Entering the last minute, the Polish scored a beautiful first waza-ari to take the lead and gently control the end of the match to take the bronze medal back home. 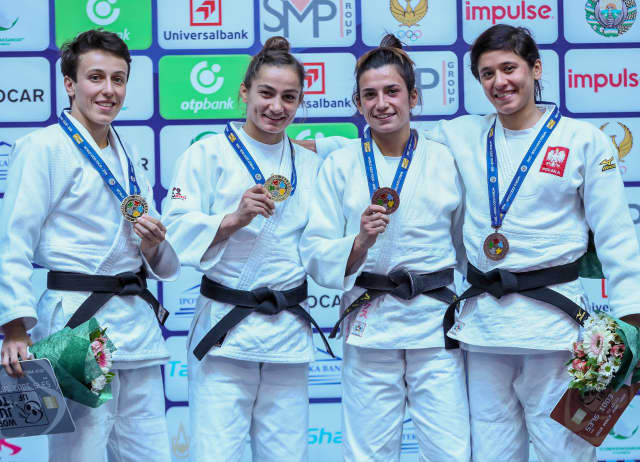 -66kg: GOMBOC Takes Gold In Tashkent Fort the last male category of the day, Uzbekistan had one more chance to win the gold as Sardor NURILLAEV (UZB) was opposed to Adrian GOMBOC (SLO). After a minute of observation, the first strong attack came from NURILLAEV, with a drop-seoi-nage, which made the public immediately react, but for no score. A minute later, the Uzbek again launched a powerful uchi-mata, but for the same result... nothing to be written on the scoreboard, but enough for GOMBOC to be penalized with a first shido for passivity. As the last minute started, with a strong arm technique, the Slovenian scored a waza-ari to win the gold medal. 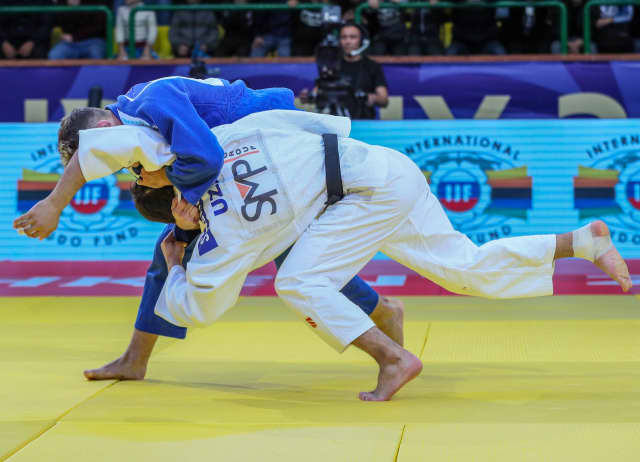 With the first bronze medal contest, Shakhram AKHADOV was in the position to offer a third medal to the host country on day one of the Grand Prix in Tashkent as he was opposed to Ismail CHASYGOV (RUS). But halfway to the end, he had already been penalized twice for passivity, being condemned to score. But as the match was getting close to an ending, the Russian was also penalized twice for false attacks. The golden score was to decide between the two competitors. Everything was still possible. The public could feel that their competitor needed support and they offered it to him. AKHADOV multiplied the attacks to force CHASYGOV to be logically penalized for the third time.

The second bronze medal contest opposed DOVDON Altansukh (MGL) and Nijat SHIKHALIZADA (AZE). Despite being very close to scoring, DOVDON, was always behind in terms of attacks and therefore was penalized twice as both athletes reached the end of the bout. Once again the golden score would decide the winner and it took only five seconds for SHIKHALIZADA to score a superb ippon to end up with the bronze medal. 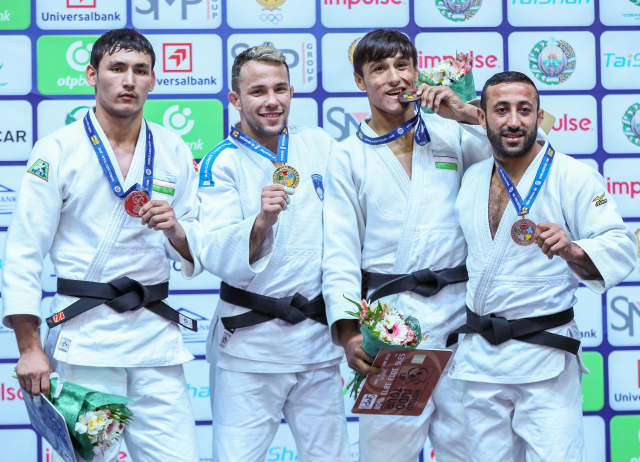 -57kg: STOLL Turns Down Kosovo's Plan The last final of the day saw, the winner of the Abu Dhabi Grand Slam, Nora GJAKOVA (KOS) facing Theresa STOLL (GER) for a possible hat-trick for Kosovo on the occasion of this first day of competition in Tashkent. After 50 seconds, both athletes were penalized with a first shido for avoiding to fight. But as the final was going on, and knowing that the power of team Kosovo is one of its strengths, it was clear that the German was not afraid of facing GJAKOVA. And she actually was able to throw GJAKOVA twice, first with a waza-ari on a counter-attack, then for ippon with a o-soto-gari almost at the end of the match. 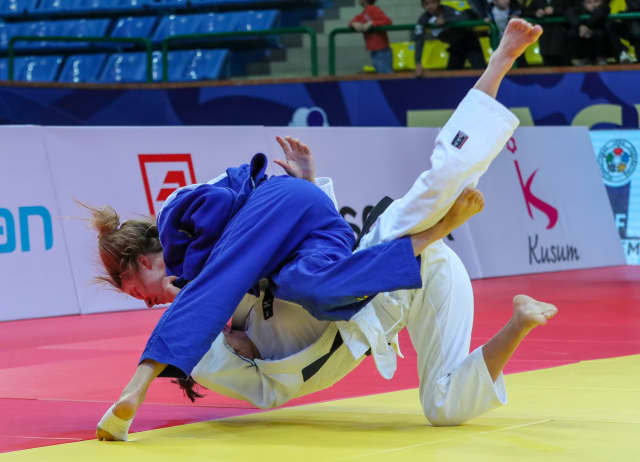 The first bronze medal contest opposed Amelie STOLL (GER) and Anna BOROWSKA (POL). After almost four minutes of a well balanced contest, the victory went to the German as the Polish was penalized for the third time for keeping the grip too long on the same side.

In the second bronze medal contest, Sanne VERHAGEN (NED) faced Kaja KAJZER (SLO). From the first hajime, the Dutch seemed to be under the pressure of KAJZER, but the latter couldn't find an opportunity to score. This was done, as just before the last minute, the Slovenian countered VERHAGEN for a waza-ari. As she was controlling the rest of the match, she was penalized once, but not enough for VERHAGEN to come back and win bronze. This is the second medal of the day for Slovenia. 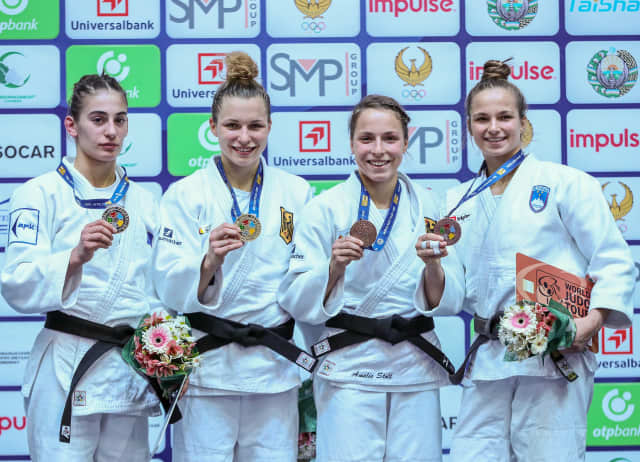