Written by Nicolas Messner on 10. Nov 2018
Share
Four weight categories were in action on day 2 of the 2018 edition of the Tashkent Grand Prix, in Uzbekistan (W-63kg and -70kg and M-73kg and -81kg). Find below all the results and report of each category. Stay tuned for more information and analysis of this second day. 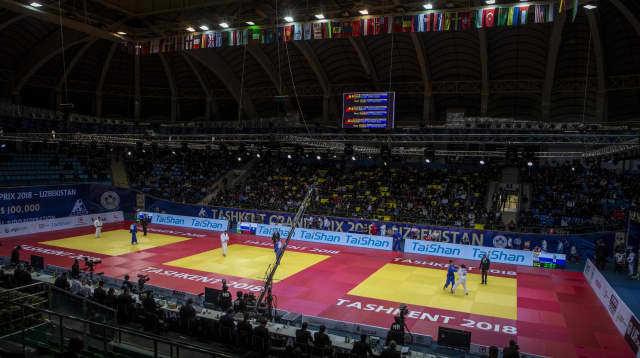 OPENING CEREMONY The official opening ceremony of the 2018 Tashkent Grand Prix in Uzbekistan took place today just before the final block on day two, in the presence of Mr. Nabiev Dilmurov Minister of Sports of Uzbekistan and Mr. Jasur MADTCHANOV General Secretary of National Olympic Committee of Uzbekistan, as the IJF was represented by Mr. Vladimir Barta, IJF Head Sport Director.

After a colorful show performed by traditional dancers and the presentation of the 47 participating countries, the guests of honor proceeded to the official opening of the competition.

Mr. Jasur MADTCHANOV declared: “Good afternoon dear athletes, coaches and guests. Welcome to Tashkent. Our country is happy to welcome again one of the biggest event in the world. 348 athletes from 47 countries are present in our city. This event is giving qualification to the Olympic Games. Judo is a mass sport in Uzbekistan and very popular. This event shows the importance of judo in our country. I wish all the best to all athletes and let the best win.“

Vladimir Barta declared: “In the name of the International Judo Federation and its President, Mr. Marius Vizer, it is my great pleasure and honor to be with you today. Uzbekistan is a country of judo. You already proved it on many occasions on the World Judo Tour, at the World Championships, and at the Olympic Games. But the Uzbek Judo Federation is also a great organizer of judo events. This 6th Tashkent Grand Prix is the proof of this capacity to hold worldwide judo competitions. Congratulations to the Uzbek Judo Federation and its team and good luck to all participants.“

Mr. Nabiev Dilmurov declared: “Good afternoon ladies and Gentleman. Today Tashkent is the judo world capital. I want to remind that this tournament is being held in Tashkent for the 6th time, so we can call it a tradition. Uzbekistan team is including top level athletes. We have competitors from all the regions of Uzbekistan as part of the team and it is an important competition as it gives points to go to the Olympic Games. Judo is a very popular sport in our country and has been providing medals for many years at a worldwide level. I declare the Tashkent Grand Prix officially open.“ 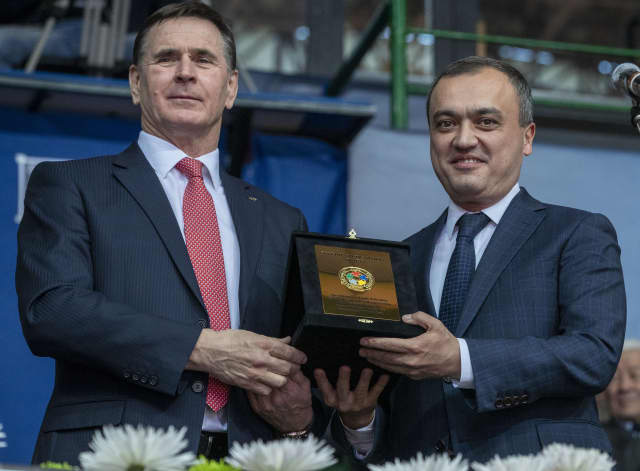 At the end of the Opening Ceremony, Mr. Vladimir Barta presented the IJF plaquette to the Minister of Sports of Uzbekistan.

-63kg: BALDORJ Dominates the category for Mongolia With her best result in 2018 being a seventh place at the Paris Grand Slam, BALDORJ Mungunchimeg (MGL) today achieved her best performance of the season. In the final she was opposed to another outsider Maria CENTRACCHIO (ITA), who finished with bronze at the Glasgow European Open 2018. After a little more than one minute, BALDORJ who seems to be really confident, launched a combination eri-seoi-nage/o-soto-gari for a clear ippon that did not leave any chance to CENTRACCHIO to escape. 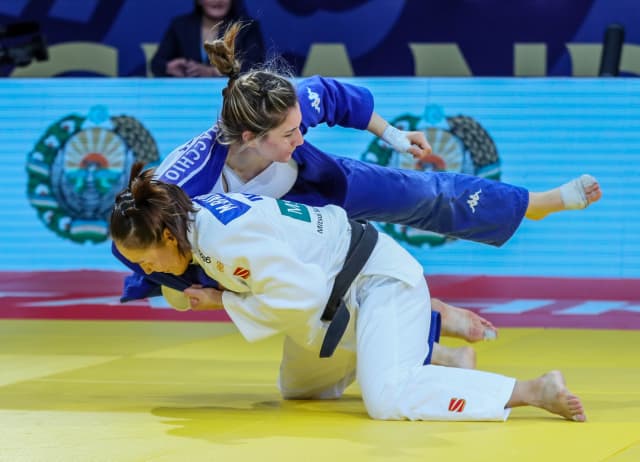 The first bronze medal contest saw the winner of last year Tashkent Grand Prix, Kathrin UNTERWURZACHER (AUT) and Kathrin DAVYDOVA (RUS) opposed to a place on the podium. The first to attack was UNTERWURZACHER with a spectacular yoko-sutemi-waza technique but for no score. DAVYDOVA could be on her guard. Being less active than her opponent, the Russian was penalized with a first shido and avoided a second penalty with an attack that came at the right time but for no score. With a handful of seconds left on the scoreboard, UNTERWURZACHER was close to being caught on the floor after a sumi-gaeshi that was lacking control, but she could keep DAVYDOVA's leg to wait until the end of regular time. In the golden score, the Russian had no other choice than attacking, which she did with a ko-uchi-gari, which was countered by the Austrian with a ko-uchi of her own to win the bronze.

In the second bronze medal contest Cristina CABANA PEREZ (ESP) faced top seed athlete of the day Andreja LESKI (SLO), who was not able to reproduce her Abu Dhabi performance where she reached the final of the Grand Slam, two weeks ago. After thirty seconds, LESKI was the first in action with a uchi-mata for wasa-ari. CABANA PEREZ was then penalized for passivity. Just before entering the last minute, the Spaniard was penalized again for being too passive. It is not the last shoulder movement attempt from CABANA PEREZ which changed the final result and Andreja LESKI could win her sixth medal at a Grand Prix and the third of the Slovenian delegation. 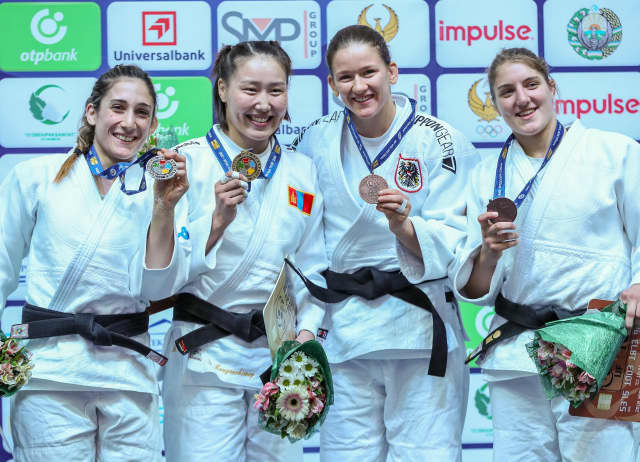 -73kg: TURAEV Delivers at Home After having eliminated top seed athlete Tommy MACIAS (SWE) in the third round, Khikmatillokh TURAEV (UZB), strongly supported by the audience, entered the final against Igor WANDTKE (GER). The public was already chanting, way before the two athletes entered the arena as TURAEV could be the first gold medal for the host country. At each attack, the sound level was dramatically increasing. After a little bit more than two minutes, WANDTKE received a first shido as he was avoiding TURAEV. The successive attacks of the Uzbek started to sap WANDTKE's defense. But after an intense match, nothing was scored and it was time for golden score. After 19 seconds the German was penalized a second time for grabbing the leg. Now both athletes were totally exhausted and TURAEV received a first penalty after having stepped outside of the mat. They were reaching the third minute of extra time, when after a sequence of several attacks by the Uzbek, WANDTKE was penalized a third time and Khikmatillokh TURAEV could finally enjoy winning the first gold medal for Uzbekistan here in Tashkent. 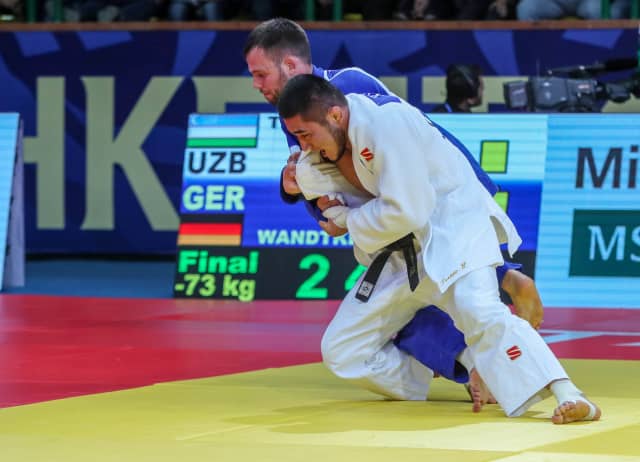 The first bronze medal contest opposed the Frenchman Benjamin AXUS, who so far only had one bronze medal at the Ekaterinburg Grand Slam in 2017, and the Russian Oleg BABGOEV, who had no record on the World Judo Tour so far. After a little more than one minute, both athletes were penalized with a first shido for blocking the opponent. Then the French received a second penalty for passivity. With less than two minutes before the end, AXUS started to be a little more active and it was BABGOEV's turn to receive a second shido. It was time for golden score. A strange rhythm prevailed at the beginning of the extra time, but it is during what looked like a simple ne-waza session, that BABGOEV took the advantage to immobilize his opponent for ippon.

For the second place on the podium the two contenders were Georgios AZOIDIS (GRE), winner of the recent Aktau Asian Open 2018, and the 2014 World bronze medallist Victor SCVORTOV (UAE). After one minute, AZOIDIS had already one shido on his name. Half way to the end, it was two penalties for the Greek, one for SCVORTOV and that was still the case as they entered the golden score. It is finally after 2 minutes and 49 seconds of golden score that the last penalty was awarded to AZOIDIS for stepping outside of the combat area, offering the victory to SCVORTOV. 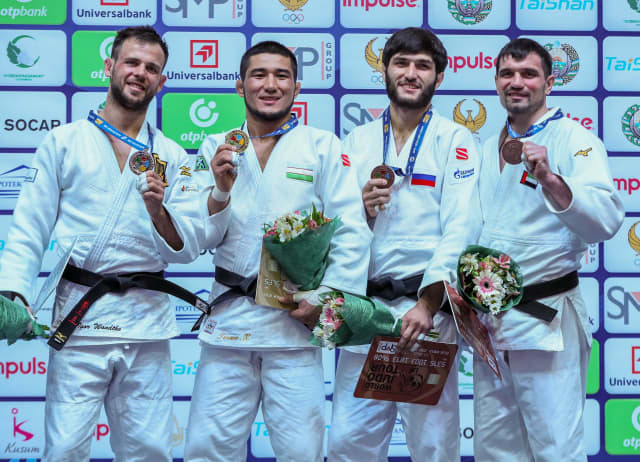 -70kg: POLLERES for Austria Smiles in Tashkent The second and last female final of the day opposed two former junior world medallists as the 2017 Junior World Champion, Giovanna SCOCCIMARRO (GER) faced the 2017 Junior World medallist, Michaela POLLERES (AUT). Within a minute, both athletes were penalized with a shido for passivity. POLLERES took the lead by scoring a first waza-ari with a counterattack and then she controlled until the final gong to win a beautiful victory for Austria and a second gold for her on a Grand Prix. 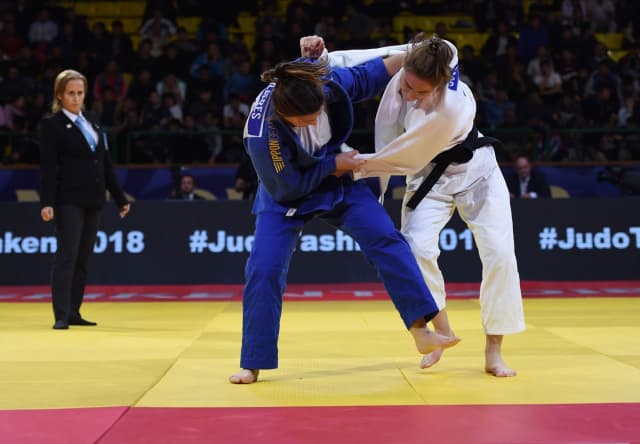 For the first bronze medal contest, another former Junior World Champion, GERCSAK Szabina (HUN), challenged Yarden MAYERSOHN (ISR), who so far had already won three medals on the World Judo Tour (Agadir GP 2018, Tashkent GP 2017 and Antalya GP 2017). The most significant moment of the match was when GERCSAK tried to apply Miklos Ungvari's special turnover on the floor to try to immobilize MAYERSOHN, but the Israeli escaped and both athletes reached the golden score with nothing written on the scoreboard. It is only after 1 minute and 43 seconds of extra time that the very first shido of the match was given to the Hungarian for passivity, but right after, GERCSAK applied a sweep movement (de-ashi-barai) for a waza-ari to win the bronze.

In the second bronze medal contest, Elvismar RODRIGUEZ (VEN), tried to recover after the disappointment of having lost her quarter final against of MAYERSOHN. She faced the young Hilde JAGER (NED) for a place on the podium. As JAGER was more passive than RODRIGUEZ, she was penalized with a first shido before they reached half of the match. As the athletes were entering in the last minute, the Venezuelan was penalized for blocking her opponent, but she could finally find an opportunity ion the floor with an armlock for ippon and win her sixth medal on a Grand Prix. 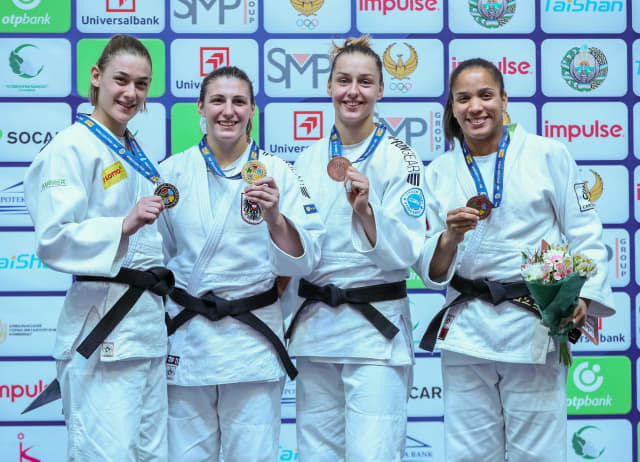 -81kg: KHAMZA Concludes Day 2 with Gold The last final of the day opposed the Kazakh Didar KHAMZA (KAZ) and NYAMSUREN Dagvasuren (MGL). The Mongol was quickly penalized with a first shido. With one minute and 13 seconds on the scoreboard, NYAMSUREN, who had been working to find an opportunity, finally got one, with a precise low-o-uchi-gari for Waza-ari. With one more false attack he nevertheless took the risk to come close to the disqualification. And with 3 seconds left only, KHAMZA also scored a waza-ari to extend the time to golden score. One more shido was given to KHAMZA for a false attack, before he put the last bit of energy he had left to score a second waza-ari to win gold for Kazakhstan. 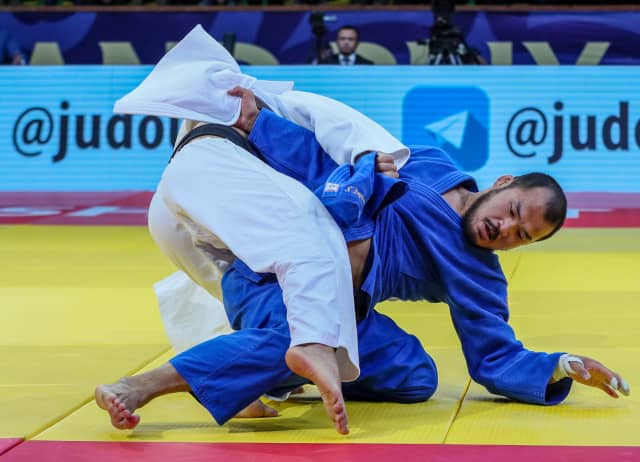 The first bronze medal contest of the last category of the day opposed UNGVARI Attila (HUN) and Vladimir ZOLOEV (KGZ). After a little more than one minute, both athletes were penalized for blocking the opponent, before UNGVARI received a second penalty for keeping his hands on the same side of the judogi too long without attacking. It is with this situation on the scoreboard that they entered the golden score, with nothing to lose but the medal. With ZOLOEV being a little more active, it was UNGVARI who received the last shido and got disqualified, ZOLOEV winning his ticket to go on the podium. 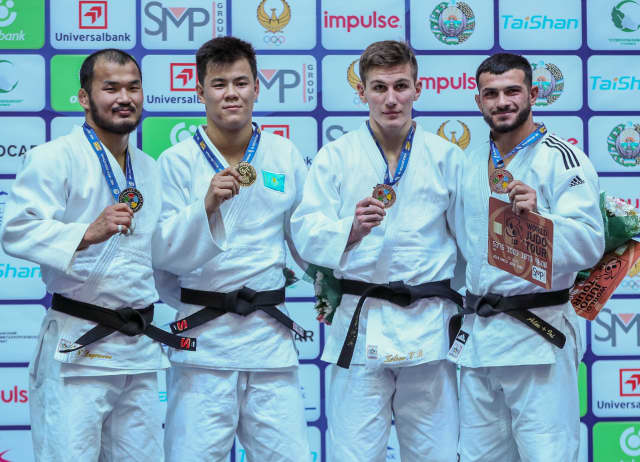