Written by Nicolas Messner, Jo Crowley, Leandra Freitas on 06. Mar 2021
Photographs by Gabriela Sabau, Emanuele Di Feliciantonio
Share
For today's technical anlysis, we asked Christophe Massina (FRA) and Rosicleia Campos (BRA) to tell us what they think about this second day of competition in Tashkent.

Men’s Technical Analysis: Christophe Massina (FRA) - Coach of the French mens' team.  At -73kg I really enjoyed seeing the judo of Obidkhon NOMONOV (UZB). He is a very young athlete, but showed today his very good left uchi-mata against Tommy MACIAS (SWE) and then unfortunately on Guillaume CHAINE (FRA). The two other things that had my attention were the return to competition of Miklos Ungvári (HUN), 40 years old and still competing in the high level and today participating in a very good match against young BOYNAZAROV, Jaloliddin (UZB). For Miklos, we send all our respect for this comeback to competition, working towards his 5th Olympic Games. The comeback also from Ferdinand KARAPETIAN (ARM) was striking, giving us such an amazing fight with the world silver medallist Rustam ORUJOV (AZE); a very beautiful barai movement (sweeping technique). That was a nice match and with throws.

SMAGULOV, Zhansay (KAZ) confirms his status, no surprises here. I know there was a moment when we didn't see him in his best shape but since the Paris Grand Slam of last year we can see that his performance is improving competition by competition and we notice his presence in the category. 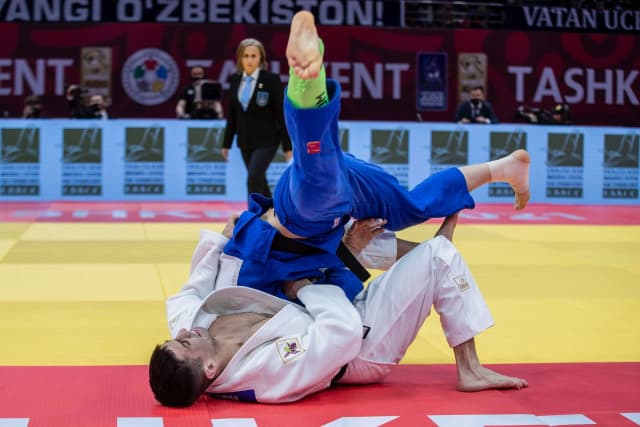 Globally we saw today a lot of throws, a lot of attacks, strong attacks from both men’s categories. We could also notice that some athletes were tired, I think because they are still getting back to their best shape due to the year without competitions because of Covid. They are getting back to the competitive rhythm and we need to understand also that there is one event after another and long travels, so all of that counts towards the athletes’ condition. Orujov(AZE) looked a little bit tired physically and without so much rhythm, so that drew my attention because it is not what we are used to from him.

Great throws today were the uchi-mata of Obidkhon NOMONOV (UZB), Guillaume CHAINE (FRA) throwing Fabio Basile (ITA) with sumi-gaeshi and ura-nage. As I said before, a lot of attacks and strong ones all day.

I also noticed that there were less shido than yesterday and this is better. Referees gave time to the athletes to throw. If there are golden scores it means that the match is balanced and if there is a good show, we need to let the show go on for some matches and not end it with shido, only when it is really obvious. On day one, for me, there were a lot of penalties, especially in the -66kg category. I definitely prefer day 2 ahead of yesterday. 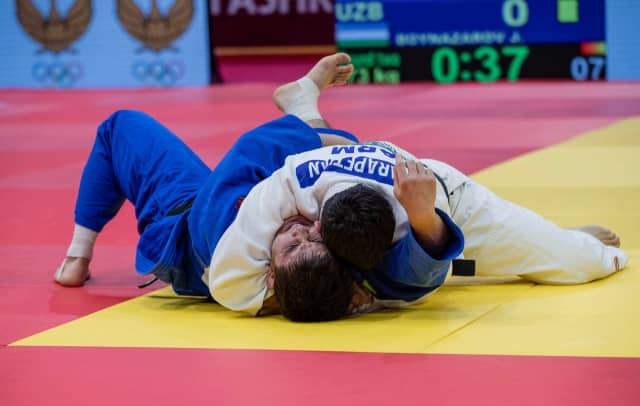 Orujov went in search of his medal, even though he was not in his best physical shape. He could control very well the medal match and his experience paid off to get the bronze.

Ferdinand KARAPETIAN (ARM) gave us a good match with the Frenchman CHAINE, who was leading the match but in the end the victory went to KARAPETIAN.

The final was very nice, a lot of attacks, a lot of commitment. It is just a shame that the match finished this way, with a shido, I think that the public didn't understand also, because it was after a beautiful judo technique, just the hand slipped under the belt. Unfortunately this is the rules, but still he did a super technique, for the judo lovers it’s a pity.

At -81kg this category has so many good athletes; you can not guess who will win the gold here. I really liked the judo of Sharofiddin BOLTABOEV (UZB), with an oportunistic judo, kata-guruma one side, tai-otoshi on the other, a really strong kumi-kata. Despite the very long day he was very strong, especially early on, resolving the match against LEE Sungho (KOR) in only 34 seconds with a beautiful tai-otoshi. 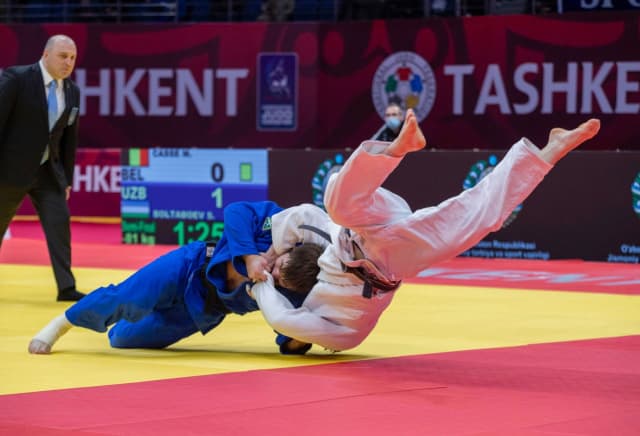 I need to talk about NAGASE, Takanori (JPN), because all day he was as usual, with very good posture, right-sider, very strong kumi-kata. It was a surprise in the semi-final when he lost against PARLATI.

Christian Parlati (ITA), another surprise man today, with his big o-uchi-gari in the semi-final against Nagase; a very particular style of o-uchi-gari, with a knee on the floor, as we are used to seeing from Guillaume CHAINE (FRA) and Fabio Basile (ITA). He managed long fights, resolving them later, with the Hungarian UNGVARI Attila (HUN) just a few seconds from the end of the match and also against Sami CHOUCHI (BEL), in golden score with a beautiful tai-otoshi (waza-ari).

Some big names were missing at -81kg but it was still the strongest category of the competition. What is amazing with this category is that you can not guess who will step on the podium. You can see in 2 former world champions out in the first round: MOLLAEI, Saeid (MGL) and WIECZERZAK, Alexander (GER). They all have a chance to win. It is not like some categories where it is always the same ones securing the podium. 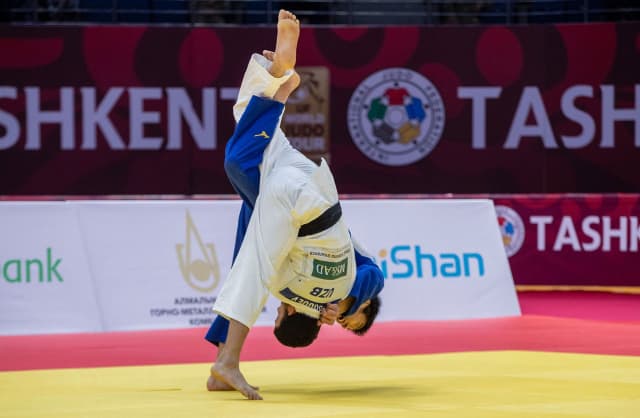 NAGASE Takanori (JPN) fought for bronze but had difficulty to find his rhythm and get into the match; I guess because of his defeat in the semi-final, but he found the solution with an amazing o-uchi-gari. This is the strength of the Japanese; they have good kumi-kata and in only one good moment they can score ippon.

The all-Belgium bronze medal contest gave no surprises. What we could see was that CASSE was trying to block CHOUCHI’s uchi-mata and CHOUCHI was blocking all seoi attacks from Casse.

The final was very impressive with Parlati surprising us again with his o-uchi-gari. Parlati brings an unusual style, an atypical athlete with strange posture, but he has beautiful technique and it’s effective. Today he threw the 2 favourite athletes for the gold.

Women’s Technical Analysis: Rosicleia Campos (BRA), Technical Coordinator of the Women's Team of Brazil At -70kg I will emphasise the home player, MATNIYAZOVA Gulnoza (UZB). She is playing at home with a beautiful crowd. She had a very good semi-final against the Japanese judoka ARAI Chizuru, bringing positive judo and showing evolution in her way of fighting. She also has good grips.

For a bronze medal, what an amazing ippon and I also believe it is important when you organise an event like this grand slam, that the country gets athletes on the podium and Matniyazova did that for Uzbekistan today. For the host country it gives a good signal and it will definitely help to get more support. It stimulates people to do sports and it gives visibility to judo, especially because MATNIYAZOVA's medal comes from a woman. This is great and here, as UZB has no tradition of female judo, it will help a lot. 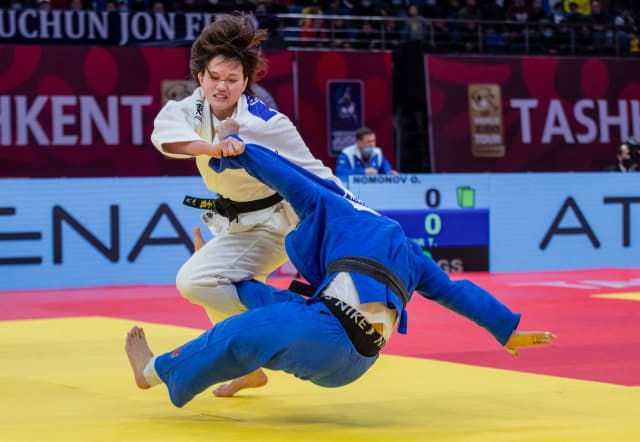 You can see that the UZB team entered 2 girls per weight category, so it means female judo exists. Generally speaking the investment has been very much directed towards the male team, but we now see 2 girls with medals in great competitions so we will see in the future a greater investment, with the women getting stronger with a more united team. This medal obtained by MATNIYAZOVA Gulnoza (UZB) today can be a great motivation for women’s judo to start gaining fans, for the girls to register more in the judo from now on.

Another athlete is ARAI Chizuru (JPN), she went through 2 golden scores, very hard ones, with Hungarian GERCSAK, more than 7 minutes and with MATNIYAZOVA (UZB). I believe this is amazing, not only for the athletes, but also because of seeing all the other countries working hard and beliving that they can win against the Japanese.

When the female Japanese team is present, they are almost always on the top of the medal table, but they can also now realise that the path is not easy, even for them and that the other judoka are also believing in their potential. I think this is very important for the global growth of the category. 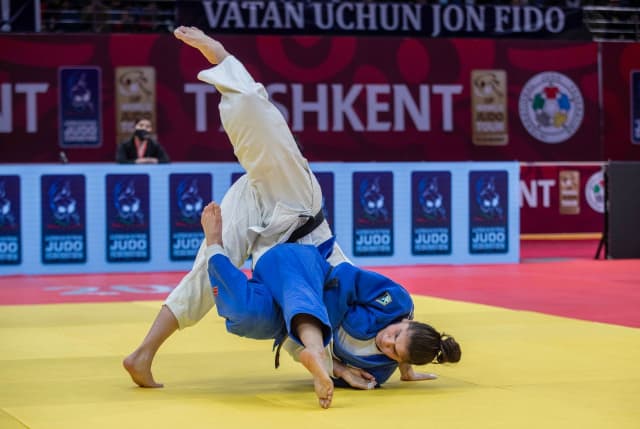 Also I was happy for and impressed by Ayuk Otay ARREY SOPHINA (CMR), even if she didn't go very far. She won her first fight, even if it was with an accumulation of shido. I saw that she came with a good posture, attitude, constructive judo. She was trying to throw with o-soto-gari, building for a nice technique. It’s very important for the development of sport on a global level, to see all countries of the world fighting matches at the same level, showing that sport goes beyond borders.

Ellen SANTANA (BRA) is maturing, losing for the bronze here to RODRIGUEZ (VEN). She had a very tough fight, very balanced with the kumi-kata. RODRIGUEZ has the opportunity to train in different places; we know that she trained in Japan and that makes a difference at the end of the fight here at the grand slam.

At -63kg Andreja  LESKI (SLO) was again in a final. She impresses me; even having another great athlete in her weight category in her country, she keeps very motivated, showing that she also has a place here under the big spotlights, winning against everyone. She's young, talented, strong physically and metally, because it’s not easy to see that you could have your place to go to the Olympics but maybe you'll not be there because you have the current Olympic champion in your category. So, it is nice to see that this internal competition for the Olympic Games takes place within a given delegation, here Slovenia. 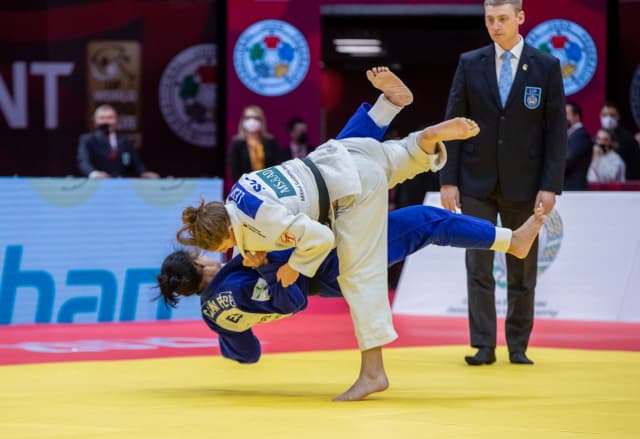 Everyone is here thinking about the Olympics. When you enter judo, your dream is to go to the Olympics, but it is judo and everything can happen.

Gili SHARIR (ISR) just came from the juniors and is already here, fighting in the highest level events and we can see her progression competition after competition, even if she is not going for a medal all the time. We should keep an eye on her!

This category has such a good level. Here we didn't have the current world champion Clarisse Agbegnenou (FRA), or Tina Tratenjak (SLO), but still the level was really high.

Anriquelis BARRIOS (VEN) is an athlete who is difficult to fight. Her stance and her size get in the way of a lot of people and she is arriving and asserting herself in the category, competing for medals. Now, after Covid, she has already won 3 medals on the World Judo Tour. I think this is very good.

LESKI confirmed her place on the podium and Amy LIVESEY (GBR) also. This is young podium and this is very important. We can see that all teams are rebuilding, adding the young athletes to the senior team and with a good level. It means all teams are going though a renovation process.

What is very good is that the fights are getting more time on ne-waza. We are now letting the fight go on the floor for longer. Ok, I would like less time with the Japanese because they massacre the girls on the floor, but it is very nice to see that more time is given to ground work.

I am also very happy to see women refereeing finals. I think this is very good and it shows that women are earning their places, where until very recently all were occupied by men.