Written by Nicolas Messner on 28. Jun 2019
Share
For four days (June 26-29), the Crans Montana Forum is gathering in Geneva, Switzerland to talk about peace, development and stability. During the official dinner, organized in partnership with the 'Cercle des Ambassadeurs à Paris', ten-time World Champion and two-time Olympic Champion, Teddy Riner of France, was appointed as goodwill ambassador of the Crans Montana Forum. 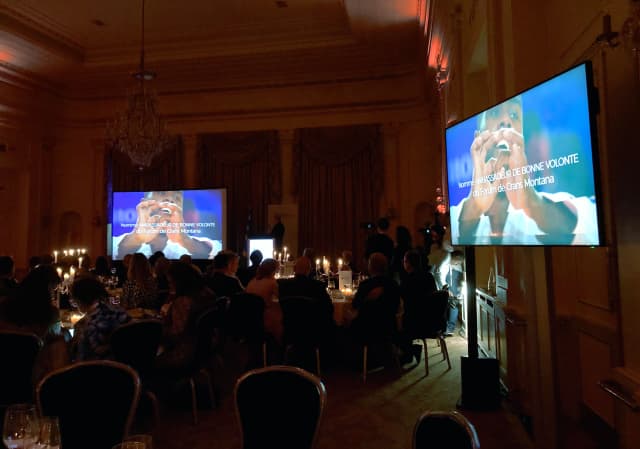 Teddy Riner could unfortunately not be present, as he had announced the same day, that he was about the resume his sports season on the occasion of the Montreal Grand Prix to take place from July 5-7 in Canada, but the French giant delivered a video message to all the participants: "I am sorry I couldn't be with you tonight, but after one year and a half without competition, I just got my selection to go get the points to qualify for the Olympic Games. I want to thank Jean-Paul Carteron, for having thought about me for this beautiful initiative, to name me an Ambassador for the Crans Montana Forum. This is with great pleasure that I accept. It is in line with the values of my sport. You can count on me.“

Before becoming a Crans Montana goodwill ambassador, Teddy Riner was already a goodwill ambassador of the UNICEF. A week ago, he participated in an impressive judo event in Kilis, south Turkey. Since 2014, in partnership with the Turkish Judo Federation and local authorities, the International Judo Federation has developed a Judo for Peace programme aimed at restoring the smile of hundreds of children who have had to flee the war in their country, and who ended, often traumatized, with what remains of their family, in the Container City camp. Within a few years, the programme has been growing continuously. It all began with a few dozen children in 2014. Today there are more than 2,000 young people who have discovered judo and learn the basics of the sport both from a technical and mental point of view. There are currently 350 regular judokas, who took part in the UNICEF event, where Teddy could share his passion for judo and his passion for transmitting the judo values.

Mr. Jean-Paul Carteron, Honorary Chairman and Founder of the Crans Montana Forum, declared: "It is a great honour to have Teddy Riner as a Goodwill Ambassador of the Crans Montana Forum. He is not only a great champion but also a champion in life and I believe that we share the same values and the same desire to build a better world. Judo is not only a sport. It is much more than that. Through the initiatives of the International Judo Federation, such as the Judo for Peace and Judo for Children programmes, and thanks to its President Marius Vizer, we have built a strong partnership with judo over the years and we are looking forward to developing it further in the future."

Together with Teddy Riner, Mr. Philippe Douste-Blazy, Deputy Secretary General of the United Nations and a long-time friend of the Crans Montana Forum, also became a Goodwill Ambassador of the organization.

The Crans Montana Forum (CMF) is a Non-Governmental International Organization established since 1986, whose mission is to build a better World “Towards a more Humane World”. The 2019 edition of the forum also celebrates the 30th anniversary of the organisation.

The CMF is closely working with all Governments, specialised Bodies, International & Regional Organizations such as the UN, UNESCO, UNIDO, FAO, the EUROPEAN UNION, the EUROPEAN COMMISSION, the COUNCIL OF EUROPE, OFID… and naturally numerous NGOs. The IJF has been a partner of the CMF for many years.

Its primary aim is to strengthen international cooperation by promoting good practices and allowing a permanent dialogue between those in the public and private sectors who are the real decision-makers on whom the future of our World depends. The CMF organizes several events per year. Every time, decision-makers, always at a high level, generally from about a hundred countries, meet in a private and informal setting to discuss the political, social, economic and security challenges of our Century. Each of the Forums organised throughout the world (Brussels, Geneva, Rabat, Dakhla, Vienna, Barcelona, Crans-Montana, Bucharest, Budva, Baku, Zagreb, Roma, Sarajevo, Tirana, Athens, Malta, Bahrain etc.) represent unique opportunities for Businesses and Government Officials to network and strengthen their partnership relations.

News
The future of Judo has Passed Through Switzerland