The 2-second Man and Co.

Written by Nicolas Messner, Marina Mayorova on 21. Sep 2019
Share
It was a great performance from the Uzbek team on home soil, a day that the public, who came in large numbers at the Humo Arena, will remember for ever. Mainly because of the results of their athletes, four of whom made it to the finals, two won the title, two got the silver, while Sharofiddin BOLTABOEV set a new record of the fastest ippon scored during an IJF event. 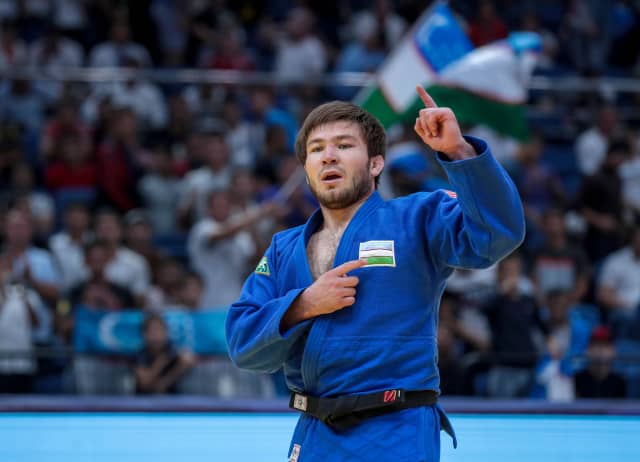 The previous record was hold by ANAI Takamasa (JPN) against Ariel ZEEVI (ISR) and it was in 2010. On this second day of the Tashkent Grand Prix, BOLTABOEV only needed 2.88 seconds to win against NAI Rigaqi (CHN), faster than to make a coffee, to put on the judogi or to get on the tatami and to bow.

Most of the spectators didn't have time to realize what had just happened. The photographers were not ready to take any picture. Fast, that was it and efficient. Every record is meant to be beaten, but for sure it will take a while before an athlete can score a perfect ippon in less than three second after the first hajime.

At the end of the second day of the Grand Prix, already 23 countries stepped on the podium, which illustrates one more time the universality of judo at the international level.

The public will also remember the cultural performance achieved during the opening ceremony of the Grand Prix, where the 70 delegations were presented. 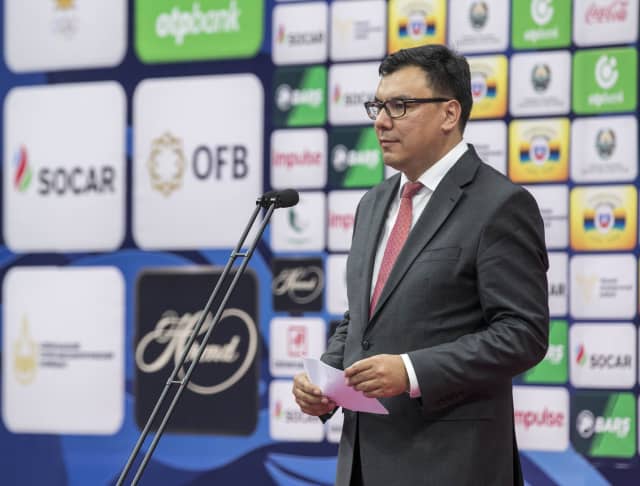 During the opening, Mr. Vladimir BARTA, IJF Head Sport Director, declared: “In the name of the International Judo Federation and its President, Mr. Marius Vizer, I am honored and pleased to welcome you in Tashkent for the seventh edition of the Grand Prix, which will be followed by the IBSA Grand Prix, based on the Memorandum of Understanding that the IJF signed with IBSA. This tournament has become an important competition in our calendar and a crucial step towards the Olympic Games next year in Tokyo. I want to thank the Uzbek authorities, the Judo Federation of Uzbekistan and all those who helped to organize such a great event. I wish all the best to all participants and let the best win, with respect and fair-play.“

Mr. Aziz ABDUKHAKIMOV, Deputy Prime Minister of Uzbekistan declared: “First of all, we are happy to see you in Tashkent. Today is a great day for sport. Under the leadership of the President o the Republic of Uzbekistan, Mr. Shavkat Mirziyoev, a lot of work has been done in the country to develop and popularize physical culture and sports, to provide young people to opportunities to practice different sports and in particular judo and parajudo. 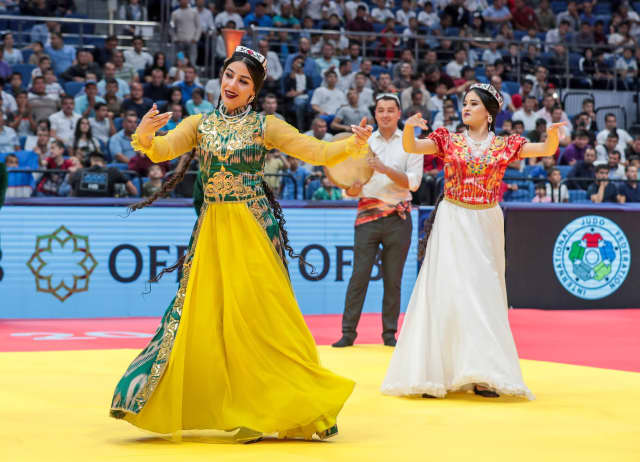 Cultural Performance during the Opening Ceremony

Today the number of people who regularly practice judo and parajudo is more than 34,000. As result, our athletes continuously show positive results in international arena. We have strived to create the best possible conditions for you. Now it's time to talk about competition. During five days, all athletes will compete to gain important points to have the right to participate in the next Olympic and Paralympic Games. We will follow the results with great interest. We wish the best to all of you.

Saying that, I declare the Tashkent Grand Prix 2019 official open.“ 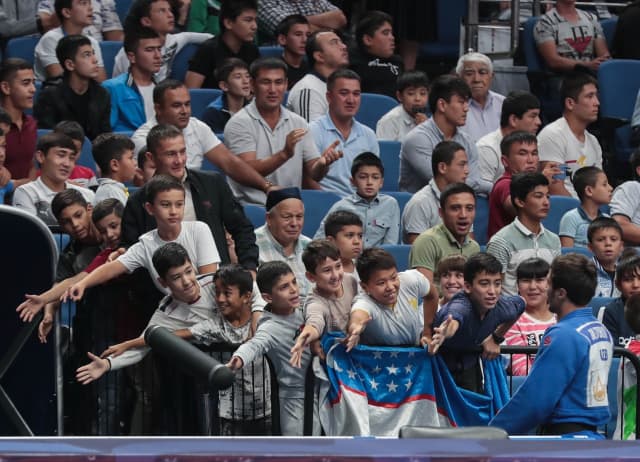 In the opposite of the two matches for the bronze medal that had opened the ball of the category, and which were continued for a long time in the golden score, the final between Anriquelis BARRIOS (VEN) and Kathrin UNTERWURZACHER (AUT) started at a steady and dynamic pace.

Obviously this contest would not go until the end of the four minutes of regular time. If the Venezuelan was dangerous with her long crossguards, it did not take long before the Austrian created a situation on the ground to immobilize her opponent in the most opportunistic way. 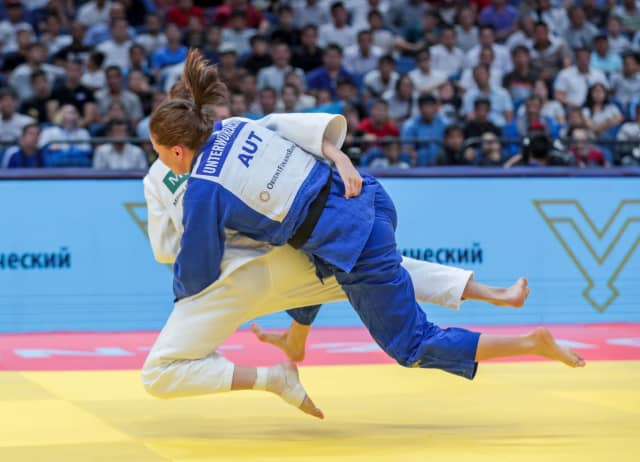 Russia, particularly successful during the first day of competition, was again present in the final block with Kamilav BADUROVA (RUS) who faced Lucy RENSHALL (GBR). After the first four minutes, only shidos had been distributed, two for the British and one for the Russian. It took almost four more minutes before Lucy RENSHALL started under the center of gravity of her opponent aiming to project on a particular ko-uchi-gari low. This is the forth medal on the Grand Prix circuit, for RENSHALL. 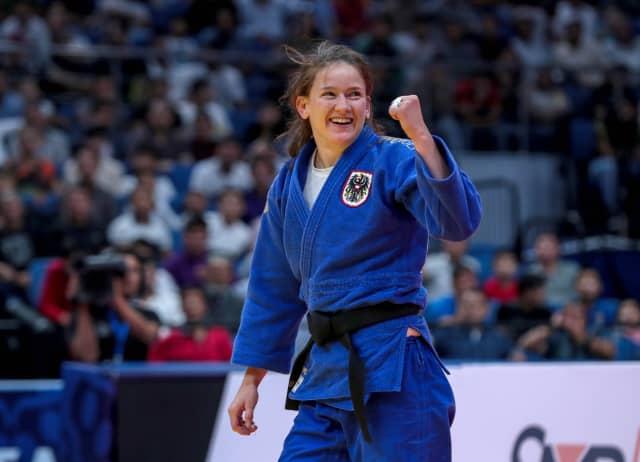 In the second place, the two athletes, Inbal SHEMESH (ISR) and Gili SHARIR (ISR), knowing each other perfectly well, they neutralized themselves during a big part of the match, before SHARIR was forced to forfeit due to an injury. 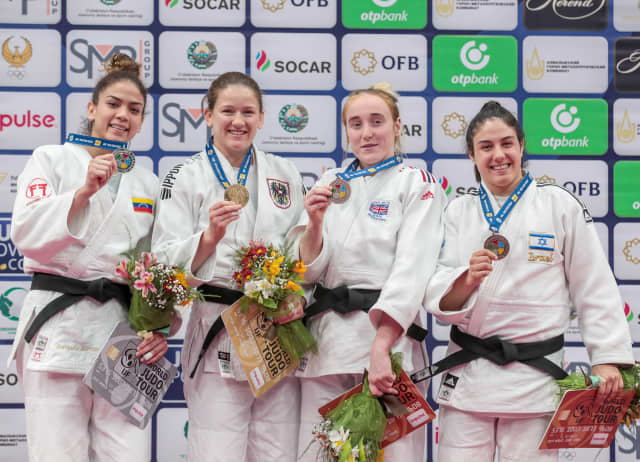 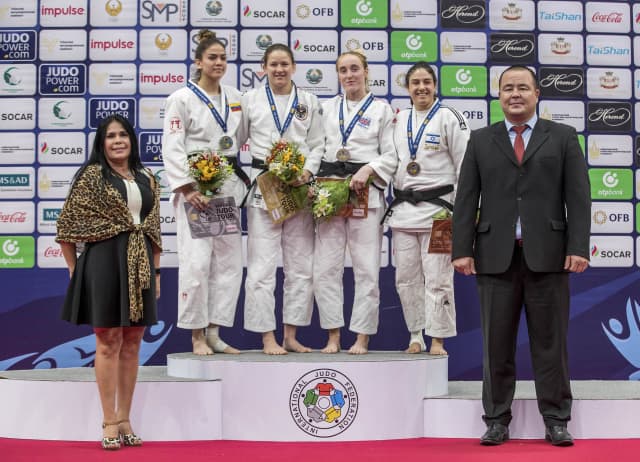 For the second time of the day, Uzbekistan was present in the final, this time with Gulnoza MATNIYAZOVA who, despite the support of the public could do nothing against the power of Elisavet TELTSIDOU (GRE). The latler threw MATNIYAZOVA several times in the air, at first for a waza-ari, followed a few moments later by a monumental ippon on the edge of the competition area. 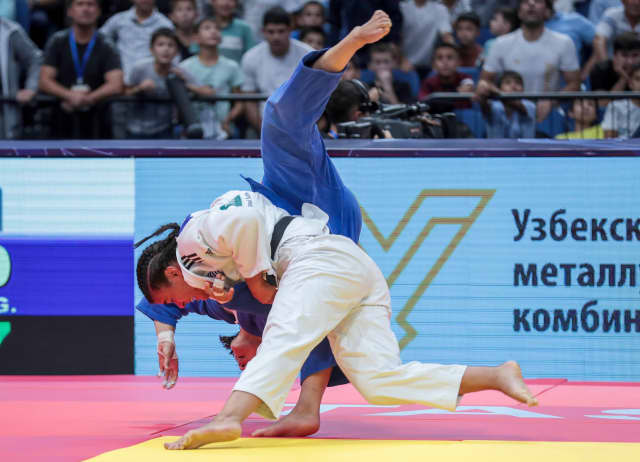 In the first final of third place, Elvismar RODRIGUEZ (VEN) won against Aoife COUGHLAN (AUS), while the latter was penalized a third time in the golden score. 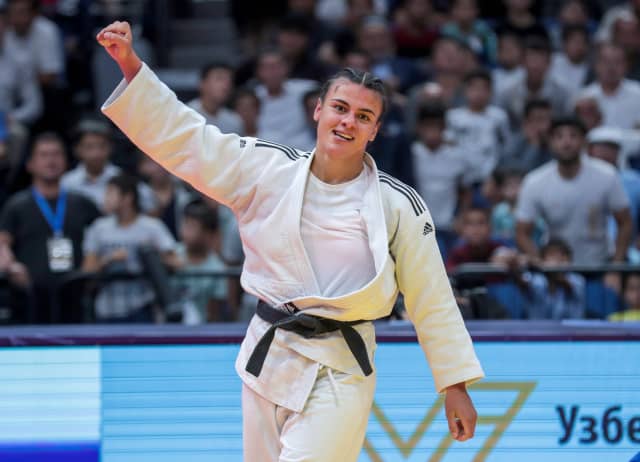 In a 100% European match between Alina BOEHM (GER) and Hilde JAGER (NED), for the second bronze medal, it was the Dutchwoman who scored first on an o-uchi-gari at less than a minute and a half. the end of regulation time, before concluding on the ground on an immobilization of which BOEHM could not get out. 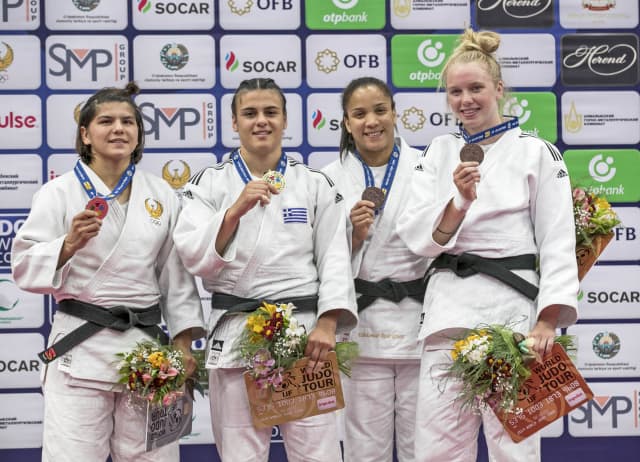 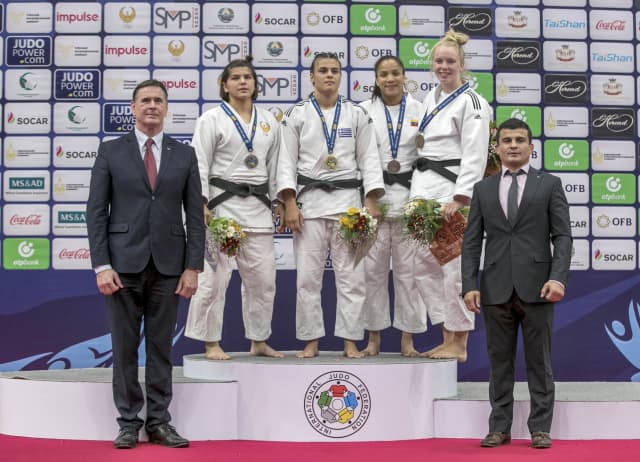 Behruzi KHOJAZODA (TJK) started the final against Khikmatillokh TURAEV (UZB), on top spot. Despite the support of the entire public, the Uzbek seemed very quickly helpless against the ardor of the Tajik who thanks to a superb ippon-ko-uchi-gari, scoring waza-ari, took the lead of the final. Handicapped by cramps in his hands, TURAEV did not seem able to reverse the trend. Yet in the final second of the match, on a last desperate attempt, he scored a magnificent waza-ari, opening the doors of an unexpected golden score. 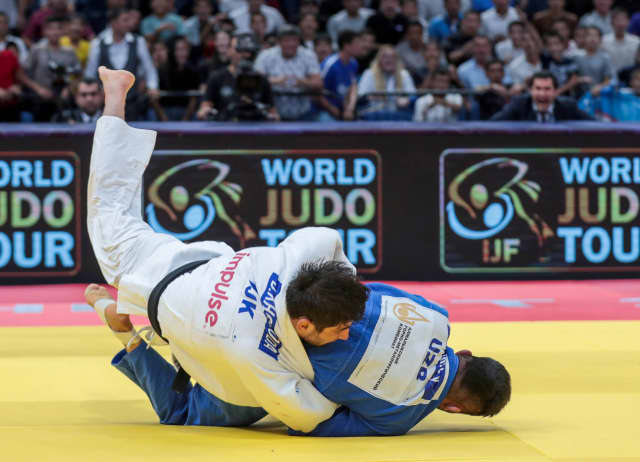 In an atmosphere of madness, the match resumed. Dominated throughout the contest, TURAEV was totally reinvigorated and went to the assault of his opponent with a force increased tenfold. In a last action still improbable minutes before, the Uzbek scored a second waza-ari. It was no longer possible to speak in the stadium, as the sound level had reached a paroxysm that one meets only during the great moments of sport. Disappeared the cramps in his hands, place to the pure joy of winning the first gold medal of the host country. 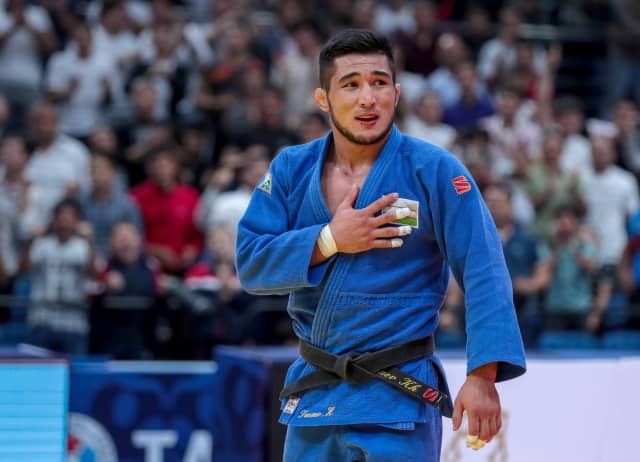 Number one player before the competition, Tommy MACIAS (SWE) did not expect to be in a game to compete for the bronze medal, in which he was opposed to Cuban Magdiel ESTRADA. He imagined even less that the latter twice would flip him on his back to steal the medal.

The first match for a place on the podium between Artem KHOMULA (UKR) and Bilal CILOGLU (TUR) was one way, CILOGLU succeeding twice to project his opponent on waza-ari. 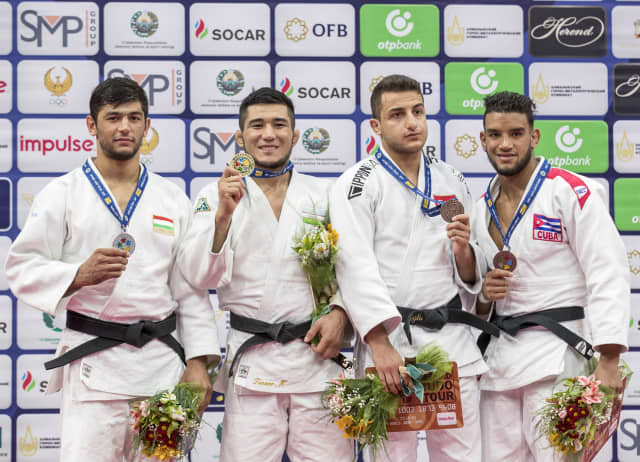 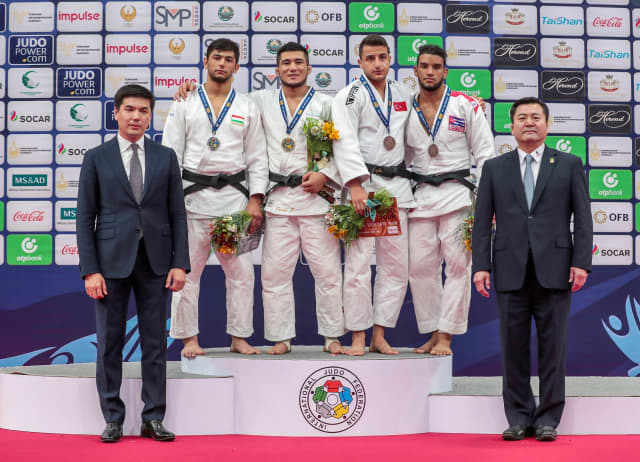 It's always difficult to find a fellow countryman whose judo is known by heart. It's never easy either because the world ranking has a definite impact on national teams when many athletes are able to get into the points. Should they give all? Should they keep a little underfoot for fear of losing? It is certain that these are questions that competitors ask themselves. 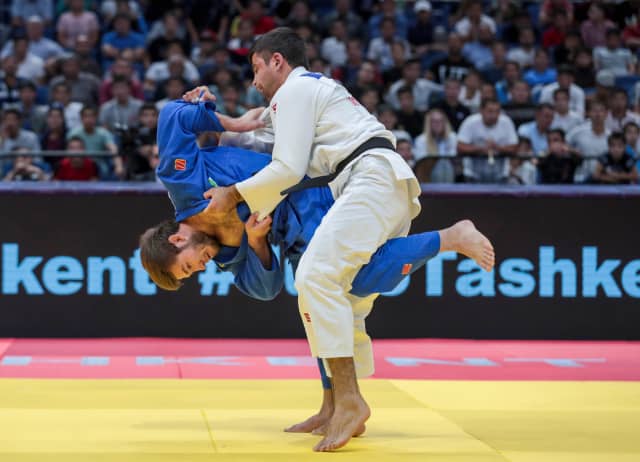 However, Kamoliddin RASULOV (UZB) and Sharofiddin BOLTABOEV (UZB) have totally engaged in a final that has remained indecisive for a long time. It was not until the golden score that BOLTABOEV found the opportunity to project his opponent to win the title. It should be noted that BOLTABOEV now holds the record for the fastest ippon in the World Judo Tour, scored in the second round of the competition against the Chinese, NAI Rigaqi (CHN). 2.88 seconds only were needed for BOLTABOEV to continue the competition and reach the top of the podium

It was on a very good kara-guruma attempt that Shamil BORCHASHVILI (AUT) quickly won the first match for the bronze medal against Muso SOBIROV (UZB).

In the second match to access the podium, Sami CHOUCHI (BEL) was against Abas AZIZOV (RUS). The match was tough and tight, but it was after a last strong attack of the Belgian that the third shido for passivity was given to AZIZOV. CHOUCHI could form a heart with his hands, and enjoy this beautiful medal. 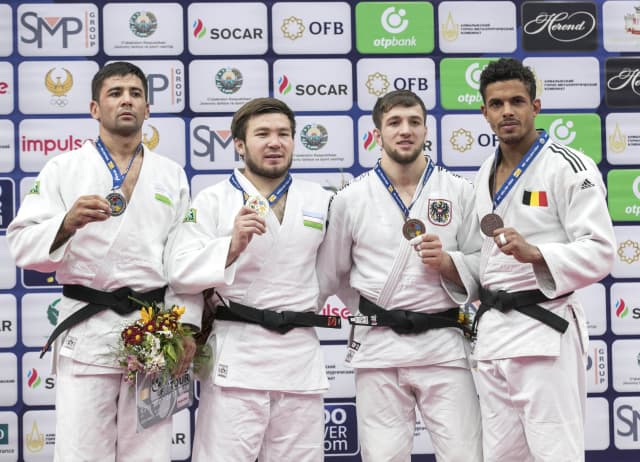 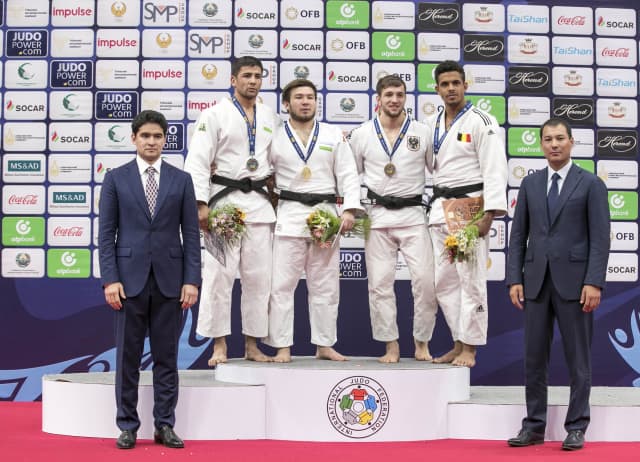