The gold of freedom

Written by Nicolas Messner on 17. Nov 2019
Share
Saeid Mollaei will soon resume his career under the IJF Refugee Team colors, a career that was interrupted in Tokyo at the end of August (see: https://www.ijf.org/news/show/the-true-story-of-a-fight- for-life). This will be an important moment for the 2018 World Champion, who since Wednesday, August 28, has seen his life totally change. Now a refugee in Germany, he was in Brussels on Saturday, November 16th, to receive the Crans Montana Forum gold medal from the hands of Ambassador Jean-Paul Carteron, for the difficult decision he took in Japan. 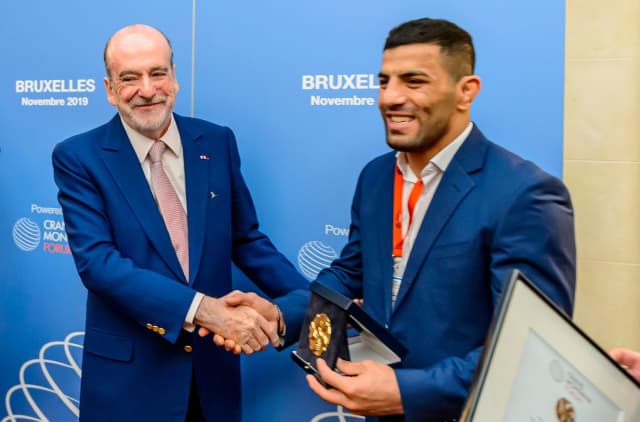 Amb. Jean-Paul Carteron and Saeid Mollaei during the awarding ceremony

Having traded the judogi for the suit on the occasion of the ceremony, Saeid said he was more impressed to have to speak in front of a crowd of selected personalities than when he had to get on the tatami to start a world championship. Actually within two months, many things have changed for the former world number one: "It has been difficult. Very difficult months. Being far from your family and not capable of at least talking with them freely is harsh. But I keep going. I step in a new life, and try to cope with all difficulties.”

Saeid admits that everything is new for him: “I come from a quite traditional society, from a traditional family. Now, I live in a modern society, among people with a quite different culture, rules and behaviors. Everything is different. But a sportsman learns to cope with situation, and adapt oneself, and this is what I am doing.”

Since Tokyo and after a few days of rest, the Champion has been training daily to reach his goal and dream, to be an Olympic Champion: “Every morning I go to the gym, and I practice judo in the afternoon, 6 days per week. I participated in a few competitions with my judo club and thanks to the IJF I could also participate in training camps.” 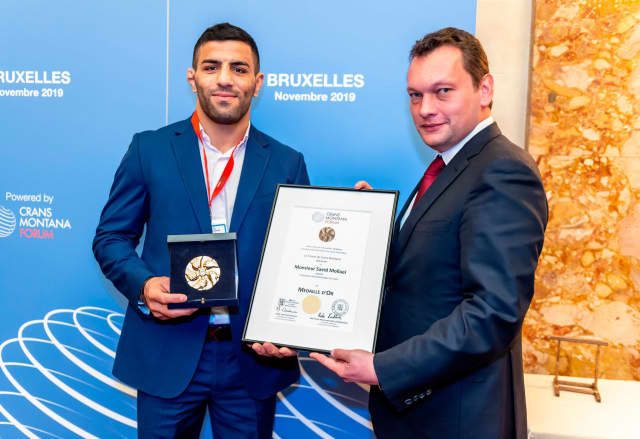 Saeid Mollaei and Pierre-Emmanuel Quirin during the awarding ceremony

Far from the World Judo Tour, he has been following the World Judo Tour on TV, but in a few days, he will again fly to Japan: “When I was told that I will go to Osaka, I intensified my trainings and exercises. I left Japan with tears. I cried a lot. But now to go back to Japan means a lot for me. I will do all I can to be ready for the Olympics, and Osaka is the very first step in this path.”

As the Crans Montant Forum meeting in Brussels was dedicated to Women in Africa, when Saeid received the gold medal of the Forum, he declared: “It is a strange feeling to be an Iranian man standing in font of you, men and women committed for years to fight against discriminations and to stand for equality between human beings. A strange feeling for a man such as me, who has done no noteworthy civil or social action, who has no knowledge about politics. I know nothing of these. But I know this: Discrimination has no gender, defending equality needs courage, and sport teaches us to be courageous. I am a sportsman, not a politician nor an activist. It is through sport, through the principles of sport that I am trying to fight for a better world. You kindly welcomed me among you, I am honored. I really appreciate it and thank each of you, and all organizers of Crans Montana forum, specially Mr Jean Paul Carteron. I thank you from the bottom of my heart.“ 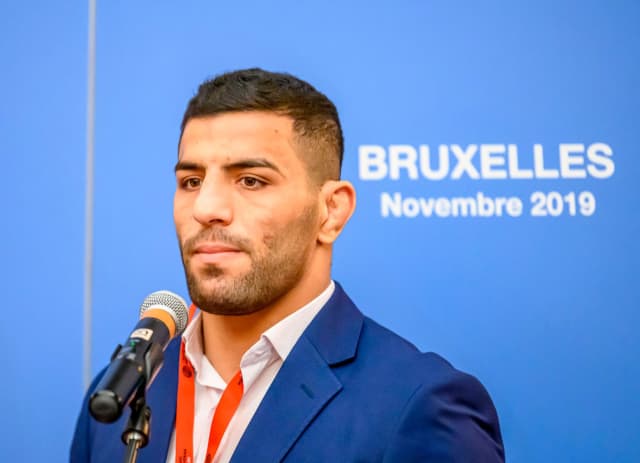 For about 35 years, the Crans Montana Forum has become an exclusive meeting point for high level decision makers from Governments and Business who join the organisation in order to share experience, exchange ideas and network for their common interest. The Forum is a Non-Governmental International Organization established since 1986, whose mission is to build a better World “Towards a more Humane World”.

Ambassador Jean-Paul Carteron, Executive President and Founder of the Crans Montana Forum, who presented the prize together with Pierre-Emmanuel Quirin, Director General, said: “Today's world is in a really bad shape. Everything seems to collapse and to go in the wrong direction. Sports and judo in particular is one of the only sectors that is still promoting values that can help us to build a better world. What Saeid Mollaei did, what this great champion did in Tokyo and the way he decided the stand up and fight for his freedom is an amazing example of what sport can teach us.“ 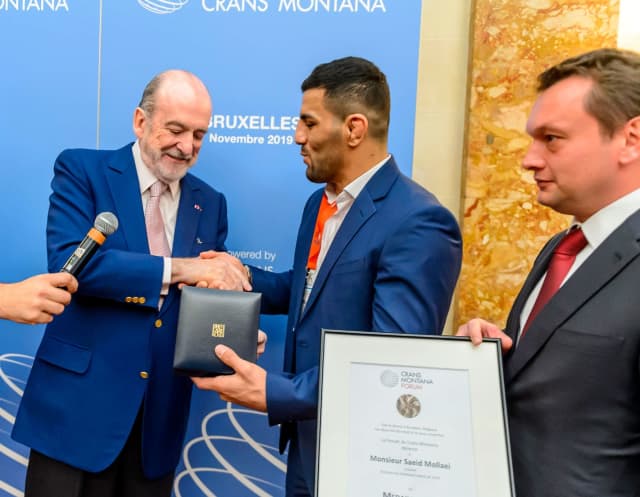 As Amb. Carteron said, freedom is the key of all this story of today's society. Saeid Mollaei is now learning to be free. This is not an easy process but as a champion in life, he is learning and one step after an other, enters into a new world where he can decide what he wants the most. For the time being, it is to become an Olympic champion: “Without the support of the IJF and the one of my new family in Germany I couldn't be here. The people who are supporting me are like angels who lead me through this new life. I don’t know how to thank them. There are great. I will do all my best to get the Olympic medal, as a gift to them and to all judo family.”

Saeid concluded: “I thank the organizers of Crans Montana Forum for their invitation and the medal. I am honored. I know that through sport we can fight against discrimination and inequality. We must try to make a better world. A peaceful world, more equal, more friendly, and more fair.”