The Zagreb GP Makes Way for the Young Generation

Written by Nicolas Messner on 24. Sep 2021
Photographs by Gabriela Sabau
Share
It can now be said that the Tokyo 2020 Olympic Games are part of the history of world judo; a magnificent history which ended in the most beautiful way after five years of fierce battles, first to obtain an Olympic qualification and second to reach the podium. From today, upon the opening of the 2021 Zagreb Grand Prix, Croatia, global judo has introduced a new chapter that promises to be exciting.

In the months and weeks to come, athletes from all over the world will, for the oldest and most successful, try to regain their level from the previous Olympiad, while the youngest will try to gain valuable places in the world ranking in order to open the doors to the next Olympic Games in Paris in 2024.

The Parisian rendezvous is less than three years from now. The new tactics and strategies will therefore have to be put in place quickly by the national federations. There's no time to lose! Thus, even if the Zagreb Grand Prix is placed in a transitional period, it already allows the drawing of lines for this current Olympic cycle.

Just before the beginning of the first final block of this new era for international judo, during the opening ceremony, the President of the Croatian Judo Federation Dr Sanda Corak said, "After an absence of one year, welcome back to Croatia and Zagreb for the Grand Prix. We have the honour of having the Prime Minister of Croatia and the President of the IJF present. We are very happy to host a Grand Prix that enables young athletes to open a new cycle. This time we decided to do something a little different and that is why this will be a Grand Prix organised as an environmentally friendly event. Thus, we will calculate our carbon footprint and it will be the first event ever organised that way. I wish you the best of luck and to stay safe in Croatia and in Zagreb." 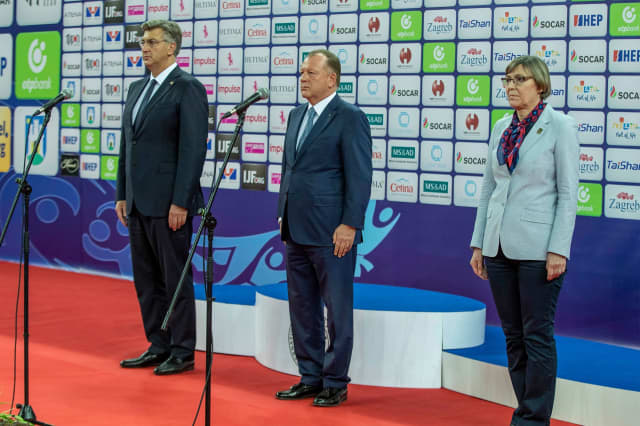 Then Mr Marius Vizer, President of the International Judo Federation, took the floor, "Your excellency Mr Prime Minister, distinguished guests and participants, welcome to Zagreb. This is the first event after the Tokyo Olympic Games. I want to congratulate all participants of the Tokyo Olympics and also the first ever world champion for Croatia. Thank you for the continuous support of the Croatian authorities and government for the development of sports and judo in the country. Enjoy the Zagreb Grand Prix and good luck." 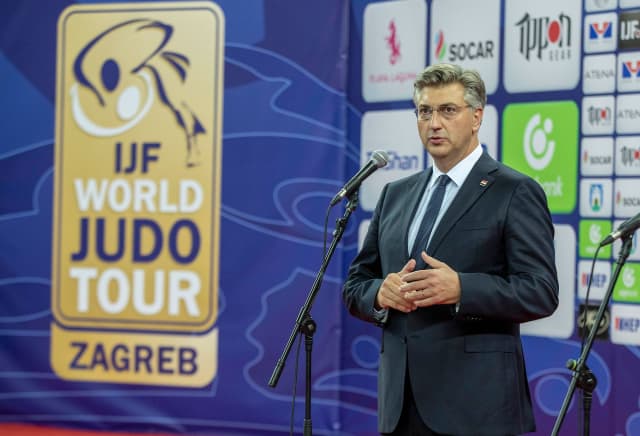 Mr Andrej Plenkovic Prime minister of the Government of the Republic of Croatia, then declared the Zagreb Grand Prix open, "Dear athletes, dear participants, welcome, on behalf of the government, to this event organised by the IJF and the Croatian Judo Federation. Thank you for choosing our country. This is the first big judo competition after the Tokyo Olympics and all judoka are keen to show their skills. Judo is a great sport and the message of judo has been well received all over the world. Already more than 20 million people have joined the sport with its values so prominent, just as it is stated in the IJF anthem 'judo sempre vivra'. This Grand Prix will bring a lot of attention through social media and TV broadcasts. You have the full support of our government. I declare the Zagreb Grand Prix, Croatia, 2021, open." 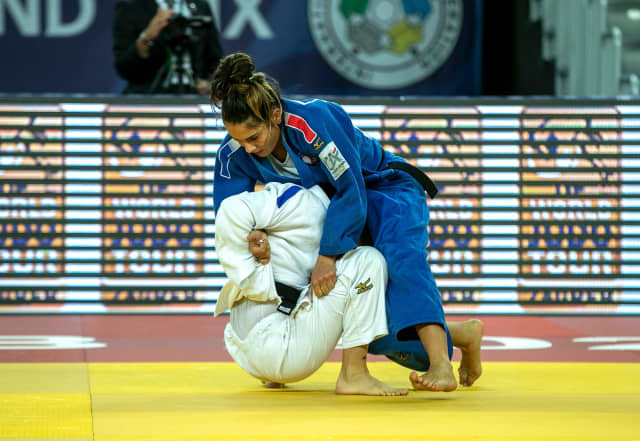 Team France performed so well during the Olympic Games but also has an amazing reservoir of top athletes, especially among the women. This was demonstrated again today with the final victory of Blandine PONT (FRA) who upset VIEU, winning with three clear shido. 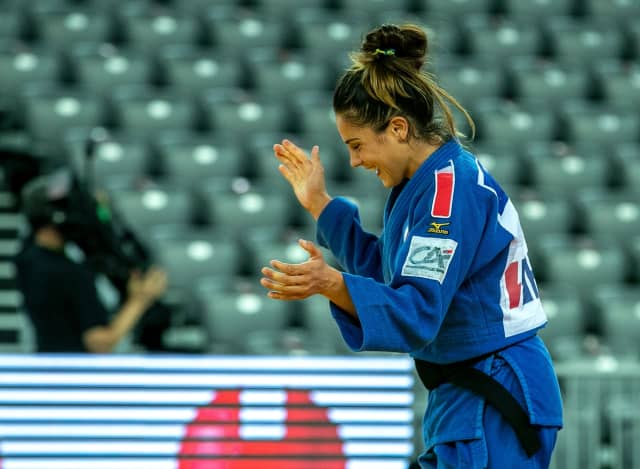 Young Katharina TANZER (AUT) was opposed to the experienced Milica NIKOLIC of Serbia, who has so far already won 17 medals on the World Judo Tour. The first minute was mainly spent on the floor, with a nice piece of ne-waza from the Austrian, but she could not conclude the match there. Until the last 45 seconds the match seemed quite balanced but NIKOLIC produced a strong piece of work from the end of the sleeves to score a waza-ari, completed with an immobilisation for the ippon.

For the second bronze medal contest, Amber GERSJES (NED), junior world champion in 2017, met Natasha FERREIRA (BRA) for a place on the podium. With a waza-ari to each at the end of normal time, the competitors entered golden score. After three minutes of extra time, GERSJES scored a second waza-ari with a left-handed uchi-mata, to win her first medal in a Grand Prix. 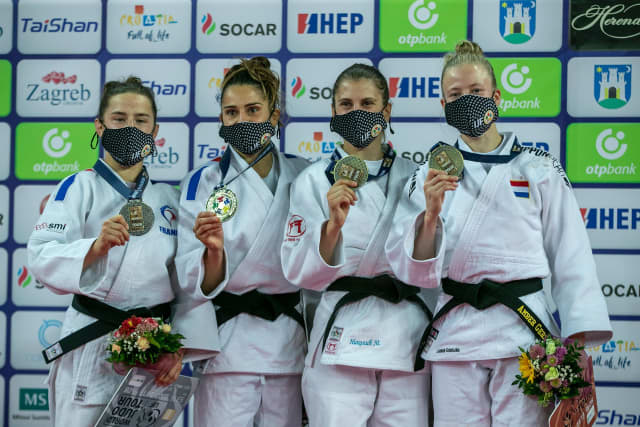 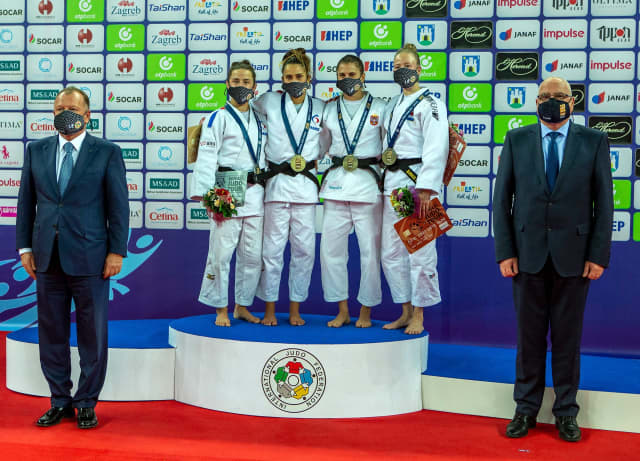 Medals and flowers were presented by Mr Marius Vizer, President of the International Judo Federation and Mr Tomislav Druzak, State Secretary for Sport and Personal Representative of the Prime Minister of the Republic of Croatia

26 year old Samuel HALL (GBR), silver medallist at the 2015 European Junior Championships, is part of a generation of athletes who already have a little experience, without having yet really broken through at the international level and who came to Zagreb to test themselves on the world circuit at the start of this new cycle. That was a good idea for HALL, since he climbed to the final, where he met the Italian, two years younger than him, Angelo PANTANO, European junior champion in 2014. 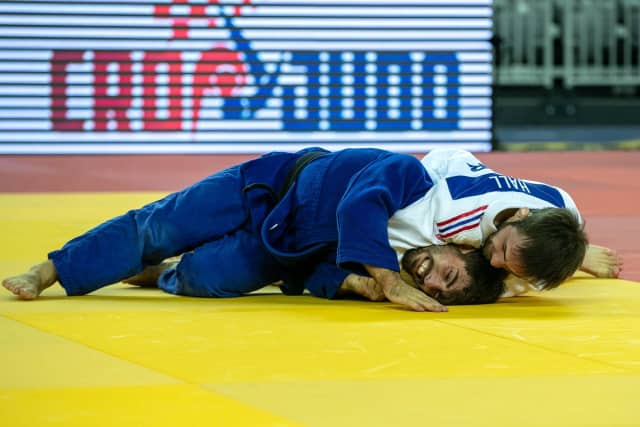 It was with a slow-motion hip movement that PANTANO scored a waza-ari to take the lead. Calmly but surely, HALL remained concentrated to eventually catch his opponent on the floor and push him to submit with a hadaka-jime for ippon and a beautiful first victory for him in a grand prix. 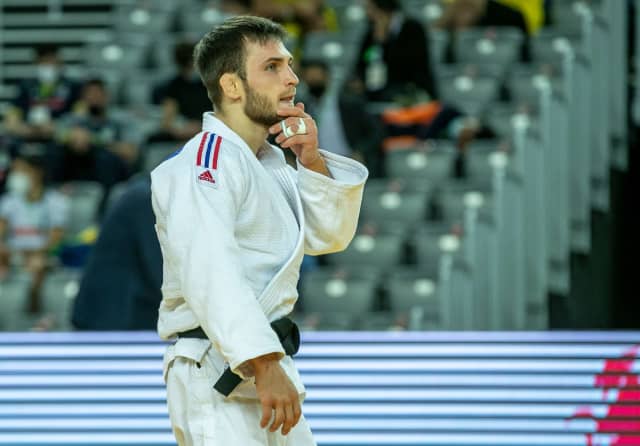 Jolan FLORIMONT, a two time gold medallist at continental open level, could be one of those promising French athletes who might shine in the future. In the first bronze medal contest he faced another athlete with no record on the World Judo Tour, David STARKEL of Slovenia. Even though FLORIMONT always seemed a little dominated and behind in terms of rhythm, he was actually the one who was the most dangerous and an opportunist to score two clear waza-ari to win his first grand prix medal.

The second bronze medal contest saw a veteran, compared to the other competitors of the category, Vincent LIMARE, facing the 20 year old Matan KOKOLAYEV of Israel. With one silver medal at the World Judo Masters and two Grand Slam medals to his name, LIMARE was a runner-up for the last Olympic qualification, missing out on a selection for Tokyo. Will this new cycle smile on the light weight Frenchman? Despite only a shido displayed on the scoreboard, the two athletes offered a really good match, full of action and acrobatic moves but that was not enough to discern a difference and a golden score period was necessary to determine the winner.

After 1 minute 47 seconds, LIMARE eventually found the solution to score a liberating waza-ari. This is the third medal in a grand prix for the French judoka and a really good comeback at the top level. 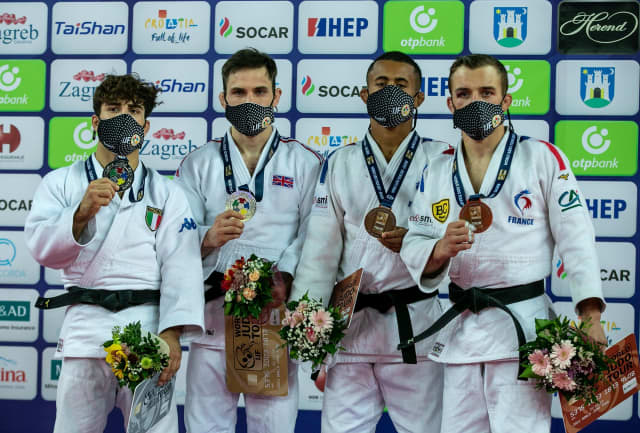 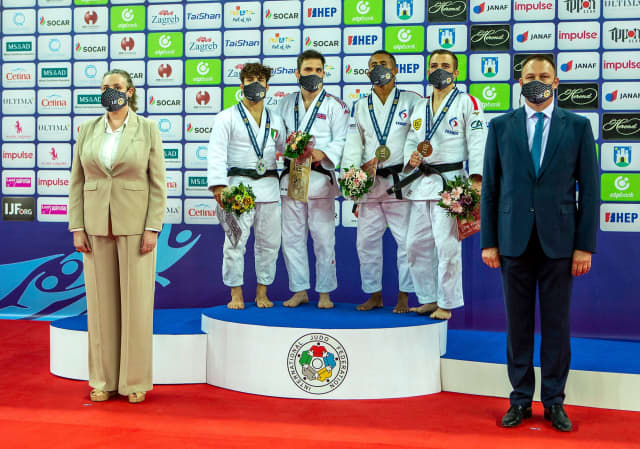 Astride GNETO is not unknown on the World Judo Tour as she already experienced climbing on to the podium eight times, especially notable that she did this twice on the World Judo Masters podium. Her opponent in the final didn't have such a prize list but showed great skill during the preliminary rounds. 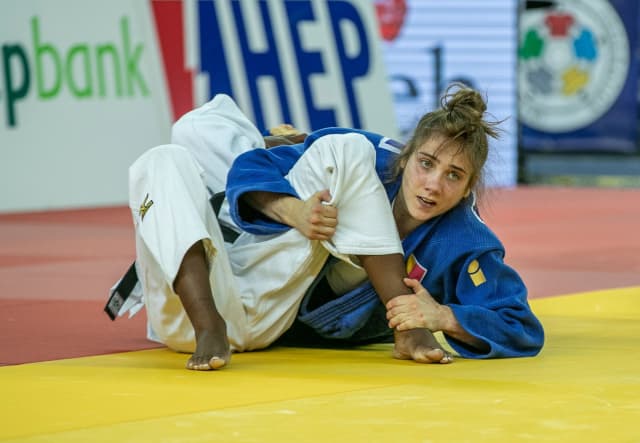 Amber RYHEUL wanted it more. In a match where neither of the two athletes were really capable of changing the rhythm to find opportunities, it was the Belgian who proved to be more confident. In the golden score period she finally pinned down her opponent to score ippon and win a first gold medal in a grand prix. 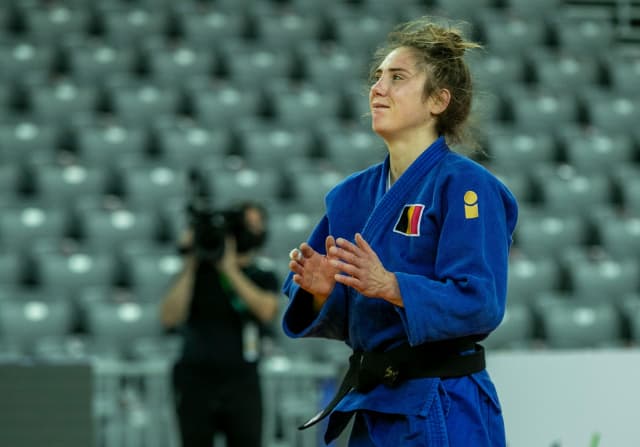 Youth Olympic Games bronze medallist Ana Viktorija PULJIZ (CRO) was the first representative of the host country in a position to win a medal. For the bronze medal contest she was opposed to the winner of the Zagreb European Open earlier this year, Izaskun BALLESTEROS GONZALEZ (ESP). After 26 seconds in golden score, the Spanish judoka was disqualified for a head dive, offering the first medal for the host nation to Ana Viktorija PULJIZ. 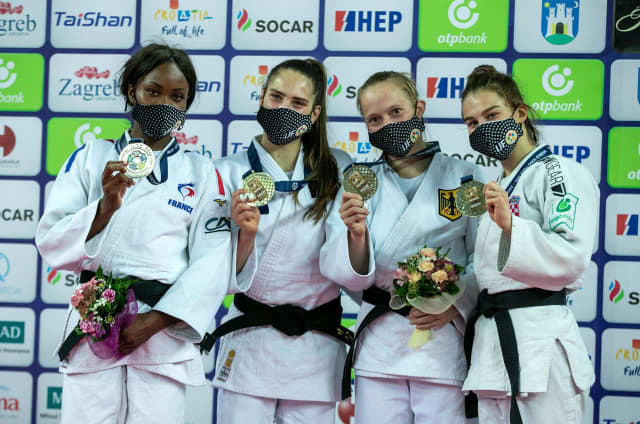 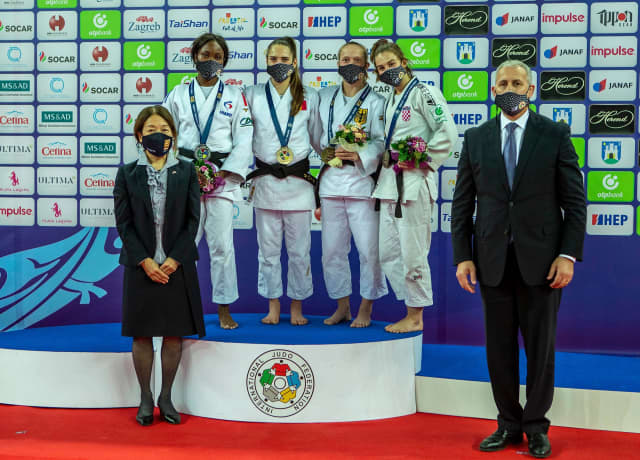 Medals and flowers were presented by Mr Mohammed Meridja, Education & Coaching Director of the International Judo Federation and H.E. Mrs. Misako Kaji, Ambassador of Japan to the Republic of Croatia

Number 18 in the World Ranking List, Denis VIERU, world championship bronze medallist, is one of those experienced athletes who came to Zagreb to re-launch their career. The Moldovan was among the outsiders for an Olympic medal in Tokyo but things did not go as he planned. Only 25 years old, VIERU now has a couple of years to prepare to perform in Paris. In the final he was opposed to Abula ABDULZHALILOV (RUS), already 30 and winner of two grand slams in his career. 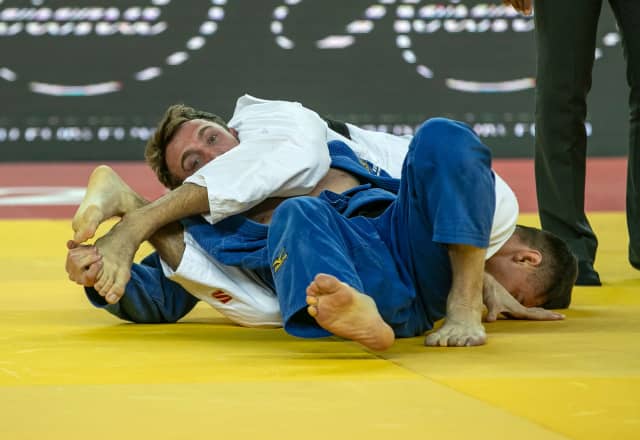 VIERU, with his beautiful judo style, waited for the ABDULZHALILOV storm to pass, controlling the attacks of his opponent with calmness, before concluding on the floor with a neat sankaku-jime attempt, followed by an immobilisation for ippon and a second grand prix gold medal. 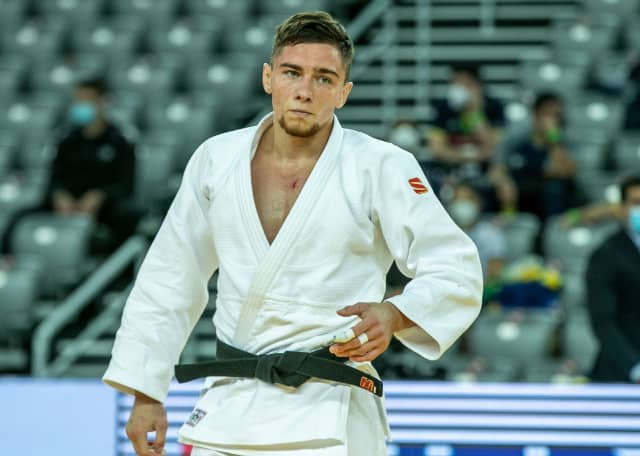 The first bronze medal contest saw Strahinja BUNCIC (SRB), fifth at the last European Championships and Karo MARANDIAN (UKR), second at the Warsaw Open in 2020, competing for a place on the podium. Both competitors were clearly lacking precision in their movements. Nevertheless, Karo MARANDIAN was able to score a waza-ari with ippon-ko-uchi-gake, that he protected until the end of the match, to win his first bronze medal in a grand prix.

The second bronze medal was disputed between Aram GRIGORYAN (RUS), fifth place at the Kazan Grand Slam this season and Daniel PEREZ ROMAN (ESP), fifth at the Osaka Grand Slam in 2020. Half way to the end, GRIGORYAN scored a first waza-ari with an o-soto-gari, followed a few seconds later by another throw, for ippon this time, to harvest a fifth medal in a grand prix. 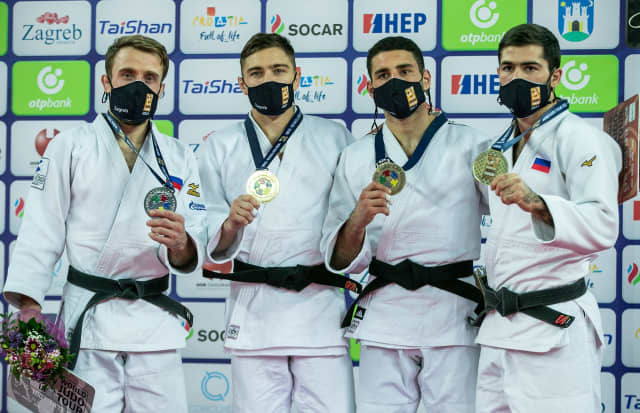 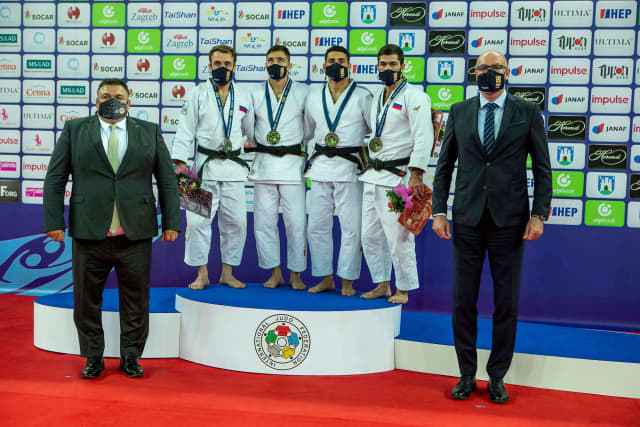 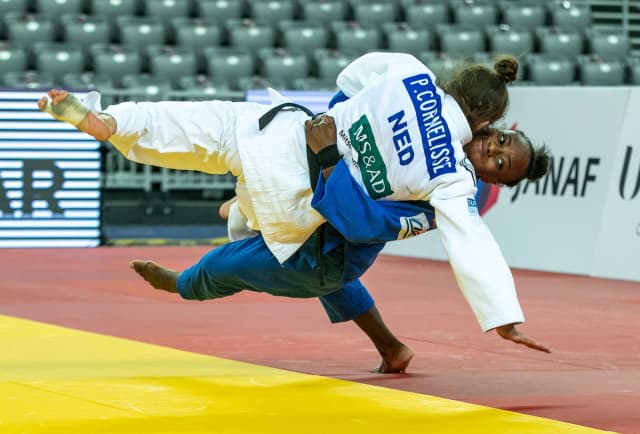 The last final of the day was also the shortest as GNETO, not upset by the defeat of her sister in the final of the lower category, propelled CORNELISSE to the ceiling with a superb counterattack to conclude the day with a second gold medal for team France. 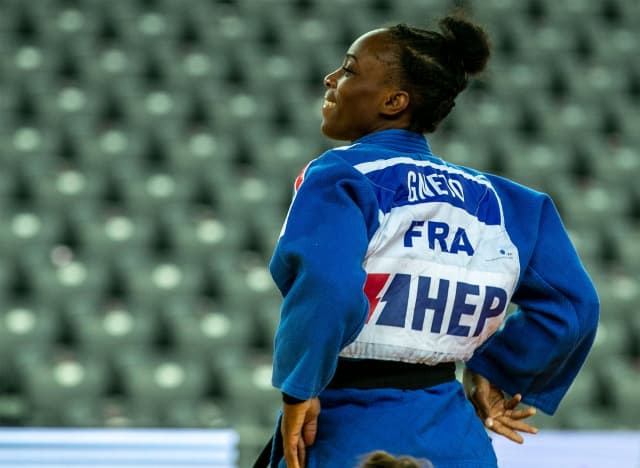 Junior European champion in 2016, Pauline STARKE (GER) reached the bronze medal contest against her teammate Caroline FRITZE (GER), bronze medallist at a continental open only so far. The latter didn't give any chance to her opponent, scoring twice with massive attacks, the first after only a few seconds for a waza-ari and the second with a massive right-handed morot-seoi-nage, this time for ippon.

Kosovo has become one of the major players in international judo, now with three Olympic champions in the country. Flaka LOXHA (KOS) might represent the new generation of great future champions for Kosovo. Today she reached the bronze medal contest against Kaja KAJZER (SLO), already the holder of six medals at grand prix level. After almost one minute of golden score, KAJZER notched up a waza-ari with a shoulder movement to win the bronze medal. Flaka LOXHA will have to wait a little more until she reaches the level of her illustrious teammates, but her time will come. 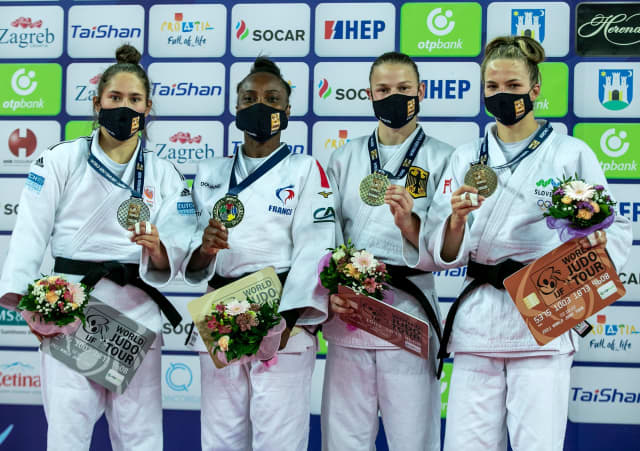 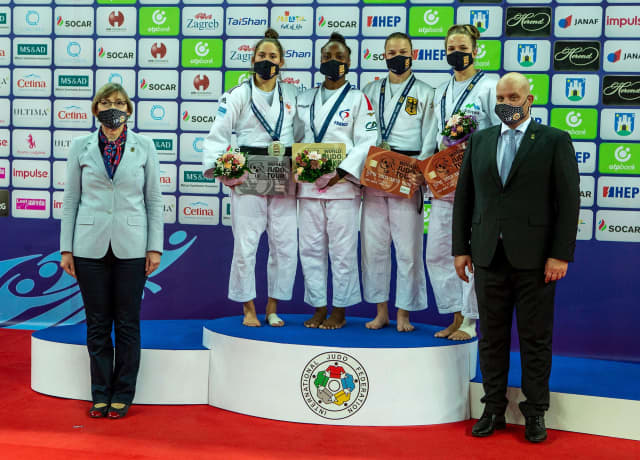