Veterans’ Worlds coming up: No Walk in the Park!

By Christian Pierre on 01. Oct 2019
Share
Comes October, it's that time again. Many judo veterans will grab their suitcase and hop on a plane to travel to Marrakesh, Morocco where this year’s IJF World Championship for Veterans will be hosted. 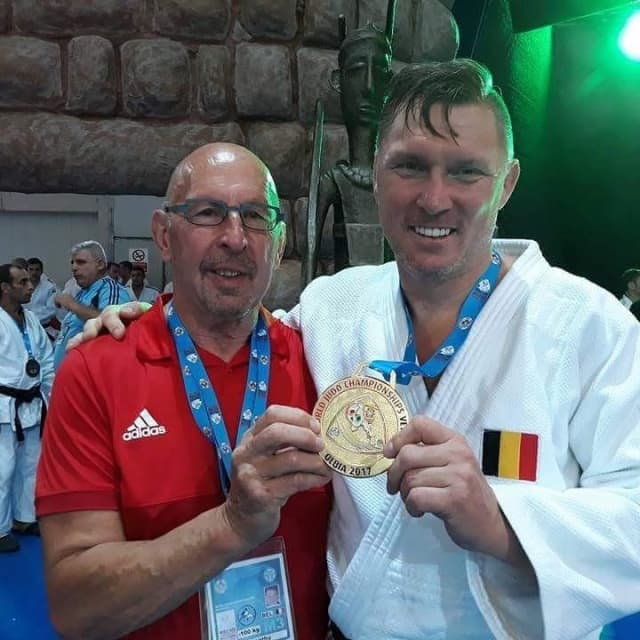 Tim Pedus, with his coach, pocketing gold in 2017

"A lot of judokas look forward to compete at ‘their’ Worlds and I am confident to say that 75% of the participants mount the tatami to win gold," says Belgian Tim Pedus. He should know because in 2017, Tim became World Champion -100 kg (category 40-45 years old) at the IJF Veterans Worlds in Olbia, Sardinia. The former elite athlete thus achieved his 2nd major title with the Veterans, after the European title in 2016. Tim does not in any way exclude a new campaign to defend his title, but not in Marrakesh. “If you go for gold in a category with many contenders, then such a World Championship campaign costs time, money and sacrifices that also involve your family. Consequently, not an annual enterprise for me. However, it is still itchy to aim for gold again in the near future,” explains the former World Champion. 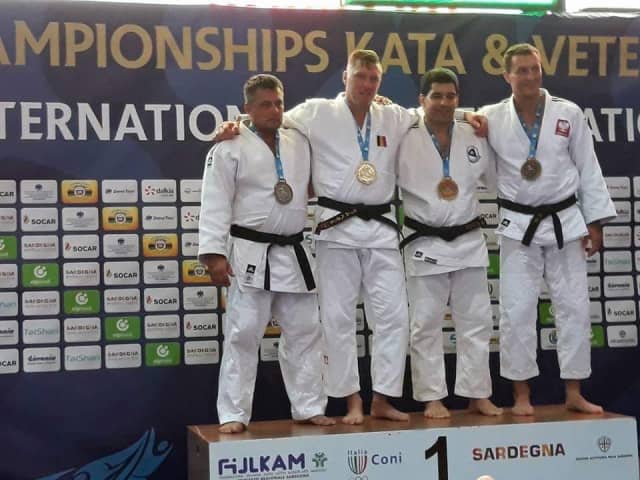 No Walk in the Park

The World Championship for Veterans is not a tourist trip. If you want to put a medal around your neck, you will have to arrive well prepared on the mat. "About ten years ago I came into contact with international veterans’ judo for the first time," says Tim Pedus. "The World Championship for Veterans took place in Schaerbeek, Belgium and I had just left the normal international circuit behind me. After all, you can only participate if you have been out of that circuit for two years. I then became third. I met opponents there who had just left the regular circuit also, so the competition level was pretty high. A few years later, I went as a coach to the Worlds in Paris. A good thing that I was not competing myself at the time because the majority of the participants were former champions who still mounted the tatami very well trained. Then I understood. You really have to be well prepared to reach the podium at the Veterans’ Worlds. I coached the entire tournament and I really enjoyed it, with some of my judokas finishing in 5th and 7th place. My passion for veterans’ judo really started there." 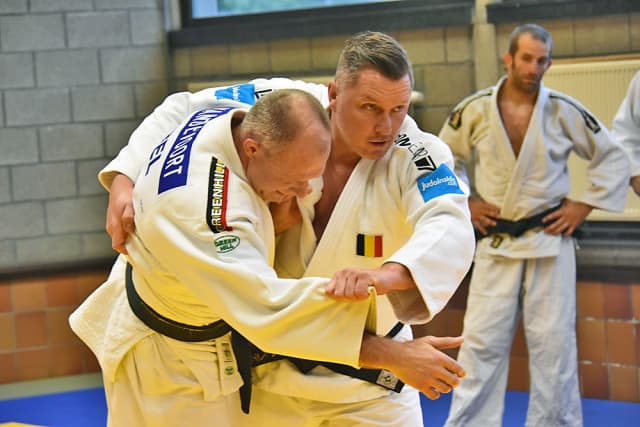 Tim Pedus at one of his specific trainings for veterans

In 2016, Tim was invited to participate in the European Championship for Veterans. That took place in Porits. “I started to prepare seriously and eventually became the European Champion. When I got the title, I initially had something like: I participated, it was nice, but that’s it. I'm quitting now.” However, when judo is in the heart ... “I have been practicing judo for 35 years and it kept itching to stay active at the same level. In 2016 the Veterans’ World Championship took place in the United States. I was well prepared, completely ready for the tournament.” Nevertheless, fate struck a week before his departure. “I was participating in an interclub tournament and injured the supraspinatus in my shoulder, which was half torn off. Notwithstanding, I still participated at the Worlds to finally finish 7th. A bit of a disappointment after all those preparations."

Meanwhile in Belgium, Tim leaves his old judo club and joins his current club JC Boortmeerbeek. Together with his coach Pierre, he starts again from scratch working towards the Worlds in 2017. “Everything went well in Sardinia. I already felt it in the morning: today is the day. It went smoothly. After the first bout I also had that feeling: the moment is now. In the past, I always wanted to win with ippon, but not anymore. After a successful semi-final, I struggled for the title and then I knew it couldn't go wrong anymore. Afterwards, the emotions ran high. Becoming World Champion, although with the Veterans, it is still an accomplishment if you consider how many judokas participate in that World Championship. You can still be proud. My preparation could count. I work at the Haacht brewery. For my strength training I reversed and manipulated those 50 liter beer barrels - such a full barrel weighs 65 kg. In the evening my judo training followed. Every day."

Support from your fans is also important. “If you want to practice elite sport, whether it's with the veterans or in the regular circuit, you have to have a strong partner behind you, and I do. After all, if you have a family, it is not always obvious to train 6 days out of 7, work, sleep, adapt your food regimen and rest. Hence, my wife Nathalie and the children also contributed so that I could get hold of these titles," says Tim. “I’m very grateful.” 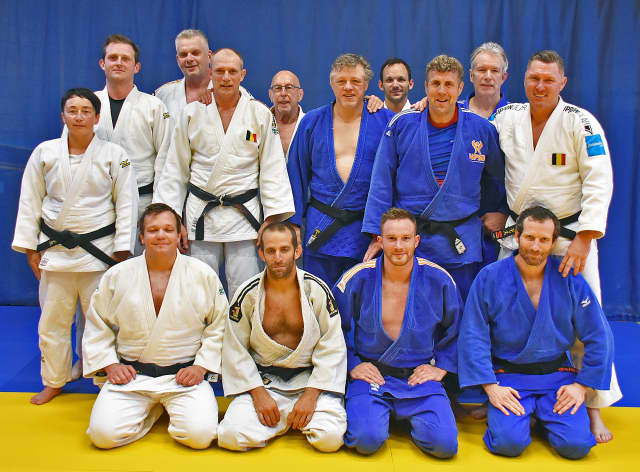 His World title was therefore the definitive impetus for Tim to organize a specific veteran judo training twice a month at his local club. “About ten to fifteen veterans are coming down here for that training. And it's getting more popular. They come from near and far. The training is divided into warming up, followed by an hour of technique and we finish with some randori. Everyone is motivated and that creates a great atmosphere," says Tim. "Learning other techniques is certainly a motivation for all participants. Technique has always been my strongest weapon. I try to put that into the sessions as much as possible so that it remains interesting for the participants to make the road trip to my club. Obviously, we keep it fun. Drinking a beer together afterwards is also an option,” he laughs.

The most important thing for Tim is that the veterans at his training sessions enjoy the practice and learn something. “Maybe they want to participate in a tournament or maybe they just come here to improve their technique, in the end it really doesn't matter to me. What matters to me is ‘Judo for life’. It's in my genes, I can’t lose it,” he smiles. Tim's children also practice judo. "I am not putting any pressure on them," says the 2017 World Champion. "Of course they think it's great that their Dad is a World Champion," the Belgian laughs. In the meanwhile, judo continues to be a well-discussed topic in the Pedus family home … by youngsters and veterans.