What motivates older athletes to start judo and to carry on in the Corona crisis?

Written by Nicolas Messner on 17. Nov 2020
Share
Claudia Kirchberger, a brown belt and late starter in judo, at the police sports club Königsbrunn, collected information about what motivates older athletes to start judo or to keep practising in this period of uncertainty around Corona virus. Everyone ages naturally, but that doesn't mean that they have to let go of sport or of fun. If you rest, you rust! In the Königsbrunn Police Sports Club, under the direction of qualified coach Johannes Daxbacher, a large group of adults has found judo to be the right sport to keep themselves physically and mentally fit, even under the difficult conditions of the pandemic. 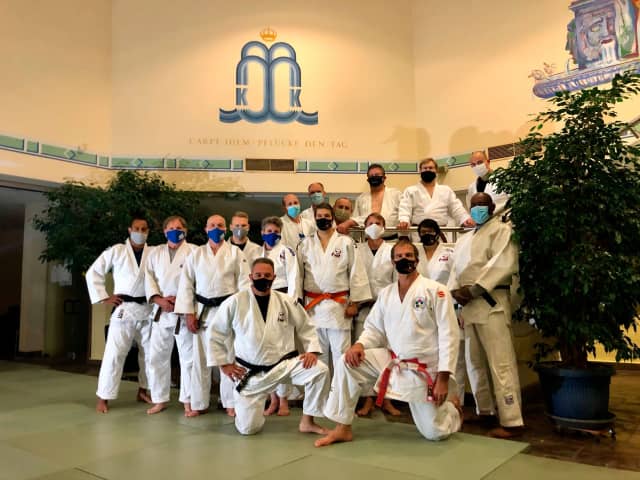 What is it that makes judo so fascinating? Is it its popular far eastern flair? The Japanese professor Jigoro Kano (1860-1938) developed the modern sport of judo from traditional self-defence. This martial art is a school for young and old, a school for life and an ideal prevention of health issues. In addition to intensive cardiovascular training, breathing and concentration exercises, physical mobility is maintained into old age. Balance, strength, endurance, speed and good responsiveness are the results of intensive training, while at the same time the whole organism is strengthened, says our doctor, Dr. Emine Lind.

Some people see martial arts as being dangerous exercises in order to mobilise aggression and violence, but judo is definitely non-violent. Judo strengthens self-assertion and self-confidence but with no hitting or kicking. It is a fine interplay between attack and defence, elegant movement and cultivated fighting, but it is also ideal for self-defence.

Judo is fun! In addition to having fun and enjoying exercise, values such as respect, politeness, focus, gratitude, self-control, willingness to cooperate, responsibility and helpfulness are conveyed; the basic requirements of our society for peaceful coexistence.

Marco Huber needs the very essence of the sport to strengthen his fighting spirit but also to switch off on a completely different level and emerge from the IT world he's involved in. As a physiotherapist, Kai Schwarzhoff still has the energy and the will to train in the evening. Almost 2 hours not to think about anything other than judo, to ignore all stress and to train with lots of nice people, “that's healthy,” says Stefan Wegmann, “we motivate each other, we are friends.”

Dr. Norbert Fuchs, now in his sixties, likes this Asian martial art because he feels physically and mentally much fitter through the holistic approach and the demanding and complex training with different partners. Flexibility, coordination and body control improve and this is important for a sense of balance and fall prevention, which comes into play especially at his age.

Can anyone try it out, even you? Yes, absolutely! Before you say ‘it's not for me,’ I would just go and join in and see what happens. Konstantin Derr and Alexander Fetsch first discovered judo with their children, as did their parents Bianca and Dr. Bernhard Olbricht. They saw how their children really had fun and worked out and wanted to take part in it too. There are so many fantastic examples here in Germany, like policeman Reiner Schmid whose children also started with judo and then he followed. He feels fit and safe for the daily challenges he has to face during his working. They were all curious, just tried it and found that everyone pays attention to their respective partners, so that everyone stays safe nothing. If you fall, you get up again, just like in normal life!

Of course, some parents have already done judo themselves in their childhood and adolescence, such as Volker Leitermeier, today a board member of the association or Günter Trautmann, an old judoka, marathon runner and today judo coach for school children in the West Elementary School, to name a few. The 50 year old Pablo, who learned judo in Cuba, found his judo family with the many judoka found in the police force.

Training has also taken place during the pandemic, not in the beloved dojo of the Police SV Königsbrunn, but outdoors at the Schuler-Hof, on a meadow that was always freshly mown. There were also judo mats and at the beginning we were allowed to do martial arts in groups of five. We were even able to train for the blue and brown belt tests. We all passed the exam successfully.

Since September, the usual training operations have continued with beginners and children. Since the dojo of the police is unfortunately not available for club operations during the pandemic, the organisers of the police sports club and the city of Königsbrunn have looked for and found alternative sports facilities and as we have always learned, older judoka and young competitors take turns using the tatami so that they can seek and find new approaches to judo, full of dedication, thirst for knowledge and curiosity.

Our coaches always have something new and interesting to offer and there is definitely no boredom in our club.

News
A First for Macedonia: Inaugural National Championship for Veterans