Written by Nicolas Messner on 17. Jun 2021
Share
For World Refugee Day, which takes place on 20th June, the judoka of the Judo for Peace South Africa programme led by Roberto Orlando and Sanda Aldass, member of the IJF Refugee Team, who is now also part of the team which will participate in the Olympic Games in Tokyo this summer, gathered to exchange accounts of their respective lives. 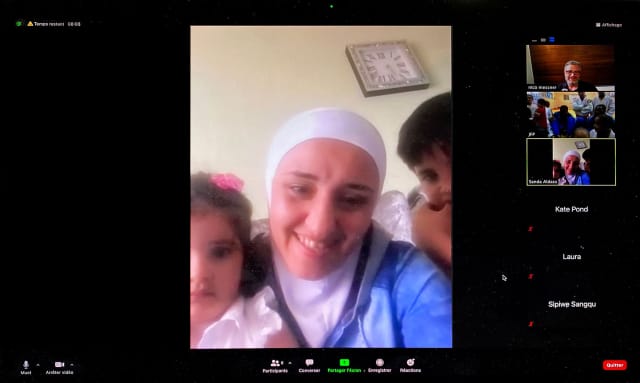 The distance was not an obstacle to the exchange, each on their side of the world, Sanda in the Netherlands, Nicolas Messner, Judo for Peace Director in France and judoka in Johannesburg, everyone was able to speak freely and come together around the values of judo.

If one had to retain a main message it would be Sanda’s, explaining to the young African judoka, "Nothing is easy in life, but when you really want it, you can. Never believe the people who tell you that it is impossible, because everything is possible. How many people did not believe that I could one day participate in the competitions of the World Judo Tour and even more in the Olympic Games and yet here I am in front of you and I can tell you that it is possible. Never give up. Believe in yourself. There is always hope. Do it, go for it and you will get there!"

Sanda's story, however, did not leave much room for hope at the beginning. She started judo at the age of seven and quickly developed a passion for the sport but she found herself embroiled in the civil war that still ravages her country, Syria. "I was already the mother of my eldest son and I was training a lot when our house was destroyed. We did not have the possibility, with my husband, to go to the parents of one or the other. We didn't have much hope. One day I was the witness of a shooting. I was with my son. There were dead and wounded people everywhere. It was horrible. That's when my husband and I decided to run away. We found ourselves in the Netherlands, after many adventures. We had nothing left."

Sanda explains it and it resonates perfectly in the ears of the young people in Johannesburg, as some have experienced similar situations before arriving in there, "Becoming a refugee is terribly difficult. It's as simple as that. When you leave home you only take the clothes you are wearing. You have to start all over again. My father, who was my best friend, passed away and I couldn't even say goodbye to him. I wanted to take him in my arms one last time. My mum, who stayed in Syria, I don't know if I will ever see her again." 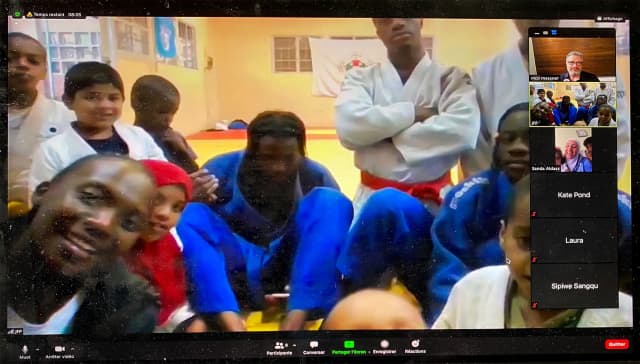 All these ordeals, which are impossible to summarise in a few words, have never slowed the young mother down. Now at the head of a larger family, since she has her eldest son of nine years old, a second boy, aged five and a youngest of two, she has reorganised her life around judo. "With my husband, we organised everything so that I could train. You know, training is like eating every day; it becomes a habit and a necessity."

“When the names of the Olympic team were announced, I remembered what I had thought about twenty years ago, when I saw someone win a medal in judo for the first time and that I had started practising the sport. I told myself that one day I also want to be there among the best and I am."

It might all sound like a monologue but the reunion was anything but an explanation of what Sanda went through. The questions were many from the young judoka. Speaking with someone who has lived so much and who remains positive and determined despite all the hardships is a great lesson in life, even if Sanda herself insisted that meeting, even virtually, Roberto's group, was a huge source of happiness and inspiration for her.

“To be a refugee is to remain a human being, despite everything, with rights. The International Judo Federation has offered me the possibility to assert my rights as an athlete. It is not always easy but nothing is! There is always a difficult side to any human adventure. Being a mother of three I have a lot of pressure but the good sides totally outweigh that. I have a very understanding family. Without them everything would be very complicated. For the moment I am concentrating on my career but I also want to give a lot to my children. One day I will teach them judo. I already teach them its values." 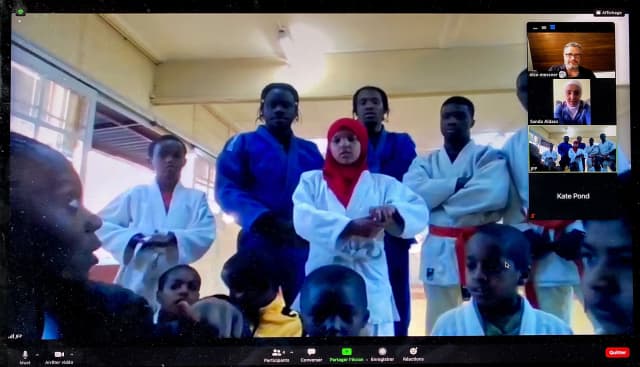 At the end of this beautiful 'family reunion' and beyond the terrestrial frontiers, Chris, 16 years old, a refugee from DRC said, "I am truly motivated and inspired by the story that was shared by Sanda. I learned that anything is possible as long as you put your mind to it. It was a lovely meeting."

18 year old Enock from DRC added, "Sanda is a strong woman who went through hard times in her country and left with nothing but she stayed positive and never gave up hope, even when she didn't have anything with her. Becoming a refugee in another country is very hard and her sharing that experience with me and the team really motivated me and I will always carry it with me to stay positive. There is always a way and many thanks to her for being with us today and all the best with the Olympics. I hope to see her some day. Together the stronger our judo will become."

Moses, 19 years old, also a refugee from DRC concluded, "Meeting with Sanda was very motivating. Her inspiring story really gives refugee judoka like us the will to not give up and to continue to chase our dreams."

What is absolutely breathtaking when listening to all those stories, from Sanda, but also the ones from Roberto's proteges, is that no matter what, there is and there should be hope. In their case, hope has a name: judo. For World Refugee Day let's hope that everyone can find their 'judo.’

Judo for Refugees
Judo: The Way to Freedom From Almost Inescapable Kabul