Written by Nicolas Messner on 19. Feb 2018
Share
In the course of the sporting season, Düsseldorf has become an unmissable event on the sports calendar of the International Judo Federation. Having been for many years the first Grand Prix of the year, located just after the Grand Slam of Paris, the event was promoted to the rank of Grand Slam in 2018, which gives it an even greater sporting value. As Olympic qualifying approaches (beginning in May at the Hohhot Grand Prix in China), many delegations will be present on the right bank of the Rhine from February 23-25 to collect valuable points that, if they are still not crucial to get a ticket for the Tokyo Games in 2020, they will be important to obtain a good world ranking, synonymous with more favorable draw in the preliminary rounds of the competitions on the World Judo Tour.

Above: The ISS Dome in Düsseldorf will accommodate the Grand Slam over the weekend

As the third competition in 2018, Düsseldorf will be highly contested as 500 athletes (305 men and 195 women) from 71 countries are registered. Many of the competitors present in Paris less than two weeks ago will be back in action on the weekend in a three-day competition format. The record participation and promotion in Grand Slam have also led the organisers to change venues, and the Düsseldorf Grand Slam will take place in the ISS Dome whose capacity exceeds 14,000 spectators. For the first time, the event will take place in a facility that is more used to hosting ice hockey matches or concerts, but for once it will vibrate under the impact of the ippons, for the greatest happiness of German and foreign fans.

A few days before the start of the competition, IJF President Marius Vizer said: "After the successful launch of the season in Tunis in January, and the great success of the recent Paris Grand Slam, we are happy to make a stop in Germany with whom we have been working for years. Düsseldorf was already one of the most beautiful stages of our world circuit and this year will be even more fantastic as athletes from all over the world sharpen their weapons to start the next Olympic qualifying that will be crucial for their career."

For Peter Frese, President of the German Judo Federation, it is a great honour to host this second Grand Slam of the season: "We are very proud to welcome the competitors from around the world to Düsseldorf and all the participants can expect a very good and beautiful organization. For several years, the number of spectators has been constantly increasing and it was essential for us to be able to welcome even more people in the best possible conditions. We are going to spend a weekend full of sporting emotions and we look forward to welcoming so many people. We are particularly motivated by the challenge that this represents. Our federation and all the volunteers involved will give the best of themselves." 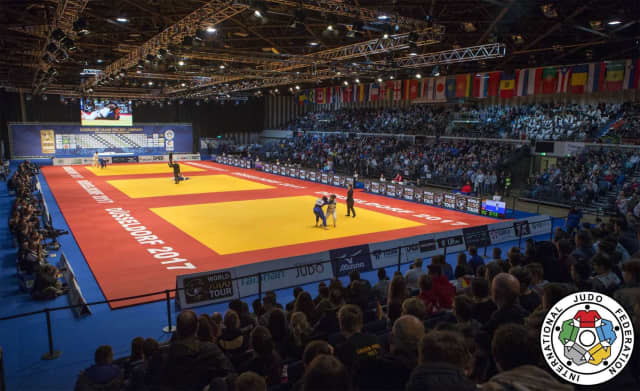 Above: The 2017 Düsseldorf Grand Prix was a success.
How will the 2018 Grand Slam look like?

There will be no less than 55 athletes ranked in the top 10 of the world ranking list, including 4 world numbers ones, who will be present in the capital of the state of North Rhine-Westphalia. But if some names had disappeared since the Rio Games, they will be followed with great attention since we will see for example the return to the competition of Olympic champions ONO Shohei (JPN) and BAKER Mashu (JPN).

By way of comparison, in 2017, the Düsseldorf Grand Prix had welcomed 344 athletes from 49 countries (see the full results of the 2017 Düsseldorf GP: https://judobase.ijf.org/#/competition/profile/1444/results) and saw the victory of a certain ABE Uta (JPN) who has just won the Paris Grand Slam and who, at the age of 17, is already a favourite of the 2020 Games. Last year, Georgia had particularly shone with the gold medals of Vazha MARGVELASHVILI and Beka GVINIASHVILI and Russia, which did not go to Paris ten days ago, will be present in force in Germany with no less than 22 athletes. To be followed since in 2017, the Russian delegation also obtained two gold medals (Denis IARTCEV -73kg and Aslan LAPPINAGOV -81kg) and many other stellar results. Brazil have embarked on a lengthy European tour and will engage 16 athletes, while France will line up 20 contenders for medals, Mongolia and Japan 19 or Algeria 18, just to name a few ones.

We look forward to seeing you in the coming days to learn more about the strengths and possible winners and to give you even more information on this exciting Düsseldorf Grand Slam.