By Jakhongir Toshpulatov, Gabriela Sabau on 25. Jan 2020
Share
Yes, it is still 6 months to go. Yes, it is reckless to do this now, but it is always interesting to get a professional opinion and, let’s say it, it is also fun. Therefore, while we still have some time to go until the biggest sporting event of this 4 years, we want to bring you expert opinions and thoughts on the outcome of Olympic Judo in Tokyo. 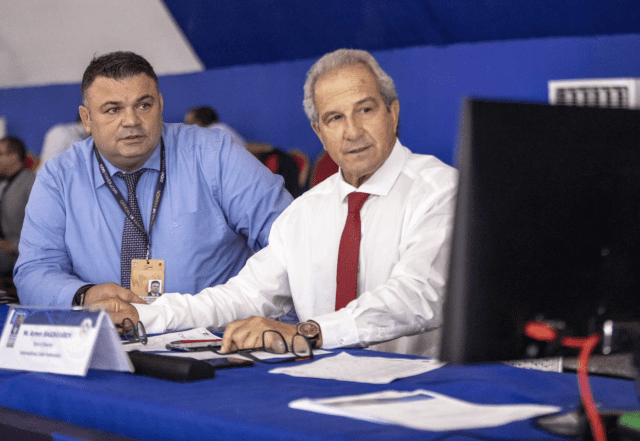 Mr. Daniel Lascau and Mr. Juan Carlos Barcos
“
Daria Bilodid, Ono Shohei and Teddy Rinner are three athletes I will highlight, but the most exciting part of the Olympics, sport and especially judo is, anyone of the big names can lose on that particular day.
Daniel Lascau

At each Tour event we will be asking Judo minds to discuss the current situation and predict the results for each category. Even though it is a long time to go and we do not even know who is going to be qualified, it is interesting to see how accurate predictions can be with the knowledge of our experts. Mr. Daniel Lascau, IJF Sport Director and Acting Refereeing Director will be our first spokesman, in Tel Aviv.

Mr. Lascau is the first person to offer predictions and with the target event still so far away, he spoke generally at first and was then brave enough to point out a few names for us. Are you excited to know these names?

Firstly, we received some statistical information. “One of the key points is, that around 25 countries will win medals. Traditionally around 10 medals go to Japan, 4-5 to France and the third top country is Russia, in terms of winning medals.” According to former world champion Mr. Lascau, there are also strong countries like South Korea and Italy who are likely to be in the mix.

The probability of getting a medal is bigger if the athlete has won a World Championships before the Olympics. In this case, winners of Budapest, Baku and Tokyo Worlds will have more chances of winning at the Games. However, there are categories where we have all of the top 10 athletes taking part and each of them is capable of earning a gold medal.

We should not forget, these are the Olympic Games. Everything is possible here and we should expect surprises. Experienced rostrum-dwellers Will have their moments, but there are newcomers too. We should expect a new name to become a superstar, maybe even more than just one.

Coming to the names, “I would like to put it this way, there are a few big names and it is quite hard to beat them. Daria Bilodid, Ono Shohei and Teddy Riner are three athletes I will highlight, but the most exciting part of the Olympics, sport and especially judo is, anyone of the big names can lose on that particular day.”

Talking about surprises of the Olympics, we asked about the biggest ones for Mr. Lascau. “London’s Olympics brought us Lasha Shavdatuashvili from Georgia and Fabio Basile was the surprise of the Games in Rio.”

Follow our predictions series and wait for the next one from Paris!