JUDO FOR THE WORLD: A FRENCH HISTORY

Written by Nicolas Messner on 08. Feb 2018
Share
Discover the last episode of the Judo for the World series dedicated to France. Last December the IJF team went to Strasbourg and Paris to discover the secrets of French Judo.

Among the nations that contribute the most in the world of judo, undoubtedly France has been playing an important role for decades. While judo was invented in Japan in 1882, by Master Jigoro Kano, it must be recognised that French judo has weighed in and still heavily weighs in a global context that is increasingly universal and competitive.

But what is the secret of French judo? How has it become a sport recognised and appreciated by more than 70 million inhabitants? How did its champions become heroes? Why is it impossible to walk 50 metres in the street without meeting someone who has done judo at least once in his life? In an attempt to answer these questions, the International Judo Federation has dedicated the last episode of its series 'Judo for the World' in the country of Voltaire and Hugo, or more exactly that of Riner and Andeol. 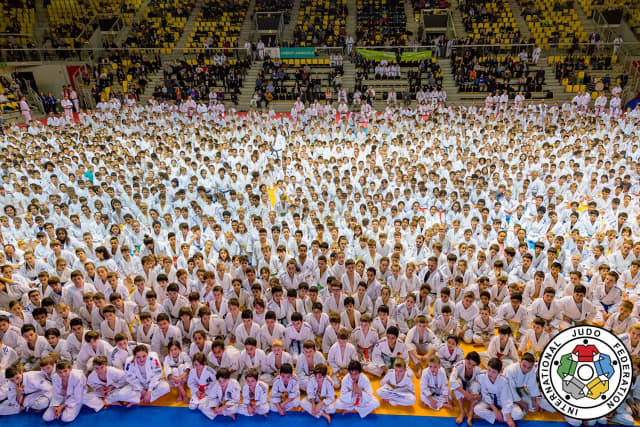 When a country has more than 600,000 practitioners, one can say that it is a major player in the sports movement and when the national territory is meshed with some 5,700 clubs, both in France and in the overseas territories, one can consider that the sport is omnipresent in the lives of the inhabitants.

Today everyone knows Teddy Riner and Emilie Andeol, to name only the last two French Olympic champions, among the twelve who won fourteen Olympic titles, not to mention the dozens of world and Olympic medallists who made history on the national and international judo landscape. They are real stars whose aura goes beyond the simple sport.

To realise this, you could have been present in Strasbourg, eastern France, in December 2017, to see more than 2,500 children accompanied by their judo teachers and their parents, to rush to the doors of a large local stadium, to meet the champions of the French national team. Whether it was for the little Leo, his teacher Bruno, his clubmates and those of all the Alsatian associations as well as those of the bordering regions, only one idea motivated them: to meet their favourite champions, to touch them, to speak to them, and if possible, do a randori (training match) with them.

If the eyes of the children were sparkling, those of the champions were just as much, because it is perhaps here that lies one of the secrets of the French judo: it is a factory of champions, a factory of high level competitors who aspire, one day to another, to share what themselves have received in their youth: the enthusiasm and love of the sport. 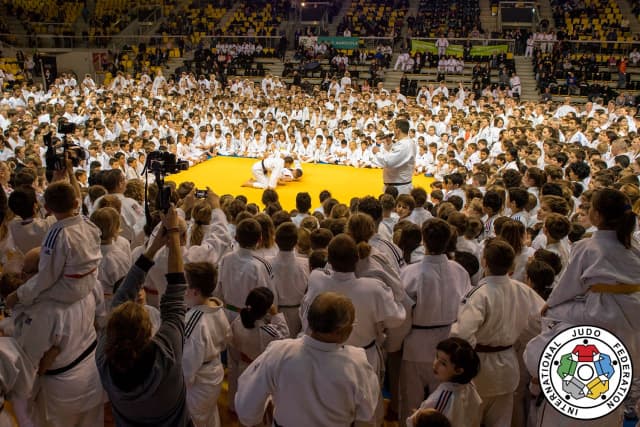 French judo is based on a permanent transmission of an indefectible passion from one generation to the next. In this permanent movement, one champion does not chase another, he motivates and inspires another.

For a whole day, the French squad shared their love of judo. In the morning, young people with intellectual disabilities, for whom sport is an incredible school of life, had the privilege of rubbing against Emilie, Automne and the male representatives of the national team; then in the afternoon it was a veritable human tide that swept over the thousands of square metres of tatami installed for the occasion. This great festival of French judo just represented what judo is in the country.

Introduced before the war, judo really made its appearance in France in the 30s, but it was under the impulse of a Japanese master, KAWAISHI, arrived in Paris in 1935, and under the leadership of Paul BONET-MAURY, President and founder of the French Judo Federation in December 1946, that the sport took off. A few years earlier, on April 20, 1939, Maurice COTTEREAU became the first French black belt, awarded by Professor KAWAISHI, while in 1943, Jean de HERDT won the first national championship. 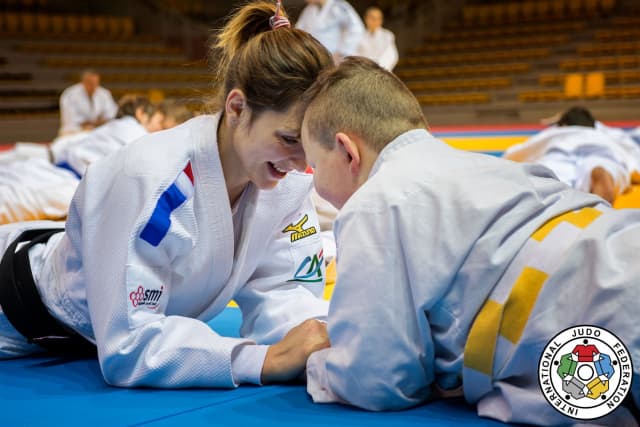 In the 1960s, as the sports movement became more and more important, France organized its first World Championship (1961), which saw the victory of a certain Anton GEESINK (NED) and judo was included in the program of the Tokyo Olympics in 1964, the French judoka already shone at the European level.

In 1972 they obtained their first Olympic medals with Jean-Jacques MOUNIER (light weight, 3rd), Jean-Paul COCHE (middle weight, 3rd) and Jean-Claude BRONDANI (open category, 3rd). Two years later, in 1975 in Vienna (Austria), Jean-Luc ROUGE won the first world title for his country; today he is the President of the French Judo Federation and the General Secretary of the IJF.

To list the champions who motivated, encouraged and inspired generations of judokas is a titanic work. However, one can not do without mentioning Thierry REY and Angelo PARISI, who for the first time registered the name of French athletes at the Olympus summit, it was in Moscow in 1980; that of Jocelyne TRIADOU who was the first female world champion in history (New York 1980), imitated in 1982 by Batrice RODRIGUEZ, Martine ROTTIER, Brigitte DEYDIER or Natalina LUPINO (Paris 1982). Ccile NOWAK and Cathy FLEURY were the first Olympic champions (Barcelona 1992). And it is also in Barcelona that a young athlete began to be recognized. It was David DOUILLET, third in Spain, who will become later, quadruple world champion and double Olympic champion and later Deputy and Minister of Sports. The path was all laid out for RESTOUX, DECOSSE, BOURAS, BENBOUDAOUD, EMANE ... and more recently to RINER and AGBEGNENOU and many others who are now the joy of the fans.

Yet judo in the land of France is also, and perhaps above all, a method of education, based on Japanese values as much as on the philosophy of human rights. Thus, as early as 1967, the French Federation published the "Progression Franaise", perfecting, for example, the system of coloured belts for young people invented in the United Kingdom, and later, it was in the offices of the FFJ that the moral code of judo that is still valid today in France as well as internationally was invented. A high-performance system of technical staff, continuous training of teachers, judo at school ... have made of judo the parents' favourite sport when it comes to educating their children. 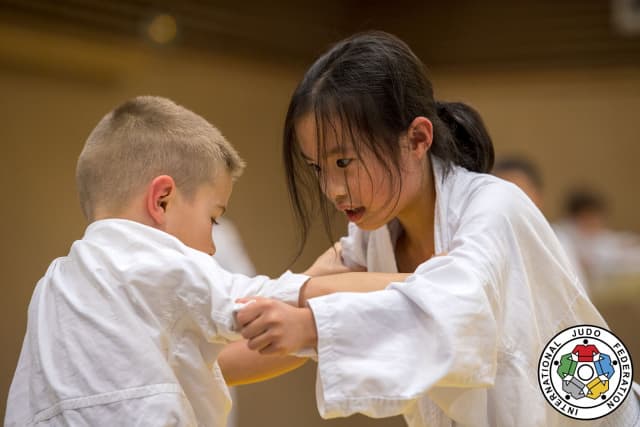 In 2018, the network of judo associations in France is unparalleled and there is always a club next door. These associations feed into high-level structures that regularly provide French teams with new recruits, all based on a pool of state-qualified teachers with a very high level of competence.

If you are not convinced, just push the doors of a club like the JKC Nogent-sur-Marne, which the IJF visited during the shooting of the film 'Judo for the World', and you will see the permanent commitment of its judo teacher who has been dedicating his life to the development of the practice. Alain VIDAL is every day on the tatami, whether with children, adults, competitors or simply judo lovers.

Judo is really a phenomenon in France. Driven by the locomotives that are the great champions, perfectly structured at all levels of the federal rocket, deeply anchored in the French educational process, great purveyors of international medals but also of moral values that apply as well in the small rural villages than in the big cities, judo has become a French story.

The International Judo Federation invites you to discover its latest film shot both in Strasbourg and in the Paris region, to meet the big names of sport as well as the judokas themselves and their teachers, in rural clubs as well as in city associations, with the exceptional presence of Teddy Riner, double Olympic champion and ten time world champion. 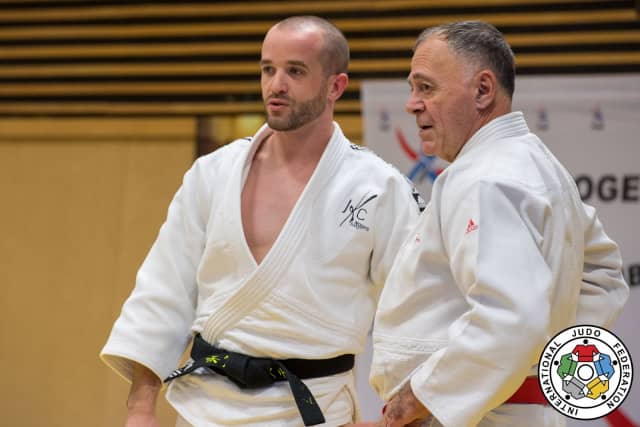