The second day of the Abu Dhabi Grand Slam 2017 belonged to ippon judo as Olympic and world medallists were in the frame for honours on Friday at the IPIC Arena.

The men's -73kg and -81kg categories and the women's -63kg and -70kg categories were all settled on day two as the four gold medals went to four different nations.

Abu Dhabi's Grand Slam will conclude on Saturday which coincides with #WorldJudoDay 2017. The International Judo Federation's annual day for judoka is a celebration of the sport and all its practitioners as judo's world governing body encourages all members of the judo community to organise a #WorldJudoDay activity such as a club competition, demonstration, Japanese lesson or a grading to mark the birthday of judo founder Jigoro Kano.

The theme in 2017 is Courage and Mr. KAWAGUCHI Takao, IJF Referee Commissioner, spoke to the IJF about #WorldJudoDay and the theme of Courage.

KAWAGUCHI, who won the 1972 Olympic Games and 1971 World Championships for Japan during an illustrious career, said: "I showed courage whenever I tied my belt. As a student, athlete and sensei. It's something you need to show every time you step on the tatami." 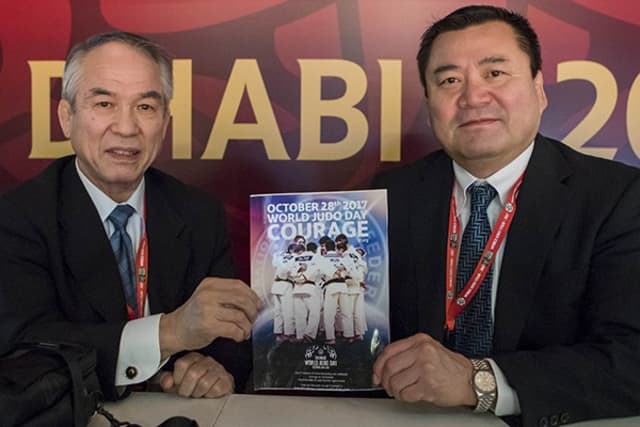 The final day of the Abu Dhabi Grand Slam will showcase the heavyweights as the giants of the tatami close out the competition in the men's -90kg, -100kg and +100kg categories and the women's -78kg and +78kg categories.

Hohhot Grand Prix bronze medallist Edwige GWEND (ITA) breathed new life in her career by winning Grand Slam gold for the first time. The 27-year-old Italian, who is ranked 16th in the world, last won IJF gold in 2015 at the Tashkent Grand Prix but managed to end her two-year wait to top the podium by beating the leading contenders in Abu Dhabi. Former Tokyo Grand Slam silver medallist GWEND met European u23 champion Lucy RENSHALL (GBR) in the final and restored their head-to-head record to level terms by picking up a hard-fought win in golden score when the 21-year-old from Merseyside was penalised for dropping. 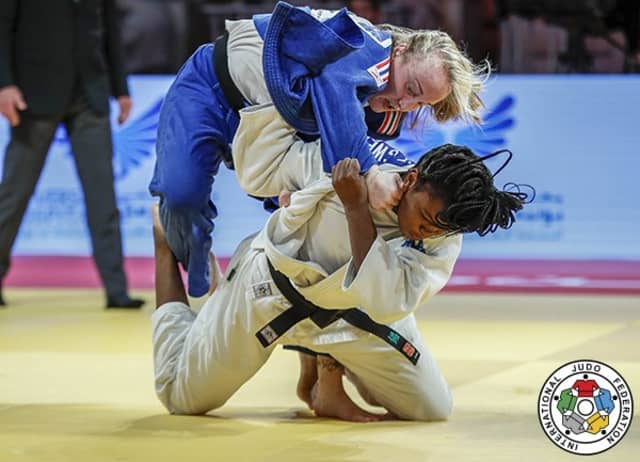 In the first semi-final Tashkent Grand Prix winner Kathrin UNTERWURZACHER (AUT) was outfought by a game GWEND who took the contest to the Austrian top seed and registered two unanswered waza-ari scores. In the second semi-final world bronze medallist Agata OZDOBA (POL) lost out to RENSHALL when the Polish judoka received her third shido to receive hansoku-make.

The first bronze medal contest was won by OZDOBA over 20-year-old two-time Junior European Cup winner Emily BURT (CAN). OZDOBA needed just 23 seconds to submit BURT, who was appearing in the final block at a Grand Slam for the firs time, for a quickfire start to the final block.

The second bronze medal was won by UNTERWURZACHER who held down Belgrade European Open winner Rotem SHOR (ISR) for 20 seconds and ippon. 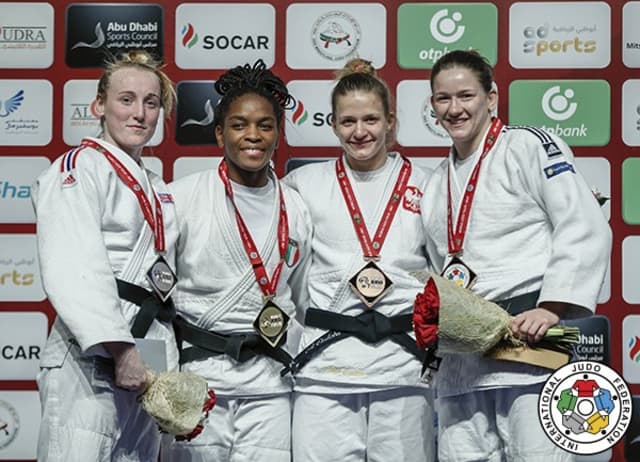 Zagreb Grand Prix bronze medallist Anna BERNHOLM (SWE) broke new ground on Friday when she claimed her first IJF Grand Slam gold medal. The Swede moved up from -63kg to -70kg last year and the move was largely questioned by judo aficionados who thought that she was better suited to the lighter weight. BERNHOLM saw her country's -63kg spot at the Rio 2016 Olympics go to Mia HERMANSSON and promptly set about making the transition to the heavier weight category with a run for Tokyo 2020 in mind. The world number 16 is now entering her prime and showed her progress in the category by defeating three-time World Judo Masters winner Kim POLLING (NED) to take gold in Abu Dhabi. After an entertaining four minutes the scoreboard was still untroubled with no scores or shidos registered. That changed after 31 seconds of golden score when BERNHOLM threw her world-class Dutch opponent with a hip throw for a waza-ari and the most memorable waza-ari of her thriving career. The victory meant that the judoka from Molkom became the first Swedish woman to win Grand Slam gold on the IJF World Judo Tour. 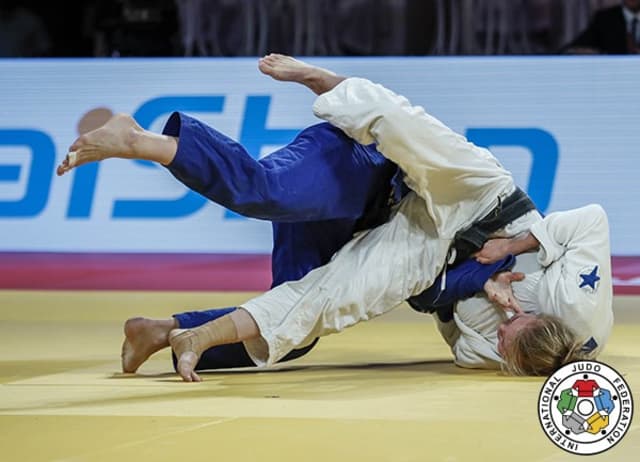 In the first semi-final Prague European Open bronze medallist Miriam BUTKEREIT (GER) tapped out to BERNHOLM from a juji-gatame after 30 seconds of golden score. In the second semi-final POLLING held down Rio 2016 Olympic bronze medallist Laura VARGAS-KOCH (GER) with a kuzure-yoko-shiho-gatame for ippon having led by two waza-ari before pinning down her German opponent. 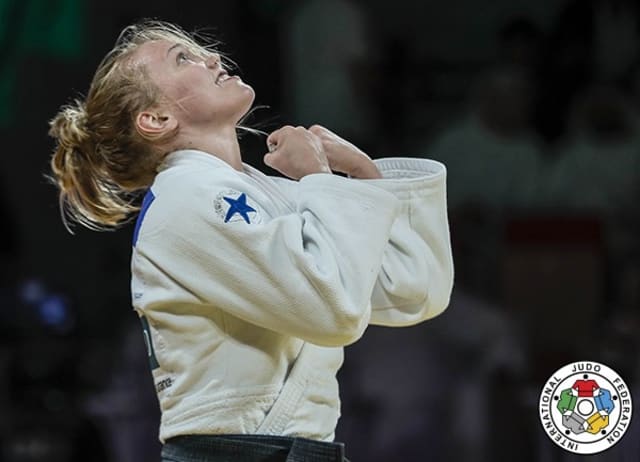 The first bronze medal was awarded to Rio 2016 Olympian Maria PORTELA (BRA) who scored three waza-ari against VARGAS KOCH before wrapping up a fine win on the ground with osaekomi-waza.

The second bronze medal was won by 23-year-old BUTKEREIT who defeated European u23 Championships winner GERCSAK Szabina (HUN). In her second appearance at a Grand Slam the German judoka gave a great account of herself against vastly more experienced judoka as she threw her opponent with an uchi-mata for a waza-ari and followed up with osaekomi to clinch bronze. 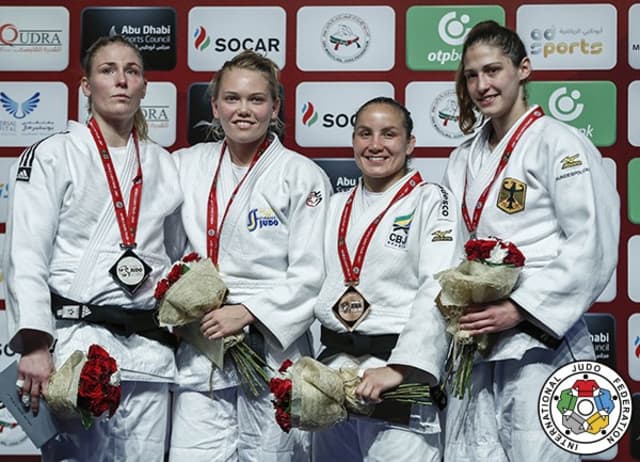 World bronze medallist GANBAATAR Odbayar (MGL) has now won four medals from his last four events and is arguably the form judoka in the weight category. GANBAATAR won Grand Slam gold for the first time in May before claiming his first Worlds Championships medal in August and has now returned to the top of a Grand Slam podium. GANBAATAR opposed European silver medallist Musa MOGUSHKOV (RUS) in the final and the Russian quickly fell behind to a waza-ari score. MOGUSHKOV looked troubled by a knee injury and after a committed gripping exchange which saw him lose his balance he had to tap out due to injury to concede the contest at the halfway point. 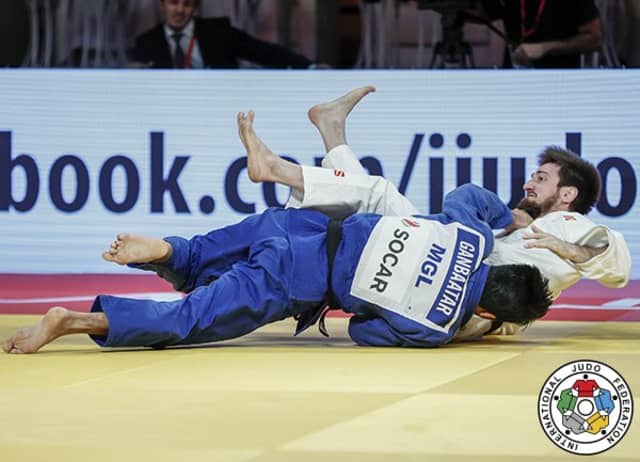 In the first semi-final MOGUSHKOV outlasted Cancun Grand Prix silver medallist Tohar BUTBUL (ISR) in golden score. A waza-ari from the Russian in added time settled it as MOGUSHKOV moved on to the gold medal contest. In the second semi-final GANBAATAR prevailed against Olympic bronze medallist Dirk VAN TICHELT (BEL) by a waza-ari score to continue his upward movement towards the summit of the -73kg rankings.

The first bronze medal was won by Olympic and world silver medallist Rustam ORUJOV (AZE) who threw VAN TICHELT with a harai-makikomi for ippon after 68 seconds. World number two ORUJOV endured a frustrating day until this point and came out fighting to guarantee his place on the podium after a fantastic ippon in the corner of the tatami.

The second bronze medal went to BUTBUL who sent Olympic champion Fabio BASILE (ITA) through the air and over for a waza-ari with a sumptuous sode-tsurikomi-goshi. BASILE was making his -73kg debut after two disappointing outings since Rio having suffered early eliminations at the Tokyo Grand Slam 2016 and the World Championships 2017. After 17 seconds of added time, BUTBUL launched his Italian adversary for the first and last score of the contest but the classy BASILE still showed potential on his first start in a new category and illustrated his class as he showed impeccable matside etiquette by bowing to the referee in addition to his opponent in a slow and meaningful manner despite missing out on a medal. 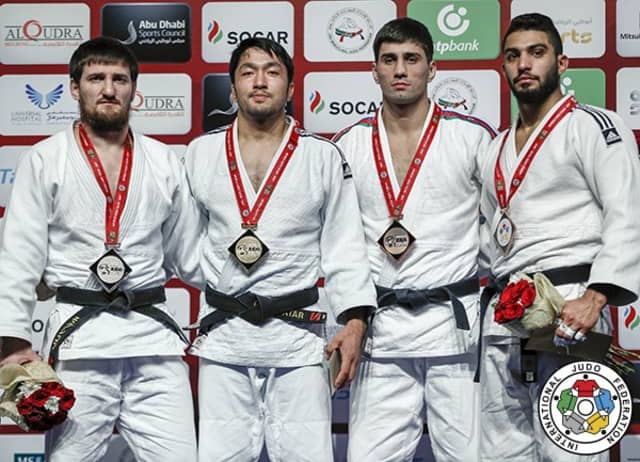 Paris Grand Slam winner Frank DE WIT (NED) became the Abu Dhabi Grand Slam gold medallist with a display of grit and guile as he conquered a star-powered weight category. The 21-year-old Dutchman, who is one of the promotional faces for his country's upcoming Grand Prix next month, prepared for his first home IJF event in best way possible by winning gold and making sure that he will be one of the top seeds in The Hague. Baku Grand Slam bronze medallist and world number 16 OTGONBAATAR Uuganbaatar (MGL) fell behind to a waza-ari and DE WIT applied the osaekomi for 20 seconds to finish undefeated in the U.A.E. 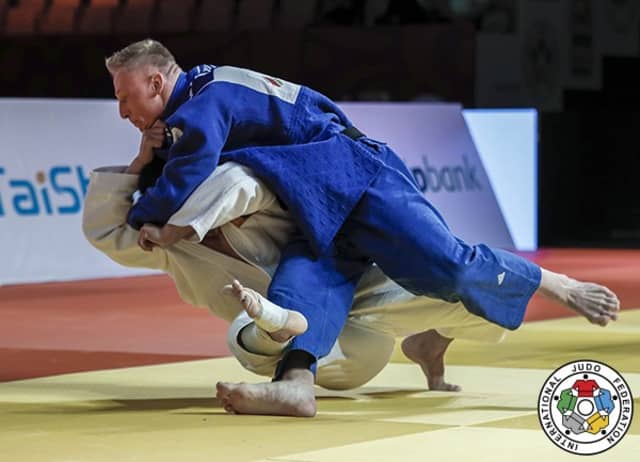 In the first semi-final OTGONBAATAR shaded teammate Tashkent Grand Prix silver medallist NYAMSUREN Dagvasuren (MGL) by a waza-ari score in a tight and committed contest where both men put their friendship on hold for four minutes. In the second semi-final DE WIT beat Ekaterinburg Grand Slam bronze medallist Zebeda REKHVIASHVILI (GEO) after 55 seconds of golden score by a waza-ari. 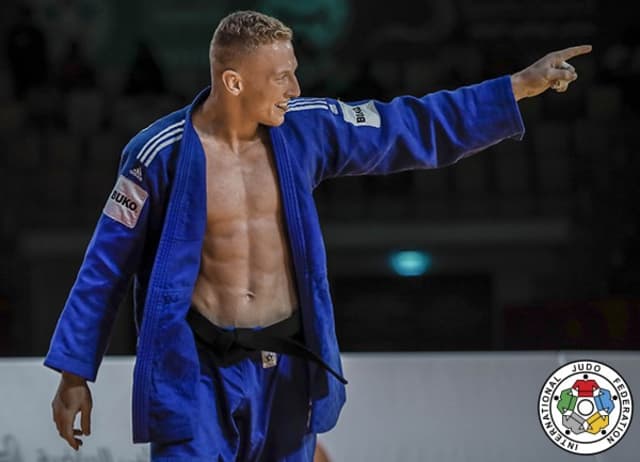 The first bronze medal was won by European champion Alan KHUBETSOV (RUS) who bested REKHVIASHVILI by the margin of two waza-ari scores. REKHVIASHVILI did not get going as KHUBETSOV asserted himself and was the only judoka who looked capable of scoring which he did without a comeback from his Georgian foe.

The second bronze medal went to world bronze medallist Saeid MOLLAEI (IRI) who saw off NYAMSUREN after two minutes and eight seconds of golden score with a ko-soto-gake which earned a match-winning waza-ari score. 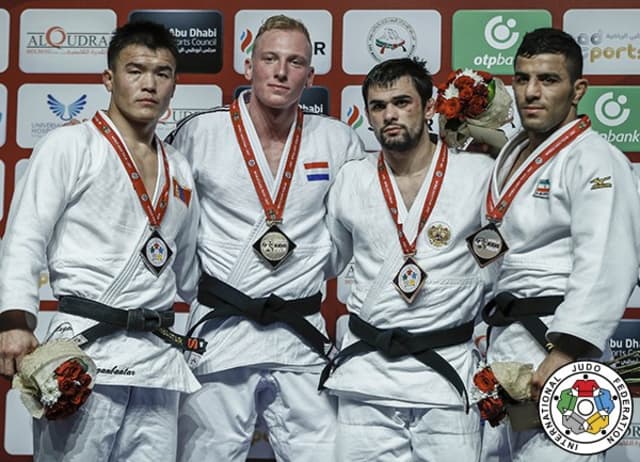