Written by Jo Crowley on 24. Mar 2021
Share
In 2004 I saw Iliadis become the youngest ever male Olympic champion and I witnessed Nomura-San achieve an unmatched 3rd Olympic gold medal. I saw the epic battle between Bönisch (GER) and triple Olympic medallist Kye (PRK) and I was bowled over by the omnipresent approachability of all the great judoka wandering around the Ano Liossia Arena.

My now friend Tsukada Maki fought and won in Greece and she defeated the current Mexican national coach Daima Beltran and I saw it. There were past champions, now legends and there were those destined to achieve great things in the years that followed. There were athletes who are now recognisable fixtures in the coaching chairs of the World Judo Tour and there was a feeling and a buzz that I will never forget.

Athens was my first Olympic Games, face-to-face. I was brought up surrounded by sport. My dad was a pre-Olympic runner with the Metropolitan Police in London, my step-dad a karateka who moved into pole-vaulting and now archery. We watched sport all the time and I had an innate respect for the work and commitment shown by all athletes across all sports. My childhood was peppered with the sound of weekend sport channels, Sunday morning ‘Grandstand,’ football pools, world athletics, talk of cricket from my umpire grandfather and so on and so on.

Nothing ever came close to the two weeks of immersion in the Olympic Games though. We watched and cheered and made family bets and we ate food from different nations and sometimes we painted our faces with flags, even when just sitting in our living room facing the telly.

There were never-ending phone calls, with family and friends repeating the ‘did you see that?’ and the ‘she broke another record’ on loop. Honestly, there has never been anything else to match the build up and the excitement of Olympic sport and in Athens I was able to soak up the whole beautiful atmosphere, first-hand, no tv, no phone calls, just sport and sunshine and bottomless mezze and I loved every second of it.

It was in Athens that I met, briefly, Toshihiko Koga. He was my first real judo hero and someone I talked about a lot when coaching at my young club, only a year old when I travelled to Greece. We tried those seoi-nages over and over again, the reverse entries and the single hand kuzushi and everything in between. We watched the Fighting Films DVD and marvelled at Koga’s creativity and humility and how different his judo was from anyone else’s.

Koga managed to be quiet but stand out. He was calm and hard-working but could still command the gaze of millions of people when plying his trade on the tatami. His influence cannot be ignored and his name now appears in everyone’s personal list of judo legends.

He signed my Olympic judo tickets that day, on the concourse of the arena. I’m not an autograph person, but it was Koga-San, the one and only Koga, that 70-something-kilo giant who could reach an All Japan final. He was smiley and respectful and his manner struck me as much as his judo.

His loss is felt like a dark wave around the world. Spectators, judoka, journalists, everyone feels this loss. Fifty-three is no age at all and to lose such a spirit from our judo community is crushing.

Friend and 4-time Olympian Karina Bryant (GBR) spoke angrily about this news, “It’s just such a massive loss. He was an inspiration for so many men and women, with his judo, so explosive and dynamic. When I was younger he was the main man, everyone wanted to do judo like him. Then after his fighting career he helped pass on his knowledge and was awesome all over again. It’s just such a shame; he had so much more to offer.”

It is only fitting that we have a passionate powerhouse of world judo hosting this weekend’s grand slam, in Tbilisi, Georgia. I will be looking out for the silent tributes of one-handed seoi-nages and reverse entry sode-tsuri-komi-goshi ippons. For each one I will doff my hat to the great man and be truly grateful for his contribution to modern judo. 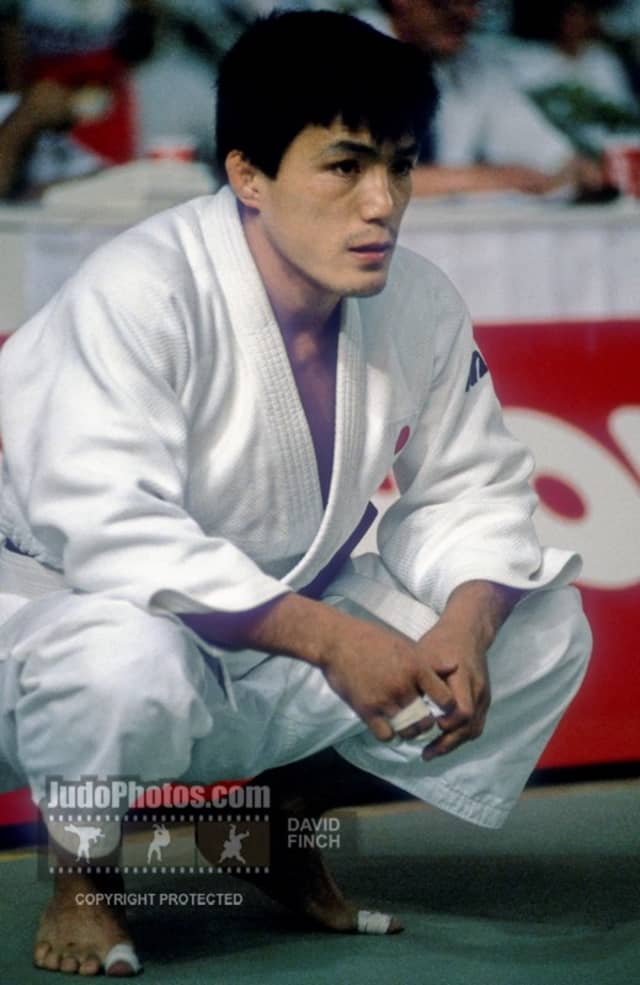