Covid-19 Has Nothing on Judo

Written by Jo Crowley on 24. Sep 2020
Share
Kazuno Judo, run by Allerdyce Fulton, is a new and energetic addition to Johannesburg’s sporting community. With an online and face-to-face presence and a real grounding in the benefits of judo and the values that envelop it, Kazuno look ready to take on the world. They’re professional and they’re fun and they’re pushing boundaries and barriers to ensure their members receive enriching experiences and a thorough judo education.

In March of this year Kazuno Judo had just opened its new doors. Allerdyce explained, “We had made the decision that Kazuno Judo would be a fixed dojo: a space open 6 days a week to any and every judoka who wanted to train. 2 Weeks after opening, the first Covid-19 case was reported in South Africa and the President announced a hard lockdown or Stage 5 lockdown, as they called it.”

Shutting their doors, to adhere to government guidance on managing the Covid-19 pandemic, was painful, even heart-breaking. No sports with physical contact until further notice! However, like any strong judoka in any shiai, Allerdyce and his team got to work!

“We decided to explore the option of using the internet as a tool to not only build our brand, which was in its infancy, but to fight fears and keep connected during this terrifying time. We rented out our jigsaw mats to some of our parents as we guessed they would need the set-up for training at home. We announced our intentions for online lessons. We also ramped up our social media videos, recording some ‘at home interval training’ exercises and judo fitness sequences. If we were not going to be allowed to do physical judo, we were going to use this time to stretch our muscles online and we would show our little judokas that we could still be together in judo, even if not in the dojo.

The online Zoom classes were doing really well, but we needed to add new elements in order to keep it interesting. Online classes meant muting all the participants and although we were together, virtually, it was still very one-sided. We launched elements like ‘The Weekly Challenge,’ where we set a fitness/strength challenge to our judoka and their parents and they had to post their completed challenges to our groups. We noticed that some judoka were joining the online classes from Ealing Judo Club in the UK too and then used what they had learned when heading up some of the classes for South African clubs. Online classes did not have to be limited to our own country. Why keep it local when we could Zoom with International judoka? How much judo knowledge was out there just waiting to be shared to a now, captivated audience, who were all looking to train online?

We contacted our friend and Ealing club member, Natasha Glassford, to see if she could possibly be a guest sensei for a day and we could open up the class to other South African clubs, with judoka ‘meeting’ other judoka from the other side of the country and even maybe an international audience.

Natasha led an amazing class. That same week double world medalist Nekoda Davis, also from Ealing Judo Club, announced that she would be opening herself up to taking online sessions and this is how we launched the ‘Judo Beyond Borders Masterclass’ series. Nekoda (GBR) was followed by Andrea Regis (ITA), Mihael Zgank (TUR), Taciana Cesar (GBS) and we even had our own Zack Piontek (RSA) run a masterclass. Roberto Orlando from the IJF Judo For Peace project helped source these champions, really boosting our programme. When would our judoka ever have had the chance to train with world class athletes from the comfort of their homes? 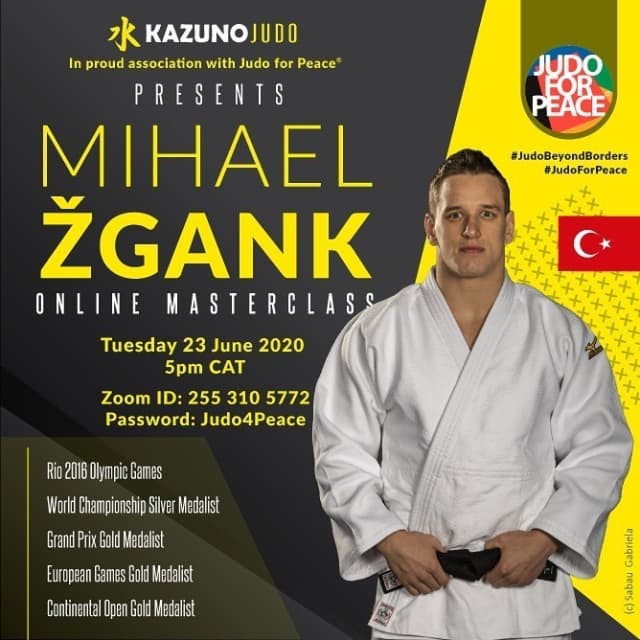 Covid may have closed some big doors, but never before has it opened up the world to us in such a major way. We were also struck by how many judo stars really wanted to give back to judo. They were so open and giving of their time and expertise. All our quests showed selflessness and displayed the essence of Jigoro Kano’s value system. They absolutely contributed to a better society. Our online masterclasses were offered at no cost and we often had 100 judoka or more from across South Africa and beyond.”

It is clear that Judo South Africa, as with so many federations, worked extremely hard, in line with government guidance, to obtain permissions to resume training. For dojos to be ready for re-opening under strict Covid regulations, certifications needed to be in place and the dojos had to comply. Allerdyce continued, “Obviously we are not able to have full contact, but it was amazing being able to open our doors and see feet on our mats again last week. Connecting with our families through masks and with social distancing being adhered to is so much better than online classes. They were great but they were a stop-gap!" 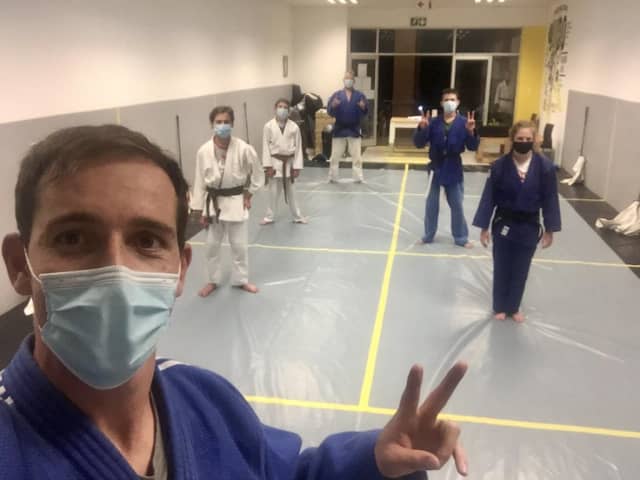 Masks and social distancing in place, but Kazuno Judo is open!

"We will make the best out of every level of lockdown, because there is something to be learnt from it all. Judo may forever be changed, but how many of us can see that so much of that change may be for the good? Judokas will always remember when they got to meet and train with their heroes, online. They will forever be thankful to be in a dojo, to be with their friends, training hard. They will never take full contact judo for granted, simply being able to say hello with more than a high five. They will forever remember how giving and kind even the best in the world can be, striving to be the same and give back when they are champions one day. Judo is a lifestyle and this does not stop once you leave the mat. It is a togetherness, regardless of physical space or distance. It is teaching those younger than you and it is perseverance and it is grit. So Covid-19 has nothing on judo because we will come back stronger and better than before, just a little more tech savvy.”

JUDO FOR PEACE
Nothing Can Stop Judo in South Africa