Düsseldorf Upgraded to a Grand Slam

Written by Nicolas Messner on 09. Dec 2017
Share
The Düsseldorf Grand Prix has been a major event on the world circuit for many years. Many of the big names in international judo came to compete on the German tatamis and many of them won a medal in the capital city of the German state of North Rhine-Westphalia before climbing the steps of the world and Olympic podiums. 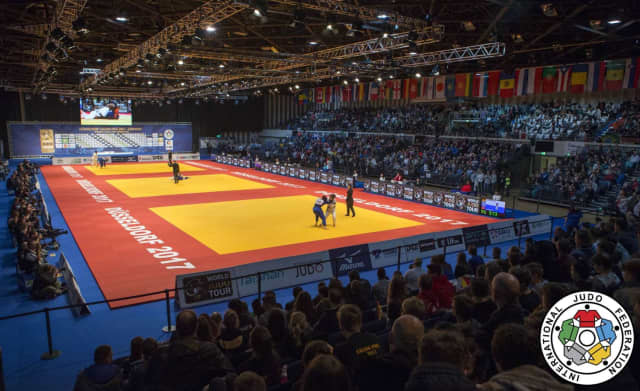 Placed at the beginning of the year just after the Grand Slam of Paris, the GP of Dusseldorf allows many delegations to launch their season and to chain competitions of top world level and geographically close to each other.

After several years of good and loyal service, the Dusseldorf Grand Prix is gaining momentum since in 2018 it will be upgraded to a Grand Slam, allowing to award many points for the world ranking. Thus Dusseldorf which is already known as an international business and financial centre, renowned for its fashion and trade fairs, will become for a few days the world judo capital.

In February 2018, the Olympic qualification period will not have started yet (start on May 2018), but the Grand Slam of Dusseldorf which will take place from the 23rd to the 25th of the month, will undoubtedly attract the elite of the international judo in the best conditions.

Mr. Peter FRESE, President of the German Judo Federation declared: "We are very happy about the enhancement of our Grand Prix to being a Grand Slam. In a certain way, this can also be seen as an appreciation of the work we have been doing in the last years. Now it's time for everyone of us to make sure that the first Grand Slam in Germany will be a thorough success and will make the ISS Dome in Dsseldorf rock from the 23rd to the 25th of February, 2018."

Mr. Reinhard NIMZ, general secretary of the German Judo Federation said: "For us, the German Judo-Federation, is it a great honor to host this competition in Germany. Next year we will be a part of the Grand Slam Series and we are one of few cities in the world, which organize this event. This upgrate (Grand Prix to Grand Slam) is a big appreciation and compliment for our work in Dsseldorf over the last few years.

As the 2018 edition of the World Championships Individual and Teams will be held in the city of Baku, Azerbaijan, from September 20 to 27, the annual Baku grand Slam won't be organized in 2018, but with the upgrade of Dusseldorf Grand Prix to a Grand Slam, the IJF will still organize four Grand Slams in 2018 (Paris, Dusseldorf, Ekaterinburg, Tokyo).