Written by Nicolas Messner on 01. Apr 2021
Share
While the health protocol is, rightly, at the heart of all concerns, so that all participants in the events of the World Judo Tour can compete in optimum health and safety conditions, on the eve of the first day of competition in Antalya, the action took place far from the tatami and it was nice to see. With the strictest respect for procedures, this little parenthesis of normality was really enjoyable. 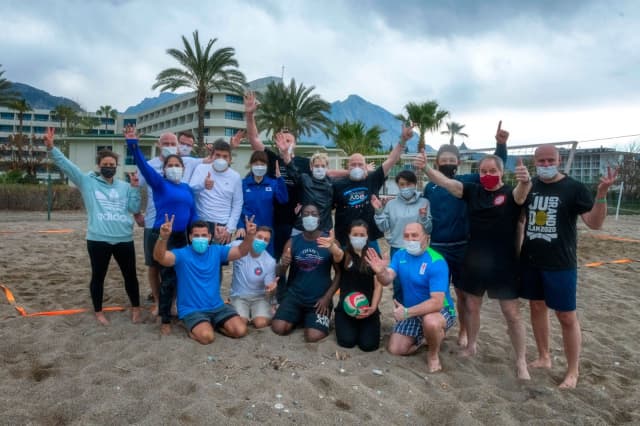 For the early risers, you had to be on the beach at the foot of the bubble hotel housing all the delegations and officials, to hear the cries of joy and bursts of laughter, to understand, that an important competition was taking place in the presence of sports legends. As we approached, we discovered that the actors of this pure moment of sport were none other than the group of referees who will officiate throughout the weekend and who will also be present in Tokyo this summer, accompanied by the refereeing supervisors and a few IJF staff.

Beyond the pleasure of meeting for a moment, sharing passion for sport and sweating a little before focusing on the Grand Slam, the fiercely contested beach volleyball game, held under a threatening sky, had another objective, that of creating the most useful and necessary conditions for the construction of a group spirit which will flow in a few months time, under the pressure of the Olympic Games.

For more than an hour, this pressure was still far away however. Several of the participants of this summit meeting told us of their immense pleasure and the least we can say is that the group spirit is already well developed because all responded in unison and shared the same feelings. 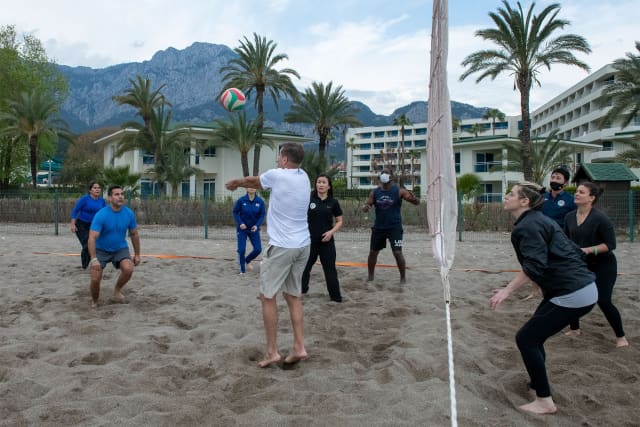 "It is not the first time that we organise this kind of friendly, sporting competition between the referees. We started several years ago. On the other hand, over these last months things were obviously more complicated. We were happy to find again, here in Antalya, the conditions of such a moment. While we are isolated in our bubble, in a hotel which is occupied only by participants of the grand slam, who underwent numerous PCR tests and based on the fact that we respect the health instructions to the letter, here we could find ourselves on a private beach and outdoors to do a little sport in a really excellent atmosphere,” some relay to us. 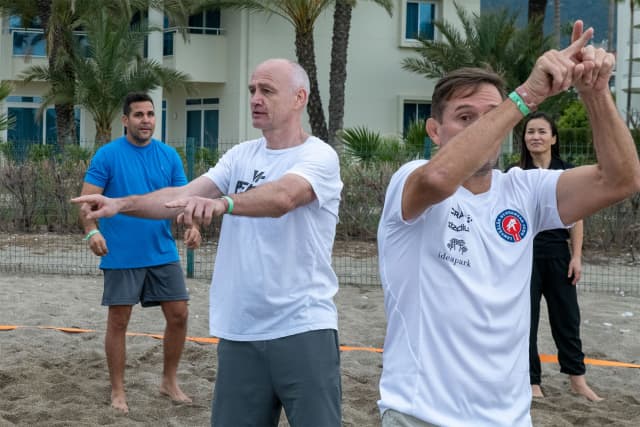 For the others, “A few years ago, we started only with the referees. We needed these moments of conviviality. Throughout the duration of a competition we have to be very focused, but we are also athletes and what could be better than a little sweat to decompress and be able to concentrate better later. We spend a lot of time together on the world tour. It's important that we have a good atmosphere between us."

But the beaches of Antalya are not reserved only for referees, other personalities of judo also dropped the suit and tie for a more sporty outfit, “Yesterday we were particularly happy to see that we were joined by the refereeing supervisors as well as members of the IJF staff. For us, quite honestly, it was a little mind-blowing to see a Neil Adams or an Udo Quellmalz playing with us. They have been our heroes on the tatami, winning the biggest titles and there they were playing with us as equals. We had world champions and Olympic champions on our team."

Admiration is not feigned. It did not prevent all the participants from having fun, from laughing, while remaining in the back of their minds professional referees of the world circuit, “Yes, it's true, it was a friendly match, very friendly, but we are all athletes at heart and referees too. So we can't help but call for video refereeing, even when there is none.” Warm giggling ensued. “We announce a nice ippon when one of us dives trying to catch the ball. It's part of our nature. We can't help it. We do it even when we're eating."

If all the points were disputed, in the end there was no winner, or more exactly the winner was group cohesion, friendship and the ability to respect each other, “It's impressive when you think about it. On the sand, there were all the continents represented and yet there were not twenty individuals, but a tight-knit and united group, a group which this summer will be together to officiate the Games." 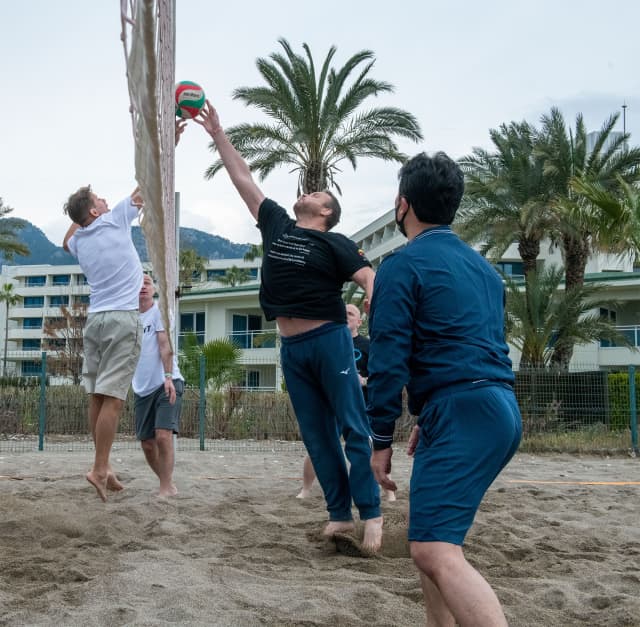 Referees and supervisors are aware of the burden they carry. After the World Championships and the Olympic Games we will remember the names of the winners, but it would be good if we also remember the men and women in black on the tatami. They are human beings passionate about judo, who often live far from their families, but who within the group have found more than play partners; they have found a second family.