Written by Jo Crowley on 13. Jun 2021
Photographs by Emanuele Di Feliciantonio
Share
Throughout this World Judo Championships Hungary 2021, we have been treated to a constant commentary in the live stream, keeping every contest on every mat covered, with discussion, analysis, emotion and general reaction. Commentators are an important part of any sports event and we are used to this in football, athletics and many other televised or live-streamed sports.

However, this is judo! We often mention our judo family and every day we see new ways to illustrate what that means. With our commentating team we can hear it too. They aren’t sports journalists or pundits. They are judoka, the highest level of judoka there is and what they bring to us is a vast bank of experience and knowledge.

It is something quite extraordinary to fully digest that our coverage is delivered almost exclusively by world champions. They have been recruited for exactly that reason. Keeping them and their decades of immersion in judo inside the community is valuable and contributes immeasurably to the quality of presentation every time we invite the world to join us on the international stage. 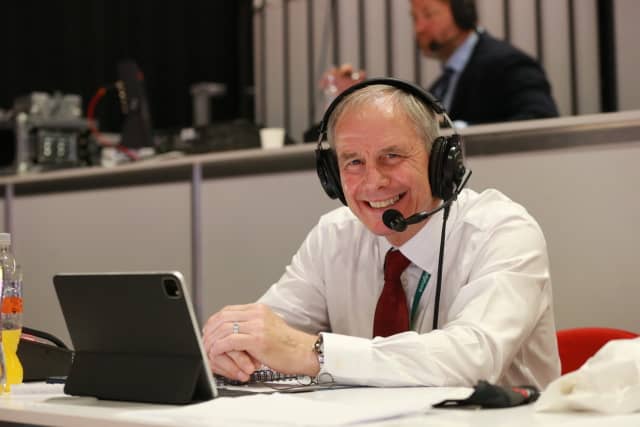 Neil Adams at work in Budapest

“I’ve been commentating in various forms for many years, but came to the IJF in 2009 as the World Judo Tour was established, so I had the honour of commentating at the first event of the Tour.

What I love about it is that it’s an expression of how I feel about judo. I commentate from the heart. Getting it right and not being too controversial is the challenge. An educated opinion is worth giving. We hear a lot of commentators with opinions, in other sports, but not all of them are educated. As a Referee Supervisor I realise how hard it is to make the decisions our referees do, at such a pace and so I feel I can help to pull all the aspects of competition judo together for the judo spectators.

It’s a role that has real variety. When I work alone there is a different energy when compared with working with a partner. Then the energy changes and it can be a challenge to align the different timing and rhythms, but our team is getting closer and closer at every event. We work hard to make sure we work in sync.” 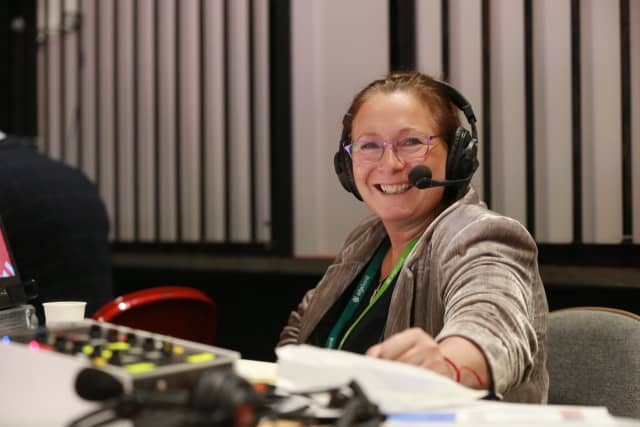 Loretta with her ever-present grin, happy at the microphone

“I started in 2016 at the Paris Grand Slam. What an introduction that was! I’m passionate about the sport and I feel like I have the best seat in the house, witnessing all the emotions of it and applying my knowledge to that.

I always think back to my time as an international athlete, or my experiences as a national coach, transferring all of that to the general public, giving them an insight. I hope I always do that.

Within the team it’s always great. The challenges can be that you want to see all the matches but we miss a lot as we have to stay so focused on our mat. Sometimes we don’t get to see all the pieces of the puzzle. Trying to follow the progression of the day is a challenge, but working together makes that better and fills in the gaps. We get it all between us.

It’s hard for me to not be too emotionally involved but that’s probably both our strength and our greatest challenge. It’s strange to re-engage with old feelings as a coach or athlete. Intensity grows and we want to leap up and down but I’m sure lots of our emotion comes through even when we try to hide it. Maybe that’s what the judo community likes to hear! It’s funny when there’s something really spectacular or emotional and I have to try to keep my hands off my colleagues because I’m so involved with the contests. I tend to grip them as I get so involved with what’s happening on the tatami. Old habits die hard!” 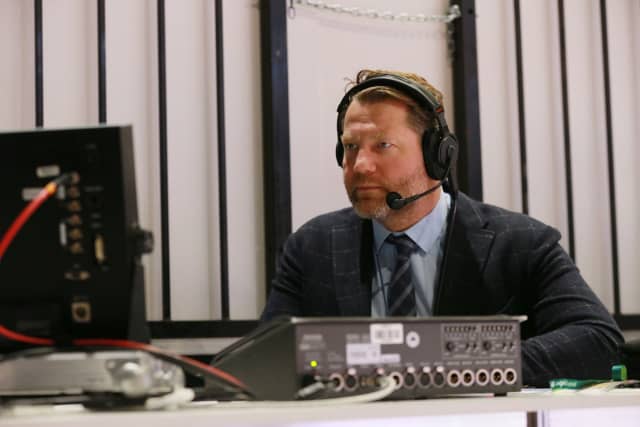 Dennis Van Der Geest focused on the contests in Hungary

“I had been an announcer on the World Judo Tour for a couple of years before I started in 2019, at the Worlds in Japan, as a commentator.

What’s nice for me is that I’m sitting with Neil Adams doing commentary. Neil doesn’t believe it when I say it, but it’s true. When I was growing up I was watching all the videos with my brother and listening to Neil. Neil’s voice is one I’ve always been familiar with and now I’m sitting here in the IJF family and I’m at a world championship, where we both competed many times. I’m enjoying that.

It can be a little tough for me because I’m not commentating in my native language. When I’m really excited it goes so fast and I have to translate from Dutch to English and in judo I don’t really have time for that. The things I want to say need to be expressed in English, so I’m working to speed up and be able to say what I want.”

Head Referee Director, Daniel Lascau is himself a world champion, winning gold in 1991 and he is very clear about the value all our world champions add to the events.

“In order to have a good judo product and present the best sport and best image, both on the mat and outside of it, the IJF recruited 3 world champions as commentators. Taking into consideration that they can understand the tiniest details of the contest and offer a very close perspective to the public about what’s happening on the mat, we are very happy to have such champions on the live broadcast, working alongside the Referee Supervisors." 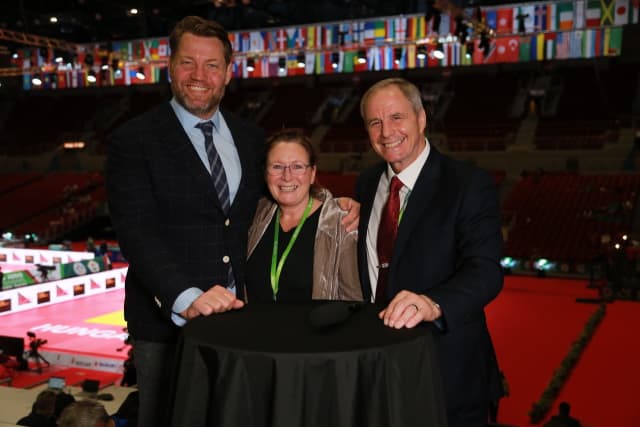 Dennis, Loretta and Neil at the beginning of day 8 in Budapest

"Here the IJF show the integration of former champions into new working areas, after their competitive career. Of course we have the same background and so the discussion after each day of competition gives us a deeper understanding of each other’s roles, tying together the different aspects of the current competitive context. We discuss interpretations of the actions and the application of the rules and with such unified understanding we can translate everything for the judo public. This increases the quality of the judo presentation on the mat and brings a consistent understanding throughout the judo community.”

In Budapest our world champions are supported by experienced announcers, Giorgi Chanishvili and Tunde Fodor-Szurovszki and seasoned IJF commentator Sheldon Franco-Rooks. Our world champions will be back in action in Tokyo at the Olympic Games. 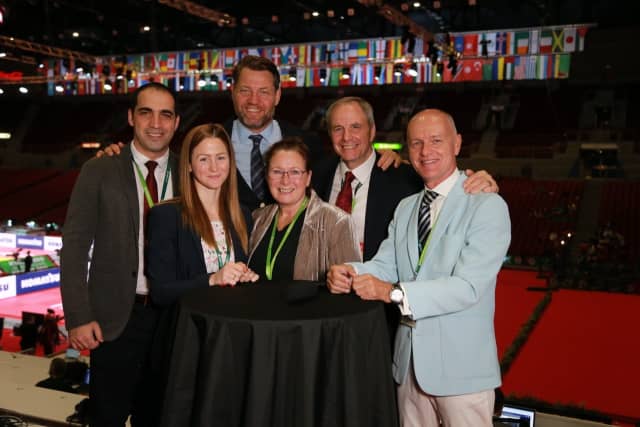