Written by Nicolas Messner on 13. Feb 2019
Share
For many centuries, almost unknown, the world discover the Land of the Rising sun in the second half of the 19th century. It must be said that the West was immediately fascinated by its artistic and historic dimension. The first explorers who came back from Japan described a country full of specific local characteristics and the difference between the cultures became a source of inspiration in literature, painting and architecture. 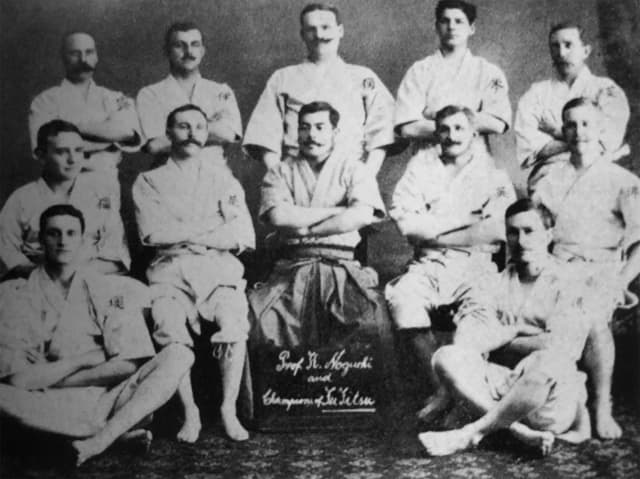 The vison of western artists was radically modified and influenced by the way nature and society was represented in Japan. Numerous painters like Claude Monet, Vincent Van Gogh, Edgar Degas, Jean Renoir, but also Alphonse Mucha, Gustav Klimt, Mary Cassatt or James Whistler and many more found in Japanese art a way to renew their technique and to see the world in a different light.

This strange and mythical country was not easily understood by the western mentality though and in a way the singularity of both the country and its people helped to idealize Japan.

But the curiosity for the Japanese world went beyond culture and art and after the Boxer Rebellion, the war between Japan and Russia changed the way the West looked on the Japanese. The first military successes, followed by the successive victories of Mukden and Tsushima in April 1905, reinforced the impression that the country had something special.

Everybody was amazed. At that time, the observers who commented on the Japanese success attributed it to the strong feelings of patriotism among the soldiers and to their training. They identified a rigorous moral code, the Bushido, and a very special physical preparation, jujutsu.

The Russian doctors, who came back from the battlefields, underlined their amazement after having seen so many soldiers injured with broken or disarticulated limbs. On the one hand Japanese people were known to be the most refined and close to nature people, and on the other hand were capable of military feats worthy of great power. In the turmoil of this time, the strength of modern Japan became a source of anxiety for the West. A new fear was born that the German Kaiser, Wilhelm II, labelled the 'Yellow Peril'. 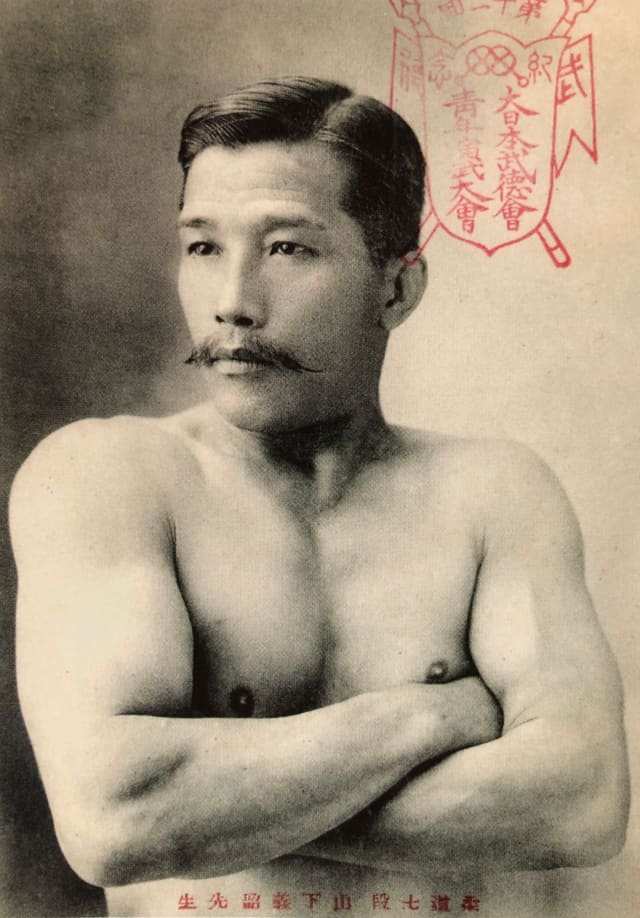 Yamashita Yoshitsugu, one of the "four guardians of the Kodokan“, a judo pioneer in the USA and the first judoka who was awarded 10th dan © The Kodokan Institute

Depicted as the triumph of skill and agility over brutal force, the Japanese style of wrestling was centered on the importance of yielding to the opponent and using his own strength against himself. The philosophy was that Intelligence and agility could overpower mere strength, the weak no longer had to surrender to the strong. Everywhere in the world, newspaper started to publish stories of its efficiency. They reveal the impact of jujutsu on the general public.

It is funny to see that adventure books and spy novels, heroes such as Sherlock Holmes, Nick Carter or Arsène Lupin could escape from complicated situations because they had mastered the art of jujutsu. In the United States, a comic strop in the Chicago Sunday Tribune in 1906, introduced the Kin-Der-Kids. Drawn by Lyonel Feininger, who was to be known as an impressionist painter, the character of Strenuous Teddy was the first comic strip hero who was a jujutsu expert.

Theodor Roosevelt, the President of the United States himself, was known for his interest and even passion for jujutsu. For three years, he regularly trained, notably under the supervision of a former student of Kano, Yamashita Yoshitsugu, who later became a 10th dan. For this occasion, one room in the White House had been turned into a dojo.

Because of the impact of the victories of the Imperial armies, Japanese instructors were invited to the most prestigious institutions. In West Point Academy, Annapolis Naval Academy and Fort Myer, the best Japanese experts trained cadets. The situation was similar in the French military school of Joinville, in Berlin's military school, in the naval academy in Argentina and in numerous other countries. Thus the army and the police contributed to the diffusion of the Japanese techniques, but that was mainly the case in a closed circuit. If the inclusion of jujutsu in the curricula of these famous institutions reinforced the reputation of efficiency of the Japanese method, it was still mysterious to the general public for whom it remained somewhat inaccessible.

Even though it was not very well known and rarely practiced, the new form of Japanese wrestling capture the imagination of the masses. The exoticism of Japan, the collective curiosity and the deadly efficiency of the Japanese method, the adoption of the practice by renowned military institutions, all this constituted a stable foundation. Kano and his disciples built on this ground in order to insure the diffusion of the Kodokan method throughout the world. 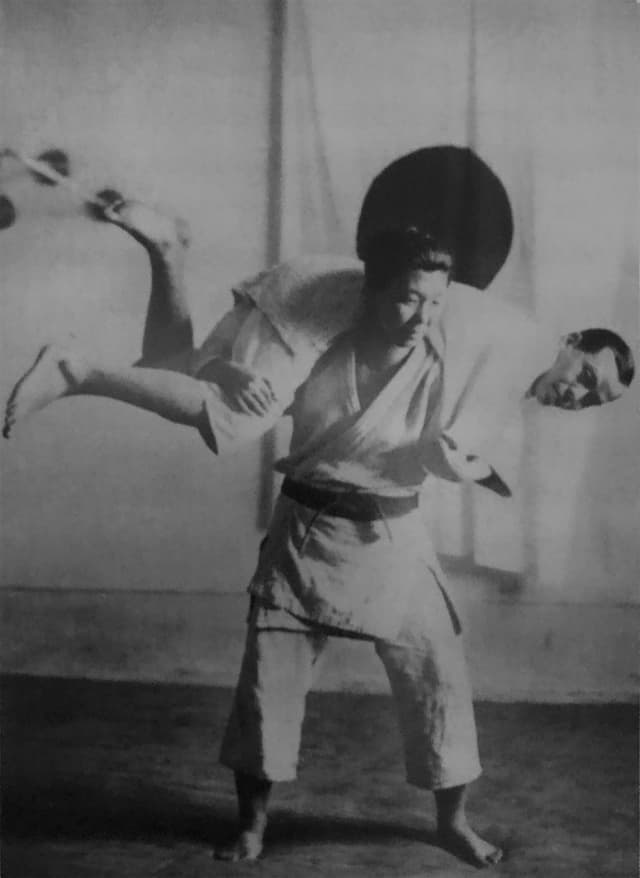 THE INVENTION OF JUDO IN THE WEST

Outside Japan, the spreading of Kano's method was closely linked to the Japanese diaspora. During the Meiji period, people had to abandon their land to work in mines or in new factories. Others chose to leave and they accepted working contracts in foreign countries. In the 1920s, Japan was going through social and economic difficulties to which were added a series of slumps and the violent 1923 earthquake with made 140 000 victims. The Americans continent meant new hopes for numerous Japanese. Several waves of intensive immigration occurred towards Hawaii and the West coast of the United States.

Rapidly the Japanese community became organized. Buddhist churches played a major part in the social organisation of Issei, the first-generation immigrants. Founded in 1899 the Young Men's Buddhist Association, an institution similar to the Young Men's Christian Association, was helpful in favoring social integration on the American soil and preserving the cultural heritage. But spiritual matters were not the only domain of the Buddhist churches. Numerous courses were taught such as floral arrangements, tea ceremony, poetry, cooking, theatre, and English lessons.

Basketball, baseball, kendo and judo were part of the sports activities. All these associations were useful in spreading sport, notably judo, inside but also outside the community. The Kano method was brought to the American soil by Issei as an efficient way of building bodies and minds and of passing traditions to young generations. For Japanese expatriate communities, judo served as a cultural shelter and a way to strengthen social ties. 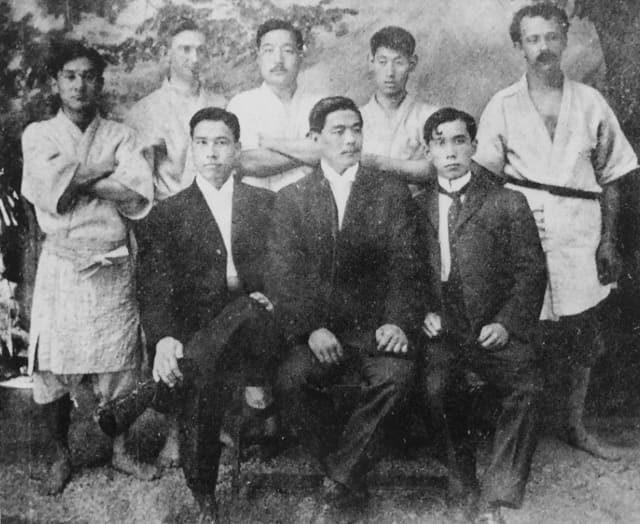 Maeda Mitsuyo (seated in center) in boston, 1905 (© The Kodokan Institute)

In Japan young judo players, readers of travel literature, dream of their elders who left to teach abroad. This is the case of a Kodokan 4th dan, Maeda Mitsuyo. The man was supposed to have won more than 2,000 professional fights. He became one of the judo globetrotters. His name can be found in many European countries and in Cuba, the USA and Mexico. However, his influence was of great important in Brazil where he went in 1914. His victories as a fighter and later his help to Japanese new arrivals in Brazil made him a prominent figure in the country.

Encouraged by the role model Maeda provided, an other Japanese judoka, Ishiguro Keishichi left Japan for Europe in 1924. In his memoirs, he related a decisive episode of his existence: “One day, I was drinking a beer in La Rotonde, a cafe in Montparnasse in Paris. A person called Dimitrescu introduced himself and said: ‘Would you like to come to Romania to teach judo?‘, ‘Certainly‘ I replied. Then he told me he wished to make his country more powerful and consequently he wanted judo to be introduced into the police and the army. 'Very well. let's go. I immediately accepted his invitation. I travelled during three days through Switzerland, Austria and Hungary to go to Bucharest, the capital of Romania. As the train reached the station, I noticed a crowd of generals wearing rows of glittering medals. I thought the generals of this country must adore decorations. Getting off the train, I asked people from the Japanese consulate: 'Are you expecting personalities today?' They answered: 'What do you mean? Everyone here came to greet you'“. Ishiguro added: “I left Japan with one suitcase. I went back with 35.”

As for Kano, he became a tireless ambassador of judo. He travelled Northern America, to support the development of clubs and yudanshakai, association of black belts; which were gradually created. Toward the end of the 1920s, Hawaii and Southern California first and then Northern California adopted local structures, closely linked to the Kodokan.

The founder of judo was equally busy in Europe where he intended setting top Kodokan branches. In London, Berlin and Paris, Japanese culture was greeted with enthusiasm. Judo started to be implanted in each one of these nations.