Written by Nicolas Messner on 19. Feb 2019
Share
From February 22-24, Düsseldorf will host the second Grand Slam of the season and of its history. Initially a Grand Prix, the event was upgraded last year for the first time. 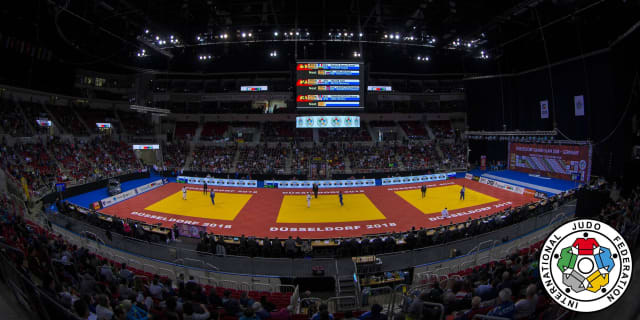 Düsseldorf is the capital and second-largest city of North Rhine-Westphalia, the most populous German federal state. It is also the seventh-largest city in Germany, with a population of more than 600,000 inhabitants. At the confluence of the Rhine and its tributary Düssel, the city lies in the centre of both the Rhine-Ruhr and the Rhineland Metropolitan Regions with the Cologne Bonn region to its south and the Ruhr to its north.

The IJF President, Marius Vizer, said: “The IJF World Judo Tour 2019 gathers pace this month with Germany the location for our second Grand Slam of the month and third event of the season (after Tel Aviv GP and Paris GS). Germany is one of the most famous legs on the IJF World Judo Tour and Düsseldorf was upgraded to a Grand Slam last year as it attracts the world’s top judoka and has a well-deserved reputation for being one of the highlights of the calendar.

Düsseldorf is a crucial stop on the road to the Games and also to the Tokyo 2019 World Judo Championships. Olympic and world champions will be in action in Germany and judo fans can look forward to a spectacular event.“

Peter Frese, President of the German Judo Federation, said: “On behalf of the German Judo-Federation (DJB) I would like to welcome you to the Judo Grand Slam in Germany. After 2018 we have the chance to host this amazing sports event in the world renowned City Düsseldorf for the second time. Athletes, coaches and spectators can look forward to a perfectly organized and exciting competition.“

Since last year, the ISS Dome is the new home for the Grand Slam and the perfect place for this tournament. The new competition hall offers more space and perfect conditions for a sports event and the DJB is proud to welcome all the delegations in one of the biggest sports halls in Düsseldorf.“

Frese also declared: “Our sport is well established in the state capital of North Rhine-Westphalia. Since last year we are part of the Grand Slam Series and the German Judo-Federation is proud to host this unique tournament. Carrying out the Judo Grand Slam 2019 means a great challenge for the DJB, the staff and the volunteers. But the whole team is well attuned and we will host a perfect competition.“

With Paris Grand Slam, which took place just a couple of weeks ago, and the road to Tokyo worlds and Olympics in full swing, the number of athletes who will participate in the event during the weekend is particularly high. The 5 continents will be represented and 683 athletes from 97 countries are registered. As the event is getting close, we will give you more information concerning the Düsseldorf Grand Slam. Stay connected.

Interview
Being a judoka in a Cricket Crazy Country

Interview
Siblings on the Tatami

Interview
The Cesar Judo Family: Competing Together and Traveling with the Baby