#IDSDP in Kilis: When Peace Really Means Something

Written by Nicolas Messner, Leandra Freitas on 06. Apr 2022
Photographs by Nicolas Messner
Share
For many years, the International Judo Federation (IJF) and its Judo for Peace Commission (JFP) have been active in the region of Kilis in southern Turkey. With the support of the Turkish Judo Federation (TJF) and the municipality of Kilis, more than 2,000 children have already benefited from the programme, with objectives to support refugees on the one hand and to develop a dialogue of peace between the different communities present in the region on the other hand. 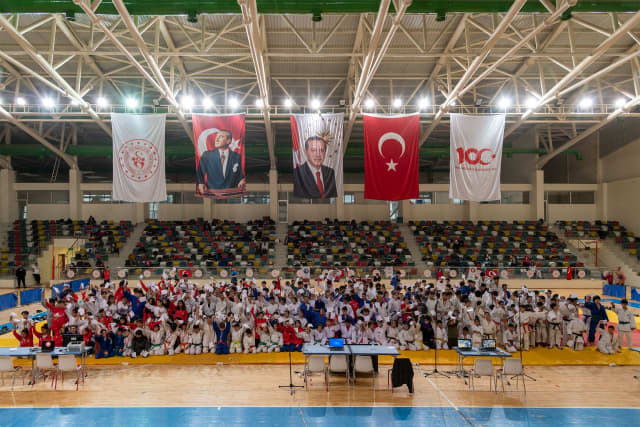 As part of the project, for two whole days, the first time m, 19 teams (15 Turkish teams, 1 Syrian refugee team and the teams from Azerbaijan, Georgia and Cyprus) were present in Kilis for the Judo for Peace tournament which ended on the day of the International Day of Sport for Development and Peace.

More than 400 children, led by their respective coaches, made the trip to Kilis, some coming from a great distance. Despite the fatigue and stress due to the trip, the atmosphere was incredibly positive among all participants. Beyond the medals won by some and the participation diplomas received by all, what we will remember above all is the harmony that reigned throughout the event.

On the spot the IJF was represented by Leandra Freitas (Judo for Children Commission) and Nicolas Messner (Judo for Peace Commission) while the TJF dispatched Mesut Kapan (TJF General Coordinator). 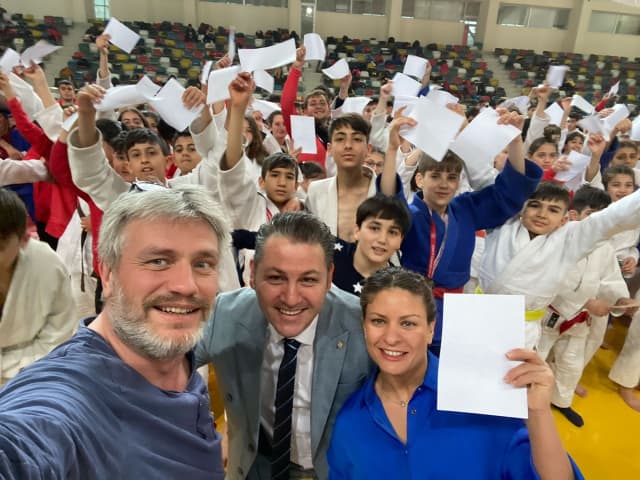 Mesut Kapan said, "This event is very important to promote peace. A lot of countries are facing important crises. They can be economical, political and social and war is present in many countries. I believe that the best solution for these challenges is sport and especially judo. There is no other sport right now in the region that has such an impact on the youth. 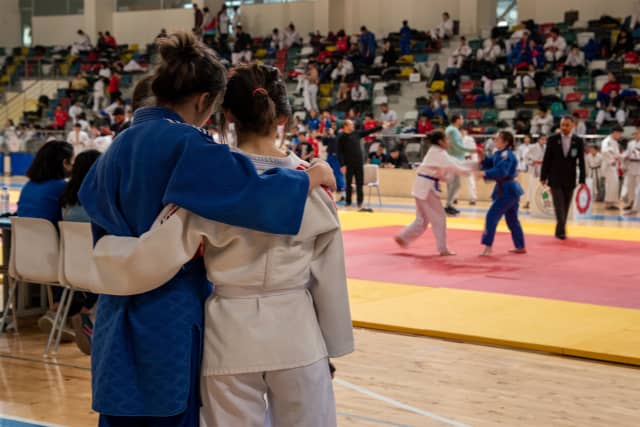 A child is a child. This is valid anywhere in the world. In recent years Turkey has welcomed more than 5 million Syrian refugees. The 42 present in Kilis for these days are the happiest children on earth. At least for a few days, they could forget about war. What the IJF and TJF have been doing in Kilis with the support of the local authorities over the past years is really good and we will continue. I urge people to not forget the situation of millions of children." 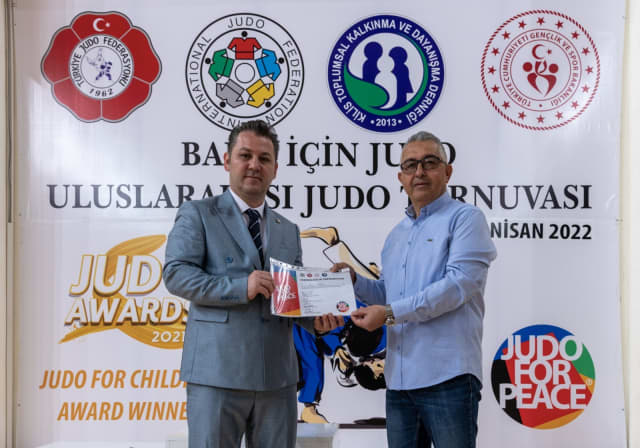 Hüseyin Erkmen is the President of the Kilis Social Development and Solidarity Association. He has been supporting the Judo for Peace programme for several years and was one of the protagonists of the success of the Judo for Peace tournament, "It is the first international organisation of this kind in Kilis. Our aim is to create and reinforce social cohesion between the nations. As a border city we are always in contact with refugees. Step by step we are organising big events. This would not have been possible without the help of the IJF and local organisations.

I want to thank IJF President Mr Marius Vizer and his team. Thank you also to the Turkish Judo Federation and the local organising committee and of course a big thank you to all the participants from the different cities and countries. We will keep preparing new projects to foster an ethos of inclusion and the promotion of peace." 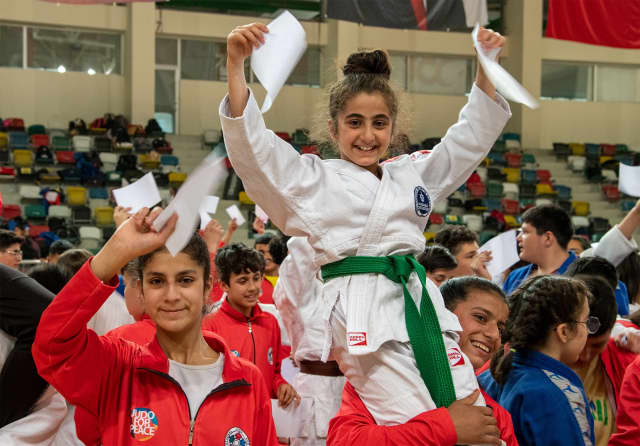 The event offered a great opportunity to join the global campaign to celebrate the International Day of Sport for Development and Peace. All the young participants raised their #WhiteCard to say that sport is an answer.

Hasan is twelve years old. He lives on the other side of the border, a few kilometres from Kilis. He is an internally displaced person, like the rest of his family. He had the chance to participate in the Judo for Peace tournament, "Judo has changed my life. I love judo and I like my coaches, who are teaching us the sport. This event is so important because I can learn and become stronger. The war in Syria is present since I was born. I saw it with my own eyes and I fled from my home city with my parents. I am now studying in sixth grade at school and I go to judo everyday. I escaped with my parents. My father now works in the police force so he can protect me and my family. My dream is to become a coach one day." 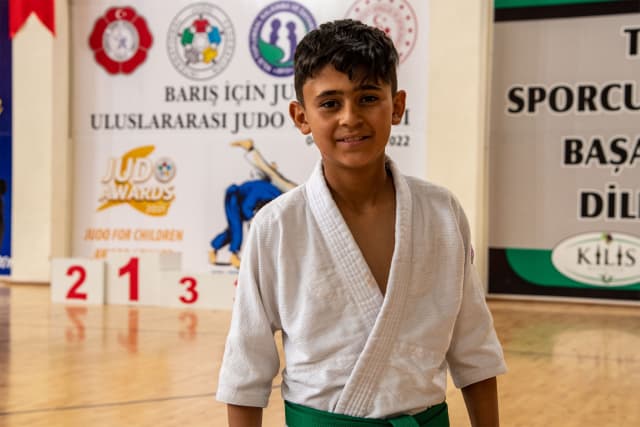 Khalid Alk Hatib is Hasan's coach, "Since the IJF came to visit us last year, there was a big impact, because it gave us a lot of hope and motivation to keep working. We saw that somebody cares about us. Since the visit the number of children has been growing non-stop. More than 200 children are now involved. The fact that the IJF came with Leandra, a woman, showed that girls could also have access to the sport and be included. This is very important." 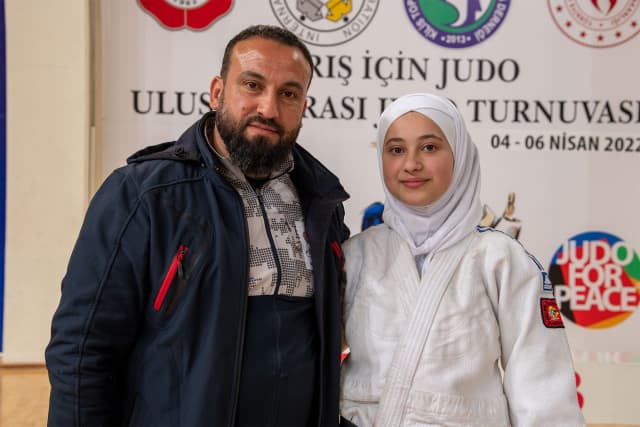 Coach Khalid with one of the female Syrian judoka

Nese Yildiz is a female Turkish coach. For her, "Judo is very important and benefits everyone, especially the youth. We are working together and we are very motivated to continue this project and organisation."

What happened during two days was about sport but it was way more than that. It was about peace and inclusion, but also friendship and respect. The future could be in good hands if those values continue to spread within the Syrian and Turkish communities. This is not a choice for all the stakeholders, all of whom are focussed on promoting a nicer future for the young generation, who will have to build and rebuild a better world. 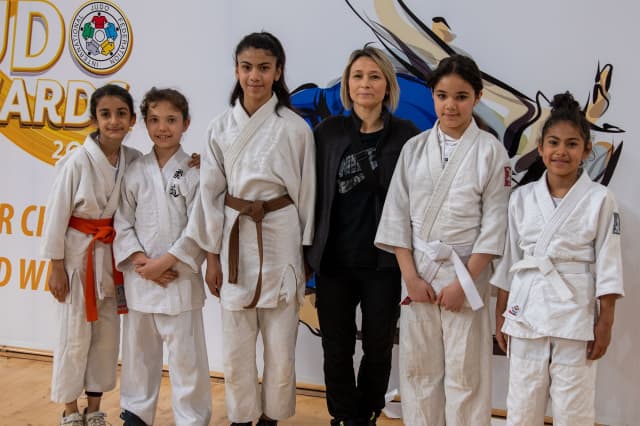