In Tunisia we have ideas

By Nicolas Messner on 18. Jan 2018
Share
The educational development policy of the Tunisian Judo Federation could be summed up as 'we do not have oil but we have ideas'. It must be emphasized that the political crisis the country has gone through in recent years has left its mark and economic resources are sometimes lacking. However, the leaders of the FTJ have resources to invent and find ways to make structured and effective developments. In the two days leading up to the Tunis Grand Prix, which launches the international judo season, an IJF delegation toured the judo clubs in the capital to learn more about judo's progress in the country.

Read the preview of the Tunis Grand Prix - CLICK HERE

While winter is hitting hard over Europe, all one has to do is cross the Mediterranean to enjoy the Tunisian tranquility, lively cafes and a welcoming, smiling population. The frank smiles, which are not a facade, can not yet erase the difficult years that Tunisia has just witnessed.

On January 14, 2011, the country switched to revolution and the great upheaval began. Against all odds, judo has nevertheless maintained its development and under the leadership of Judo President Skander Ashisha, it has even done wonders, such as the last bronze medal won by Nihel Cheik Rouhou at the Marrakech Open World Championships in late 2017 or the return of the Grand Prix of Tunis after eight years of absence on the national soil. 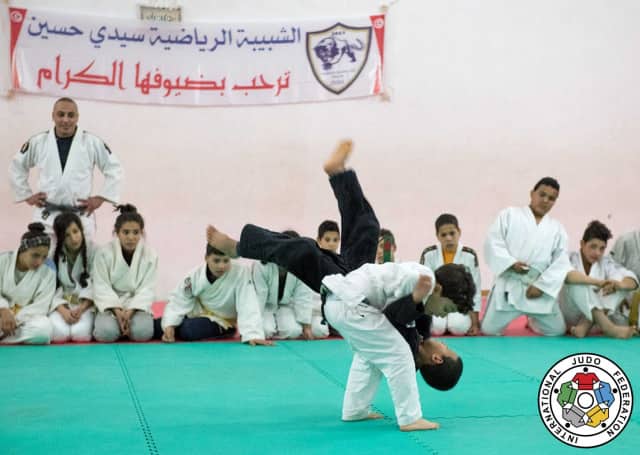 EDUCATION AS A LEITMOTIV
If there is one area where Tunisian judo has particularly developed, it is that of education. Kachouri Mongi, in charge of training and coaching at the FTJ explained: "We have a long-term goal. Thanks to the unfailing support of the International Judo Federation, we have been able to continue to work efficiently and develop many projects. Today we have programs adapted for each age category.

"Tunisia has an incredible strength: its youth. Of course, after the hardships we went through, on the one hand the revolution and on the other hand the terrorist attacks, this youth was destabilized. Thanks to sport and especially to judo, we can help our youngsters to recover."

The first visited club is located within a high school in the district of Sidi Hsin. A few years ago, this urban and agricultural area on the outskirts of Tunis was first and foremost known for its violence and juvenile delinquency, which found particularly fertile soil in the high population density. With more than 45 per cent of the population under 30 years of age, rampant unemployment and lack of resources, the youngest and the most vulnerable suffered the most.

Today Sidi Hsin no longer appears in the top 10 of the least popular places in Tunisia: "The development of a local police force on the one hand and sports and cultural activities for young people on the other hand helped us a lot, " said Boujah Kamel, Delegate and President of the municipality of Sidi Hsin. "We have a very diverse population and some neighborhoods are overcrowded. But this is also a strength. In our 19 schools, seven junior high-schools and three high schools, we have a dynamic youth on which we want to build the future. Judo gives them self-control. It also teaches them the challenges of life. It's a complete sport that develops flexibility, speed and intelligence. Moreover it is a relatively simple activity to organize which does not require a heavy structure. We have the potential," concluded Boujah Kamel. 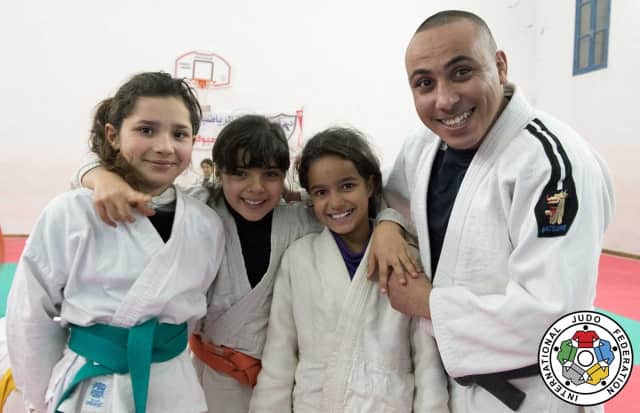 BACK TO MORE QUIET TIME
In a more peaceful atmosphere, judo holds the upper hand. Nearly 250 children regularly gather together on the tatami offered by the IJF to the Tunisian federation, which has found it appropriate to place them in Sidi Hsin. Well done! The smiles of children on the tatami and the medals won in regional and national championship by some of them and proudly exhibited during the visit of the IJF, are the proof. The participation of a young disabled person who is fully integrated into the judoka group is also a guarantee of a profound change of mentality in the society.

The educational program developed by the FTJ instills values that have been forgotten and it gives hope. Sidi Hsin is thus part of a development plan of much larger scale that spreads throughout the Tunisian territory. Initiated 10 years ago, it has only grown in recent years. The goal set by the national federation is simple and ambitious: "We want to offer all these young people the chance to achieve both a sports project and a study project," said Kachouri Mongi, before adding: "This is why, in partnership with the various institutions, we try to find the best time slots for the practice of judo without disrupting school rhythms. And it works. When we organize local competitions, it is not uncommon for us to have around 900 participants."

If everything is not always simple, the game is worth the effort. Four coordinators ensure at the national level the diffusion of a serious pedagogical knowledge, the contribution of the contents of the IJF Academy allowing moreover to optimize this sector. Sometimes the development is simply slower because of the lack of judogi in relation to the increasing demand for participation or because of the budget cuts related to the financial crisis that Tunisia is going through. But here people have ideas and judo continues to develop.

It is not uncommon to hear Tunisians say, "We must be patient. We have tremendous potential, and while it's hard to explain to youth that everything can not change in a day, we can really do it if we are united."

Unity, this is what transpired throughout the visits made on the sidelines of the Judo Grand Prix. The Tunisian Federation is united behind its President and its Executive Committee, behind its champions and coaches and behind the thousands of young judokas who dream of a better future. 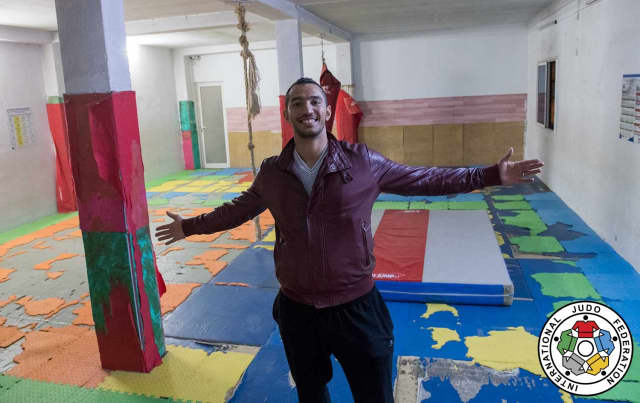 Above: Mohammed Fadhel Ghazouani in the dojo where it all started

THE GHAZOUANI FAMILY BELIEVES IN ITS LUCKY STAR
The father, Faouzi, and his two sons, Mohammed Fadhel and Mohammed Aziz, have been on the heels of the federation for a long time now and firmly believe in their lucky stars, judo, which can help to create a more just society.

Faouzi, a police officer, has founded several judo clubs since 1989. It was in his very first club that he one day saw a talented youngster enter the dojo. It was Anis Lounifi who, many years later, became World Champion in the -60kg category in Munich (2001).

Today the father and the two sons are at the head of Univers Ghazouani Gym in which they offer all kinds of sports activities, but in which judo, literally and figuratively, occupies the top of the building: "We began to settle on one floor of the building, then gradually we expanded and today we occupy the entire house. On the top floor, there was an open football field, we put a roof and turned it into a dojo," said the patriarch. A brand new dojo, fully financed from private funds, but whose operation is fully integrated into that of the federation. Moreover, Mohammed Fadhel is one of the four coordinators of the FTJ in the north of the country and his younger brother Mohammed Aziz will participate in the Grand Prix of Tunis this weekend, in -73kg.

The club is located in another sensitive area of the capital draining children from several areas known as 'hot'. But after less than three years of existence, it already counted more than 130 active members in 2017. "For now, we operate by word of mouth," said Mohammed Fadhel, "And we have many requests. We are already among the best clubs in the region in terms of results."

The most important aspect that Faouzi reminded us is the educational dimension: "We have an excellent reputation and it attracts people. Children and their parents are delighted with the work we do. We started from scratch, but with a lot of will and passion, we are now able to offer very good training conditions in which our youth flourishes."

The Ghazouani family could have improved the other sports facilities, but their love for judo prevailed and what they want above all to convey is the ethics of sport as well as respect for others and self-respect. Those values have a real role to play in a changing society.

If in Tunisia there is no oil, it is certain that there are ideas, many ideas and some are changing deeply the life of a youth in search of a brighter future.